From Field and Stream to Table

Foodies turn to hunting and fishing for the ultimate sustainable protein 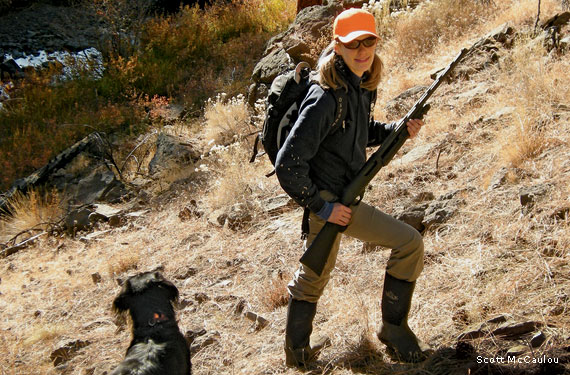 Urbanite turned rural locavore who harvests her own food, Lily Raff McCaulou and her retriever hunt chukar in eastern Oregon.


LILY RAFF MCCAULOU KNOWS SHE'S AN IMPROBABLE HUNTER. The thirtysomething environmentalist grew up near Washington, D.C., petrified of guns, and had resented hunters ever since sobbing through Bambi as a little girl. She’d never even met any hunters until she left the East Coast to work for a rural newspaper in Bend, Oregon. There, hunters’ intimate knowledge of local flora and fauna surprised her. “I found myself having respect for people who did something I’d always villainized,” says McCaulou.

She wondered what it would be like to see the land through a hunter’s eyes, to step into the food chain and track down her own dinner. A decade later, McCaulou—author of the memoir Call of the Mild—embodies a new breed of hunter. They hunt to reconnect with nature. They hunt to harvest sustainable wild meat by filling in for predators that once controlled prey populations. Some even target invasive species such as lionfish and feral boars that threaten native ecosystems.

Such conversions may not sit well with some vegetarians and animal lovers. But ecologically minded “locavore” hunters, driven by an appetite for local, sustainable, healthy food, are finding common ground with traditional hunters—the primary source of state conservation budgets—through a deep love of the land. They’re also changing the way urban environmentalists think about hunting and opening the door to an alliance that America’s conservation pioneers had always envisioned: hunters and non-hunters joining hands to protect our natural resources.

Data tracking hunters’ motivations are scarce, though a 2013 survey by the Responsive Management research group reported that 68 percent of respondents hunted to procure a “local, natural or green food source.” The survey also found that among seven states with the largest increases in hunters between 2006 and 2011, 56 percent said they hunted for food.

Many locavore hunters also see the pursuit of wild game as a more humane, ecological alternative to factory-farmed meat. Factory-farm operators can cram hundreds of thousands of hogs or cattle into a single facility that generates more than a million tons of untreated waste a year. Mountains of manure from such confined-animal feeding operations foul the air, seep into groundwater, release greenhouse gases and may expose consumers to foodborne pathogens such as Listeria, which prompted the recall of more than 47 million pounds of meat and poultry in May.

“A pig that’s wandering the forest eating acorns is much healthier than one eating corn or mush,” says chef Daniel Klein, who produces a documentary series called The Perennial Plate. He says some chefs would love to offer locally harvested wild game, but no one does because they’d need a federal food inspector to monitor every hunt.

Cornell University nutritionist Moira Tidball had always suspected the game her husband brought home was healthier than supermarket meat, but she couldn’t find the data to prove it, so the couple collected their own. They tested wild brook trout, ruffed grouse and Canada goose, all native in New York. Sure enough, the wild species had up to 50 percent less fat, fewer calories and higher mineral content than their farmed counterparts.

McCaulou, a longtime meat eater and environmentalist, sees hunting abundant wild species close to home as the epitome of ecologically responsible meat consumption. So do some former vegetarians. Tovar Cerulli was a vegan when he found out the local organic farmer shot deer and killed woodchucks with toxic smoke-bombs to protect his fruit and vegetable crops. So much for vegan purity, Cerulli thought. When his health started to fail about 15 years ago, he started eating fish and chicken, but felt guilty about leaving the killing to someone else. So he took up fishing, which he’d done as a child, then eased into hunting, a journey he recounts in The Mindful Carnivore. 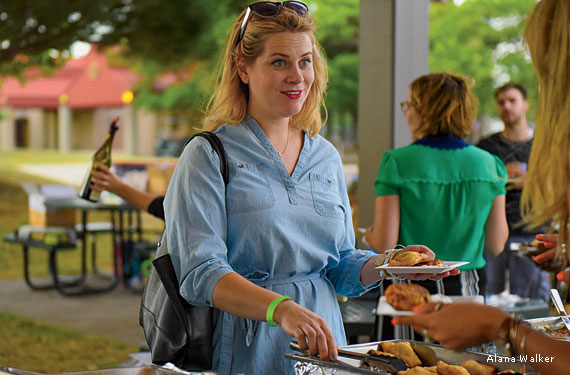 Eager to know what motivated other “adult-onset hunters,” Cerulli interviewed two dozen men and women for his master’s thesis. Many considered hunting a natural extension of gardening, keeping bees and raising chickens. “People are hungry for a sense of connection with the natural world, with their food, with their primal heritage as human beings,” he says. “They want to take responsibility for the ethical reality of taking life directly.”

Across the country, most states and several nonprofits, such as Becoming an Outdoors-Woman, offer hunter education classes and workshops for locavores who want to learn to harvest their own game. This new crop of hunters could bolster flagging revenues for state wildlife agencies, which fund science-based conservation through hunting and fishing license fees and taxes on gear.

Some conservationists see an even bigger opportunity. Hunters and anglers were among the first to recognize the need to protect wild lands but knew they couldn’t do it alone. “They understood the absolute necessity for unity ... in supporting conservation,” says Cerulli. The new breed of locavore hunters just might help environmentalists and traditional hunters look past any differences to build a sustainable future together.