Life in the Litter

The dead leaves, dried stems and yard debris of winter sustain a host of wildlife species. 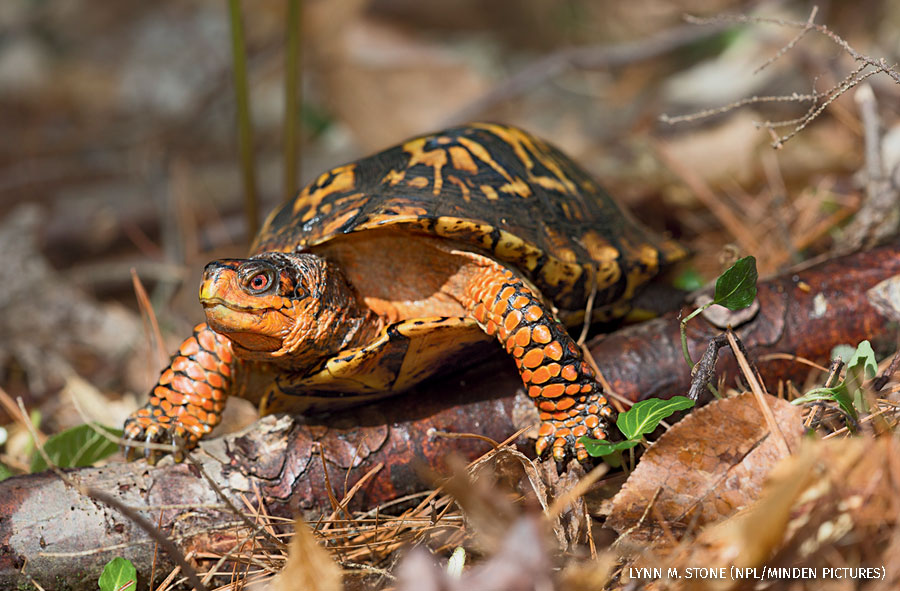 A male eastern box turtle clambers over leaves and debris in Connectecuit. Box turtles—as well as some insects, amphibians and rodents—will forage for food in the litter during much of the year then burrow underneath the debris in winter.

IT IS THE DEAD OF WINTER. In many parts of the United States, skies are gray, temperatures are plummeting, and you may think there's nothing living in your dormant backyard. But within the fallen leaves, tree bark, downed logs, soil and dried seed heads of your garden thrives a complex community of animals that are adapted to waiting out the cold.

From small centipedes, spiders, beetles, earthworms, slugs and moth pupae to larger frogs, salamanders, snakes and box turtles to even bigger foxes and bats, a myriad of creatures depends both on the soil and on the ground cover above it throughout the winter.

Just a few inches below the soil's surface, for example, many small insects go into a hibernationlike state called diapause, lying dormant until the ground warms. Moths undergo a full transformation: In autumn, "94 percent of moths drop off the tree when they develop as larvae," says University of Delaware entomologist Doug Tallamy. The insects land under the cover of leaves, bark and soil and pupate in cocoons, emerging as adults the following spring.

For amphibians—many in decline —yard cover is crucial. “Leaf litter helps amphibians retain proper moisture levels and provides protective habitat,” says Christopher Petersen with DoD Partners in Amphibian and Reptile Conservation. Some of these animals will burrow into the muddy bottom of backyard ponds, breathing through porous skin.

Reptiles also seek shelter to protect their cold-blooded bodies during their dormant months. Snakes take refuge in abandoned mammal dens, while some turtles and tortoises dig their own hideouts. “Box turtles are one of the more common and charismatic backyard species,” says Petersen, “and they typically dig into the leaf litter and soil for cover.”

Most backyard mammals also tend to hibernate. Chipmunks, voles and other small rodents find spots in open logs, insulating them with plant material such as milkweed seeds. Bigger mammals, including groundhogs and foxes, build dens, rarely moving for months. Even bats use ground cover during the winter: When temperatures drop below freezing, eastern red bats dive underneath leaf litter for extra warmth.

So while your yard may look “dead” in winter, it sustains a host of creatures when you leave leaf piles, flower stalks and other debris in place. “If you want to help animals in winter,” says National Wildlife Federation Naturalist David Mizejewski, “let your yard be as natural as possible.”