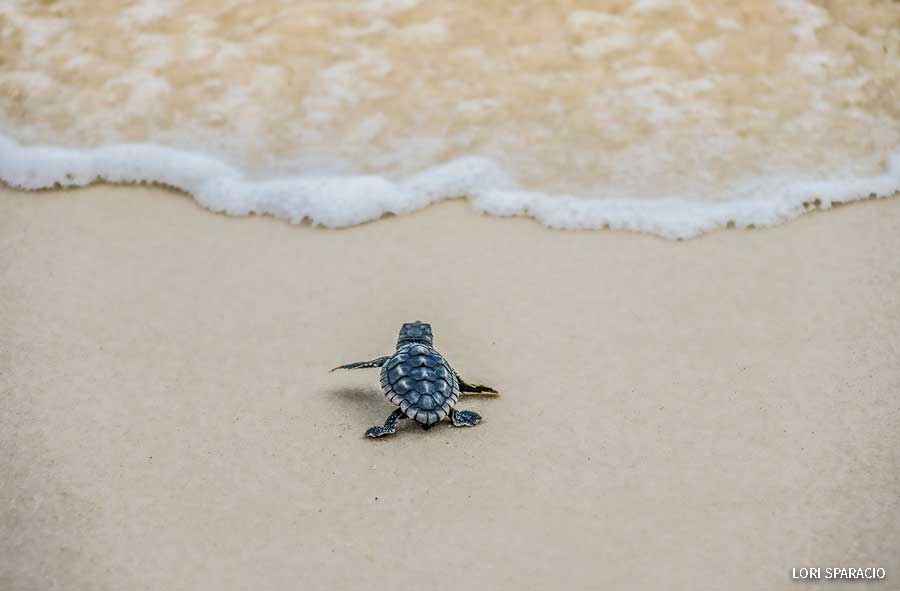 A loggerhead hatchling heads to the sea on Alabama’s Gulf shore, where thousands of sea turtles nest each year.

SUZI FOX KEENLY REMEMBERS learning of the Deepwater Horizon disaster. “I felt the life drain out of me,” says Fox, executive director of Anna Maria Island Turtle Watch, a Florida conservation group. Her heart broke for the people affected and “for all the wonderful animals that died.”

Those deaths included thousands of loggerhead sea turtles, a species federally listed as threatened since 1978. Based on data from animals observed in the spill zone, researchers estimate that nearly 30,000 loggerheads were exposed to oil from the well blowout, with half of those even lightly oiled perishing as a result.

For more than 2,000 heavily oiled turtles, overwhelming contamination made swimming and feeding difficult or impossible and caused dangerous overheating. Inhaled and swallowed oil interfered with breathing and digestion, a certain death sentence for those unluckiest of loggerheads.

Nesting areas were fouled by oil, then further disturbed by machinery used for cleanups. In the breeding season following the spill, loggerhead nest densities on northwest Florida beaches fell more than 40 percent.

But much of the Gulf has become safer for loggerheads. In 2014, the National Oceanic and Atmospheric Administration (NOAA) designated more than 270 miles of Florida, Alabama and Mississippi coastline—along with thousands of square miles of open water where young turtles grow and adults hunt—as critical habitat for this protected species. Investments from disaster-recovery trust funds have helped deploy more-effective and widely used turtle excluder devices to reduce bycatch deaths in commercial fisheries. And local efforts also are helping. Anna Maria Island’s Turtle Watch program is teaching people living near nesting beaches to dim lights that can disorient turtles, and the Alabama Coastal Foundation’s Share the Beach program enlists volunteers to help hatchlings reach the sea.

Such steps are promising, yet NOAA scientists say sea turtle populations will need decades to recover from the 2010 catastrophe, making future spills all the more ominous.