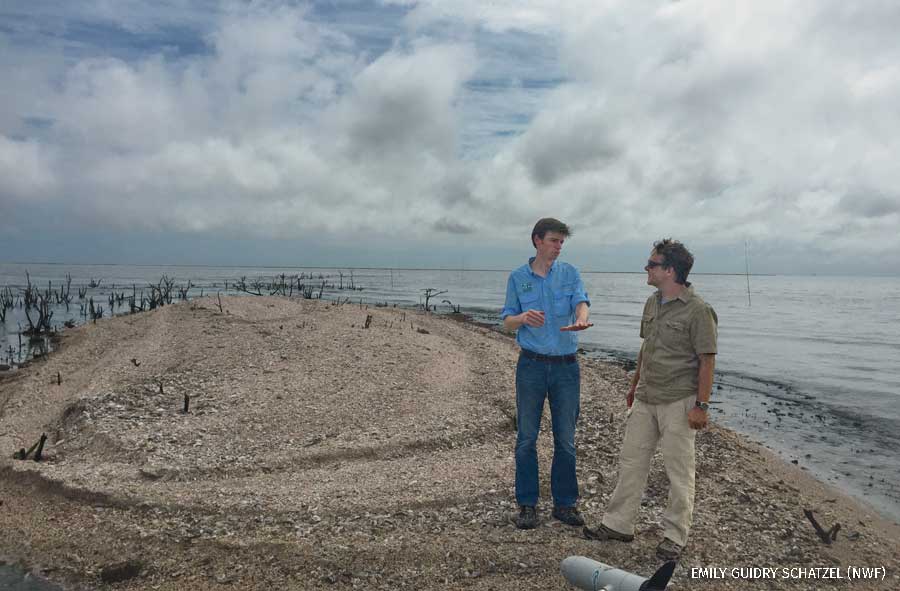 IT'S HARD TO BELIEVE  that it has been 10 years since the world watched in horror as 134 million gallons of crude oil spilled into the Gulf of Mexico over 87 days. The shock of the Deepwater Horizon disaster sickened us as heart-wrenching images of oiled pelicans, dolphins and sea turtles surfaced. But the National Wildlife Federation sprang into action immediately. With staff already in Louisiana working to restore the Mississippi River Delta, we partnered with government officials and the news media to engage the rest of the country to help the people, wildlife, places and small businesses hardest-hit by oil.

Our members and supporters responded in force, donating millions of dollars to restoration, which allowed our Federation and its affiliates to tackle natural-resource problems from Florida’s Key West to the Rio Grande in Texas. While the spill was a blow to the vital Gulf ecosystem, it was clear that deeper, preexisting challenges could also be addressed by our response.

Those challenges include threats to Florida’s waters from pollutants that trigger toxic algal blooms rendering beaches and estuaries unfit for people and wildlife. Oyster production is collapsing from Apalachicola to Galveston, and marshes in Louisiana and Texas that support some 5 million wintering waterfowl are drowning due to rising sea levels and scant sediment deposition.

Today we are seeing the fruits of years of hard work by our team and partners—and there are abundant signs of hope. Billions of dollars in spill-related fines and penalties have fueled the meaningful implementation of restoration plans across the Gulf, and bipartisan actions have jump-started a long-stalled Florida Everglades recovery plan. We’re building on these successes—ensuring that there’s sufficient clean water for manatees in Florida and whooping cranes in Texas, for reconnecting the Mississippi River with its Louisiana wetlands and for protecting key habitats in Alabama and Mississippi.

A healthy Gulf of Mexico is essential to conserving America’s natural heritage. It’s why we were in the Gulf long before the oil spill and why we’re working harder than ever now. We can never again allow ourselves to be lulled into a false sense of complacency when we see clear waters off Gulf shore beaches or ample numbers of fish and shrimp thriving in the Mississippi River Delta and the waters beyond. We will do what is necessary to ensure that the entire Gulf is more resilient than ever so future generations of wildlife and people can enjoy this national treasure.