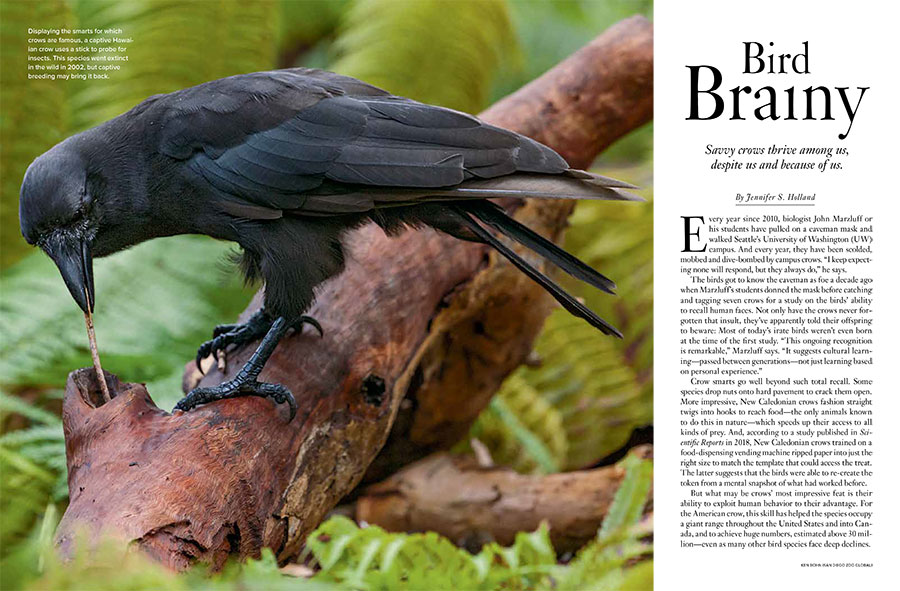 Displaying the smarts for which crows are famous, a captive Hawaiian crow (above) uses a stick to probe for insects. This species went extinct in the wild in 2002, but captive breeding may bring it back. A fish crow (below) in Florida cleverly accesses food from a dispenser. Surprisingly savvy—and adaptable—some crows can recognize human faces and teach their young what threats to avoid. (Photo above by Ken Bohn/San Diego Zoo Global)

EVERY YEAR SINCE 2010, biologist John Marzluff or his students have pulled on a caveman mask and walked Seattle’s University of Washington (UW) campus. And every year, they have been scolded, mobbed and dive-bombed by campus crows. “I keep expecting none will respond, but they always do,” he says.

The birds got to know the caveman as foe a decade ago when Marzluff’s students donned the mask before catching and tagging seven crows for a study on the birds’ ability to recall human faces. Not only have the crows never forgotten that insult, they’ve apparently told their offspring to beware: Most of today’s irate birds weren’t even born at the time of the first study. “This ongoing recognition is remarkable,” Marzluff says. “It suggests cultural learning—passed between generations—not just learning based on personal experience.” 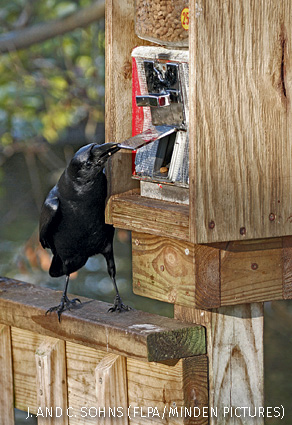 Crow smarts go well beyond such total recall. Some species drop nuts onto hard pavement to crack them open. More impressive, New Caledonian crows fashion straight twigs into hooks to reach food—the only animals known to do this in nature—which speeds up their access to all kinds of prey. And, according to a study published in Scientific Reports in 2018, New Caledonian crows trained on a food-dispensing vending machine ripped paper into just the right size to match the template that could access the treat. The latter suggests that the birds were able to re-create the token from a mental snapshot of what had worked before.

But what may be crows’ most impressive feat is their ability to exploit human behavior to their advantage. For the American crow, this skill has helped the species occupy a giant range throughout the United States and into Canada, and to achieve huge numbers, estimated above 30 million—even as many other bird species face deep declines.

During decades of conducting his own crow studies, Kevin McGowan of the Cornell Lab of Ornithology also became well known to the birds. “They could pick me out on a campus of 20,000 people,” he says. “One peanut hound knew my car and would catch up and hover over me as I drove away, knowing I would turn back and feed him.”

So how do they do it? Brain imaging studies reveal that, like us, crows use complex visual sensory systems to recognize faces and that both expectation and emotion affect their responses. “These birds have been paying attention to humans for a very long time,” says McGowan. “After all, 50 years ago [when it was legal to shoot them], it paid for crows to know the difference between a farmer with a rake and a farmer with a gun.”

Alas, sharp wits have not kept some of the world’s 40 crow species from becoming endangered. Mariana crows in the South Pacific, for example, have been driven to the edge by invasive brown tree snakes, and the Hawaiian crow was declared extinct in the wild in 2002, though some captive-bred individuals have been reintroduced to the island with fragile success.

The most abundant of North America’s four crow species, American crows (in Idaho, above) often mass together in noisy flocks that can, during roosting, number in the hundreds of thousands. These omnivorous birds have retained huge numbers, topping 30 million, even as many other of the continent’s bird species decline.

Of the four North American species, American crows are by far the most common. They breed cooperatively, meaning offspring help raise younger siblings. They also stay in family groups of up to 15 birds for years, work together to scare off predators and roost in cacophonous flocks, sometimes numbering in the hundreds of thousands. Those noisy gatherings appear to be vital to the birds’ social relationships. “There is probably a lot being said,” says Marzluff, who likens the activity to “a bar scene where there are lots of individual conversations and a few boisterous, ‘Hey, I’m over here!’ calls as new folks come into the party. But what they’re actually talking about we really don’t know.”

What is known is that crows learn extensively from one another. “Crows believe each other when one says something is bad,” says McGowan. “You rarely see a dead crow on the road [because] mothers teach their offspring: ‘That car was too close!’” UW’s Kaeli Swift studies crow “funerals,” in which birds swarm over a dead comrade and sound an alarm, signaling potential danger—such as a predator—to the rest of the flock. The warning, Swift says, makes nearby birds wary of the dead animal, its resting place and anyone spotted handling it.

Anecdotal evidence suggests that crows share in another way—with us, this time—leaving “gifts” such as rocks, wrappers and bottle caps for those who treat them well. “It may be simply that the crows are playing with objects that they drop in order to feed,” says McGowan. But some researchers believe the gifting, often around bird feeders or window sills, is more purposeful, akin to “thanks.”

As adaptable as they are, do American crows even need the wild? “Not really,” notes ecologist Andrea Townsend of Hamilton College in New York. While some other corvid species need more-natural landscapes, “an American crow can live in a suburban environment its entire life as long as there are trees for perching and nesting and open space—which can be a grassy lawn, a golf course or a cemetery.” The birds will happily eat from trash bags as part of their omnivorous diet (which includes seeds, berries, insects, carrion, eggs and small animals) and roost in yards and parking lots. “We’ve greatly modified the landscape to their liking,” says Marzluff. “We’ve been the ultimate gift for the crow.”

Of course, “not everything we do is good for them,” notes Townsend. “Interacting with people can be stressful, plus urban areas tend to be polluted—with toxins, noise and light. [Such stressors] can increase animals’ susceptibility and exposure to diseases like West Nile virus,” especially as crows and disease vectors such as Culex mosquitoes live in higher densities in peopled areas.

Our neighborhood crows’ penchant for junk food may also prove a problem, according to scientists studying how the U.S. diet affects these opportunistic birds. Although pizza and popcorn may help the birds pack on weight when they need it, such snacks have also been shown to raise birds’ cholesterol. More pressing, “because crows share the dirtier parts of our environment, foraging in our trash, at compost piles and at dumps,” Townsend says, many carry the foodborne pathogen Campylobacter, which causes gastroenteritis in humans. Crows she studied with the infection were “skinnier—with lower survival.”

Emerging infectious diseases, which are shifting their reach as the climate warms, concern her most. Dead birds Townsend has autopsied “rarely died of just one thing; they had pneumonia and pox and West Nile. We don’t know which came first, just that the bird was compromised and got secondary infections that pushed it over the edge.”

On a positive note, American crows are more flexible in their movements than most birds. Some migrate—mainly those living in Canada—and some don’t. Those that do, while faithful to their northern breeding grounds, may adjust their winter destinations depending on resources and weather. Being less fixed in their migratory routes “should buffer them as the climate changes,” Townsend says.

Meanwhile, American crows, at least, continue their tight relationship with humans. As for Marzluff’s irate campus crows, only two birds from the original cohort remain, he says, “so when they’re gone, it will be interesting to test the flock one more time with the caveman mask.” His best guess? “They’ll still be unhappy to see that face.”

A frequent contributor, Jennifer S. Holland wrote about dragonflies in the April–May 2020 issue.

Crows Can Distinguish Faces In a Crowd »
Blog: 8 Wild Creatures That Use Tools in Extraordinary Ways »
Blog: The Most Fascinating Things About Halloween's Scariest Creatures »