Scientists have recorded apparent acts of kindness among animals ranging from primates to birds, bats and insects—but are such behaviors truly altruistic? 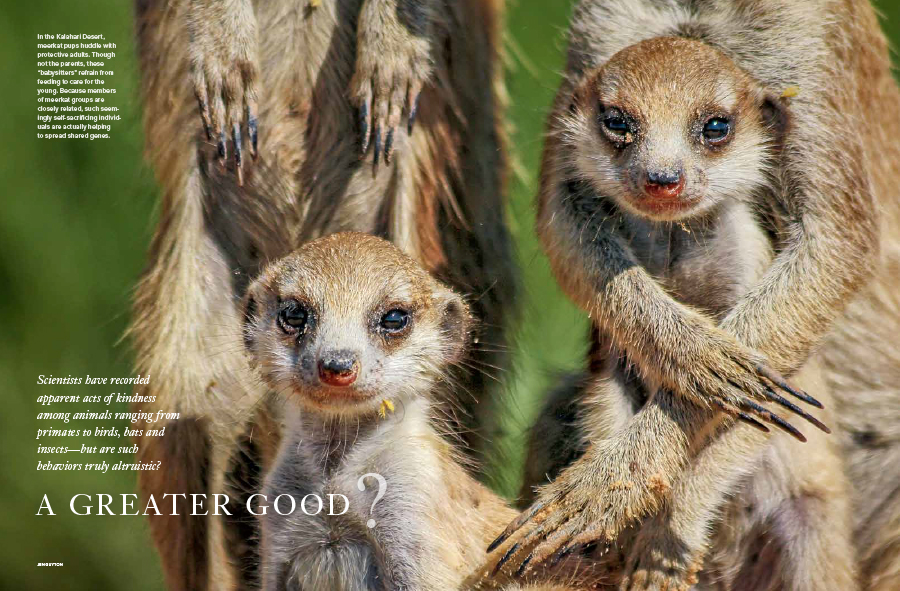 In the Kalahari Desert, meerkat pups huddle with protective adults. Though not the parents, these “babysitters” refrain from feeding to care for the young. Because members of meerkat groups are closely related, such seemingly self-sacrificing individuals are actually helping to spread shared genes. (Photo by Jen Guyton)

NANCY BLACK WAS PILOTING a whale-watch boat in Monterey Bay in 2016 when the marine biologist spotted what looked like an act of interspecies heroism. A half-dozen killer whales, also called orcas, were hunting a sea lion: leaping from the water, pouncing on their prey, then ramming it with their heads and slapping it with their flukes. It was a prolonged attack, possibly to show a juvenile the ropes.

From the boat, Black heard a loud trumpeting sound and watched as two humpback whales charged into the fray. They pushed away the predators and broke up the hunt. The sea lion escaped. The killer whales swam off.

Black, who heads the nonprofit California Killer Whale Project, followed the orca family along the edge of the bay’s underwater canyon. A couple of miles later, they came upon another sea lion. They pounced again, only to be thwarted by a different group of humpbacks. Then it happened a third time. “And that was it,” she said. For the rest of her watch, “the killer whales did not try for another one.”

What was going on? Breaking up a hunt risks injury and steals time away from feeding. Yet this behavior is quite common among humpbacks, which have also saved seals and gray whales. They don’t eat these prey animals, so they’re not competing directly with the orcas.

Researchers don’t know for sure. But in a 2017 paper, published in the journal Marine Mammal Science, Black and 13 colleagues suggested the behavior could be a form of altruism, the impulse to help others even at personal risk.

Humpback whales (above, foreground) have been known to help other species, such as this sea lion (on ice floe) being pursued by a killer whale (background). Chimpanzees, our closest animal relatives, frequently make sacrifices to help one another. One pair (below) shares fruit in Tanzania’s Gombe National Park.

Scientists have long been fascinated by altruism—and have chronicled it in creatures ranging from insects to primates. “There’s an idea that goes all the way back to Darwin that you can see the roots of morality, you can see the roots of our kindness, in other animals,” says Duke University anthropologist Brian Hare. “It ends up that friendliness, kindness, helping others is a wonderful strategy for survival.”

But there are caveats. Kindness is not the same as selflessness. Altruism means different things to different scientists. And what looks on the surface like a friendly act might be more complex and, possibly, not altruistic at all.

The problem starts with language. “People totally disagree about what should count as altruism,” says Gerry Carter, a behavioral ecologist at The Ohio State University. This much is certain: Altruism requires sacrificing something—food, for example, or the chance to reproduce—to benefit someone else. Often it’s a one-way sacrifice. Among Florida scrub-jays, for example, adult “helpers” will forego mating in order to guard and feed someone else’s young.

In other species, the sacrifices and benefits flow back and forth. Some scientists call this “reciprocal altruism.” Carter, for example, studies common vampire bats, 3-inch-long mammals ranging from Mexico to Argentina, both in the laboratory and in the wild. Feeding on blood from livestock such as horses and cows as well as wildlife such as deer, pelicans and mountain lions, the bats can live up to two decades. But a constant supply of blood is essential: Researchers in the 1970s revealed that the animals cannot survive more than 70 hours without it.

That’s where reciprocity comes in. Many vampire bats form mutual-aid networks to share regurgitated blood when an individual misses a meal. “The relationships between these bats are more like friendship than, say, a business relationship,” says Carter. “It’s not a strict tit-for-tat exchange.” Instead, the bats seem to have long-term memories that allow them to build stable connections and balance out the sharing over time. 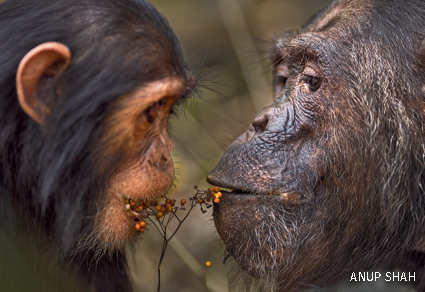 Sharing entails real cost. “Blood is precious,” says Gerald Wilkinson, an evolutionary biologist at the University of Maryland who studied vampire bats in Costa Rica. “It’s not something you want to just give away lightly, because I think there is a risk of then putting yourself closer to the edge.” In one extreme case, he observed a male who gave away blood repeatedly until he starved to death.

But the payoff is a system that usually gives everyone a better shot at survival. “If you ask, ‘Is that single event altruistic?’ I’d probably say yes,” Wilkinson says. “I mean, they’re giving away a meal that they could use themselves. But over a longer time frame, if they were not part of a group that was doing that, they would likely die.” Vampire bats avoid flying when the moon is up, possibly to dodge predation by owls. Some of them, then, miss the chance to feed. “That creates the pressure for sharing,” he says.

When altruism flows in one direction among kin, as in Florida scrub-jays, scientists often attribute it to something called “kin selection.” An animal will sacrifice its own well-being to help a family member pass on their shared genes. The closer the relative, the more common DNA, and thus the more evolutionary pressure to sacrifice.

Tim Clutton-Brock, a behavioral ecologist at the University of Cambridge, distinguishes between “regular” altruism, which happens day in, day out, and one-off events such as dolphin rescues of human swimmers. “We’ve not seen regular altruism in groups of unrelated individuals,” he says.

In the Kalahari Desert, Clutton-Brock studies meerkats, insectivorous mongooses of southern Africa. In a group of meerkats—generally 10 to 50 individuals—a single couple breeds most of the pups. The other adults help raise them, sharing up to 40 percent of the prey they catch with the young. And while others forage, they “babysit” the birth burrows to guard against threats such as snakes. “A babysitter doesn’t feed for a day at a time,” Clutton-Brock says. “They lose about 2 percent of body weight during that time. That’s a very substantial energetic cost.”

Meerkats are what Clutton-Brock calls “indiscriminate altruists.” In a 2019 article published in The American Naturalist, he and his doctoral student Chris Duncan explained that the animals don’t single out their nearest kin for extra help. That hardly matters, though, because the whole group is closely related. By feeding and babysitting someone else’s pups, the meerkats help perpetuate shared genes.

Altruism also offers protection from enemies. “Groups are territorial and compete with each other,” Clutton-Brock says. “Bigger groups win in those interactions. So if you want to stay safe … you need to maintain the size of your group.”

Common vampire bats (above) form networks to share regurgitated blood when an individual misses a meal. These relationships “are more like friendship than, say, a business relationship,” says a researcher who studies the bats. “It’s not a strict tit-for-tat exchange.” In a less-extreme form of what researchers call “reciprocal altruism,” northern bald ibises (below) regularly trade the role of lead bird when flying in V-formation.

With nonhuman primates, we see parallels to human kindness. Our closest cousins, chimpanzees and bonobos, do favors to build or maintain relationships with nonrelatives. “The typical explanations of kinship and reciprocity—they’re good explanations, but sometimes they don’t work,” says Frans de Waal, a biologist who worked at Emory University’s Yerkes National Primate Research Center.

Chimpanzees form “friendships,” de Waal says, and help friends at their own peril. They might hear another chimp scream and know there’s a leopard nearby. “And they chase it off,” he says, “which is extremely risky business. I’m not sure they ever can expect anything back of the same kind.”

At the Yerkes Center, the biologist recalls, there was an elderly, nearly blind chimpanzee named Peony who had trouble walking because of arthritis. When young females saw her hobble toward a distant faucet, they raced ahead, gulped water without swallowing and returned to spit it into Peony’s mouth. “There was nothing she could do for them that was useful,” he says. “It was purely out of respect, I think, and love.”

Bonobos go further: They make sacrifices to help others outside their social circles. Hare has studied the primates at a Congolese sanctuary for orphans of the bushmeat trade and at a reserve where the orphans are released into the wild. In one experiment, conducted with his then-student Suzy Kwetuenda, captive bonobos were given a choice: They could either monopolize a pile of fruit or share it with an unrelated bonobo by unlocking a door between their rooms. The animals chose to share, as they often do in the wild. 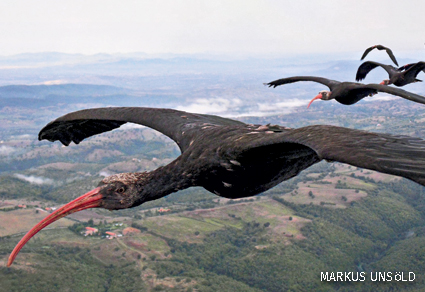 “They have a preference to share and help a stranger, especially if they’re going to get to meet them and maybe form a relationship with them,” Hare says. “I think it challenges our notion of, somehow, humans being at the top of some ladder of cooperation and helpfulness.”

What about humpbacks, which take risks to help other species? The Marine Mammal Science paper chronicled more than 100 humpback-orca confrontations in California, Alaska, Hawai‘i and elsewhere. In one incident in Antarctica, principal author Robert Pitman saw a humpback roll onto its back and lift a Weddell seal out of the water on its chest. When the seal began sliding off, the whale nudged the seal back with its flipper. The seal remained on the humpback’s chest until it could swim to the safety of an ice floe.

After the paper, “the popular press kind of went stupid,” says Pitman, an Oregon State University marine mammologist. “There were all these articles about humpback heroes,” even though it’s not known what motivates the animals.

Lori Marino, a neuroscientist who founded the non-profit Whale Sanctuary Project, believes the animals might be acting from “empathy-based altruism,” or the emotional impulse to help others. Humpbacks have large brains and complex social structures, which she says give them “the capacity to put themselves in the shoes of another, or the flippers of another.”

Pitman offers a more pragmatic explanation. Some killer whales also prey on humpback calves. When an adult humpback sees an orca attack, it might trigger a “protective maternal response” to intimidate the orcas and rescue the prey, he says. The instinct seems to persist even when the humpback knows the prey is another species.

This could still be a form of kin selection, Pitman says. By rescuing all prey, the humpbacks also save some of their own young relatives, who survive to pass on shared genes. “Humpbacks may indeed be altruistic,” the scientist notes, “but for selfish reasons in the end.”