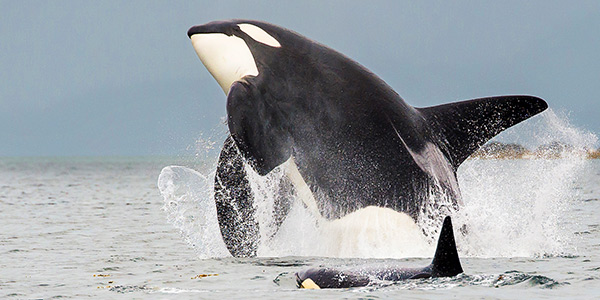 Orcas, also known as killer whales, are among the world’s most easily recognized marine mammals. The largest member of the dolphin family, orcas are highly intelligent and social animals, spending their lives in groups or pods where they hunt together and share responsibility for raising young and taking care of the sick or injured.

Adult orcas have shiny black backs, white chests and patches of white above and behind their eyes. They have paddle-shaped pectoral fins and tall triangular dorsal fins. Their distinct coloring mean they are easy to identify and rarely confused with other dolphins or whales. Orcas vary in size depending on where they live. Adult males are larger than adult females, with males reaching 32 feet (10 meters) in length and females growing to 28 feet (8.5 meters).

Found in every ocean on the planet, orcas are likely the most widely distributed mammal in the world, next to humans. There are three distinct types of orcas recognized in the eastern North Pacific Ocean—transient, resident, and offshore. Residents live close to shore in large pods of about 10 to 20 individuals and feed primarily on fish. Offshore orcas are similar to residents, but are distinguished by their smaller overall size and rounded, nicked fins. Transient orcas live in smaller groups of about three to seven individuals and spend their lives out at sea where they prey on seals, sea lions, and other dolphins (which, strangely, are the same animals that resident orcas like to swim and play with). All three types of orca have genetic differences and do not mingle or interbreed.

These powerful predators feed primarily on other marine mammals, including seals, sea lions, and even whales. Known by some as “wolves of the sea,” orcas hunt in packs, using their numbers to herd prey into a small or isolated area before attacking. Specific populations, like those found in Puget Sound, can develop specialized diets of fatty fish such as salmon or herring. An adult orca consumes an average of 500 pounds of food a day.

Even though orcas can see above and below water, it is their hearing and echolocation abilities that help them locate objects in the water. By emitting clicks and listening for echoes, orcas are able to determine the size, distance, shape, and direction of underwater sea life and objects.

Like other dolphins, orcas are extremely social animals. Within each pod, they establish complex social hierarchies, with females at the top. In pods of resident whales, offspring will stay with their mothers in the same pod for their entire lives. A single pod often has multiple families living together, with each family spanning as many as four generations. Transient pods are smaller and usually comprised of one adult female and one or two of her offspring.

There is no distinct breeding season for orcas, but it is most common in summer. After a 15- to 18-month gestation period, a female will give birth to one calf, which she will then nurse for up to a year. Female orcas have a longer lifespan (about 50 years) than males (about 30 years).

Like other sea-dwelling wildlife, orcas face increasing threats and challenges as the world’s oceans become more polluted and degraded. In 2005, orcas living in Puget Sound were listed as endangered under the U.S. Endangered Species Act. Scientists believe the decline of wild Chinook salmon—a major orca food source—as well as climate change, pollution, and vessel noise, could eliminate this population of orcas unless dramatic steps are taken to save them.

Orcas also suffer from toxic chemical contamination. Chemicals like PCB and DDT, which get dumped into the ocean via mining operations, offshore oil development, and agriculture, enter the food chain through zooplankton. As they move up the chain from invertebrate to fish to orca, these pollutants become concentrated. Recent studies have found that orcas are among the most contaminated marine mammals in the world, making them more susceptible to disease and likely causing reproductive difficulties.

Orcas use “calls” to communicate with one another. Within resident pods, these calls form a dialect, which is unique to the pod and gets passed down from generation to generation.