President's View: Acting Now on a Collision of Crises

Urgent action is needed to prevent a "code red for humanity." 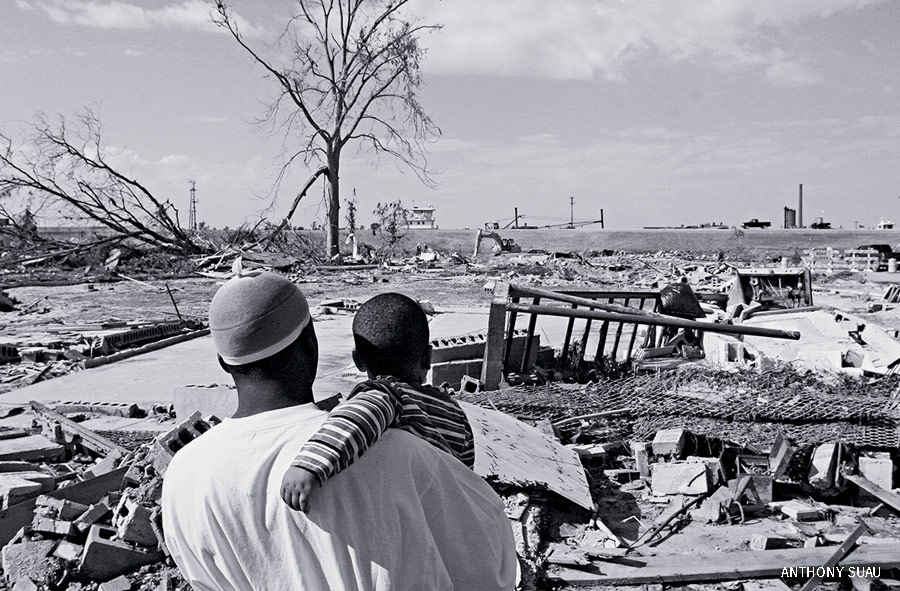 After Hurricane Katrina devastated the U.S. Gulf Coast in 2005, Rodney Berryhill and his nephew surveyed the ruin of their home in New Orleans’ low-income Lower Ninth Ward, which flooded after a levee broke.

ACROSS THE COUNTRY and around the world, it has been a brutal few months as escalating climate-fueled extreme weather events devastate communities. In this country, many regions have seen record temperatures, and 13 states are experiencing extreme and prolonged drought. Nearly 100 major wildfires have been threatening communities across the West. And the Midwest and East Coast have experienced horrific flooding and another bad hurricane season. When you put it all together, 2021 is emerging as the worst year for weather disasters of the past decade—but it’s also likely to be the best of the next decade.

I write this not to scare you, but to inspire action. As the Intergovernmental Panel on Climate Change warns in its recent report, the world is facing a “code red for humanity.” We must act now.

Fortunately, we have federal leadership that understands the magnitude of the crisis. Your team at the National Wildlife Federation is working closely with President Biden and his staff to develop a comprehensive approach to reducing greenhouse gas emissions by at least 50 percent by 2030 and making our nation more resilient by restoring natural defenses such as forests, grasslands, wetlands, waterways and coasts. This work has resulted in the inclusion of key climate and wildlife provisions in the Build Back Better plan and Bipartisan Infrastructure Framework.

These investments will create millions of jobs, particularly in frontline and fossil fuel-dependent communities. They will also employ hundreds of thousands of youth—especially youth of color and tribal youth—through a 21st century Civilian Conservation Corps and make a sizable down payment on the president’s “America the Beautiful” plan to conserve and restore 30 percent of our lands and waters by 2030. And investments in collaborative and proactive habitat restoration and connectivity, as proposed by the bipartisan Recovering America’s Wildlife Act, will help avert the accelerating biodiversity crisis.

By acting now, we can save hundreds of thousands of lives and thousands of at-risk wildlife and plant species while creating millions of good jobs—but there’s no time to waste. Please join us!