All native species matter, but some natives—called keystone plants—support more wildlife than others 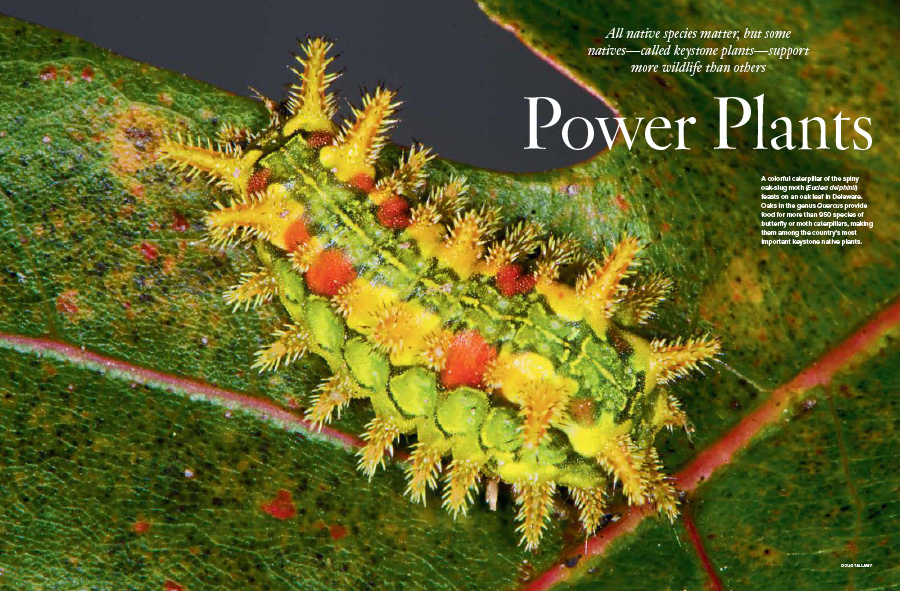 A colorful caterpillar of the spiny oak-slug moth (Euclea delphinii) feasts on an oak leaf in Delaware. Oaks in the genus Quercus provide food for more than 950 species of butterfly or moth caterpillars, making them among the country’s most important keystone native plants.
(Photo by Doug Tallamy)

AS WILDLIFE GARDENERS, we know that native plants are better at supporting native wildlife than nonnatives. But should some native species be given preference over others? Increasingly, scientists who are alarmed by the planet’s dwindling biodiversity have been advocating exactly that strategy, both in home gardens and on larger landscapes in need of restoration.

Of North America’s more than 17,000 species of native plants, some are indispensable for certain vulnerable wildlife species to complete their life cycles. The best-known example is milkweed: Whether it hails from Canada, California or the Midwest, every monarch butterfly must find and deposit its eggs on milkweed in order for its caterpillars to survive.

Massive and majestic, a white oak tree (Quercus alba) in New York (far left) is more than half a century old. Superstars among keystone native plants, oaks nurture 952 caterpillar species, more than any other trees in North America. Caterpillars, in turn, are the primary food for more than 96 percent of nesting songbirds and their chicks, including the white-eyed vireo (top right, with a tufted bird-dropping moth caterpillar). Oaks also secure watersheds, enrich soils and sequester huge amounts of carbon. And they support a dizzying array of other wildlife, from birds such as acorn woodpeckers, mammals such as eastern fox squirrels (bottom right) and insects such as treehoppers (far right).

Lesser known and appreciated are the plants that nurture a large number of different wildlife species—and therefore, the entire ecosystem. “There are certain native plants—and there actually are not that many of them—that are doing most of the work fueling food webs,” says University of Delaware entomologist Doug Tallamy. He and his colleagues call these vital species “keystone” native plants because, like the keystones that supported ancient Roman arches, the ecosystems they inhabit would collapse without them.

How do scientists identify keystone native plants? One clue, says Tallamy, is to look at how many caterpillar species a plant supports. Plants, after capturing solar energy during photosynthesis, must be eaten by animals for that energy to move through the food web. “No animals transfer more energy from plants than caterpillars,” says Tallamy. These insects’ protein-packed bodies are a primary food for scores of wildlife species, including the 96 percent of terrestrial birds that rely on butterfly and moth larvae to rear their young. But caterpillars cannot eat just any native plant. Most Lepidopteran larvae have adapted to feed on a limited number of native species—called their host plants—with which they have coevolved for millions of years.

Tallamy and other biologists have long known anecdotally that some plant genera—such as Quercus, or oaks—are particularly important as caterpillar host plants. A few years ago, he and two colleagues, University of Delaware entomologist Kimberley Shropshire and former graduate student Desiree Narango, undertook a formal survey of host-plant data from across the United States. Their results, published in Nature Communications in late 2020, revealed that 90 percent of the nation’s caterpillars rely on just 14 percent of native plant species for food. “The magnitude of that finding surprised us,” says Tallamy, who calls the study “the most important work we’ve done in my lab.” 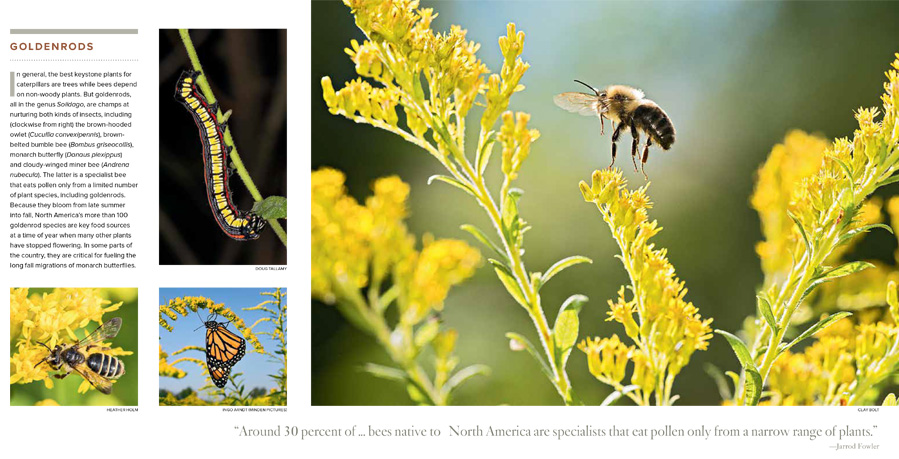 In general, the best keystone plants for caterpillars are trees while bees depend on non-woody plants. But goldenrods, all in the genus Solidago, are champs at nurturing both kinds of insects, including (clockwise from top left) the brown-hooded owlet (Cucullia convexipennis), brown-belted bumble bee (Bombus griseocollis), monarch butterfly (Danaus plexippus) and cloudy-winged miner bee (Andrena nubecula). The latter is a specialist bee that eats pollen only from a limited number of plant species, including goldenrods. Because they bloom from late summer into fall, North America’s more than 100 goldenrod species are key food sources at a time of year when many other plants have stopped flowering. In some parts of the country, they are critical for fueling the long fall migrations of monarch butterflies.

Our need for bees

Caterpillar host plants are not the only critical keystone natives, however. Without animal pollinators—essential to the reproduction of more than 80 percent of the world’s flowering plants—food webs would lose the plants that capture the sun’s energy. By far the most important pollinators are bees, and, like caterpillars, bees can be picky.

“Around 30 percent of the 4,000 species of bees native to North America are specialists that eat pollen only from a narrow range of plants,” says independent pollinator conservationist Jarrod Fowler. Pollen specialist bees tend to have “few or small populations with limited ranges in fragile, specific habitats,” he adds, making them more vulnerable than well-known generalists such as bumble bees. “Most pollen specialists are rare and threatened,” Fowler says.

Because fewer than half of the continent’s native plant species support these specialists—and because generalists can thrive on the same flowers—Fowler and other scientists say that the best way to help all bees is to grow plants for specialists. Since 2016, he has worked with the U.S. Geological Survey’s Native Bee Inventory and Monitoring Lab to compile data and publish lists of these critical plants for more than 1,000 specialist bee species around the country. 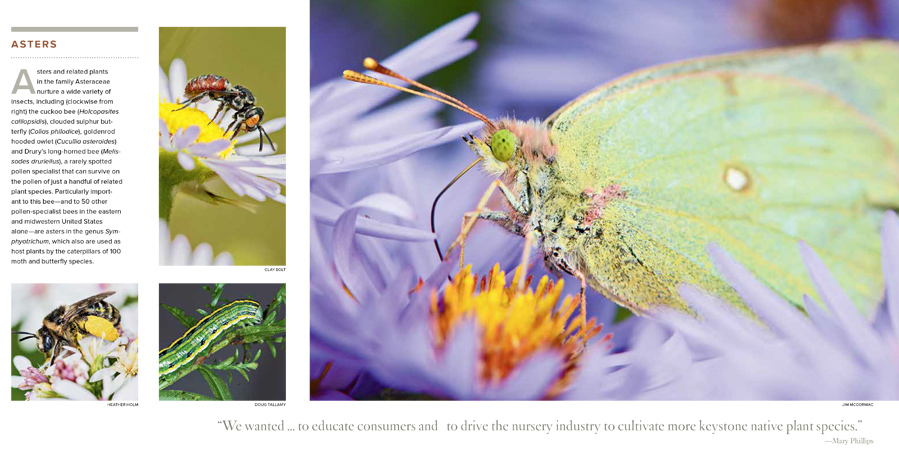 Asters and related plants in the family Asteraceae nurture a wide variety of insects, including (clockwise from top left) the cuckoo bee (Holcopasites calliopsidis), clouded sulphur butterfly (Colias philodice), goldenrod hooded owlet (Cucullia asteroides) and Drury’s long-horned bee (Melissodes druriellus), a rarely spotted pollen specialist that can survive on the pollen of just a handful of related plant species. Particularly important to this bee—and to 50 other pollen-specialist bees in the eastern and midwestern United States alone—are asters in the genus Symphyotrichum, which also are used as host plants by the caterpillars of 100 moth and butterfly species.

Most home gardeners, of course, lack the time or background to comb through scientific literature on bee and caterpillar host plants—much less synthesize those studies. To help gardeners more easily decide what to plant, Mary Phillips, head of Garden for Wildlife™ for the National Wildlife Federation, led an effort to combine Fowler and Tallamy’s data and expertise. The results, released in 2021, are clickable online lists of the top plants for both caterpillars and specialist bees in 10 different ecoregions across the continent. Because food webs in each region are fueled by locally adapted species, the specific plants on each list differ. But some genera (groups of closely related species) show up nearly everywhere. They include oaks, willows, cherry trees, sunflowers, asters and goldenrods.

To get more of those plants into gardens across the country, NWF in April 2021 introduced its Garden for Wildlife Native Plant Collections, home-delivered kits that feature locally appropriate, ready-to-grow keystone native plants. As of this spring, the enterprise was offering 14 plant collections for 36 states, and it is still expanding. Beyond providing a valuable tool to curate these collections, “we wanted the online lists to educate consumers and to drive the nursery industry to cultivate more keystone native plant species,” says Phillips.

Tallamy also has high hopes. Faced with the overwhelming problem of disappearing biodiversity, many people feel powerless, he says. But there are meaningful actions any individual can take, Tallamy adds, and one of them is to grow the keystone native plants that nurture the greatest number of bees, caterpillars and the multitude of other wildlife that depend on them. “If you plant a single acorn,” he says, “it will support tens of thousands of individuals of thousands of species during the tree’s lifetime.”

To see a list of top keystone native plants for your ecoregion, visit nwf.org/KeystonePlants.