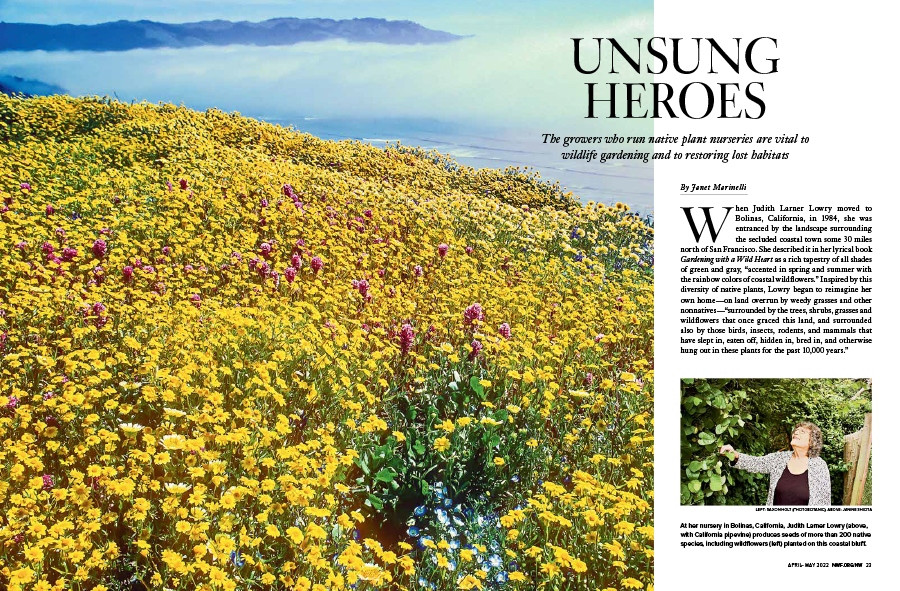 WHEN JUDITH LARNER LOWRY MOVED to Bolinas, California, in 1984, she was entranced by the landscape surrounding the secluded coastal town some 30 miles north of San Francisco. She described it in her lyrical book Gardening with a Wild Heart as a rich tapestry of all shades of green and gray, “accented in spring and summer with the rainbow colors of coastal wildflowers.” Inspired by this diversity of native plants, Lowry began to reimagine her own home—on land overrun by weedy grasses and other nonnatives—“surrounded by the trees, shrubs, grasses and wildflowers that once graced this land, and surrounded also by those birds, insects, rodents, and mammals that have slept in, eaten off, hidden in, bred in, and otherwise hung out in these plants for the past 10,000 years.”

Lowry proceeded to transform her acre-and-a-half property into a native-plant-filled wildlife haven that serves as the face of her small retail business, Larner Seeds. Her garden—a mosaic of coastal prairie, scrub and wildflower fields featuring varieties gathered from around the state—produces some of the seeds of more than 200 species her business supplies to home gardeners, landscaping professionals and land managers. Lowry also sows the seeds on 80 acres that she and her husband own in Mendocino.

She is especially passionate about the wildflower fields filled with baby blue eyes, cream cups and other spring beauties that once lit up hundreds of thousands of acres in California but “are disappearing before our eyes,” she says, as habitat has been developed and invaded by nonnative agricultural and ornamental plants. Of the state’s rich and varied ecosystems, Lowry believes none has suffered more than these annual wildflower meadows, and their decline has also meant “the loss of a particular habitat crucial to a whirling complex of associated fauna,” from native bees and butterflies to songbirds and mammals.

Lowry has been fascinated by seeds since she started collecting them decades ago. Studying them closely under a microscope, she has been blown away by their infinite variety and marvels that each one is unique—dull, shiny, small, large, round, flat, speckled, plain, smooth, pitted or fuzzy. Collecting seeds, says Lowry, “is like receiving a gift.” And planting seeds is a gift to wildlife. If you grow native penstemons instead of petunias, she points out, “it won’t take food out of your mouth, but it may put it into the mouth of another creature.” 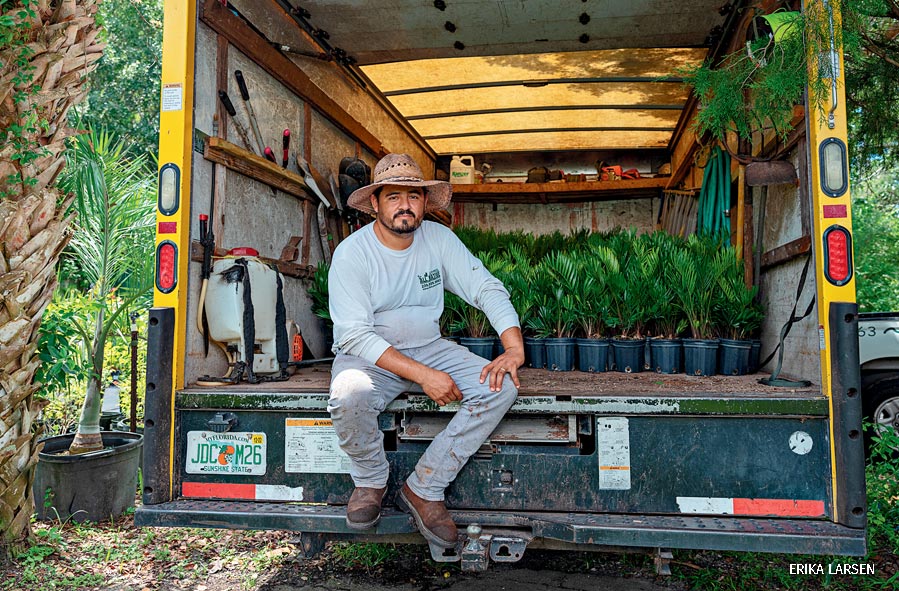 Owned and run by Joaquin Herrera (above), All Native Garden Center, Nursery and Landscapes (below) in Fort Myers, Florida, is one of this botanically diverse state’s most-respected native plant providers.

A need for native plants

Few wildlife gardeners appreciate what it takes to get them the plants they love. Of all the heroes of the native landscaping movement, few are as unsung as intrepid growers such as Lowry who collect and produce the seed, propagate the plants and raise the seedlings until they are sturdy enough to stand on their own and wow buyers—all while nurturing businesses that enable them to support and share their passion for the natural world. These growers are needed more than ever. Despite increasing interest in wildlife gardening, “barely 14 percent of nursery plants available in this country today are native,” says Mary Phillips, head of Garden for Wildlife™ for the National Wildlife Federation. 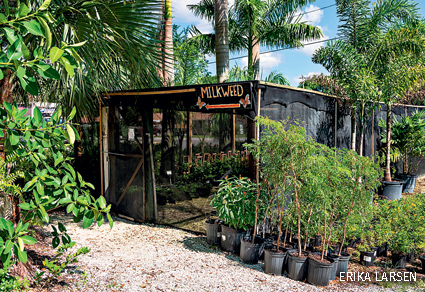 Like California, Florida is characterized by unique habitats found nowhere else in the country that are home to an extraordinary—and imperiled—botanical richness. Based in Fort Myers, All Native Garden Center, Nursery and Landscapes (an NWF Certified Wildlife Habitat®) is helping the state’s gardeners protect and restore this botanical diversity along with the native wildlife it supports.

In 2000, Connecticut transplant John Sibley founded the business and soon became influential in Southwest Florida gardening circles. When Sibley could get away from his busy schedule of procuring, caring for and selling plants, he enjoyed exploring and vacationing in Guatemala. There he met people who became interested in learning about the business. In 2004, one of them, Joaquin Herrera, decided to leave his hometown of Joyabaj in the Sierra de Chuacús mountains of Guatemala’s central highlands and relocate to Florida to work with Sibley. Soon Herrera became Sibley’s right-hand man, essential to the growth of the business, which is now one of the state’s most-respected native plant providers. When Sibley died a year and a half ago after a long illness, he left the business to Herrera.

The nursery features more than 200 of such native plants spread across more than 2 acres, retailing primarily to homeowners and landscape designers. “We do a lot of landscape design and installation, too,” Herrera says. One of his team’s most-popular specialties is creating wildlife sanctuaries, including butterfly gardens that feature bird pepper, starry rosinweed and other regional natives. 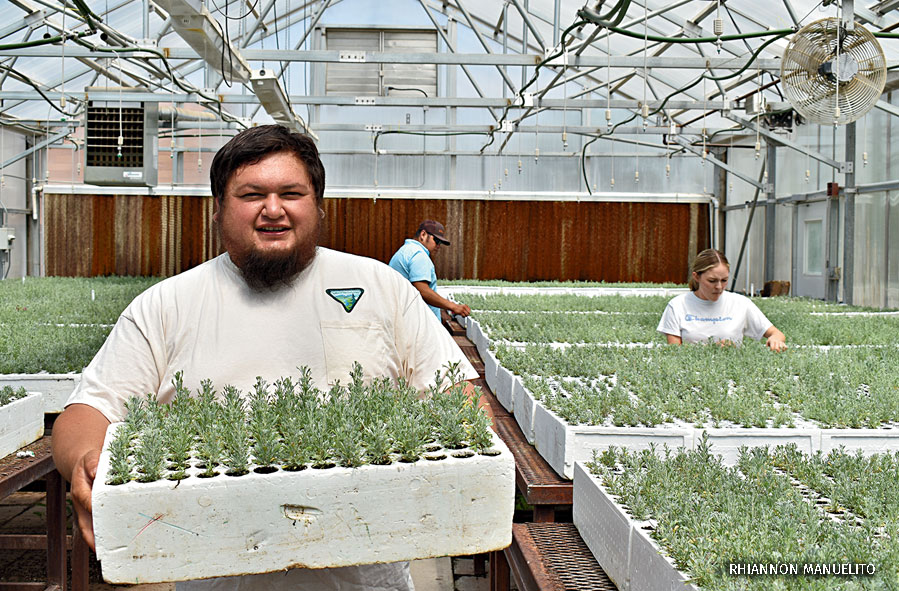 Along an isolated, two-lane road a couple hours south of Boise, a brown-and-white sign welcomes drivers to the Duck Valley Reservation straddling the Idaho-Nevada border. Just beyond is Owyhee, the main community of the Western Shoshone and Northern Paiute Tribes. There, behind the Owyhee Combined School, you’ll find Kenneth “KW” Pete’s domain: three 30-by-60-foot greenhouses that offer much-needed hope for Great Basin sagebrush steppe, one of the most imperiled ecosystems in the United States.

“Our main crop right now is sagebrush, because it’s getting whacked out by fires,” says Pete, who helped build the greenhouses in 2006 as a student at Owyhee Combined. After earning bachelor’s and master’s degrees in environmental science, Pete returned as greenhouse manager.

Aromatic, gray-green sagebrush nestled within native perennial bunch grasses once dominated the region’s vast steppes, providing habitat for hundreds of wildlife species. But today, that habitat is being overtaken by invasive annual grasses, especially cheatgrass, a Eurasian species that is fueling increasingly intense and frequent fires, blackening millions of acres annually. Much of the charred landscape is recolonized by cheatgrass, which outcompetes slower-growing natives and becomes fuel for even bigger, more destructive fires. At stake is not just the landscape but wildlife such as the iconic greater sage-grouse.

Beyond sagebrush, the nursery grows native grasses and wildflowers such as blanket flower and penstemons. The wildflowers provide food for pollinators and other insects that are food for sage-grouse chicks. “The Tribe has a lot of interest in habitat restoration for sage-grouse,” says Pete. “That’s one of our traditional foods.” Nursery-grown plants also help restore habitat for other wildlife such as mule deer. “Our Tribal members rely on a lot of deer to eat throughout the winter,” Pete says. In addition, the nursery produces vegetable starts, including tomatoes, jalapeño and bell peppers, cucumbers and squash.

Just as important, the nursery—a collaboration of the federal Bureau of Land Management, the Tribal government and the Elko County, Nevada, school district—provides an economic and educational boost for the community. “We employ Tribal members and hire students year-round,” says Pete. “It’s a good opportunity for everyone.” 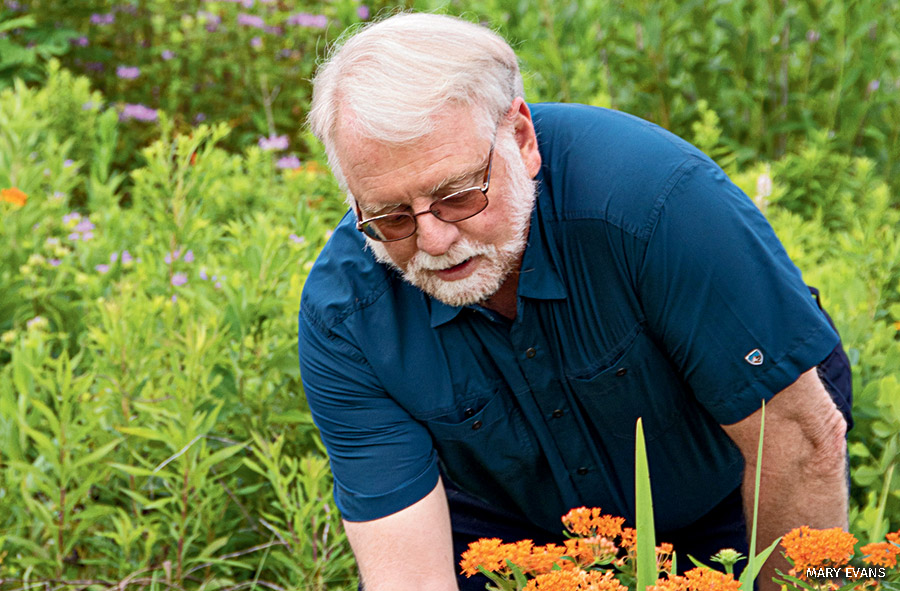 A pioneer of the native plant movement, Neil Diboll (above, with butterfly weed) has run Wisconsin’s Prairie Nursery since 1982, when the business was no more than a backyard and trailer supplied by an extension cord and garden hose.

Steward of the vanishing prairie

In the summer of 1982, Neil Diboll arrived in rural Westfield, Wisconsin, to grow lupine, butterfly weed and other native prairie wildflowers and grasses at a small nursery established a decade earlier by retired state Department of Natural Resources employee Robert Smith. Diboll and Smith, both ecologists, aimed to do more than simply sell rare and unusual plants. Building on the work of groundbreaking conservationists such as fellow Wisconsinite Aldo Leopold—who watched native prairies disappearing and in the 1930s began pushing for prairie restoration—they helped pioneer the native plant movement.

In the early days, Diboll says, the nursery was basically Smith’s backyard. Electricity came from an extension cord that ran from the barn to an old trailer purchased for $3,000. “If you used the toaster,” he says, “all the lights dimmed.” Water came through a garden hose that screwed onto the trailer’s plumbing system. “The bathroom was a row of pines out in the field about 100 yards from the trailer.” An upgrade was required, he quips, “before our girlfriends would come visit.” After three years of backbreaking labor with little financial return, Diboll was on the verge of giving up: “I’m working 80, 90 hours a week digging in this hot dirt, and I say to myself, ‘I went to college for this?’”

But the hard work paid off: Today, Prairie Nursery is flourishing, with 20 greenhouses producing more than half a million plants of more than 200 species—wildflowers, grasses, sedges, ferns and shrubs—annually. Its most popular plants include little bluestem, prairie and meadow blazing star and six milkweed species.

Diboll says the vision he and Smith had 40 years ago—“restoring native prairie plant communities where you take all forms of life into account and share your landscape with your fellow planetary travelers”—is finally coming true. Like other growers, he has seen awareness of the benefits of natives increase gradually at first and, in recent years, swell. “For 35 years we were chasing the market,” he says. “Now the market is finally coming to us.”

Native plants are key to conserving vanishing biodiversity. “With wildlife populations rapidly declining—as more than a million acres of urban and suburban habitat are lost to development annually—increasing the scale of native plants in backyards and home gardens is critical,” says Mary Phillips, head of Garden for Wildlife™ for the National Wildlife Federation. “The good news is that the number of people gardening for wildlife increased by 50 percent in 2020 and has remained steady.” But while interest grows, access to native plants is difficult for many consumers, often requiring significant time and travel. Many growers, in turn, are unable to invest in increased supplies of natives due to the market’s unpredictability.

To address these concerns, NWF in April 2021 launched its Garden for Wildlife Native Plant Collections, home-delivered kits that include keystone native plants (which science shows help the most wildlife species; see Power Plants), garden-design templates, monthly tips and access to an online community of fellow gardeners. The plants in the kits are all locally appropriate species produced through a network of sustainable growers in each region. Initially covering 20 states plus the District of Columbia, the enterprise last fall expanded to 16 additional states and now offers 14 native plant collections. The goal, says Phillips, is to supply plants for all 50 states and create 1 million new wildlife gardens by 2027. The enterprise is well on its way to that goal. At the end of just one growing season, it had resulted in 4,212 new native plant gardens, totaling 232,240 square feet of habitat helping hundreds of native bee, butterfly and other wildlife species.

Janet Marinelli is a New York-based science and garden writer.

Prairies: Pulse of the Heartland »
Native, or Not So Much? »
Native Plant Finder »