A Natural Ally in Confronting Climate 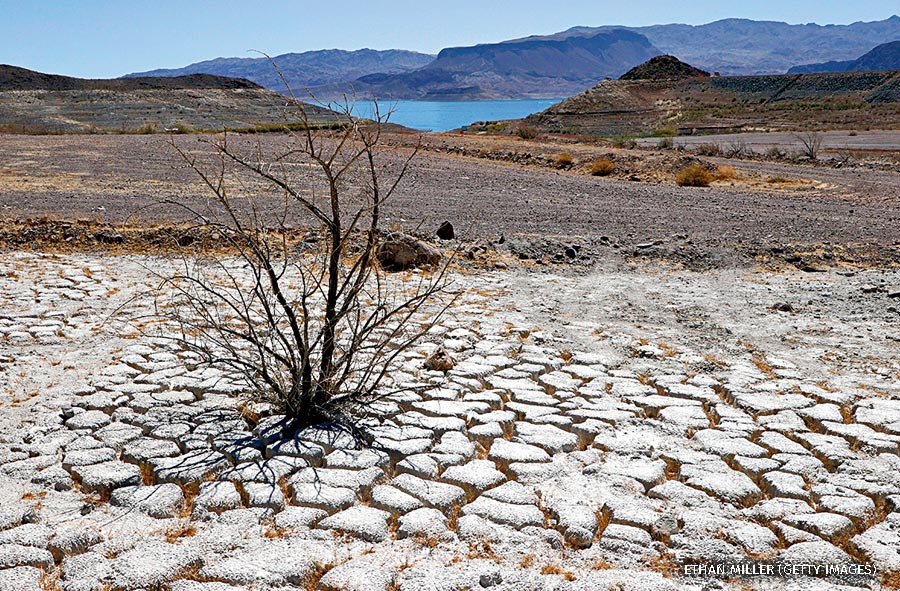 A dead bush stands in what was once a marina near Nevada’s Lake Mead (in the distance). Due to prolonged drought and high water demand, the lake has hit its lowest level since being filled in 1937.

FIRES. FLOODS. HURRICANES. HEATWAVES. DROUGHT. The climate crisis and the disasters it fuels are rapidly intensifying. Last year alone, the 20 largest climate-fueled disasters in the United States caused $145 billion in damage and the loss of 688 lives. The impacts are felt nationwide, but the West is facing particularly severe impacts and uncertainties.

The Colorado River Basin, one of the most important western water sources for people and wildlife habitats, is now at a breaking point due to the ongoing, multiyear drought. Lake Mead, an essential drinking-water source for Arizona, California and Nevada, has hit its lowest level since the reservoir was built in 1937. As a result, communities from the river’s headwaters in the Rocky Mountains to its end at the Gulf of California are facing water shortages.

Such problems may seem insurmountable, but we know what can help. Our greatest strength is one of our most important allies in the climate fight: nature itself.

We know that forest restoration supports natural carbon sequestration, protects people and wildlife from catastrophic wildfires and nurtures watersheds that sustain people, wildlife and waterways such as the Colorado River. We also know that healthy grasslands and prairies prevent erosion, absorb carbon, filter water and support iconic species such as monarch butterflies, Henslow’s sparrows and pronghorn.

Helping species adapt to a changing environment and returning native species such as bison to their historic ranges can help make ecosystems more resilient and support clean drinking water for people and wildlife. For example, the National Wildlife Federation has worked for years to help recover beavers, whose dams replenish groundwater and create habitat for other species. The Montana Beaver Working Group, which NWF helps coordinate, has been working to ensure that state and federal policymakers incorporate beavers into watershed management and improve conditions for beavers.

These examples show how conserving and restoring native ecosystems, species and natural infrastructure—including healthy forests, wetlands and prairies—can safeguard critical drinking-water supplies, remove carbon from the atmosphere and help communities better weather the effects of climate change today. We still have a great deal of work to do to address the rapidly unfolding climate crisis. But progress is not only possible, it is inevitable—when we work with Mother Nature.