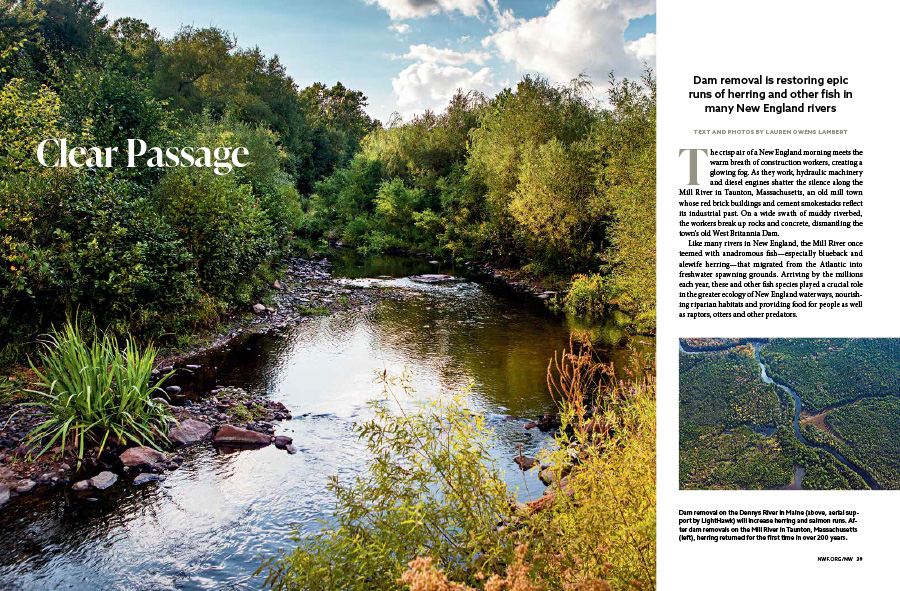 Dam removal on the Dennys River in Maine (above right, aerial support by LightHawk) will increase herring and salmon runs. After dam removals on the Mill River in Taunton, Massachusetts (above left), herring returned for the first time in over 200 years.

THE CRISP AIR of a New England morning meets the warm breath of construction workers, creating a glowing fog. As they work, hydraulic machinery and diesel engines shatter the silence along the Mill River in Taunton, Massachusetts, an old mill town whose red brick buildings and cement smokestacks reflect its industrial past. On a wide swath of muddy riverbed, the workers break up rocks and concrete, dismantling the town’s old West Britannia Dam.

Like many rivers in New England, the Mill River once teemed with anadromous fish—especially blueback and alewife herring—that migrated from the Atlantic into freshwater spawning grounds. Arriving by the millions each year, these and other fish species played a crucial role in the greater ecology of New England waterways, nourishing riparian habitats and providing food for people as well as raptors, otters and other predators.

Industrialization ended that bounty. Over time, New Englanders built more than 14,000 dams, 3,000 of those in Massachusetts alone. By 1921, the state declared the Mill River dead, its herring wiped out by water pollution and a gauntlet of dams. David Belding, then a biologist with the Massachusetts Division of Marine Fisheries (DMF), said that restoration of the river’s fishery was “impossible.” His prediction seemed reasonable. From the 1800s to the early 21st century, “there were no river herring at all in this river,” says Alison Bowden, director of conservation science and strategy at The Nature Conservancy. 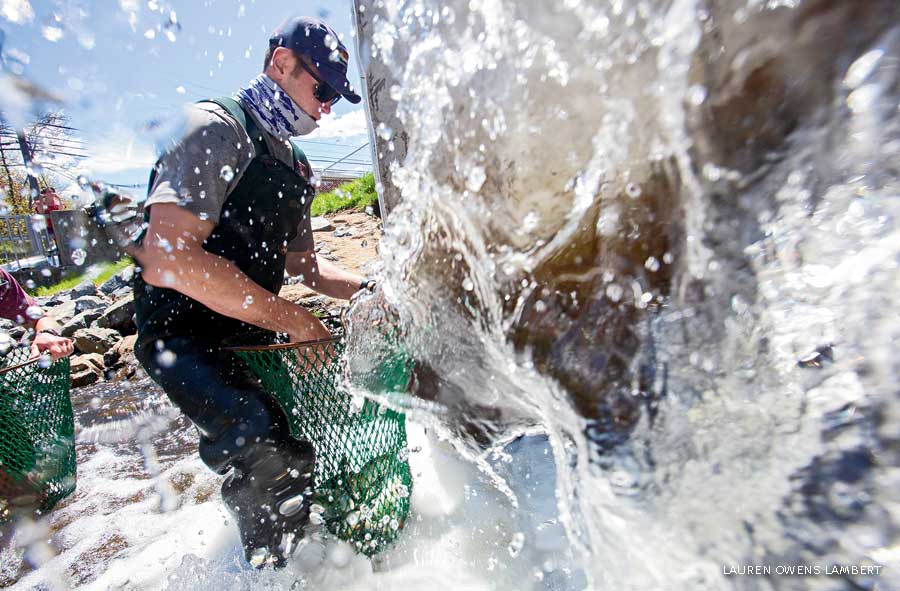 Deconstruction of the old West Britannia Dam on the Mill River near Taunton, Massachusetts (below), has opened some 50 miles of prime habitat for American eel and river herring. Restoring such fisheries is wet and weary work. Biologists with the Massachusetts Division of Marine Fisheries (DMF) prepare to move river herring over Scalley Dam in Woburn (above) so they can reach their spawning grounds. At a dam on the Indian Head River in Hanover, the DMF’s John Sheppard (bottom) collects biological samples from an American shad, one of the largest members of the herring family.

The era of unbuilding

But fish, and nature, are resilient if given half a chance. Massachusetts and resident Indigenous Peoples recognized that many of the aged, industrial-era dams were no longer serving their original purpose and would not be worth the money to maintain. At risk of collapse, many also posed a flooding threat to towns downriver, and some dams were deemed to violate Tribal treaties and cultural values by eliminating fishing rights. So dam deconstruction seemed the best option for both people and the environment. 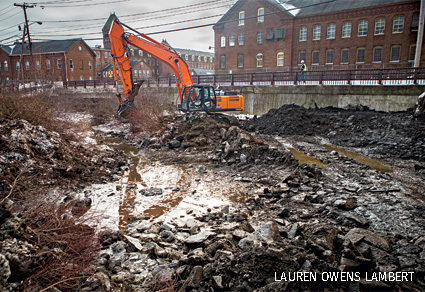 In 2002, in Plymouth, Massachusetts, one of the oldest dams in the nation was the first in the state to come down. Removals on Mill River began in 2012, and by 2018, the state had toppled three of the river’s dams and added a fish ladder, opening some 50 miles of main stem and tributary fish habitat. Early in that effort, Bowden got a call from DMF biologist Mike Bednarski. “He called me on a Saturday morning yelling, ‘We have fish!’.” In 2020, the herring run topped 13,000 fish. “So,” says Bowden, “we proved Dr. Belding wrong.”

Such success means dams are still falling across the state. By 2021, more than 60 dams had been torn down, and with the recent passage of a Massachusetts infrastructure bill and the 2022 federal Inflation Reduction Act, towns are seeing an influx in financial support for such projects. 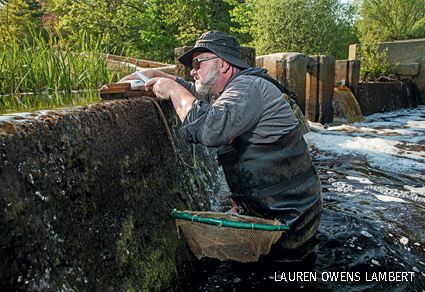 Some projects are cross-cultural collaborations. A dam removal on the border between Maine and Canada, for example, involved government entities, the Passamaquoddy Tribe and the Peskotomuhkati Nation. The goal was to restore fish runs to the Skutik–St. Croix River, which crosses the heart of these Indigenous homelands. “At one point, there were millions of sea-run fish on the Skutik River,” says Chris Johnson, ecology manager for the Passamaquoddy Sipayik Environmental Department. “Now we’re seeing a very small fraction of that, and some species, such as Atlantic salmon, have been totally extirpated from the river.” In fact, New England no longer has any Atlantic salmon except in Maine, where the remaining few are found in only eight rivers. “At one point, there were only 900 alewives returning,” Johnson adds. Steps to increase fish access to spawning grounds in 2013 have brought numbers up to 712,000, and Johnson hopes an additional dam removal will result in the return of 20 million river herring in the next five to 10 years. “Currently, we just don’t have what was here,” he says. “It’s really vital that these fish species survive so that we can survive.” 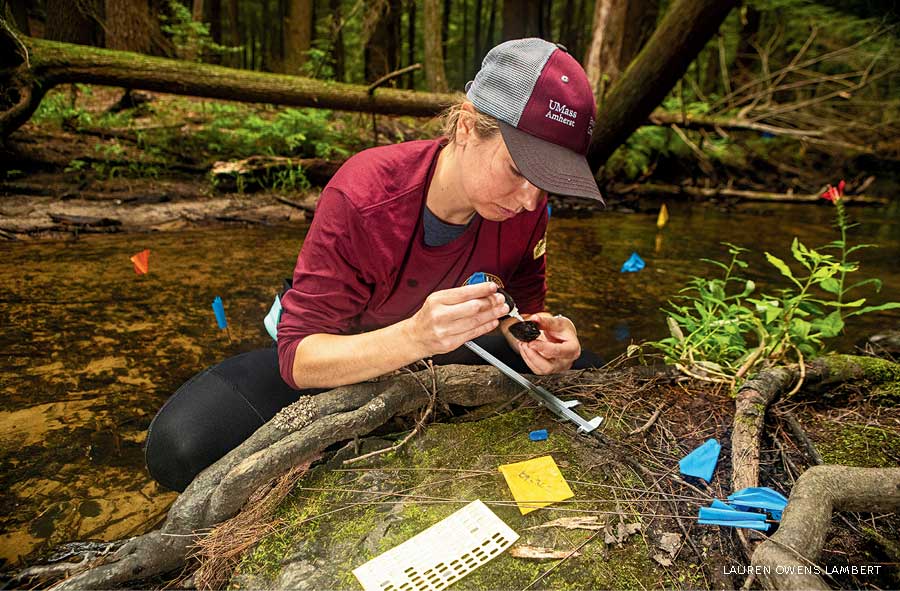 Researcher Ayla Skorupa (above) glues tags on endangered freshwater mussels before moving them downriver from a dam deconstruction in Pepperell, Massachusetts. On the Skutik–St. Croix River in Maine, technicians with the Passamaquoddy Sipayik Environmental Department (below) collect a receiver that locates acoustic tags that identify American shad. Careful science and dam removals are restoring runs of blueback and alewife herring (bottom) to New England rivers.

Weighing the pros and cons 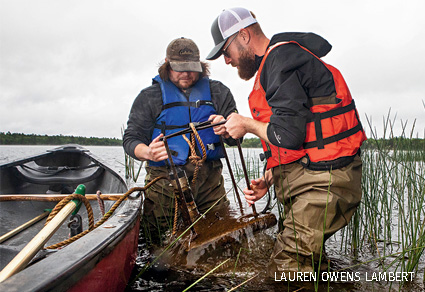 Dam removal needs to be carefully weighed since some dams benefit wildlife and may provide essential habitat for some endangered freshwater mussels such as brook floaters. “Their highest abundance in Massachusetts is directly downstream of dams or within shallow dam impoundments,” says Ayla Skorupa, a directorate fellow with the U.S. Fish and Wildlife Service and University of Massachusetts–Amherst. One of the few habitats for brook floaters was near a dam on Sucker Brook in Pepperell, Massachusetts. Before that dam was removed in 2021, Skorupa and others helped relocate the mussels. “Thinking critically about the species around the dam, how they’re impacted and the overall watershed is really important,” she says. 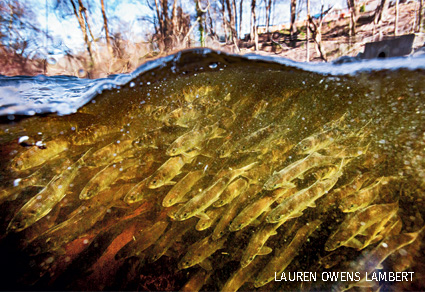 On balance, the benefits of dam removal are clearly apparent. In the five years since the West Britannia Dam came down in Taunton, for example, button bush, joe-pye weed and golden ragwort bloom along the riparian corridor, and birch and willow saplings rise from what was once a reservoir. Muddy banks bear the footprints of river otter, and small fish rise to the water’s surface as the cries of osprey fill the sky. “With the rebirth of the river and the return of the fish,” says Bowden, “you have all of these cascades of benefits, both for nature and people. We have a much cleaner and healthier river that is now connected all the way to the ocean, and the community can now enjoy a clean and healthy river that has fish in it for the first time in generations.”

Lauren Owens Lambert is a conservation photographer and journalist based in Massachusetts.