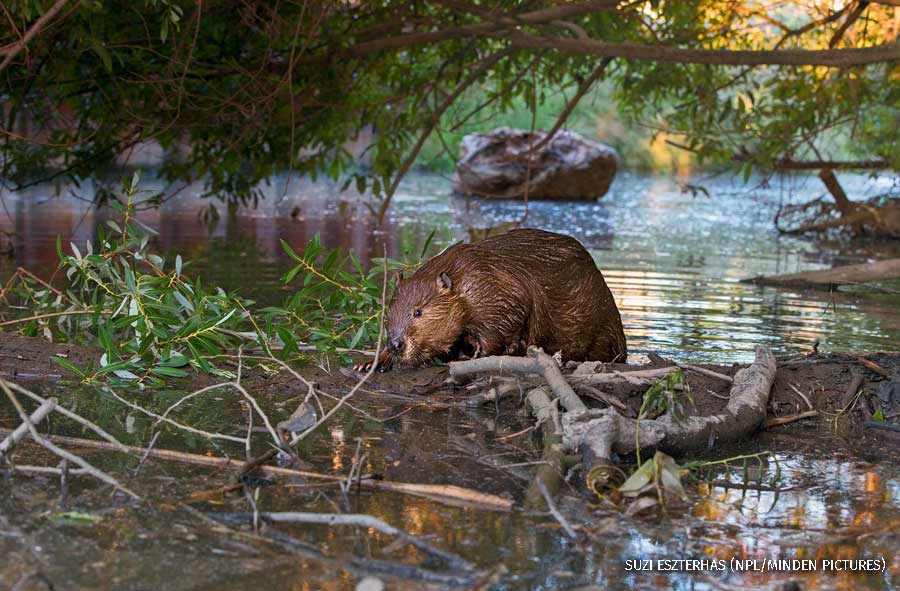 This American beaver is one of many whose dams are sustaining wetlands in Martinez, California, and across the U.S. West.

WHEN IDAHO RANCHER JAY WILDE was a kid in the 1950s, he’d catch native Bonneville cutthroat trout in Birch Creek near his family’s land and watch ruffed grouse parade along the creek’s green banks. At the time, ample snowmelt kept the stream flowing well into summer. But by 1994, the creek had dried to a trickle in springtime because of declining snowpack in a warming world.

Wilde needed water to sustain his cattle, so he wondered whether Birch Creek could be restored. Then it hit him one morning in 2006: The beavers he’d seen as a kid were missing. If he could restore the beavers, maybe they’d restore the creek.

Historically, North America’s largest rodents—and their dams—helped store water in marshes and ponds across the land. But by the turn of the 20th century, beaver numbers had plunged from some 400 million to about 100,000 due to the fur trade and declining habitat. As the animals vanished, wetlands suffered.

Wilde began studying how beavers affect ecosystems and learned that after the animals build their dams, water spreads into ponds that replenish aquifers, filter out impurities, slow the impact of wildfires and floods and create thriving riparian areas that attract more native species of fish, insects, birds and other creatures. He had found an answer for Birch Creek.

A beaver dubbed Big Bella is released into Washington’s Okanogan-Wenatchee National Forest as part of a project to boost water storage as snowpack diminishes.

“Beavers’ influence on landscapes is profound,” says Ben Goldfarb, author of Eager: The Surprising, Secret Life of Beavers and Why They Matter. “By turning free-flowing streams into ponds and wetlands, they create niches for just about every species imaginable—breeding habitat for frogs and salamanders, slow-water refuges for baby trout and salmon, dead trees for woodpeckers and raptors and ponds for other water-loving mammals like moose, otters and muskrats. They truly are a keystone species.”

Residents of Martinez, California, saw this firsthand after a beaver pair settled in local Alhambra Creek in 2007. A few years earlier, those waters had been a mere “trickle,” says Heidi Perryman, founder of Worth a Dam, a Martinez group that supports beaver restoration. After the beavers’ arrival, the wetlands they created attracted at least 20 wildlife species that were new or uncommon in the area, including steelhead trout, mink and river otters.

Wilde then worked with the U.S. Forest Service and Idaho Fish and Game to relocate nine beavers to the site. By 2019, Birch Creek had 149 dams along nearly 2 miles of stream and flowed 42 days longer into summer. The healthier flow not only helped Wilde with his cattle, it aided local wildlife. By 2019, native Bonneville cutthroat trout—a species of special concern—were 10 to 50 times more abundant than they had been before the beavers returned.

“When you see the increase in low summer flows, it’s like beavers magically created water,” says Bouwes. “Their dams capture water during spring when people can’t use it, and slowly release it throughout summer.”

In Montana, a Beaver Dam Analog creates wetlands that will support the natural recolonization of beavers.

That magic is a potent weapon in fighting the effects of climate change. Among the benefits of beaver ponds:

• Beaver dams slow stream flow, which can reduce the impacts of downstream flooding—an important ecosystem service. The National Climate Assessment predicts flooding “may intensify in many U.S. regions, even in areas where total precipitation is projected to decline.”

• Beaver pools allow sediments and waterborne pollutants such as nitrogen and heavy metals to filter downward, preventing their transport downstream. A 2015 study from the University of Rhode Island found that beaver ponds can help remove up to 45 percent of nitrogen from streams. Researchers in Maryland are now enlisting beavers to reduce pollutants entering the Chesapeake Bay.

• A 2018 study in Ecohydrology found that riparian areas with beaver dams can better maintain vegetation during periods of drought. Other research suggests these areas may be islands of refuge for wildlife during wildfires.

In Montana, the National Wildlife Federation and partners are creating beaver wetlands to improve riparian areas that benefit greater sage-grouse and other wildlife. “I like to think of beavers as ‘wildlife for water,’” says NWF project lead Sarah Bates. “Beaver restoration offers natural climate solutions, helping people see a way to make things better for the future.”

Catherine Arnold is based in Utah.