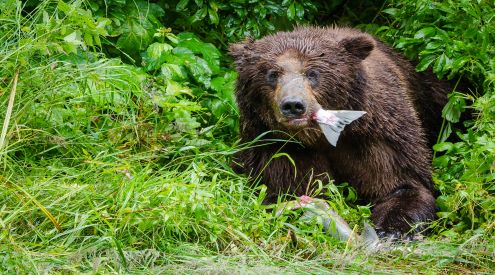 WASHINGTON, D.C. — The National Wildlife Federation joined a coalition of conservation and Indigenous groups in filing a lawsuit against the U.S. Forest Service for exempting 9 million acres of the Tongass National Forest from protections of the National Roadless Area Conservation Rule. Considered the crown jewel of the national forest system, the Tongass is one of the most biologically diverse and relatively intact temperate rainforests on earth.

“The large roadless areas of the Tongass provide outstanding habitat for a remarkable diversity of wildlife. Stripping protections from this forest to allow for road construction, clear cut logging, and other destructive activities will degrade water quality, accelerate climate change impacts, and threaten local economies that rely on clean water,” said Tracy Stone-Manning, associate vice president for public lands at the National Wildlife Federation. “The U.S. Forest Service ignored public input from Indigenous tribes, local communities and tens of thousands of people across the country, and it violated the law. The administration left us no choice but to go to court to protect this remarkable place for future generations.”

"As Southeast Alaskans are keenly aware, the public process around the Alaska-specific Roadless Rule, in which the Trump administration exempted the Tongass from the Roadless Rule itself, was flawed from the start," said Meredith Trainor, executive director of the Southeast Alaska Conservation Council. "The Southeast Alaska Conservation Council has always gone to court to fight to save the places we love, and we are honored to do so today in partnership with Tribal leaders and other partners from the conservation community. We will work to reinstate Roadless Rule protections for our forest in the early days of the incoming Biden Administration, even as we challenge the Record of Decision from the dark days of Trump in court."

The Tongass National Forest is the largest forest in the United States and plays a vital role in absorbing greenhouse gas emissions. In addition to providing habitat to grizzly bears, wolves, Sitka black-tailed deer, bald eagles, and all 5 species of Pacific salmon, the forest contains sacred sites of great importance to the Tlingit, Haida, and Tsimshian people. Every year more than a million people visit the Tongass to enjoy the old growth forest and to hunt, fish, hike, and camp.

The 2001 Roadless Rule has helped protect 58 million acres of inventoried roadless areas in national forests while giving flexibility for activities such as recreation, hydropower, and wildfire response.