Teaching Kids to be Nature Smart 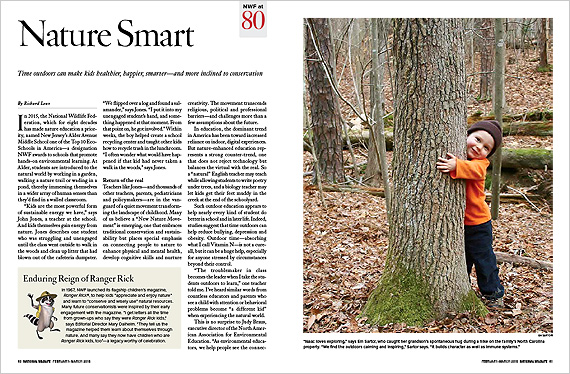 "Isaac loves exploring," says Em Sartor, who caught her grandson's spontaneous hug (above) during a hike on the family's North Carolina property. "We find the outdoors calming and inspiring," Sartor says. "It builds characters as well as immune systems." Naturalist Shaina Stewart (below) teaches young summer campers about the delights of prairie insects and flowers at the Aldo Leopold Nature Center in Wisconsin.

IN 2015, THE NATIONAL WILDLIFE FEDERATION, which for eight decades has made nature education a priority, named New Jersey’s Alder Avenue Middle School one of the Top 10 Eco-Schools in America—a designation NWF awards to schools that promote hands-on environmental learning. At Alder, students are introduced to the natural world by working in a garden, walking a nature trail or wading in a pond, thereby immersing themselves in a wider array of human senses than they’d find in a walled classroom.

“Kids are the most powerful form of sustainable energy we have,” says John Jones, a teacher at the school. And kids themselves gain energy from nature. Jones describes one student who was struggling and unengaged until the class went outside to walk in the woods and clean up litter that had blown out of the cafeteria dumpster. “We flipped over a log and found a salamander,” says Jones. “I put it into my unengaged student’s hand, and something happened at that moment. From that point on, he got involved.” Within weeks, the boy helped create a school recycling center and taught other kids how to recycle trash in the lunchroom. “I often wonder what would have happened if that kid had never taken a walk in the woods,” says Jones. 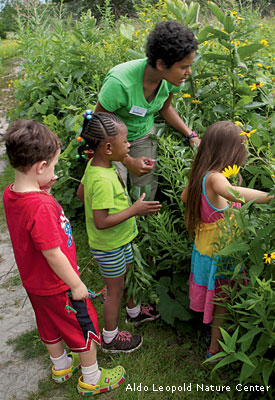 Return of the Real

Teachers like Jones—and thousands of other teachers, parents, pediatricians and policymakers—are in the vanguard of a quiet movement transforming the landscape of childhood. Many of us believe a “New Nature Movement” is emerging, one that embraces traditional conservation and sustainability but places special emphasis on connecting people to nature to enhance physical and mental health, develop cognitive skills and nurture creativity. The movement transcends religious, political and professional barriers—and challenges more than a few assumptions about the future.

In education, the dominant trend in America has been toward increased reliance on indoor, digital experiences. But nature-enhanced education represents a strong counter-trend, one that does not reject technology but balances the virtual with the real. So a “natural” English teacher may teach while allowing students to write poetry under trees, and a biology teacher may let kids get their feet muddy in the creek at the end of the schoolyard.

Such outdoor education appears to help nearly every kind of student do better in school and in later life. Indeed, studies suggest that time outdoors can help reduce bullying, depression and obesity. Outdoor time—absorbing what I call Vitamin N—is not a cure-all, but it can be a huge help, especially for anyone stressed by circumstances beyond their control.

“The troublemaker in class becomes the leader when I take the students outdoors to learn,” one teacher told me. I’ve heard similar words from countless educators and parents who see a child with attention or behavioral problems become “a different kid” when experiencing the natural world.

New research proves the point. Time in nature boosts not only physical and psychological health but also academic performance. A six-year study of 905 public elementary schools in Massachusetts found that third-graders got higher scores on standardized testing in English and math in schools that had closer proximity to natural areas. Likewise, preliminary findings of a 10-year University of Illinois study of more than 500 Chicago schools indicate similar results, especially for the most challenged learners. The researchers  therefore suggest that greening schools may be one of the most cost-effective ways to raise student test scores.

Such news is timely because of the emphasis on STEM (science, technology, engineering and math) learning. “Average Americans spend less than 5 percent of their life in classrooms, and an ever-growing body of evidence demonstrates that most science is learned outside of school,” write John Falk and Lynn Dierking in their book The 95 Percent Solution. Their “solution” for science education involves out-of-school learning in areas such as museums, zoos, parks and nature centers. “The sheer quantity and importance of this science-learning landscape lies in plain sight but mostly out of mind,” say Falk and Dierking. 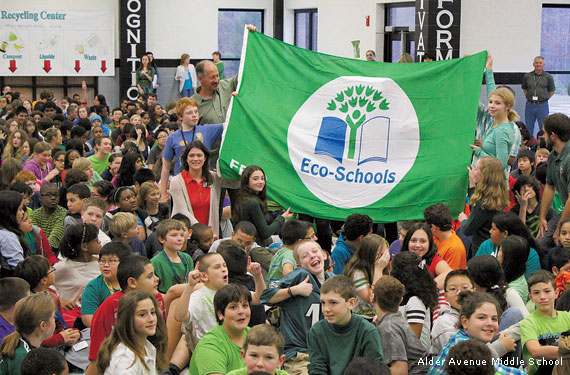 Hoisting a well-earned banner, students and staff at the Alder Avenue Middle School in Egg Harbor Township, New Jersey, celebrate being named one of the Top 10 Eco-Schools by the National Wildlife Federation–an honor denoting nature-based learning.

Natural learning has long been top of mind at the National Wildlife Federation, which has a history of innovative programs to educate kids about nature. In 1967, NWF launched Ranger Rick® magazine to engage kids with nature and now offers Ranger Rick Jr.® for very young children. The Federation also has two school-based programs: Schoolyard Habitats®, begun in 1996, includes 5,200 K-12 schools that have installed wildlife gardens where kids can experience nature. And in 2009, NWF became the sole U.S. host of the international Eco-Schools program, which has recruited some 3,500 U.S. schools in a campaign to green their buildings, grounds and curricula.

“One of the toughest challenges in fostering this movement is to find educators who are truly comfortable teaching in outdoor spaces,” says Kevin Coyle, NWF’s vice president of education and training. “It requires the ability to work with children who are not confined to their seats and desks, which can be intimidating for many.”

At Virginia’s Centreville Elementary School, another Top 10 Eco-School, Principal Dwayne Young took the challenge. Eight years ago, when he joined the school, he toured what he describes as the “dilapidated playground space” and adopted a radically new approach. With the support of teachers, parents and students, the school grounds now have boulders to climb on, raised-bed gardens for study, a walking trail, rain gardens and a vegetable garden that helps feed  a homeless shelter. Two classes even raise trout in their classrooms, which they release in the spring.

As the school’s efforts have grown, teachers have explored new ways to adapt the curriculum while accommodating current education standards. For example, one garden is a topographically correct, scale model of Virginia with indigenous plants, used by fourth-grade classes to teach the history of the state.

“Over the next 10 years, we’ll be investing more in education than at any time in NWF’s history,” says Federation President Collin O’Mara. He hopes to increase the number of schools involved in the Schoolyard Habitats or Eco-Schools programs from 8,700 to 30,000 and the number of children served annually from about 5 million to 20 million. “We’re working with major publishers and retailers to promote Ranger Rick and get kids engaged outdoors,” he says, adding that a “crucial task” is to make nature-based education part of the reauthorization of federal No Child Left Behind legislation. “We need to make sure that future generations will be equipped to confront the challenges facing wildlife.”

For conservation, the stakes are high. Research suggests that adults with a strong environmental ethic almost always had transcendent experiences in nature when they were kids. Most national conservation organizations—as well as some state and federal agencies, outdoor businesses and children’s entertainment groups—are creating programs to connect children to nature. This nonpartisan New Nature Movement is developing bottom up as well as top down. Here’s a sampling of progress to date:

• Every Kid in a Park: In February 2015 the White House launched its Every Kid in a Park initiative to give all fourth-grade students and their families free admission to national parks and other federal lands and waters for a year. NWF and the nonprofit Children & Nature Network (C&NN) are helping promote this effort.

• Family Nature Clubs: Because many families are unfamiliar or uncomfortable with the idea of exploring nature, C&NN offers a tool kit on how to start nature clubs that can help families in a particular area plan hikes and other outdoor activities. To date, some 200 nature clubs have registered with C&NN, some involving more than 1,500 area families.

• Playscapes: Working with experts in landscape architecture, education, recreation and urban planning, NWF published a guide, Nature Play & Learning Places, about how to build outdoor play areas where kids can explore, exercise and connect with nature.

• “Park Prescriptions”: Recognizing that the ability to learn and create is inseparable from physical, psychological and spiritual health, a growing number of physicians are writing “park prescriptions” for prevention and therapy. “The more we restrict children’s movement and separate children from nature, the more sensory disorganization we see,” says Angela Hanscom, a leader in pediatric occupational therapy. She views time spent in nature as “the ultimate sensory experience” to combat dysfunction in kids.

• Mayoral Leadership: More municipal leaders and urban planners are recognizing the benefits of “biophilic design”—preserving land and creating natural habitats in schools, workplaces and neighborhoods, which can improve public health, increase productivity and grow a healthier economy. To that end, the National League of Cities (NLC) is working with C&NN to connect families to nature in urban areas. “As mayors … we help most by bringing all sectors of a community together to connect people to nature,” says Salt Lake City Mayor and NLC President Ralph Becker. “Politically, this is a win-win issue.”

Win-win does not mean slam dunk. The impediments to connecting with nature remain formidable, including societal immersion in the virtual world, loss of urban parkland and open spaces in neighborhoods, the widening gap between rich and poor, the pandemic of inactivity and, culturally, a pessimistic view about the future too readily accepted by too many.

The greatest challenge will be to move beyond the programmatic to create deep, lasting cultural and environmental change. The movement must offer a distinctly new and hopeful vision, not only of sustainable society but of a nature-rich civilization. And the movement must accelerate efforts to build cultural and ethnic diversity because all children need nature—not just the kids with parents who appreciate nature or those of a certain economic class, sexual identity or set of abilities. Every child.

In 1967, NWF launched its flagship children’s magazine, Ranger Rick®, to help kids “appreciate and enjoy nature” and learn to “conserve and wisely use” natural resources. Many future conservationists were inspired by their early engagement with the magazine. “I get letters all the time from grown-ups who say they were Ranger Rick kids,” says Editorial Director Mary Dalheim. “They tell us the magazine helped them learn about themselves through nature. And many say they now have children who are Ranger Rick kids, too”—a legacy worthy of celebration.

In 2005, author Richard Louv published Last Child in the Woods: Saving Our Children from Nature-Deficit Disorder, a book that spawned a global grassroots movement to reconnect children with nature. A year later, Louv helped launch the nonprofit Children & Nature Network (C&NN) to encourage leaders in education, urban planning, conservation, health and other fields “to create a future in which all children play, learn and grow with nature in their everyday lives.” To date, C&NN has provided support to 369 grassroots campaigns that have connected more than 3.5 million children with nature experiences in 48 states and 12 nations.

To learn more about the movement, go to www.childrenandnature.org.

Richard Louv’s tenth book, Our Wild Calling, will be published in November 2019.