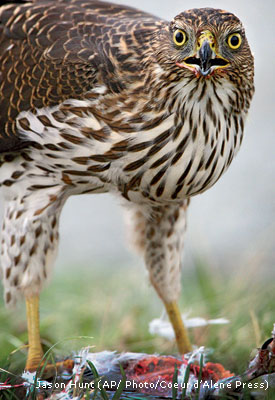 IN RURAL MARYLAND, our 3.4 acres of oak-dominated woodlands offer a year-round home for a variety of forest birds. Backyard seed feeders draw many of these winged creatures in close. The “regulars” include doves, jays, juncos, titmice, cardinals, chickadees, nuthatches, woodpeckers—and, every now and then, hawks.

Spotting a carnivorous hawk at a seed feeder is not as surprising as it might sound. These raptors rocket in with talons-out, surprise attacks on birds that eat seeds. Indeed, sharp-shinned (left) and, especially, Cooper’s hawks have adapted so well to human-altered habitats that they now are common at bird feeders nationwide.

Data from Project FeederWatch, a citizen science program run by the Cornell Lab of Ornithology and Bird Studies Canada, confirm what backyard birders have been observing for years. According to Project Leader Emma Greig, Cooper’s hawks were reported at just 6.4 percent of participants’ feeders in 1989. By 2014, that proportion had grown to 21.9 percent. “We’ve seen a significant increase in the number of Cooper’s hawks visiting feeders throughout the species’ range,” she says.

One reason may be that, thanks to the 1972 ban on DDT (which caused disastrous thinning of the egg shells of raptors and other birds), hawks are faring better overall. Across much of the country, regrowth of mature trees in suburbs built during the 1960s and 1970s also means more nest sites for forest hawks close to the places where people live.

But a bigger reason for increased urban sightings is the explosive popularity of bird feeding—and both Cooper’s and sharp-shinned hawks, or “sharpies,” are ideally suited to prey on feeder birds. Members of the genus Accipiter, the two raptors are superb aerialists with long tails and short, rounded wings ideal for quick maneuvers through woodlands—abilities that serve them well in leafy, obstacle-packed backyards. The hawks hunt small to medium-sized birds, the size of most feeder birds, as well as mice and chipmunks, animals also drawn to feeders to feast on spilled seeds.

Cooper’s hawks in particular “are adaptable, generalist hunters that have really taken to urban environments,” says Geoff LeBaron, director of the National Audubon Society’s Christmas Bird Count (CBC). LeBaron recalls recently driving around Tucson, Arizona, and observing the raptors “just sitting on telephone wires. You never would have seen that 30 or 40 years ago.” He says CBC participants today are three times more likely to spot Cooper’s hawks during their annual counts than they were in 1960.

Even before bird feeding became popular, Cooper’s and sharpies were associated with humans—and not in a good way. During the 1800s and early 1900s, Cooper’s had an overblown reputation among farmers as a “chicken hawk” for preying on domestic chickens. Sharpies, meanwhile, were maligned as songbird killers. While most U.S. birds were granted protection in 1918 under the Migratory Bird Treaty Act, hawks were not, and they were shot in large numbers. Outrage at the slaughter, especially sport shooting at key migration points, led lawmakers to finally give the raptors protection under the act in 1972.

New public attitudes toward hawks are evident at what is now Hawk Mountain Sanctuary in eastern Pennsylvania. A few generations ago, people made trips to this site to shoot down as many fall migrants as they could, says Keith Bildstein, the sanctuary’s director of conservation science. “Today, people come from across the country and the world to join us on the mountain, not just for the annual hawk count, but to cheer on these incredible birds.”

Today’s abundance of backyard prey may be causing some hawks to forgo fall migration. When migrating sharpie numbers dropped steeply off Cape May, New Jersey, from the mid-1980s to the mid-1990s, many feared it signaled a declining population. But ornithologist Charles Duncan, then at the University of Maine at Machias, had “a hunch that hawks had less pressure to migrate because they could prey on feeder birds in winter.”

To test the hypothesis, he analyzed 18 years of CBC data on New England’s sharpies. Duncan discovered that between 1975 and 1992, the number of hawks that overwintered in the region increased by more than 500 percent. “The raptors were surviving on bird seed once-removed,” he suggests.

Might feeder birds be suffering from increased hawk predation? “There is no evidence that hawks have caused declines in any prey species taken at feeders,” says Greig. Feeder birds such as sparrows, juncos and mourning doves “are all doing well,” she says. “People should be happy to witness these cool, natural interactions in their own backyards.” 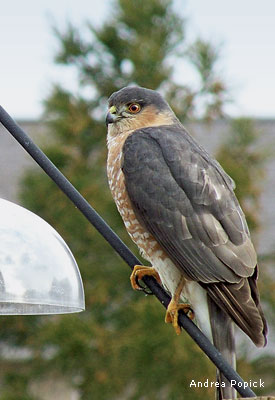 If seeing your favorite feeder birds turn into lunch for a hungry Cooper’s (right) or sharp-shinned hawk is upsetting, there are steps you can take to protect backyard prey from raptors:

Create cover: Plant native trees and shrubs, especially evergreens, near feeders. Build 8-foot-wide, 4-foot-high brush piles no more than 20 feet away from feeders. Both give birds places to dive into and escape, not only from hawks but also cats. If your plants provide seeds or fruit, birds can feed while taking cover.

Prevent window collisions: Birds often mistake glass for a passageway or reflected landscape. They also may hit windows when trying to escape from hawks. A stunned, disoriented bird will be much easier prey for a raptor. To minimize collisions, add “visual noise” such as bird-warning decals and screens to the outside of see-through or reflective windows and sliding-glass doors. In addition, consider moving feeders to within 3 feet of your windows to reduce the chance of an accelerated flight into the glass.

Cover up: Because hawks are attracted to the sight of prey activity, try keeping feeder customers out of view. Tarps and even umbrellas can be useful. Look for bird feeders with roofs or add non-see-through covers.

Avoid ground feeding: Birds that are eating on the ground are particularly susceptible to hawk attacks. These birds cannot react as quickly and have fewer escape routes. Consider switching to hanging platform feeders for ground-feeding birds such as sparrows and doves.

Cage or fence: Wire-caged feeders designed to keep out larger birds like jays may also help small birds dodge hawks. Some people put up 4-foot-high rabbit fencing to keep hawks from swooping over and down to any seed eaters on the ground.

Let nature take its course: Alternatively, you can accept that raptors are part of nature, too, and deserve nourishment as much as do the songbirds that visit your feeders. Predators such as Cooper’s and sharp-shinned hawks are important parts of healthy ecosystems, often preying on birds that are weakened by illness or age. Hawks also are protected by state and federal laws, so never harm or harass the animals. In fact, many backyard birders are so thrilled to observe predator-prey interactions without leaving home that they put out the welcome mat for raptors.

Margaret A. Barker is co-author, with Paul J. Baicich and Carrol L. Henderson, of Feeding Wild Birds in America: Culture, Commerce and Conservation.