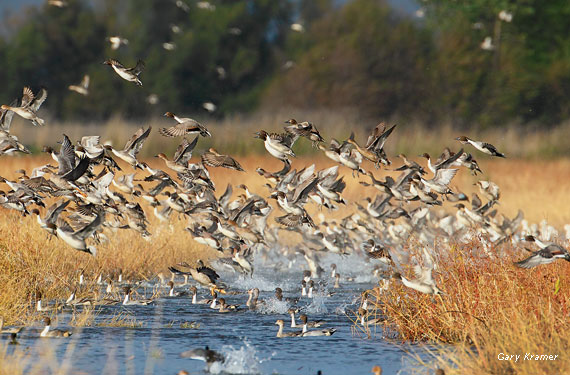 An abundance of northern pintail, American wigeon, white-fronted geese and other waterfowl lift off from vital freshwater wetland habitat near the Gulf Coast of Texas. Protecting the nation’s waterways and shorelines, both for people and wildlife, will need to be a top policy priority for the next U.S. president.


WILDLIFE CONSERVATION may not be explicitly on the ballot this fall, but there is no question that the next U.S. president and Congress will face decisions that will have a lasting impact on the nation’s wildlife.

Many wildlife populations are in decline, with about one-third of U.S. species considered at risk. Private interests threaten public lands. Water quality is suffering. Climate change is altering ecosystems. And habitat fragmentation, invasives, disease and pollution are pushing species toward critical tipping points.

Such successes take bipartisan support, a scarce commodity in these polarized times. But meaningful conservation action will occur if the next president and Congress tackle the nation’s toughest conservation challenges. Among them:

Ensuring clean water. Fish, wildlife and human populations across the United States have a critical need for clean, abundant water. Wetlands from the Mississippi Delta to the Prairie Pothole region are vanishing. Lead recently contaminated the water supply in Flint, Michigan. Algal blooms forced Toledo, Ohio, to temporarily shut down its water supply, and algal slime now plagues parts of coastal Florida. It’s clear that investing in our nation’s water resources is vital. Yet a new Clean Water Rule that would afford protections to 20 million acres of wetlands and 2 million stream miles hangs in legal limbo at the Supreme Court and awaits implementation by the next administration. New appointees to head the EPA and U.S. Department of Agriculture will help shape policies to limit the runoff of fertilizers and pesticides that are fouling our waterways. Ultimately, restoring cherished waters across the country—from the Great Lakes and Chesapeake Bay to the Gulf of Mexico and Pacific Coast—needs to be a national priority, as it will have profound economic, public health and environmental benefits. 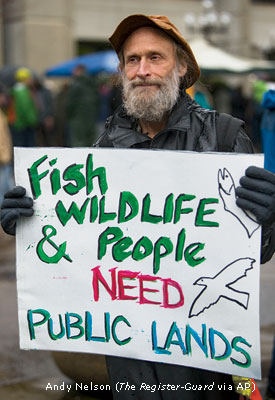 Safeguarding public lands. The armed takeover this year of Oregon’s Malheur National Wildlife Refuge symbolized a larger, insidious effort by those seeking to privatize federal public lands held in trust for all Americans. The next president and Congress are certain to face privatization schemes designed to place public lands in private hands, putting wildlife and wild lands at risk. Our leaders will need to fight that trend and improve public land management, starting with the U.S. Forest Service, which now must spend more than a third of its annual budget on fighting wildfires, leaving little for habitat restoration. The administration will have opportunities to set aside new conservation areas to protect lands vulnerable to development. It will also need to decide how to balance oil and gas leasing, mining and other extractive industries against the need to safeguard wildlife and local economies. This will involve finalizing reforms of the federal coal-leasing program to fully account for the costs to wildlife, habitat and communities as well as considering whether to propose phasing out federal subsidies for oil drilling, mining and other extractive activities on public lands.

Frustrated by the armed takeover of the Malheur National Wildlife Refuge, a protester joins a rally in Eugene, Oregon, to urge an end to the occupation. The next president will need to fight efforts to privatize public lands.

Curbing invasive species. Harmful nonnative plants and animals like Asian carp in the Great Lakes or Burmese pythons in the Everglades threaten our native wildlife, undermine natural ecosystems, clog waterways and serve as vectors for human disease. By some estimates, invasive species cause up to $120 billion in damages each year, a burden on American taxpayers and economies. The next Congress and administration urgently need to modernize rules for importation of potentially harmful live animals into the United States, provide funding for research on the problem of emerging wildlife diseases and strengthen rules and technologies for treatment of ballast water, the source of many invasive incursions. 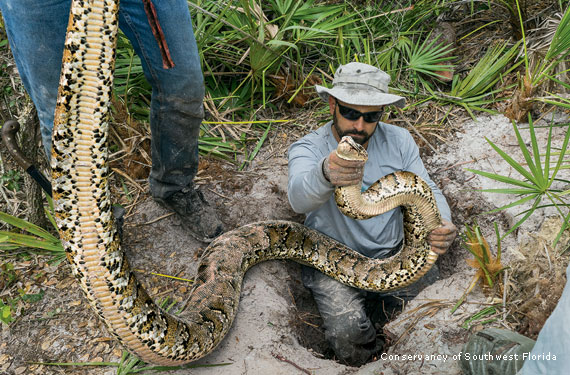 Biologists captured this Burmese python in a 2016 project that removed more than 2,000 pounds of the invasive snakes from Collier County, Florida.


Conserving native grasslands. Scientists warn that grassland birds and other species in the northern Great Plains are reaching a tipping point as thousands of acres of native prairie—one of the fastest declining ecosystems in North America—continue to be converted to cropland. This is due in part to the Renewable Fuel Standard, which requires growing corn for ethanol. The next administration will need to decide how much corn should be mandated. Congress also will need to reauthorize the Farm Bill, an opportunity to eliminate incentives that encourage plowing up native grasslands and strengthen incentives farmers have for saving grasslands on their property. 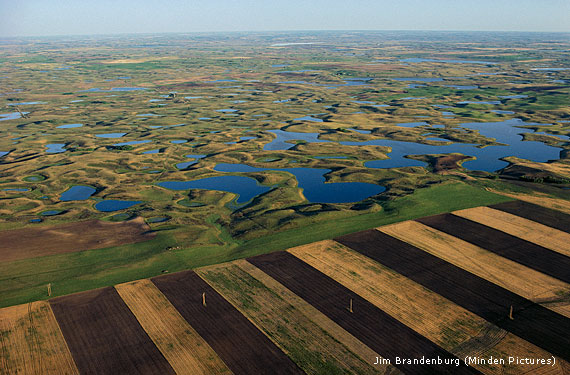 To the north, farmlands encroach on Prairie Potholes in North Dakota, where the loss of grasslands and wetlands is harming native birds.


Promoting coastal resilience. Much needs to be done to ensure the restoration and resilience of imperiled coastal systems at risk from climate-related threats such as rising seas and more severe storms. Curtailing National Flood Insurance Program subsidies for development in sensitive coastal areas and along major rivers can reduce risk to communities and improve wildlife habitat. The U.S. Army Corps of Engineers—charged with flood control—is strained by a project backlog of up to $80 billion yet has only a $2 billion annual construction budget. It will therefore need to put less emphasis on costly dikes, sea walls and levees and more on restoring wetlands, building dunes and pursuing other nature-based solutions that afford both storm and wildlife protection.

Funding wildlife recovery. State wildlife agencies have identified some 12,000 species that are in need of focused conservation efforts. Unfortunately, most funds available to states for wildlife recovery come from license, permit and excise-tax revenues related to hunting and fishing. This money has enabled states to recover numerous species such as elk and wild turkeys but is insufficient to protect species that are not hunted or fished, including monarch butterflies and salamanders. Newly proposed bipartisan legislation—the Recovering America’s Wildlife Act—would dedicate $1.3 billion from federal oil and gas revenues to state wildlife agencies to address this funding gap. If passed, the new funds could help prevent thousands of species from being listed under the U.S. Endangered Species Act—a huge payoff. 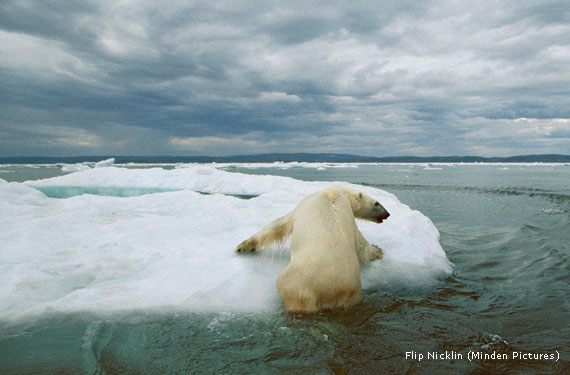 A polar bear in the Canadian Arctic hauls out on ice. Vital for polar bear survival, sea ice is melting as the climate warms.


Confronting climate change. A warming world stresses wildlife, habitat and human communities by causing more severe forest fires, floods, droughts, habitat shifts, heat waves, sea level rise and ocean acidification. New EPA rules to limit carbon pollution from power plants have been stalled by legal challenges. Even if these rules are implemented, avoiding the worst impacts of climate change will require steps such as limiting methane pollution from oil and gas operations, promoting the expansion of responsibly sited renewable energy—including offshore wind and rooftop solar—and reforming federal fossil-fuel leasing to account for greenhouse gases and the wildlife-related impacts of extraction. Ultimately, the government should assign a price to carbon emissions, the most efficient and effective market-based policy to curb pollution. 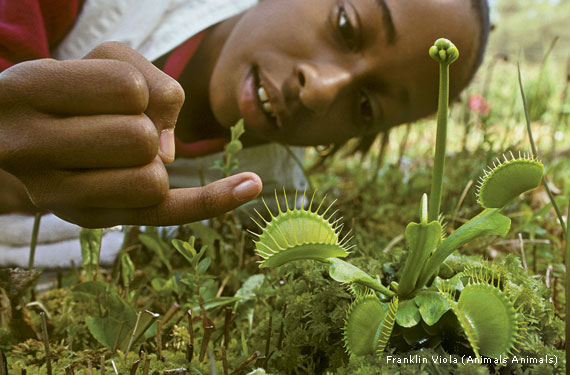 In Roswell, Georgia, a girl’s curiosity ignites when she spies a Venus flytrap. Such personal connections with nature enrich children’s lives—and may ensure nature’s survival.


Engaging kids with nature. Today’s young people will need the knowledge and skills to address far-reaching environmental problems and to create a more sustainable and prosperous future. So policy leaders must rethink how students learn about nature, energy, water and the broader environment and how they mesh this knowledge with skills in science, technology, engineering, economics and math. Federal education policies that more effectively support environment-based learning, including the states’ implementation of new science-education strategies, can play a major role in connecting children to nature, which will ultimately make their lives healthier and our nation more competitive in the global economy.

The next administration can do a lot for conservation—and so can you. The National Wildlife Federation encourages you to press all candidates to define their plans for protecting wildlife. You also can go to www.nwf.org/pledgeforpubliclands to urge candidates to pledge not to sell off or transfer treasured public lands such as wildlife refuges. Your actions will support NWF’s mission: To ensure wildlife thrive in a rapidly changing world.

Adam Kolton is vice president of national advocacy for the National Wildlife Federation.