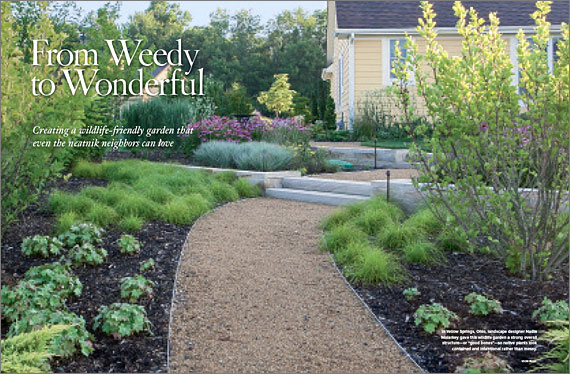 
FOR TOO MANY PEOPLE, the words “native wildlife garden” conjure up images of scruffy meadows filled with an impenetrable tangle of prickly brambles, crabgrass and overgrown flowers flopping over each other and onto sidewalks and driveways—in short, a hot horticultural mess that can drive the neighbors crazy.

But “a native wildlife garden does not have to be messy,” says Mary Phillips, director of the National Wildlife Federation’s Garden for Wildlife™ program. “It does not have to annoy your neighbors.” Luckily, she adds, a number of pioneering landscape designers have come to the rescue, creating model landscapes across the country that appeal both to wildlife and  people—and employing strategies that most of us can easily replicate in our own backyards.

“Increasingly, landscape professionals are taking an ecological approach to their work,” writes Travis Beck in Principles of Ecological Landscape Design, his primer on creating gardens that promote environmental health. As evidence, Beck, director of horticulture at Delaware’s Mt. Cuba Center—a botanical garden that showcases native plants—points to the Sustainable Sites Initiative, a five-year-old certification system for landscapes that work with local hydrology and other natural processes to promote clean water, healthy soils and other “ecosystem services” as well as thriving populations of native species.

For many of these designers, the work of Joan Nassauer, a professor of landscape architecture at the University of Michigan, has been an inspiration. Most Americans view “a neat, orderly landscape as a sign of neighborliness, hard work and pride,” writes Nassauer in her influential 1995 paper in Landscape Journal, “Messy Ecosystems, Orderly Frames.” In residential neighborhoods, she notes, “people tend to perceive landscapes that exhibit biodiversity as messy, weedy and unkempt” because they tend to be mistaken for properties that are not cared for. But when biologically diverse gardens contain what she calls “cues to care,” they become more acceptable to neighbors.

The cues to care identified in Nassauer’s studies include well-defined garden edges—such as mowed strips between sidewalks and planting beds—as well as trees and other plants displaying lots of large, bright flowers. Her research suggests that bold planting patterns, linear planting schemes and architectural elements—from walls and window boxes to bird feeders, birdbaths and nest boxes—also signal a well-loved landscape. 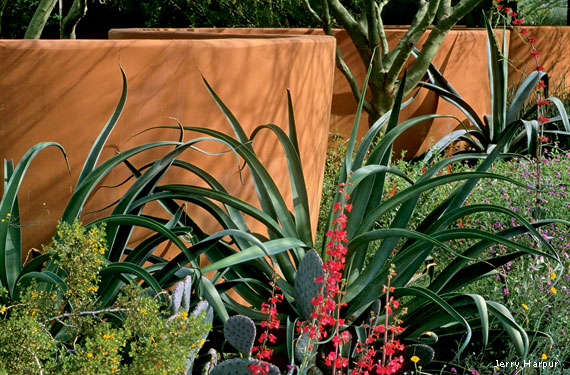 Broad-tailed hummingbirds (below) are among native wildlife species drawn to desert gardens designed by Steve Martino, which feature bold architectural elements such as colorful masonry walls.

Phoenix-based Steve Martino says that when he began designing landscapes 40 years ago, local native plants “were viewed as useless vermin to be eradicated.” Conceiving himself as a “set designer” out to demonstrate the beauty and utility of native desert denizens, he began showcasing them against bold architectural elements, particularly masonry walls in various shapes, from tall and flat to low and curvy. In Martino’s gardens, whiplike ocotillos, paddle-shaped prickly pears and other desert natives with dramatic silhouettes cast intricate shadows on these walls, which are painted striking colors, from flaming red to egg-yolk yellow. The walls also are a foil for more naturalistic plantings that feature feathery palo verde trees, silvery brittlebush and majestic saguaro cacti. The result is what Martino calls his signature “weeds and walls” style.

Martino could have called it his “weeds, walls and wildlife” style. “After observing these desert gardens for a while,” he says, “I discovered that native plants bring along their entourage of characters.” Hummingbirds sipping nectar from penstemons and javelinas munching on prickly pears make his gardens interesting, Martino says, and have made his clients “advocates for the desert.”

Across the country, Rick Darke, a landscape consultant and coauthor of The Living Landscape, employs what he calls “organic architecture” to frame spaces in his 1.5-acre garden in Landenberg, Pennsylvania. One example is a lawn path flanked by a linear planting called an allée, composed of parallel rows of trees, which serves as a walkway between garden areas.

But unlike traditional allées, in which the trees stand alone like solitary sentinels, Darke’s allée is inspired by the complex, vertical layers of native deciduous forest—from the tiniest mosses to the tallest trees—providing as many niches as possible for wildlife. Relying on organic architecture, he says, “means that more of a garden will be made of plants”—an essential consideration if home gardens are to play increasing roles in sustaining the country’s declining biodiversity. 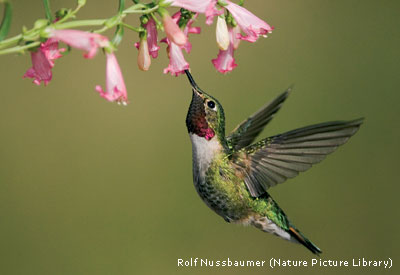 According to C. Colston Burrell, the principal of Virginia-based Native Landscape Design and Restoration, one design strategy in particular is key to making a yard as appealing to humans as to wildlife. “It’s really important to have a focal point,” he says. “Unless people have something to focus on, meadow or woodland gardens can look messy.”

A focal point can simply be a single knockout plant, Burrell notes, such as a native sourwood tree with its drooping chains of white, lily of the valley-like flowers that are beloved by bees. Burrell also uses carefully placed boulders to create groupings where the eye can rest. A sculpture or other artistic focal point, he says, “can make a huge difference.”

At Bird Hill, his home landscape in the Blue Ridge Mountains—which he describes as a “pastiche” of forest, meadow and other gardens—Burrell has added another cue to care: masses of wildflowers such as Virginia bluebells and woodland phlox to complement the plants that already were growing on the property. Masses of blooms “wow people,” he says, “and do a lot to reduce the messiness quotient” that many people associate with informal, naturalistic gardens. As a bonus, some of his plantings have turned into wild populations that are reproducing and expanding on their own, supporting local biodiversity. 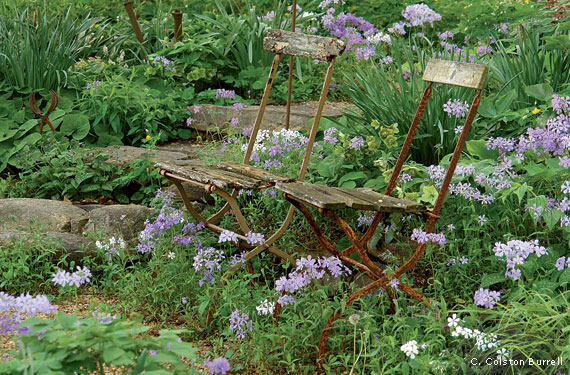 In Yellow Springs, Ohio, landscape designer Nadia Malarkey shows how a number of classic design strategies can give a garden strong overall structure—what professionals call “good bones”—and at the same time bring back native wildlife to a once-barren suburban lot. At one client’s home, a handsome bluestone terrace sets the stage for its entry garden, as do stone steps linked by gracefully curving gravel pathways with crisp metal edging. Along a walkway on the side of the house is a living wall of “pleached” or interwoven American beech trees, which, Malarkey points out, “are host plants for luna moths.” The path leads to a gentle slope where mixed perennial borders of prairie grasses and wildflowers spill over stone-wall terraces. This strong framework makes Malarkey’s exuberant, informal prairie plantings appear contained and intentional instead of unruly.

Throughout the garden, native perennials provide not only the drama of vibrant color and contrasting forms to please the human eye but also, in Malarkey’s words, “a nonstop sequencing of flowers” full of pollen and nectar for native bees, butterflies and other wildlife all season long. “Just 10 days after butterfly weed was planted, milkweed beetles showed up,” she says, followed soon by monarch butterflies. “Songbirds fly in and out,” she adds. “It’s been so exciting to see the life return.”

A formal design can make a native wildlife garden look appropriate in even the most traditional setting. A case in point is Mt. Cuba Center’s new South Garden, a native shrub and perennial border adjacent to a rectangular lawn between the former estate’s elegant home and Maltese cross-shaped pool. Brick garden walls and paths frame the border, enhancing what Beck calls “a very orderly layout.” In contrast to the typically scattered appearance of wildflowers in a natural meadow garden, each perennial was planted in bold blocks for visual impact, he says, and these blocks of color are repeated along the length of the border to reinforce the sense of order.

While the South Garden was not designed primarily as wildlife habitat, its native perennials have become pollinator magnets. “Within days of planting the garden, I saw bumble bees cruising through the area,” Beck says. He notes that some traditional design strategies are actually advantageous to wildlife. Cultivating each plant species in a large, bold block, for example, allows pollinators to forage more efficiently because they do not have to fly long distances between favored flowers. 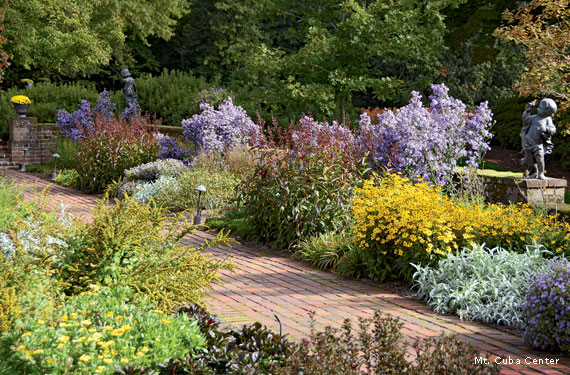 Other cues to care can mean ecological trade-offs. Neil Diboll, the president of Prairie Nursery in Westfield, Wisconsin, creates what he calls “refined prairie gardens” for homeowners: “native perennial gardens using lower-growing grasses and a variety of well-behaved prairie flowers.” The casualty of this approach, he notes, is biodiversity. Diboll calculates that, compared to diverse meadow plantings, gardens with just plants that are sufficiently showy and not too tall or too floppy are 50 percent less botanically diverse, with a resulting decrease in the variety of wildlife the landscape supports. Even so, he says, these refined gardens provide “high quality habitat to the pollinators and associated critters that consume them.”

Beck points out that routine garden practices can also limit a landscape’s ecological performance. Deadheading faded flowers and cutting back withered stems and seed heads in fall, for instance, prevent plants from reproducing and eliminate habitat for overwintering bees, caterpillars and other wildlife. But used judiciously, such practices may be necessary to maintain the appearance of order and tidiness.

NWF’s Phillips adds that “a little signage can go a long way” toward alerting neighbors that any design or maintenance strategy you employ is intentional rather than a dereliction of duty to keep your garden tidy. A sign can also help people understand, for example, that letting wildflowers go to seed helps feed birds during winter. “Nothing promotes wildlife gardening and community harmony more than a few savvy design strategies along with some signage and friendly conversations with your neighbors,” Phillips says. 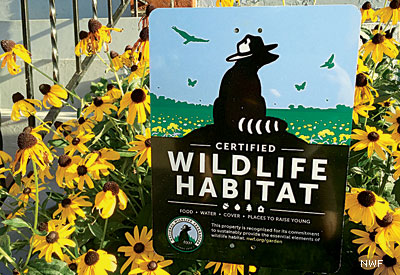 A prominent sign lets neighbors know that this yard is a National Wildlife Federation Certified Wildlife Habitat®—a property that provides native species with food, water, cover and places to rear young. The sign also signals that this homeowner’s design and maintenance strategies, such as leaving perennials standing in winter to feed wildlife, have a purpose. NWF’s Garden for Wildlife™ program offers many more tips for creating gardens that appeal to people while at the same time nurturing local wildlife.

Going Native
Being There for Bees
Corralling the Rain in Your Garden
Gardening With a Good-Neighbor Policy
Gardening for Wildlife Year Round
Backyard Habitat: Making Dollars and Sense in Your Yard