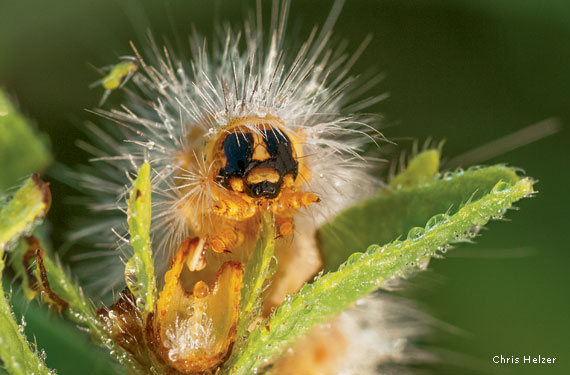 MORNING DEW BEADS on the bristles of a saltmarsh caterpillar as it enjoys a bite of hairy puccoon, a common prairie wildflower. “The dew added some nice light accents and kept the caterpillar from moving around a lot,” says photographer Chris Helzer, who captured the scene in Nebraska’s Niobrara Valley Preserve.

As director of science for The Nature Conservancy in Nebraska, Helzer often roams this 56,000-acre preserve, eyes open for the small creatures many people miss. “A lot of my job is sharing lessons about prairie management and restoration and trying to get people interested,” he says. “If people see prairies as just a bunch of grass, they’re not going to care. But if they start seeing the small flowers and creatures, it personalizes the habitat and makes it a lot harder to ignore or plow up.”

Roaming a vast sea of grass is its own reward for Helzer. “You can really lose yourself in the landscape,” he says, “which is why I like it.”