Once restricted to the continent’s midsection, this adaptable predator now roams from coast to coast 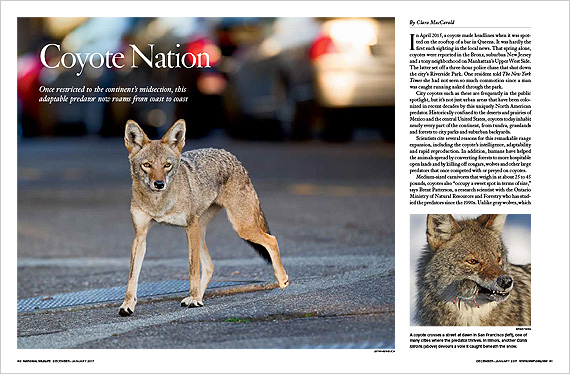 A coyote crosses a street at dawn in San Francisco (above), one of many cities where the predator thrives. In Illinois, another Canis latrans (right) devours a vole it caught beneath the snow.


IN APRIL 2015, A COYOTE MADE HEADLINES when it was spotted on the rooftop of a bar in Queens. It was hardly the first such sighting in the local news. That spring alone, coyotes were reported in the Bronx, suburban New Jersey and a tony neighborhood on Manhattan’s Upper West Side. The latter set off a three-hour police chase that shut down the city’s Riverside Park. One resident told The New York Times she had not seen so much commotion since a man was caught running naked through the park.

City coyotes such as these are frequently in the public spotlight, but it’s not just urban areas that have been colonized in recent decades by this uniquely North American predator. Historically confined to the deserts and prairies of Mexico and the central United States, coyotes today inhabit nearly every part of the continent, from tundra, grasslands and forests to city parks and suburban backyards.

Scientists cite several reasons for this remarkable range expansion, including the coyote’s intelligence, adaptability and rapid reproduction. In addition, humans have helped the animals spread by converting forests to more hospitable open lands and by killing off cougars, wolves and other large predators that once competed with or preyed on coyotes.

Medium-sized carnivores that weigh in at about 25 to 45 pounds, coyotes also “occupy a sweet spot in terms of size,” says Brent Patterson, a research scientist with the Ontario Ministry of Natural Resources and Forestry who has studied the predators since the 1990s. Unlike gray wolves, which top the scale at 60 to 140 pounds or more, coyotes can survive on a diet of small prey like mice and voles. Because of their lower energetic requirements and diet flexibility, the predators can live in small habitat patches, a clear advantage in human-dominated landscapes. 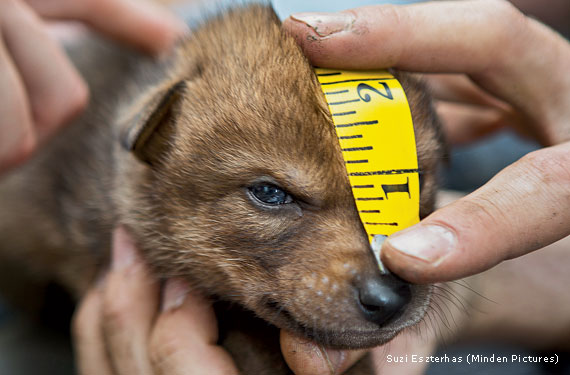 Biologists with Chicago’s Urban Coyote Research Program measure a 4-week-old coyote pup. Among other findings, the scientists have discovered that city coyotes prefer natural foods such as mice over garbage or pet cats.


While the impact of coyote expansion is complex, there is evidence the carnivores can benefit some wildlife, especially birds, by keeping other predators at bay. In a landmark 1999 study published in Nature, scientists in southeastern California found that patches of sage-scrub habitat with resident coyotes had a higher diversity of native birds, including California quail, spotted towhee and Bewick’s and cactus wrens, than patches without coyotes. The likely reason, the researchers said, is that more coyotes mean fewer small predators such as opossums, raccoons and, especially, domestic cats. Each year free-ranging cats kill billions of birds and mammals nationwide.

In more recent work, Roland Kays, head of the North Carolina Museum of Natural Sciences’ Biodiversity Lab, enlisted hundreds of citizen scientists in six eastern states to survey cats, coyotes and other mammals using camera traps at 2,117 sites, including protected wild lands, city parks and residential backyards. Their results, published in 2015 in the Journal of Mammalogy, showed that in protected areas, coyotes were abundant while cats were rare. The opposite was true in suburban yards, where coyotes were rare and cats were 300 times more abundant than in protected areas. Cats appear to be avoiding habitats where coyotes roam, Kays says. Native to North America, coyotes rarely prey on the songbirds killed by cats, which are nonnative. Thus coyotes “restore a balance of nature by controlling invasive predators,” Kays says.

At the same time, coyotes prey on domestic cats far less frequently than pet owners fear. In Chicago, biologists with the Urban Coyote Research Program analyzed more than 1,400 coyote scat samples to determine what the predators eat. The most common foods were small rodents (42 percent of samples), fruit (23 percent), deer (22 percent) and rabbit (18 percent). Less than 2 percent contained signs of either garbage or cats.

“There’s not as much predation on domestic animals as most people think,” says David Drake, a wildlife ecologist at the University of Wisconsin–Madison who recently launched a long-term study of coyotes in and around that city. Drake says preliminary analysis of his scat data suggests that Madison coyotes also prefer natural foods such as mice over garbage and pets.

Sometimes, coyotes have a negative impact on wildlife, including endangered species. When 137 black-footed ferrets were released in Arizona, Montana and South Dakota in the 1990s, for example, coyotes killed at least 37 of the 55 ferrets that died within the first 14 days after release. Coyote predation also “has been an issue for an endangered caribou population on the Gaspé Peninsula” in Canada, says Patterson. “Coyotes occupy just about every niche on the continent, so it makes sense that their role varies across space and time.”

Rarely, coyotes do go after cats, dogs and even people, particularly when they have grown accustomed to viewing humans as providers of food. To some authorities, killing the predators is the answer to such incidents, but these efforts inevitably fail to reduce coyote numbers.

Indeed, for much of the 20th century, the U.S. government invested tens of millions of dollars killing millions of coyotes—a program that continues on a smaller scale today. (A little known federal agency, Wildlife Services, shoots some 80,000 coyotes annually in response to concerns from the livestock industry.) Unlike wolves, which succumbed quickly to such “predator control” measures, “decades of intensive persecution ... did not eradicate coyotes,” writes Dan Flores in his 2016 book Coyote America. “Yet the unrelenting pressure on them did invoke an ancient coyote biological imperative: It triggered larger litters of pups and colonization behavior that pushed them into new settings everywhere”—the species’ stunning range expansion that Flores calls “coyote Manifest Destiny.”

In Southern California, the City of Calabasas is seen as a model for human-coyote coexistence. After abandoning lethal control in 2011, authorities now encourage human behavioral changes, from scaring coyotes with loud noises to keeping food from them, so the predators do not become habituated and create a potential danger. “Most people are unaware they are unintentionally attracting coyotes to their yards,” says Randi Feilich, a Calabasas resident and representative of the conservation group Project Coyote. Pet bowls, bird feeders that attract rodents, accessible trash cans and even fallen fruit can lure coyotes. Pets also can draw unwanted attention. “In my neighborhood,” says Feilich, “people have taken measures to protect their pets—mostly bringing them in at night” when coyotes tend to hunt.

Feilich says people move to Calabasas to be surrounded by beautiful, open space. Most of them also realize they are moving into coyote country. But whether we move into their space or they move into ours, these adaptable predators are here to stay. Fortunately, humans also are an adaptable species. We might even learn to be good neighbors ourselves. 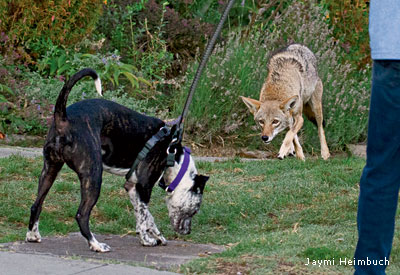 In San Francisco, a coyote seems ready to play or pounce as a pet dog pauses with its owner. Coyotes that become habituated to people or pets pose a potential threat and may become labeled as nuisance animals, which are often killed. Here are some ways to prevent such coyote conflicts:

Do not feed coyotes: Feeding coyotes—even unintentionally—may cause them to lose their fear of humans and ultimately consider people or their pets as possible prey. Avoid leaving out pet food or garbage at night. Coyotes also may be drawn to the squirrels and other rodents that gather spilled seed from bird feeders.

Do not let pets run loose: Cats and dogs left outside, even in yards with fences, may be at risk for coyote predation. While electric fences can keep pets in, they do not keep coyotes out. When walking dogs in parks, keep the animals on leashes.

Do not run from coyotes: Most coyotes try to avoid people, but may not if they have become accustomed to humans. If you are approached by a coyote, try yelling, waving your arms or throwing something. Do not run away, a behavior that might make you appear to be potential prey.

Clara MacCarald is a writer in Ithaca, New York.