Powerful images of wilderness can inspire conservation action. “Take a look,” they say. “Then take a stand.” 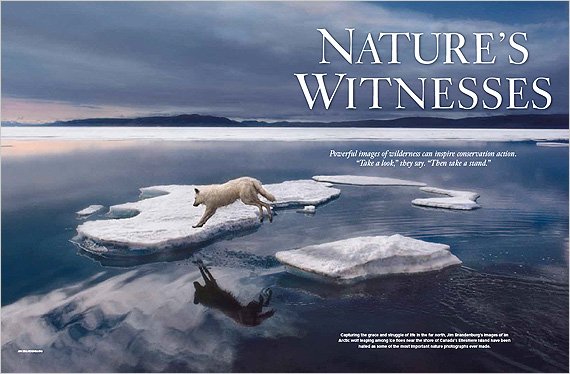 Capturing the grace and struggle of life in the far north, Jim Brandenburg’s images of an Arctic wolf leaping among ice floes near the shore of Canada’s Ellesmere Island have been hailed as some of the most important nature photographs ever made.

SOME OF AMERICA'S MOST PRIZED LANDSCAPES have peaks named to honor the early conservation photographers who helped these wild lands gain lasting protection. Yosemite’s Mount Watkins and Yellowstone’s Mount Jackson are tributes to Carleton E. Watkins and William Henry Jackson, trailblazing 19th-century photographers whose images of these monumental western lands provoked awe when they were exhibited back East in the 1860s and 1870s. In vogue at the time, the photographs are widely credited with helping drive passage of the laws that made Yosemite the nation’s first federally protected landscape in 1864 and made Yellowstone America’s first national park in 1872. 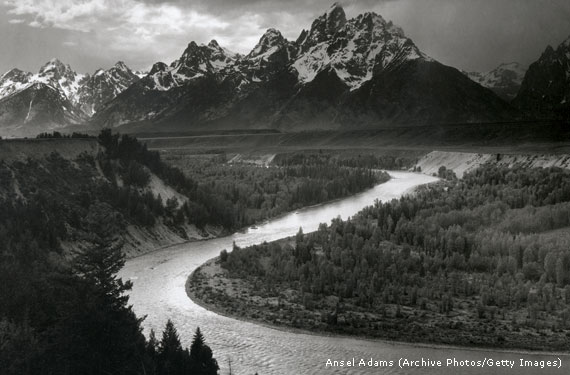 In the early 1940s, Ansel Adams immortalized the Snake River curving through Wyoming's Grand Teton National Park. He used light and shadow to convey the feeling of standing in America's most majestic landscapes.

Yosemite is also home to a mountain named for Ansel Adams, whose luminous black-and-white landscapes are perhaps the best-known images of the American West ever created. Though some critics have called his vision idealized, even sentimental, Adams believed that the opportunity to encounter untrammeled nature was a human right, as crucial to a thriving nation as political liberty or economic opportunity. He used the popularity of his photography and his own status as a respected artist to crusade for conservation throughout his life, personally lobbying leaders at all levels of government to protect wilderness and limit commercial intrusion into wild lands. 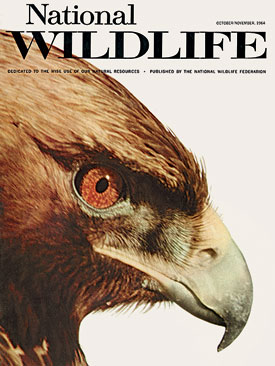 This capacity of photography to focus public attention on critical issues helped inspire the National Wildlife Federation to launch National Wildlife® magazine in 1962. “We wanted a tool to interest more people in the vital challenges that lie ahead,” former NWF Executive Director Thomas Kimball wrote in the October–November 1963 issue. Six months later, the magazine made its first foray into photo-rich coverage of international wildlife with “African Game in Trouble.” The dramatic close-up of a golden eagle that ran on the October–November 1964 cover (left) anticipated by some 40 years the studio-style animal portraits that photographers such as Joel Sartore and Clay Bolt now use to cultivate awareness of biodiversity at risk.

Some contemporary photographers embrace the Adams-style role of image-maker as activist, yet in starker terms. Robert Glenn Ketchum, for example, calls his work “photography in the service of conservation advocacy.” From New York’s Hudson Valley to Alaska, he has spent decades creating images that define tough environmental choices, spotlighting how human activity can degrade pristine lands.

In the Field, Ethics Come First

Though her projects are not as overtly political as Ketchum’s, Suzi Eszterhas sees herself as mission driven, too. “I’m a wildlife lover with a camera,” she says—but the animals always come first. Ethical standards that prioritize the well-being of wildlife over the drive to “just get the shot,” Eszterhas says, are what makes conservation photography a distinctive and powerful practice. Sharing this conviction, National Wildlife promotes ethical guidelines for wildlife photographers to encourage authentic images that place the welfare of wildlife first.

Engaging with wildlife in this way can forge a bond that lasts a lifetime. After three field seasons observing and photographing wolves on Ellesmere Island in Canada’s high Arctic in the mid-1980s, Jim Brandenburg found his final leave-taking from the pack “devastating,” he remembers. Three decades later, he still thinks about the Ellesmere wolves—now descendants of the animals he knew—and worries that global warming is altering the Arctic environment so rapidly that even these formidable creatures may not survive the change.

Such worries can be intense when working with critically endangered species. “Not a month goes by now that I don’t meet an animal that we know won’t make it,” says Sartore, whose National Geographic Photo Ark project is documenting many of the world’s most vulnerable creatures. “It’s sad, and it makes me angry at the same time,” he says. “With each one I say to myself, ‘Let this be a lesson for all of us.’ I just hope that we tell each species’ story well, and the world responds by saying, ‘Enough.’” 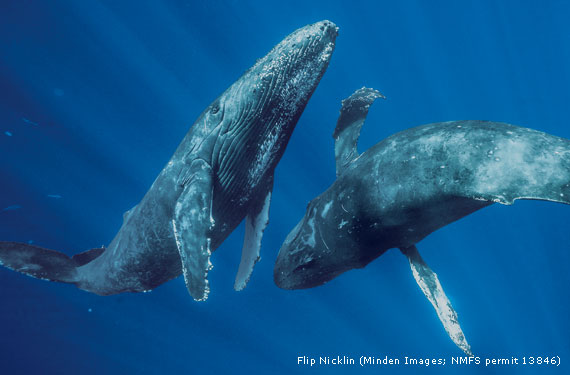 Two male humpback whales peacefully share the depths off the coast of Hawai‘i, a domain renowned whale photographer Flip Nicklin has brought to light for the world. Having photographed at least 30 species of whale in the world’s oceans during nearly 40 years, Nicklin’s images have helped scientists better understand the giant mammals—and nudged people to care about their salvation.

Thanks to Nicklin’s up-close, intimate portraits of humpbacks off Maui in the late 1970s, scientists learned that all singing humpbacks are male. “Flip was the first to illustrate that,” says researcher Meagan Jones.

In 2001, Nicklin, colleague Jim Darling and Jones founded Whale Trust Maui, a nonprofit that advances humpback research and conservation. “Flip is one of the best ambassadors for whales I know,” Jones says. “Photographs capture people’s imaginations in a way that graphs and data can’t.”

In the 1970s, fewer than 1,000 humpbacks survived around Hawai‘i. An international commercial whaling ban, enforcement of the U.S. Endangered Species and Marine Mammal Protection acts, and management aided by the kind of front-line science that Nicklin has long supported have all helped the whales rebound. Some 11,000 humpbacks now winter off the islands, and in 2016, federal authorities removed the Hawaiian humpback population from the U.S. endangered species list, a testament in part to the power of pictures. 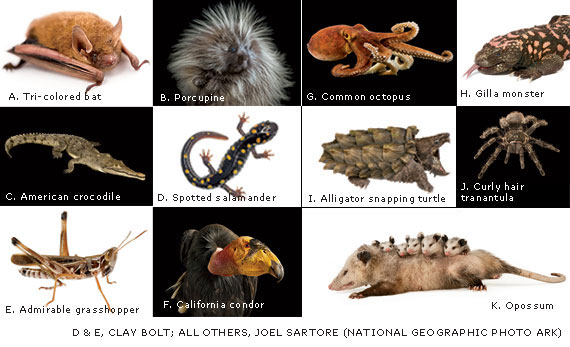 Sparking popular concern for creeping, slithery, prickly, scary and just plain homely species can test even the most gifted wildlife portraitist. Yet some photographers are willing to try.

Clay Bolt confesses he’s “obsessed with the little things in life,” such as the spotted salamander (D) and admirable grasshopper (E), both widespread in his native Southeast. Bolt’s collaborative photo project, called Meet Your Neighbours, celebrates animals that are common now in hopes that awareness will help shield them from becoming endangered.

Joel Sartore is committed to giving biodiversity a face—thousands of faces, in fact—through his Photo Ark project. So far he’s made portraits of some 6,400 animals in more than 150 zoos, aquariums and wildlife rehabilitation facilities around the world. The photos have appeared in books, museums, even on buildings at the Vatican. His goal is to document every species held in captivity, including North American natives from the critically endangered California condor (F) to the ubiquitous opossum (K).

Sartore admits that engaging viewers with charismatically challenged creatures can be tough. “It’s just human nature to be drawn more to koalas than lizards,” he says. “But the Photo Ark was really made to give a voice to the least among us. For smaller animals like frogs, toads, snakes and spiders, this may be the only chance for their tales to be heard.” 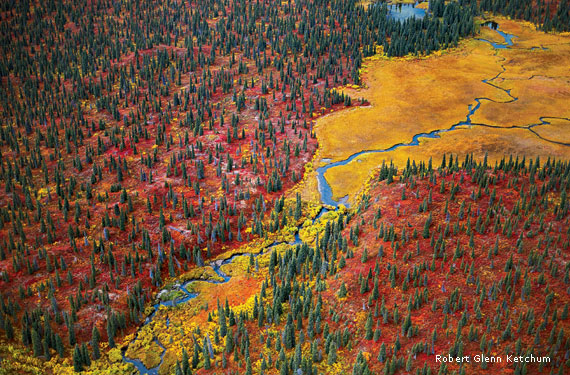 Latticed with rivers and streams that flow into Alaska's Bristol Bay, the spectacular woods and wetlands of the upper bay watershed can only be reached by plane. Aerial images such as this by Robert Glenn Ketchum show policymakers, reporters, scientists and others what’s at stake in this pristine ecosystem, which supports the world’s largest salmon run and legions of native plants and animals.

Renowned for his success in securing protection for a million acres of old-growth trees in Alaska’s Tongass National Forest, Ketchum joined a coalition of native community groups, fishermen, hunters and environmentalists—including the National Wildlife Federation and its Alaska affiliate at the time, the Renewable Resources Coalition—in a successful fight to protect Bristol Bay from catastrophic impacts of the proposed Pebble Bay mine, which would have been gouged from the heart of the watershed. 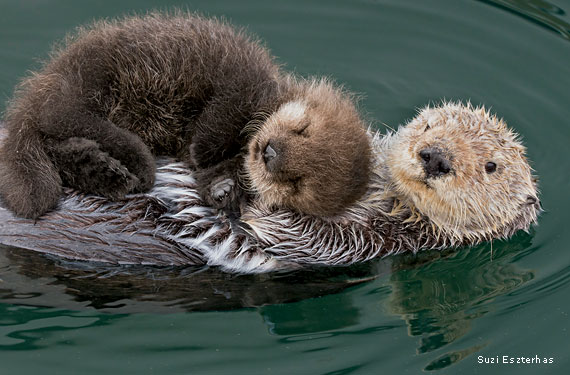 Cradling her days-old pup, a southern sea otter floats in California’s Monterey Bay. Photographer Suzi Eszterhas had “a glorious week” with this pair. “The trust was absolutely incredible,” Eszterhas says, “but it’s taken me 20 years of working with wildlife to get it.”

Eszterhas has photographed wildlife around the world, often covering the intimate life of mothers and babies. The key is to keep a respectful distance or, if working at closer range, to avoid stressing parents on high alert. “That was the secret with this mom,” she says. “I became part of her landscape.”

Bringing home extraordinary images of family life in the wild isn’t enough for Eszterhas. “I don’t want to just get pretty pictures,” she says. “I want to do something with them.” To that end, Eszterhas collaborates with a dozen groups working on issues she cares about, from animal welfare in the United States to wild cheetah conservation in Africa to orangutan protection in Indonesia to sloth research in Costa Rica. She uses the popularity of her photography to support such efforts directly. Through print and book sales, auctions, photo tours and appearances at events for donors, Eszterhas has raised more than $100,000 for conservation, reflecting a true labor of love. 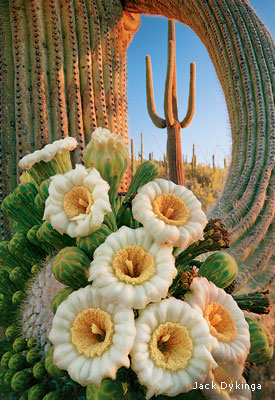 Plants are often treated as mere supporting players. But in the photographs of Jack Dykinga, the plant is the hero.

Saguaro cactuses can live for more than a century, but each 3-inch-wide flower lasts less than a day—opening at night and withering by the next midday. So capturing a large cluster of blooms at once requires patience.

For this image, Dykinga spent days scouting Arizona’s Saguaro National Park to find a cactus with a massive arm positioned to catch the dawn light and frame both its own blossoms and another imposing cactus nearby. For more than a week Dykinga returned to the spot, climbing a stepladder to monitor the progress of the buds. At last a perfect bouquet emerged. The sun rose, and a tribute to patience was born.

A long-time conservationist and Arizona resident, Dykinga worked to support creation of the nearly 500,000-acre Sonoran Desert National Monument in 2001. It protects abundant saguaro forests, along with what Dykinga calls “a sense of solitude, a solace from overstimulated urban life” unique to wild desert places. 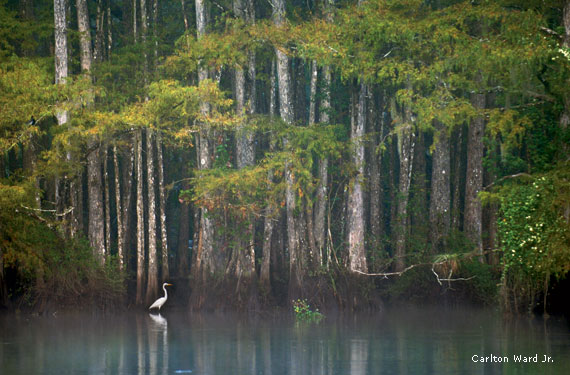 Still as the Florida pond where it hunts, a great egret watches for prey in the shade of a bald cypress thicket. In a state famous for resorts and retirement communities, such images of homegrown wilderness are often met with surprise, even disbelief, says photographer Carlton Ward Jr. But the eighth-generation Floridian means to change that.

It’s easy for societies to exploit nature when they’re disconnected from it “because they don’t get direct feedback on their behaviors,” he says. To help restore the connection, Ward founded the Florida Wildlife Corridor initiative in 2010. Since then he’s made two 1,000-mile treks through territories where bears and panthers roam free, using images from his trips to build support for a network of conservation areas and working lands to link Florida’s state and national parks into an unbroken sweep of habitat for wildlife. Nature needs such witnesses.