Make Your Yard a Spray-Free Zone

With many insect species in decline, gardeners can do their part to help protect these vital animals 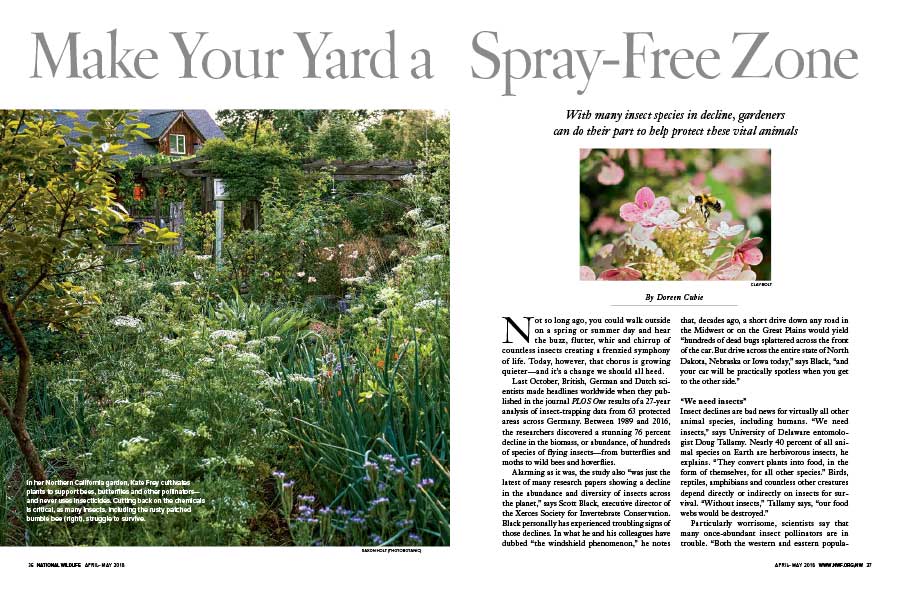 In her Northern California garden, Kate Frey cultivates plants to support bees, butterflies and other pollinators—and never uses insecticides. Cutting back on the chemicals is critical, as many insects, including the rusty patched bumble bee (right), struggle to survive.

NOT SO LONG AGO, you could walk outside on a spring or summer day and hear the buzz, flutter, whir and chirrup of countless insects creating a frenzied symphony of life. Today, however, that chorus is growing quieter—and it’s a change we should all heed.

Last October, British, German and Dutch scientists made headlines worldwide when they published in the journal PLOS One results of a 27-year analysis of insect-trapping data from 63 protected areas across Germany. Between 1989 and 2016, the researchers discovered a stunning 76 percent decline in the biomass, or abundance, of hundreds of species of flying insects—from butterflies and moths to wild bees and hoverflies.

Alarming as it was, the study also “was just the latest of many research papers showing a decline in the abundance and diversity of insects across the planet,” says Scott Black, executive director of the Xerces Society for Invertebrate Conservation. Black personally has experienced troubling signs of those declines. In what he and his colleagues have dubbed “the windshield phenomenon,” he notes that, decades ago, a short drive down any road in the Midwest or on the Great Plains would yield “hundreds of dead bugs splattered across the front of the car. But drive across the entire state of North Dakota, Nebraska or Iowa today,” says Black, “and your car will be practically spotless when you get to the other side.” 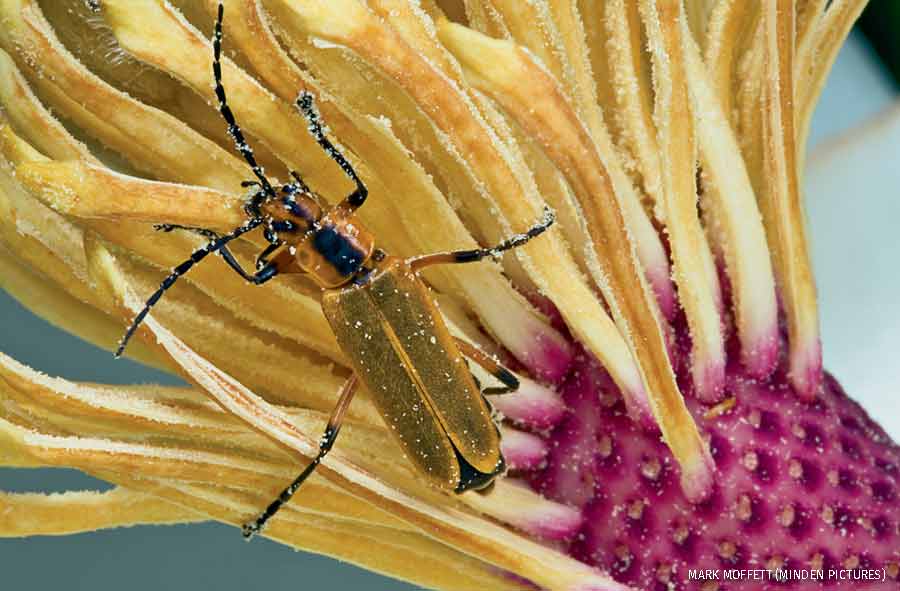 Predatory insects such as the soldier beetle and convergent lady beetle (below, feeding on aphids) help control garden pests for free. Attract such “good bugs” by avoiding insecticides and cultivating native plants that the insects need for food and cover.

Insect declines are bad news for virtually all other animal species, including humans. “We need insects,” says University of Delaware entomologist Doug Tallamy. Nearly 40 percent of all animal species on Earth are herbivorous insects, he explains. “They convert plants into food, in the form of themselves, for all other species.” Birds, reptiles, amphibians and countless other creatures depend directly or indirectly on insects for survival. “Without insects,” Tallamy says, “our food webs would be destroyed.”

Particularly worrisome, scientists say that many once-abundant insect pollinators are in trouble. “Both the western and eastern populations of the monarch butterfly have experienced dramatic decreases,” says Aimée Code, the Xerces Society’s pesticide program director. A paper published recently in Biological Conservation reported a 97 percent drop in the number of monarchs that overwinter along the California coast in the past 35 years. Eastern monarchs, which overwinter in central Mexico, have plummeted by more than 80 percent during roughly the same period.

Many North American native bees also are disappearing, says Code. Once common across much of the East and Midwest, the rusty patched bumble bee, for example, recently was listed as endangered by the U.S. Fish and Wildlife Service.

The reasons behind insect losses are complex—what Black calls “death by a thousand cuts”—and they include habitat loss, disease and climate change. But there’s no doubt that the widespread use of insecticides also is a major contributor, both on farms and in suburban yards. In fact, “many home garden products are just as toxic as those used in agriculture,” Code says.

That should be a rallying cry for wildlife gardeners, who can become a significant force to help stem insect declines. Here’s how you can eliminate, or at least cut back on, the use of insecticides in your garden:

Change in attitude. “We need to recognize that insect activity in a yard is good,” says Code. “Fewer than 2 percent are pests.” She also notes that most plants are resilient. “We should be a little more accepting of chewed leaves. The plants will survive.” National Wildlife Federation Naturalist David Mizejewski adds that it’s all about perspective. “Think about the last time you were in a beautiful natural area,” he says. “You probably didn’t notice that the plants had insect damage.” If you carry that attitude to your yard, mimicking Mother Nature, you are less likely to reach for the spray bottle. 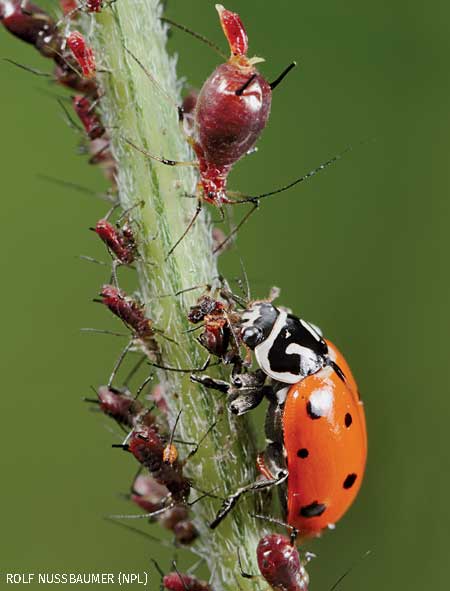 Good garden practices. “Have your soil tested,” says LayLa Burgess, an urban horticulture extension agent with South Carolina’s Clemson University. Some plants, such as blueberries, require a certain soil pH to thrive. Knowing your soil’s pH and the needs of your plants can help you grow what’s best for your yard. And keep your plants healthy with sufficient amounts of sunlight and water. They will be more likely to fight off pests. Burgess also recommends inspecting your garden frequently. “It increases the chances of spotting insect pests early,” she says. “Early detection is one of the best ways to manage and potentially prevent a pest problem.”

Identifying insects. Become familiar with all the insects in your yard, both good and bad. “Step one is to know your pest,” says Thia Walker, extension specialist for pesticide safety education at Colorado State University. For advice, she recommends contacting the extension service at your state land-grant university or sending questions to “Ask an Expert” at ask.extension.org. In many cases, when a new insect shows up that you don’t recognize, you can snap a photo and email it to an extension agent to find out if it’s anything to worry about.

Boost your beneficials. So-called beneficial insects can control your garden pests for free. Many beneficial insects—such as soldier beetles, assassin bugs and lacewing larvae—provide these services by consuming pest insects. Others, including many flies and wasps, are parasitoids that lay their eggs in the bodies of other insects, many of them pests, eventually killing their hosts. “One way to increase the number of beneficials in your yard is to stop or reduce the regular use of pesticides,” says Burgess. Cultivating native plants also will attract and support more of the good guys. Although it is possible to buy beneficial insects such as lady beetles and praying mantids from garden suppliers, many of these are nonnative species, and most will quickly fly away, providing only short-term, if any, relief from pest problems.

Don’t forget songbirds. “Attracting birds will help control pests,” Mizejewski says. Approximately 96 percent of backyard birds feed insects to their young, and the numbers can be staggering. “In addition, most birds hunt only about 160 feet from their nests,” he says, “so they can be very effective at controlling pests in your yard.” In any given neighborhood, Tallamy adds, “hundreds of thousands of caterpillars will be consumed by birds every summer.”

Insecticide alternatives. With a small pest outbreak, handpicking bugs may do the trick. Sometimes, dislodging insects with spray from a hose gets rid of them, as does pruning diseased or insect- infested plants. Traps or barriers also can help. (Burying coffee cans so the lips are flush with the soil surface can catch many nonflying insects.) “If you must resort to pesticides,” says Mizejewski, “use something that targets the specific pest and does not persist” such as insecticidal soaps or horticultural oils. “Even then, a pesticide is a pesticide,” he says, so it will likely harm good bugs as well as bad.

“If you garden for wildlife, then spray your yard with toxic chemicals, it defeats the purpose,” Mizejewski says. A backyard habitat is an ecosystem like any other, he adds: “You should build up a healthy food web—and always remember that what we do in our yards has an impact far beyond them.”

Doreen Cubie wrote about harmful effects of neonicotinoid insecticides in the February–March 2018 issue.

Nixing Neonics to Protect Pollinators »
Creating a Haven for Beneficial Bugs »
Being There for Bees »
Growing a Better Birdfeeder »
Garden for Wildlife: Organic Practices »
Get National Wildlife's Gardening Book: Tips for Seasons »