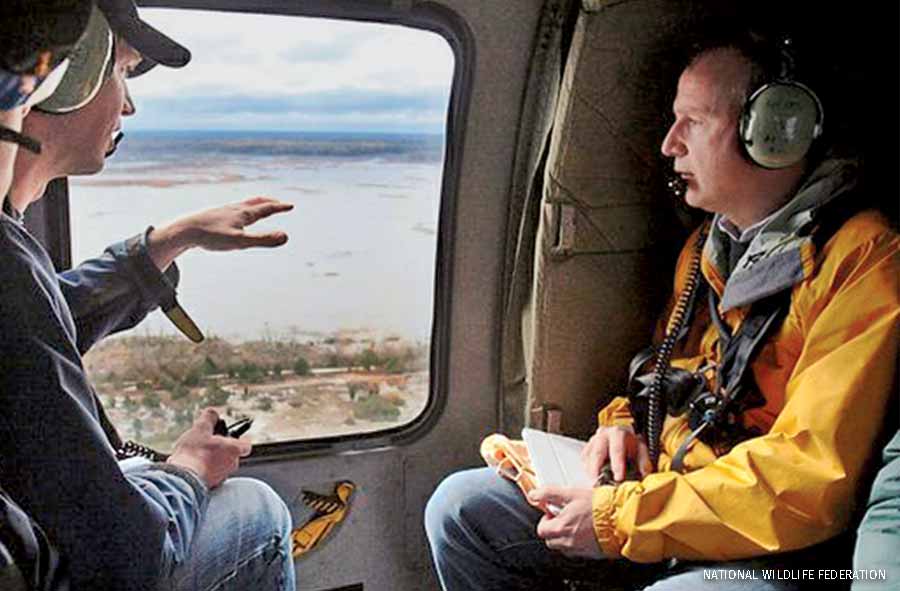 After Superstorm Sandy struck the U.S. East Coast in October 2012, Collin O’Mara (center) and then Delaware Gov. Jack Markell (right) surveyed the damage along the shore of the Delaware Bay.

IT HAS BEEN ALMOST A YEAR  since the devastating hurricane season that wreaked havoc on Puerto Rico, the Virgin Islands, Texas, Florida and other areas. Too many people are still without power and clean water. Many wildlife species are still struggling to recover. Yet we’re not acting upon lessons learned to minimize the damage from future storms.

One lesson that has become clear through recent years is that natural features—wetlands, forests, dunes, living shorelines, oyster reefs—are among the most effective defenses to protect communities. Places with healthier natural resources fare better in extreme weather events than places without such assets. But government policies continue to underinvest in the restoration and expansion of these natural systems while exacerbating damage by unwittingly encouraging development in high-risk areas.

The National Wildlife Federation and its affiliates have been hard at work with the U.S. Army Corps of Engineers and U.S. Congress to prioritize restoring our natural infrastructure as a primary strategy to improve community preparedness. We are aggressively pushing Congress to pass bipartisan reforms this year that will help save money, strengthen communities and increase wildlife populations.

We’re also working to reform the National Flood Insurance Program. While the NFIP has provided a safety net to help communities deal with flood devastation, it is now $25 billion in debt and in desperate need of reform. Perversely, it has created incentives that encourage people to build (and rebuild) homes on top of important natural resources and in the path of foreseeable flooding. Hazard mapping is not staying current with storm and flood science, and it fosters an overreliance on building expensive, hardened levees instead of maximizing natural systems and floodplains to absorb storm energy and minimize flooding.

To fix this, our Federation is working with a diverse, bipartisan array of partners—including taxpayer groups, insurance companies, community leaders and legislators—to develop common-sense NFIP reforms that will prevent rebuilding in repetitive-loss areas and modernize flood maps and floodplain management.

Flooding is natural, but disasters are exacerbated by man. We need to make wildlife habitats and communities more resilient—and that includes reforming well-intentioned yet flawed policies. If we don’t fix them, then who will?