The Secret Lives of Ice Algae 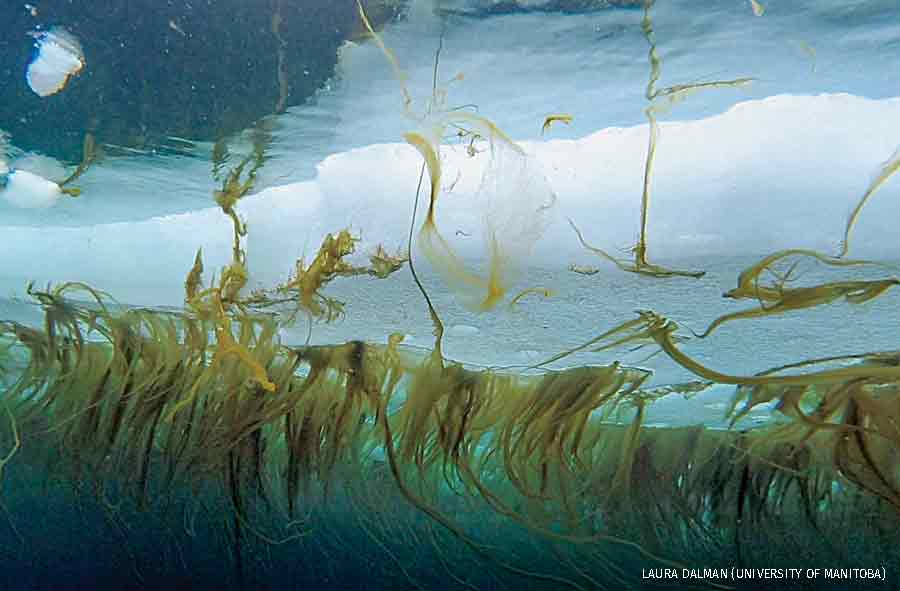 Strands of algae hang from sea ice in the Canadian subarctic. Biologist Rupert Krapp (below) celebrates after finding algae 500 miles from the North Pole.

SEA-ICE ALGAE LEAD MYSTERIOUS LIVES. Some hang like slimy greenish-brown beards from the underside of ocean ice while others thrive in tiny brine channels that form when seawater freezes. Essential to the survival of creatures from tiny krill to penguins, seals, polar bears and blue whales, ice algae are also elusive. That’s why scientists sail to the ends of the Earth to study them, and why I found myself a few years ago peering over the side of the Norwegian research ship Lance, zigzagging toward the North Pole.

Our international team of researchers pushed farther north than any of them had been forced to go before in search of continuous pack ice and algae. We found it about 500 miles from the North Pole, where our captain smashed the frozen seas to flip over massive chunks of ice so we could search for the telltale green-brown sludge of life. After several fruitless days, marine biologist Rupert Krapp wistfully recalled something a colleague had written a few years earlier about waning sea ice. “He joked that I might be out of a job in the next 10 or 15 years,” Krapp said. “And here I am. It looks like the stuff we were supposed to work with and sample isn’t to be found.” 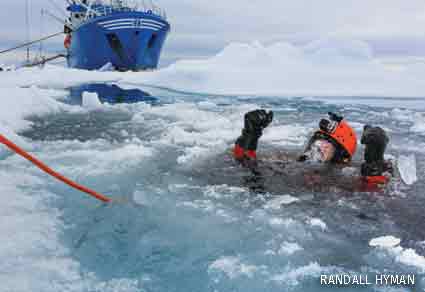 Based on 40 years of satellite photography, sea ice decline is hardly a joke. Arctic Ocean ice coverage in summer has plummeted 40 percent since 1980, and predictions are that the North Pole could be ice-free in summer by midcentury. So scientists are racing to answer questions about ice algae while there’s still time.

Unlike most plants, algae do not have flowers, stems, roots, leaves or vascular tissue— but they do have chlorophyll, which allows them to absorb light for photosynthesis. In polar seas, algae can be pelagic (blooming in open waters), benthic (living on the sea floor) or sympagic (blooming in or on ice). Sympagic sea-ice algae pack more fats and bloom several weeks earlier than their cousins, but their relative importance to the food web has been a mystery until recently.

A fat called IP25, produced only by sympagic ice algae, is yielding important clues. Scientists have long studied IP25 to detect ancient algal blooms in ocean sediment cores. But a few years ago, scientists began studying its presence in animals. In 2016, biochemist Thomas Brown of the Scottish Association for Marine Science became the first to spot IP25 at the top of the food chain. After analyzing the tissues of 55 polar bears, he showed that an average of 86 percent of the bears’ nutrition came from a food chain that originated with ice algae—a breakthrough for polar ecologists.

One of Brown’s colleagues, ecologist Katrin Schmidt at England’s University of Plymouth, began to study the fat’s Antarctic equivalent, IPSO25, in krill that had been collected 15 years earlier. Meticulous records of how deep and close the krill had been to pack ice led Schmidt to some startling discoveries.

The healthiest krill containing the most fat and IPSO25 were not just nearest the ice—they were anywhere that ice had been weeks earlier. And they were much fatter, much sooner, than krill feeding on pelagic algae farther from the ice zone. Apparently, ice algae have a broader, more enduring benefit than expected.

The presence of ice had further benefits. Turbulent seas limit photosynthesis by whisking algae away from surface sunlight. But by studying water column data, Schmidt learned that sea ice was calming turbulence in two ways. When it was there, it provided a protective lid; after it melted, it left a stable layer of freshwater atop the seawater, allowing various algal species to bask near the surface and photosynthesize for weeks.

The timing of peak ice-algae bloom is still a mystery. In northeast Greenland, scientists had assumed that the bloom started in June when there’s no snow limiting the penetration of sunlight through the ice. But ice cores taken in April, with 6 feet of snow and ice still atop the sea, proved otherwise. Though only 1/5000 of surface sunlight penetrated to the base of the cores, scientists found traces of chlorophyll, a sign of photosynthesis. 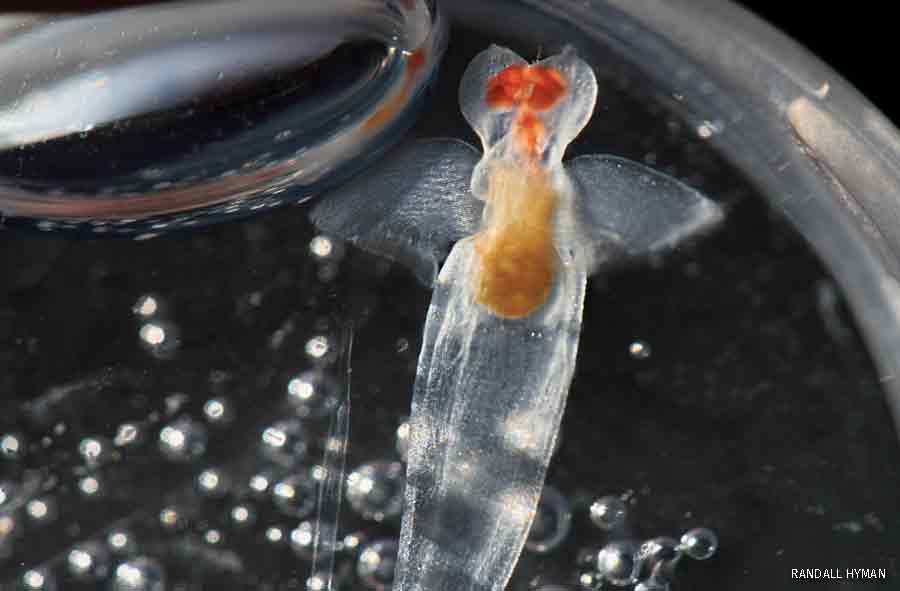 Arctic zooplankton, such as this tiny gastropod called a sea angel, draw nourishment from ice algae, the base of a vast food chain dependent on the presence of vanishing ice.

In recent years, satellite photos have revealed large pelagic algal blooms in increasingly ice-free seas. Some scientists hoped this might help combat climate change because, like all plants, algae take up carbon dioxide, a climate-warming gas. But there’s a dramatic downside for wildlife. Polar bears, seals and other animals need ice as hunting platforms. And as Schmidt showed, pelagic algae in open seas are no substitute for the nourishing sympagic algal community that thrives in the presence of ice.

Warmer weather and thinning ice could also kickstart the food chain too early, harming seabirds such as that nest on ocean cliffs in midspring and feed on fat-rich copepods that gorge on ice algae. If the algae bloom early and the copepods peak prematurely, little auk parents will have no food for their chicks.

Scientists now know that the ice itself is alive—a virtual food factory. As I saw aboard the Lance, ice algae are also elusive and in decline, raising the stakes for species such as krill and the animals that depend on them. When and how sea ice melts, along with when and where ice algae bloom, makes all the difference to wildlife at both ends of the Earth.

Randall Hyman is a science writer and photographer based in Missouri.