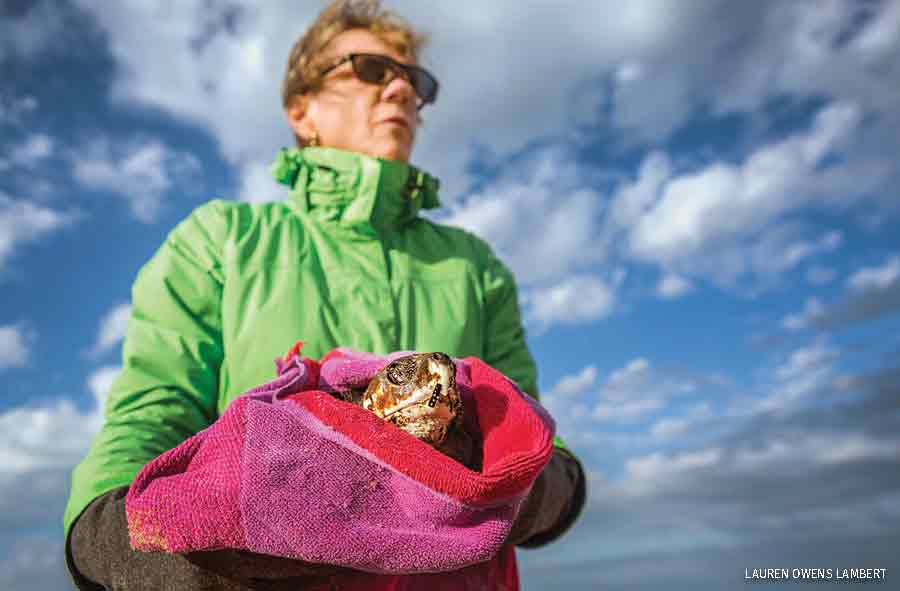 WITH A FIERCE WIND AT HER BACK, a volunteer walks a beach on Cape Cod looking not for seashells but for sea turtles. No matter that it’s December, pitch dark and 28 degrees F.

Marine turtles—especially endangered Kemp’s ridleys and greens as well as threatened—have been stranding on Cape Cod in winter for millennia as they travel south. Experts believe the turtles get confused by the horseshoe of land that forms Cape Cod Bay (aka the “deadly bucket”) and then become stunned by the cold.

“Their navigation program tells them to go south, and then they hit this barrier,” explains Connie Merigo of the New England Aquarium (NEAQ). “That geography paired with the New England winter is too much for them.”

Such strandings once averaged about 90 turtles per year, a number that “seems quaint now,” says biologist Bob Prescott, director of Mass Audubon’s Wellfleet Bay Wildlife Sanctuary. The average now runs about 320 a year, perhaps due to warmer summers delaying southern migrations or to shifts in the Gulf Stream. Tragically, last year the total topped 400 after a Thanksgiving cold snap sent 227 near-frozen turtles to shore in one weekend, many beyond saving. 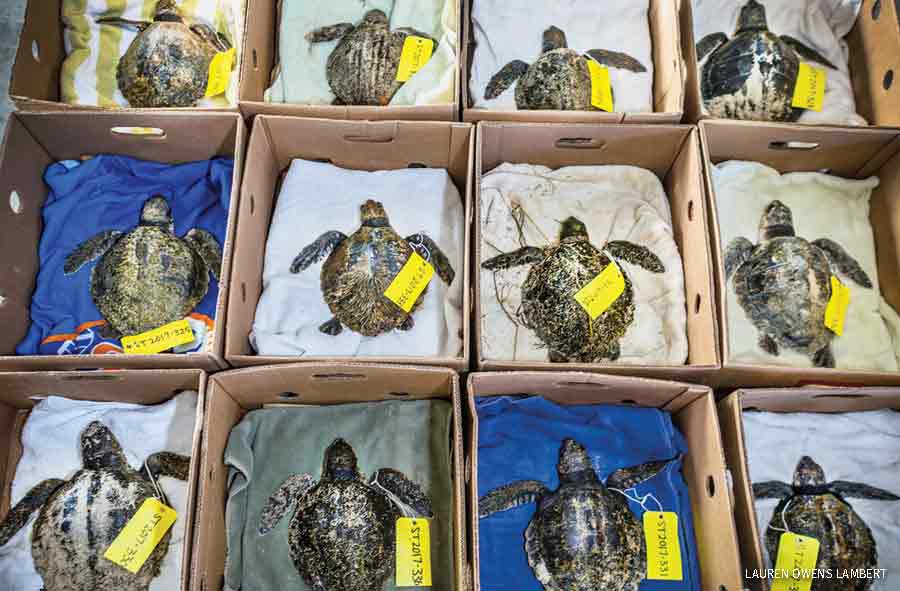 After assessment at the Wellfleet Bay Wildlife Sanctuary, boxed ridleys await shipment to the New England Aquarium for treatment before release.

With turtle populations also suffering from illegal harvest, incidental catch by fishermen, pollution, loss of nesting habitat and rising ocean temperatures, humans are stepping in to help the stranded turtles. Teams from Mass Audubon and NEAQ, plus many volunteers, work shifts from October to January, walking the beach to rescue victims.

Veterinarians treat injuries, hypothermia and pneumonia. Many turtles are flown in volunteer-piloted planes for rehab at NEAQ before release in warmer coastal waters from Cape Cod all the way to Mississippi.

Why try? “These individuals have survived nest predation, ocean predation ... they’ve already made it so far,” says Prescott. “With a little effort, we can put them back into the population.” Up to 90 percent of the rescued survive—a win for at-risk species.