Celebrating 2018 conservation successes, encouraging the next generation and more 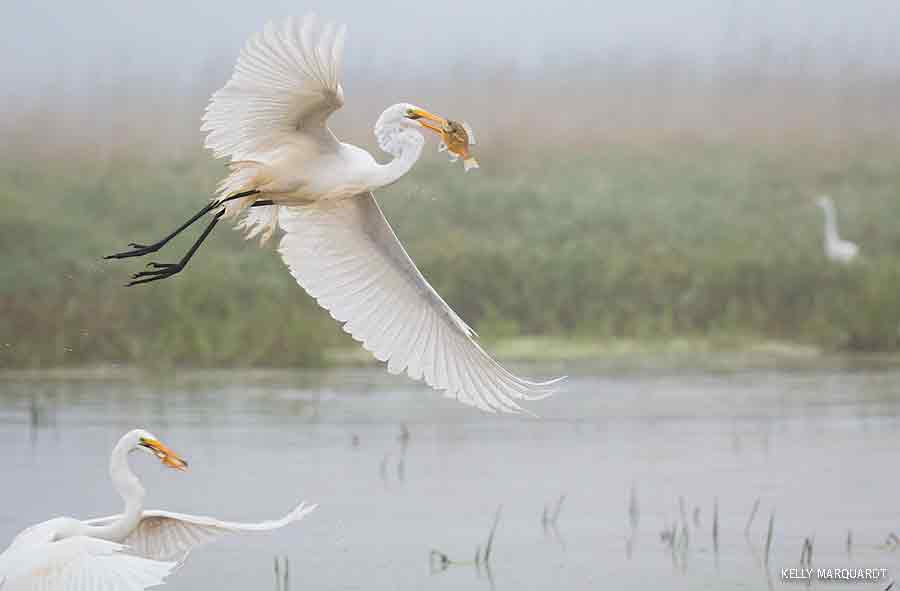 Egrets fishing in the Mississippi River in Reno, Minnesota.

EYES ON THE PRIZE

During the past year, the National Wildlife Federation and its 51 state and territorial affiliates made significant progress toward achieving the goals of NWF’s new strategic plan, which focuses on protecting habitat, strengthening wildlife conservation and connecting people with nature. With thanks for your support of this work, we present some of the year’s notable successes.

Fire and water are elemental opposites. But when it comes to conservation, restoring wetlands and the natural cycle of fire-prone landscapes is key to sustaining ecosystems critical for healthy wildlife populations.

In 2018, NWF helped protect rivers and wetlands by lobbying for the inclusion of conservation initiatives in the Water Resources Development Act (WRDA), which was signed into law in late October. The new WRDA advances construction of the Everglades Agricultural Area Reservoir, which will help reduce polluted discharges that trigger toxic algal blooms and allow fresh water to flow into the Everglades. It also forces the U.S. Army Corps of Engineers to consider natural infrastructure solutions for flood and hurricane defense, such as restoring inland floodplains, coastal wetlands and dune ecosystems that buffer against storm surge and flooding. “These reforms will help both people and wildlife,” says Melissa Samet, NWF’s senior water resources counsel.

The Federation met one of its top legislative priorities when comprehensive forestry reform was included in the appropriations bill passed in March. “This will ensure better safety in fire-prone areas by increasing the amount of dedicated funds for firefighting and prevention,” says Laura Daniel Davis, NWF’s vice president of conservation strategy. An added bonus: Cash critical for fighting a growing number of fires will no longer drain U.S. Forest Service and Bureau of Land Management budgets, freeing them for conducting forest restoration that could result in fewer fires. “By proactively restoring our forests and addressing the underlying conditions exacerbating megafires, we will ensure that our forests are healthier and future fire seasons are less destructive,” says NWF President and CEO Collin O’Mara.

Among other 2018 habitat victories:

• NWF prevented rollbacks to the National Environmental Policy Act, which is a check on potentially harmful development.

• The Federation helped block several legislative riders that would have weakened Clean Water Act protections and is suing to oppose any delay or repeal of the Clean Water Rule, which remains in effect in 22 states. 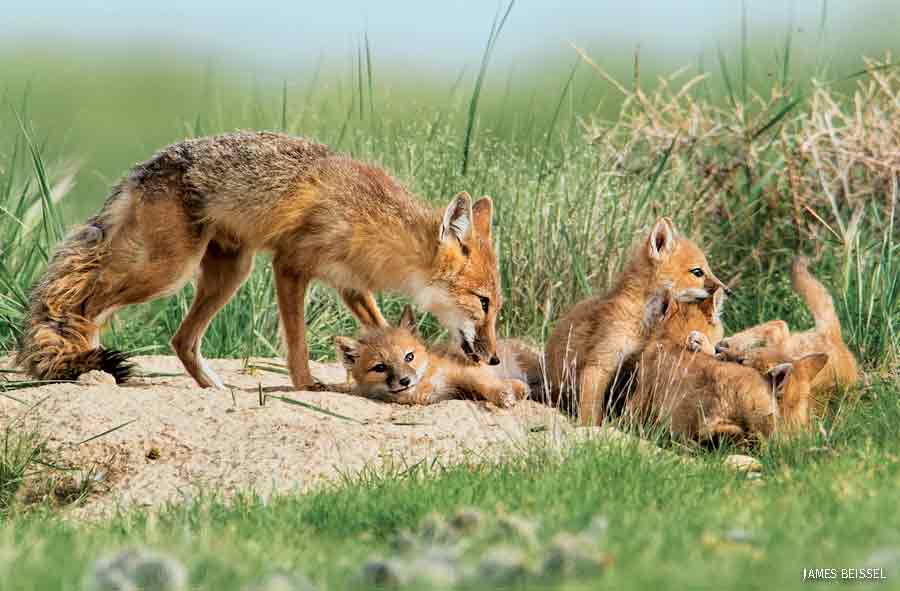 Oil and gas companies, politicians from both sides of the aisle, conservation groups and outdoor recreation businesses may seem like strange bedfellows. But thanks to strong leadership from NWF and its affiliates, many of these groups have come together to support the Recovering America’s Wildlife Act—a groundbreaking piece of bipartisan legislation that would redirect $1.3 billion in federal funds toward state programs to recover at-risk wildlife.

Currently, states get a large portion of their wildlife conservation funds from hunting and fishing license fees and taxes from the sale of hunting and fishing gear. Consequently, conservation has focused on fish and game species, leaving a vast number of nongame species—such as the swift fox (above) and California sister butterfly (below)—to suffer from inadequate funding.

State Wildlife Action Plans identify about 8,000 animal species in need of proactive conservation and specify how to help recover and protect these species, work that would be possible only with dedicated funding for boots on the ground. 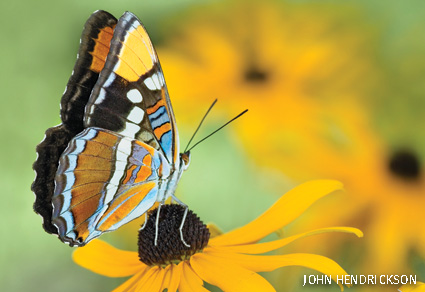 That’s where the Recovering America’s Wildlife Act comes in: It would tap existing government revenue generated from federal oil and gas lease sales and redirect it to funding wildlife action plans. Far from a one-time lump sum, the legislation would provide $1.3 billion every year, ensuring states reliable and consistent funding to restore species over time. “It’s a game changer,” says Naomi Edelson, NWF’s senior director of wildlife partnerships. “It would be the most significant amount of money for wildlife conservation in a generation.”

As this issue went to press, the bill had 113 U.S. House sponsors, with support almost equally divided between Republicans and Democrats. It is also supported by a huge national coalition including oil and gas companies, conservation groups and businesses. Why? “Because healthy wildlife and habitat mean a healthier business environment,” Edelson says. “It’s good for wildlife, it’s good for taxpayers and it’s good for business.”

Other major wins occurred during the recent midterm elections, when several states passed ballot measures backed by NWF and its state affiliates that support conservation. Among the most important wins:

• Georgia passed a measure to dedicate a percentage of sales tax from sporting-goods stores to support land conservation.

• Nevada approved an initiative demanding that the state draw 50 percent of its energy from renewable sources by 2030.

In addition to these victories, the Federation won lawsuits to maintain methane pollution limits set by the Bureau of Land Management and also won increases in federal renewable energy spending and climate-science research. 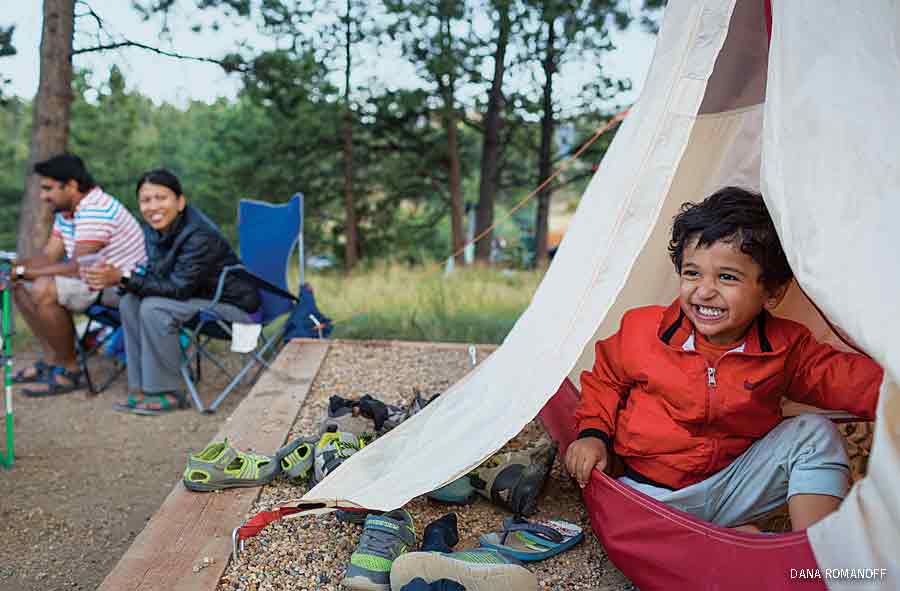 ENCOURAGING THE NEXT GENERATION

Recognizing the value of getting kids outdoors

In 2018, NWF continued to ring the eco-recess bell—helping 11 million students engage with nature and outdoor programming. By year’s end, the Federation was partnering with 13,600 U.S. schools through programs such as Eco-Schools USA and Schoolyard Habitats®, which help get students involved in green management of school grounds and curricula. These programs can include projects on waste management, water and energy conservation and how to help create certified Schoolyard Habitats (such as Discovery Hill in Austin, Texas, below). “We’re always growing, which means we’re connecting more kids with nature,” says Kim Martinez, senior director of NWF’s K-12 education programs. About half of all participating students come from diverse racial and cultural backgrounds. 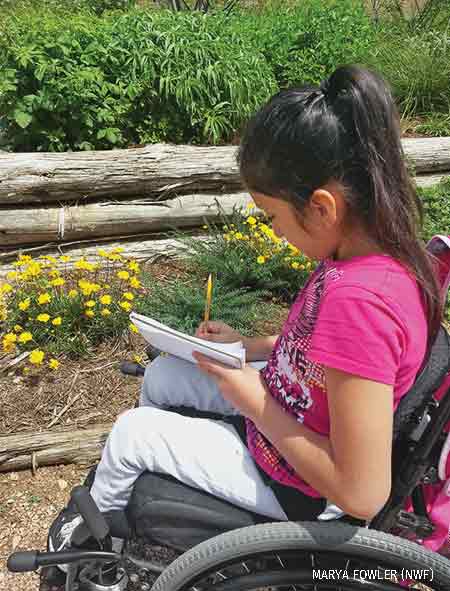 Campers from every state in the nation (including Colorado, above) participated, enjoying sites ranging from backyards and state parks to grand national parks. NWF also partnered with Yogi Bear’s Jellystone Parks, which has themed campsites across the country. The campaign ran from June through October, with many people camping during Great Outdoors Month® in June, organized in partnership with the Outdoor Recreation Roundtable. “It’s well-documented that spending time outdoors creates a lasting connection to nature and healthier, happier families,” says Josh Falk, NWF’s children and nature program manager. Among other 2018 victories that connect more Americans with nature, the Federation:

• Successfully advocated for $225 million in federal support for environment-based education, mostly via the national Elementary and Secondary Education Act.

• Expanded its Butterfly Heroes™ and Monarch Heroes programs, encouraging children to grow native plants for pollinators such as monarch butterflies.

A Game Changer Awaits Passage »
The U.S. Biodiversity Crisis »
Up Against a Wall »
Breaking the Prairie »
Read Last Issue's Working for Wildlife »