Observing 50 years of enduring stewardship for the planet 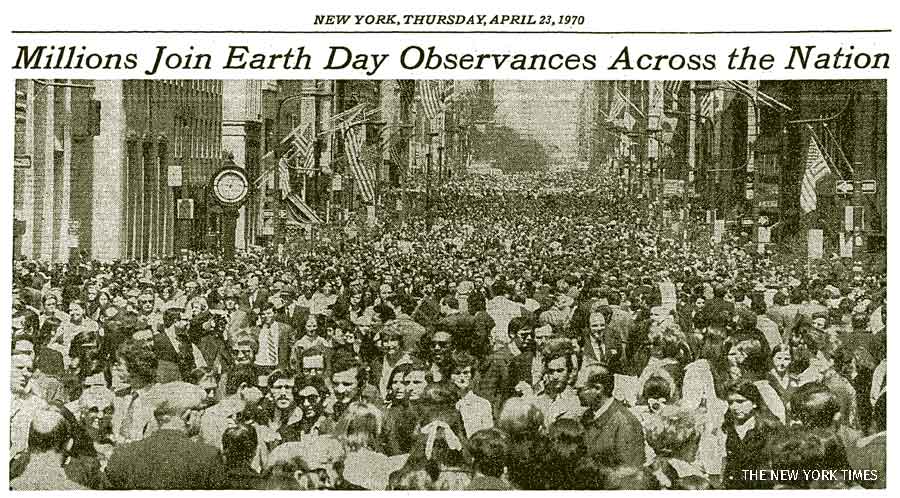 More than 100,000 people marched in New York City on the first Earth Day in 1970, the event’s largest U.S. gathering that year.

IN MANY WAYS, Earth Day was born in the muck of an oil spill. After an oil-well blowout offshore from Santa Barbara caused devastation along the California coast  in 1969, U.S. Senator Gaylord Nelson of Wisconsin worked with environmentalist Denis Hayes to organize and launch the first Earth Day on April 22, 1970—an event that drew some 20 million people into the streets from New York to San Francisco. And so began a new conservation movement, with an emphasis on “human health and the environment,” says Earth Day Network President Kathleen Rogers. Over time, the Earth Day celebration has become an international movement, inspiring the creation of scores of environmental groups and prompting legislation to protect the Earth.

Annual posters promoting Earth Day have featured famous artists such as Peter Max (above left) and Ivan Chermayeff (right), and also have urged action on behalf of the planet.

When the first Earth Day in 1970 drew millions of people into the streets, “it was such a shock to President Nixon and to Congress that they did a lot right away,” says Kathleen Rogers of Earth Day Network. They created the U.S. Environmental Protection Agency in 1970 and began developing landmark laws such as the Clean Water Act of 1972 and Endangered Species Act of 1973.

Discovery of a giant hole in the ozone layer over Antarctica in 1984 prompted creation of the Montreal Protocol of 1989. This international agreement led to the phaseout of a number of chemicals responsible for ozone depletion such as chlorofluorocarbons (CFCs) and related compounds.

In 1990, Earth Day went global, with events in more than 140 countries drawing hundreds of millions of people. In 1992, the United Nations held the Rio Earth Summit in Brazil, with a focus on global production of toxic waste and addressing the need for finding alternatives to fossil fuels for energy.

International treaties such as the Stockholm Convention (adopted in 2001) and the Kyoto Protocol (brought into force in 2005) drew commitments from scores of nations to limit the use of harmful chemicals and reduce greenhouse gas emissions, respectively. In 2007, Al Gore and the Intergovernmental Panel on Climate Change jointly won the Nobel Peace Prize for their efforts to inform people about the dangers of a rapidly shifting climate.