By providing nectar and other basic needs, you can enjoy a ringside seat to the aerial acrobatics of these tiny, winged jewels. 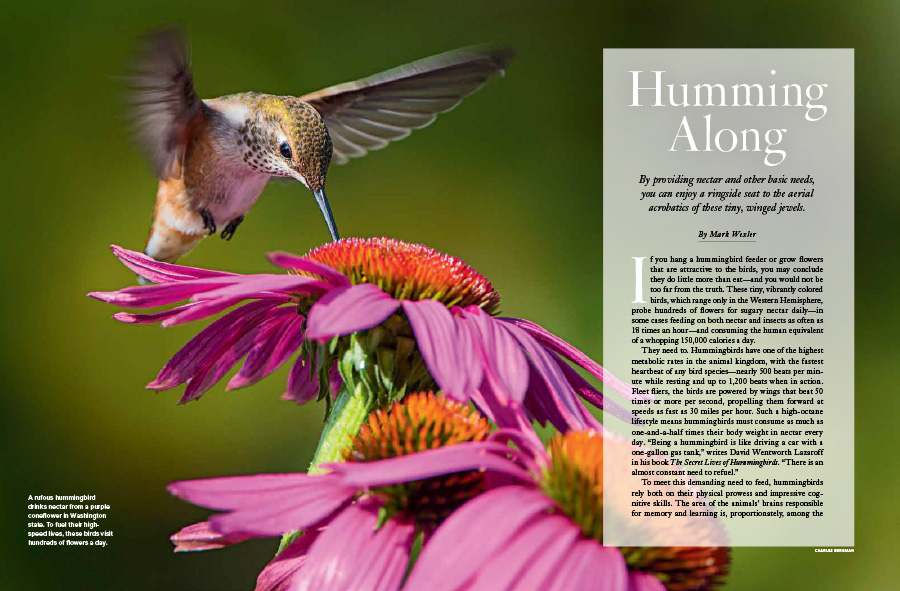 A rufous hummingbird drinks nectar from a purple coneflower in Washington state. To fuel their high-speed lives, these birds visit hundreds of flowers a day. (Photo by Charles Bergman)

IF YOU HANG A HUMMINGBIRD FEEDER or grow flowers that are attractive to the birds, you may conclude they do little more than eat—and you would not be too far from the truth. These tiny, vibrantly colored birds, which range only in the Western Hemisphere, probe hundreds of flowers for sugary nectar daily—in some cases feeding on both nectar and insects as often as 18 times an hour—and consuming the human equivalent of a whopping 150,000 calories a day.

They need to. Hummingbirds have one of the highest metabolic rates in the animal kingdom, with the fastest heartbeat of any bird species—nearly 500 beats per minute while resting and up to 1,200 beats when in action. Fleet fliers, the birds are powered by wings that beat 50 times or more per second, propelling them forward at speeds as fast as 30 miles per hour. Such a high-octane lifestyle means hummingbirds must consume as much as one-and-a-half times their body weight in nectar every day. “Being a hummingbird is like driving a car with a one-gallon gas tank,” writes David Wentworth Lazaroff in his book The Secret Lives of Hummingbirds. “There is an almost constant need to refuel.”

To meet this demanding need to feed, hummingbirds rely both on their physical prowess and impressive cognitive skills. The area of the animals’ brains responsible for memory and learning is, proportionately, among the largest in the avian kingdom, and the little birds make good use of it. “They can remember not only a specific yard they visited in the past, but also which plants in it have more nectar and even where homeowners previously placed their feeders,” says Sheri Williamson, director of the Southeastern Arizona Bird Observatory and author of the Peterson Field Guide to Hummingbirds of North America. “They might even remember you.”

Recent research suggests the birds also can recall how much time has passed since they fed at a specific flower, so they know when to return for a refill after the plant generates new nectar. In a study in the Canadian Rockies published in Current Biology, scientists from the United Kingdom and Canada found that hummingbirds “could keep track of the time since their last visit to eight different flowers.”

Unlike most insects, hummingbirds do not depend on scent to find flowers. Instead, they use their strong vision and ability to hover to locate nectar-rich plants with long tubular flowers, such as trumpet honeysuckle and columbine. “This is no accident, but rather the result of coevolution,” explains National Wildlife Federation Naturalist David Mizejewski in Attracting Birds, Butterflies, and Other Backyard Wildlife. “Tubular flowers are perfectly shaped to transmit pollen to the foreheads of these long-billed birds as they drink nectar from deep within the bloom.” Both birds and blooms, then, benefit from their relationship.

Hummers look for orange, yellow, purple and—especially—red flowers, which make up a high percentage of the plants they probe. Scientists have found that cones in the birds’ retinas act as filters, intensifying sensitivity in the red and yellow color ranges while muting other hues. “Most insects do not see well, if at all, in the red spectrum, and thus red flowers are inconspicuous to them,” Williamson says. “That reduces the hummers’ competition and helps plants get pollinated.” More than 180 North American plant species depend on hummingbirds for pollination.

For bathing, hummers, such as this Anna’s hummingbird in Arizona, are particularly attracted to moving water. At ease in the rain, a ruby-throated hummingbird (below) perches on a sugar-water feeder in Massachusetts.

How to help hummers

Of the more than 350 hummingbird species, 16 breed in the United States, with just one, the ruby-throated hummingbird, nesting regularly east of the Mississippi River. By growing hummer-friendly native plants and providing water and a handful of other resources, you can easily lure the birds to your property, helping them recharge their ultrafast metabolisms while you enjoy an opportunity to observe these winged jewels in action. It doesn’t matter whether you have a large yard or just a small deck or balcony with potted plants and a feeder. Once the birds discover your nectar sources, they’ll likely be back for more helpings. “One of the things I find really healing is to go into my garden and watch hummingbirds using the plants I’ve grown,” Williamson says. “It lifts my spirits, knowing that I’m contributing in a small way to their survival.”

Williamson recommends growing a mix of plant species that have overlapping blooming seasons so the birds have food throughout most of the year. Check with a local or state native-plant society to find out which nectar-rich flowering species are indigenous to your region and appropriate for your garden. Natives such as bee balm, cardinal flower, scarlet sage and trumpet vine deliver more nectar than hybrid flowers. And late-season flowering plants such as salvia will help species, including rufous and ruby-throated hummingbirds, that must double their weight before migrating south in autumn. 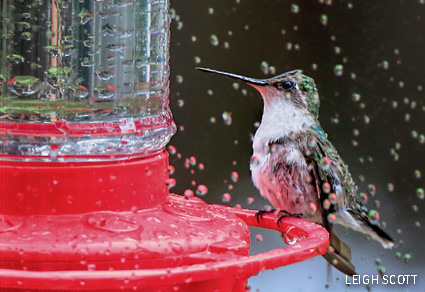 As another enticement, supplement natural food with sugar-water feeders. The best choices are feeders with bright red trim and no yellow parts (bees and wasps apparently are attracted to yellow). Position your feeders in the open but near trees or other protective cover and, ideally, more than 30 feet from your house to keep the birds from flying into windows. (According to research by Muhlenberg College ornithologist Daniel Klem Jr., you can also place feeders fewer than 3 feet from a window, which prevents the animals from flying fast into the glass.) Because species such as rufous and ruby-throated hummingbirds are highly territorial—and will fight to protect a feeder—add additional sugar-water feeders in different parts of your property for other hummers to enjoy.

Fill feeder cylinders with a solution of four parts water to one part sugar. “Be sure to use only white sugar,” Mizejewski advises. “While not particularly healthy for humans, white sugar dissolves in water in the right concentration that is a close simulation of flower nectar fed on by wildlife.” Never use honey, which promotes dangerous fungal growth, brown sugar, artificial sweeteners or red dye.

During cool weather, replace the solution every three to five days and clean the feeders thoroughly each time to prevent mold buildup. “In the heat of summer,” Williamson says, “keep feeders in the shade and change the water daily, especially when temperatures approach 90 degrees F.” Hot sugar water, she notes, ferments much faster than cool sugar water, creating a health hazard for the birds.

Hummers need more than food, of course. Native trees or tall shrubs provide them cover and places to perch. The birds look for safe perches particularly on cold nights when they go into a state of torpor—a type of deep sleep that enables them to save energy until they can begin foraging once it warms up in the morning.

During the breeding season, resist the temptation to knock down spider webs, which the birds use to hold together their cup nests and to probe for insects. Scientists say that a single hummingbird can eat hundreds of insects a day. In addition, hummers also need to bathe frequently and will be especially attracted to moving water such as bubblers, dripping fountains or misting devices.

Taking such small steps can benefit hummingbirds—and you—in a big way. “Hummers have a way of getting their little claws into you, and before you know it, you’re hooked,” Williamson says. “They have become a big part of our lives, and for that, my husband and I are grateful.”