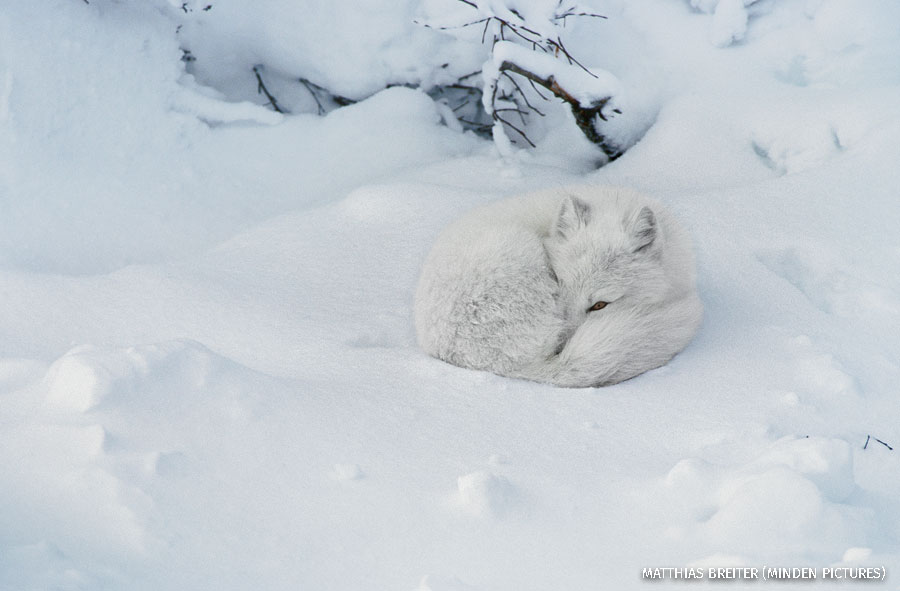 With thick fur serving as insulation, an Arctic fox in Canada curls up and tucks its nose between its paws for even more protection against the cold.

AN ARCTIC FOX pads over the snowy landscape. Her compact body and short limbs limit her exposure to cold, thick-furred paws thwart frostbite and a dense coat insulates her core. Come stormy weather, she’ll seek shelter or create her own, body curled up, nose tucked into paws, furry tail a warm embrace.

Like other wildlife species evolved in northern climates, Vulpes lagopusis beautifully adapted to winter. But will that always be true? While today’s changing climate is raising average winter temperatures in most places, it’s also bringing periods of intense cold, tumultuous winter storms and severe icy conditions. For some wildlife, these fluctuating extremes may prove too much to bear.

Confronting an icy day in Fort Thomas, Kentucky, a male northern cardinal fluffs up his feathers to trap air that will help keep him warm.

Many animals escape winter by migrating to warmer places. Geese fly south, elk plod to lower elevations, even earthworms tunnel deeper into the earth—a migration of sorts—as the temperature drops. Wildlife that stay put, meanwhile, have evolved a variety of strategies to survive. These include:

• Seeking shelter: Many creatures create or borrow cover. Black bears den, bats take to caves, lizards slip into crevices and squirrels and rabbits dig burrows. Some rodents and other animals retreat to insulated hollows in deep snow. Before taking refuge, wildlife may gorge on or hoard food.

• Sleeping it off: Wildlife that hide may also hibernate. In this sleeplike state, metabolism slows to a crawl to preserve energy. A black bear remains inactive all winter, while chipmunks may periodically wake to munch stored food or even go out for a bite.

• Dressing for it: A seal’s blubber, a cardinal’s feathers, a muskox’s layered fur all serve as insulation. On muskoxen, shaggy, outer “guard hairs” house thousands of air-filled cavities that boost their insulative value. By fluffing up their feathers, birds also trap air that helps warm them.

• Snuggling: Mammals from polar bears to foxes to mice curl up, while emperor penguins and skunks huddle with kin. Small birds shiver in a tree hole all night, often bunking together to share heat.

• Making antifreeze: Some amphibians—including wood frogs and gray treefrogs—produce compounds that, when an animal freezes, pack into some cells and organs to protect them from damage. Scientists suspect that shorebirds’ feet contain a similar substance.

Some frogs, including the gray treefrog, produce a sugary substance that helps their cells and organs survive freezing and thawing.

Such adaptations have worked well in a largely steady clime. But “climate change is taking us from a relatively predictable and stable climate to one that is not,” says biologist Camille Parmesan of the French National Centre for Scientific Research (CNRS). “That’s meant more-frequent heat waves but also more polar excursions [Arctic air pushing south] at the other extreme.”

Polar excursions occur when Arctic warming and resulting ice melt cause wobbles in the polar vortex— strong westerly winds that surround the Arctic in winter—forcing bitter polar air into parts of Canada and the United States. While polar excursions are not new, climate change seems to be fueling more and more of them. Six of the past seven winters have felt their biting chill.

Such blasts of polar air “can be very bad for species in the northern United States,” Parmesan says. She points to nonmigratory birds in Chicago, where temperatures hit 45 below zero F in 2019. “They may be used to minus 10 degrees, but not minus 40,” she says. “You go from a cold that’s good because it keeps metabolism slow enough so they don’t starve to a cold that will kill them.”

Parmesan and other scientists worry in particular about repeated weather-related hits. Carolina wrens, for example, still have not recovered from 2015’s brutal northeast winter, which knocked back their numbers by about half. “As the wren gets walloped over and over at its northern edges, we could lose populations in those regions,” says biologist Terry Root of the Stanford Woods Institute for the Environment.

Even a single extreme event can be devastating: In 2011, a wild winter storm in Alaska spawned an unprecedented wind-driven tidal surge that pushed freezing water onto land, lethally trapping more than 50 muskoxen in ice. Similar events “have catapulted fish more than a half mile onto the tundra,” says biologist Joel Berger of Colorado State University. The frequency of such surges, he adds, “is increasing throughout the Arctic.”

In a hopeful sign thousands of miles south, scientists report that one species, the green anole lizard, seems to have adapted to new winter extremes through rapid natural selection. Following a polar vortex in 2013–2014, lizards in south Texas developed a significantly higher tolerance to cold in just a single generation—an adaptation that was reflected in the animals’ genetic makeup.

But very few species are likely to adapt so quickly. “As extremes become more extreme, there will be more and more losses,” Berger predicts. Even the best-dressed wildlife ultimately may be left out in the cold.

Probing the Hidden World of Snow »
As Winters Get Warmer, Birds Are Moving North »
These Animals Don't Care That It's Freezing Outside »
Our Work: Confronting Climate Change »