Saving eagles from the lethal hazards of power line electrocution 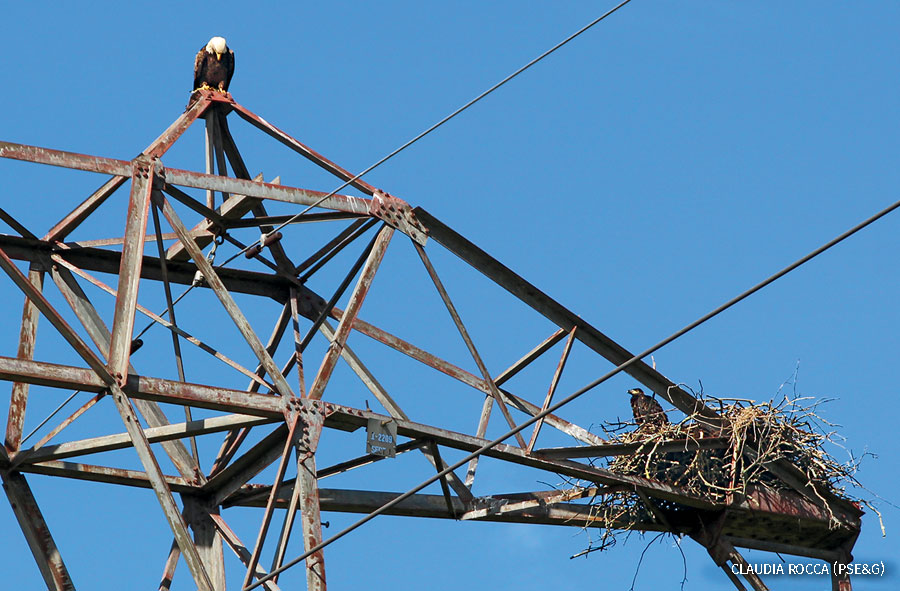 In New Jersey, bald eagles nest on a transmission tower (above) whose wires pose a collision risk. Near Cape May, electrocution killed a juvenile (below).

MORE OFTEN THAN SHE'D LIKE, Kathleen Clark reviews images of bald eagles killed by electrocution on power lines. “I’ve seen close-ups of wounds in the wing or of a singed foot with its talons completely blown off,” says Clark, supervising zoologist with the New Jersey Division of Fish and Wildlife.

Electrocution on U.S. power lines has long been a significant cause of bird mortality, killing as many as 11.6 million birds a year, according to one study. It happens when two body parts—typically a wing, foot or beak—come in contact with two wires or a wire and ground source, shooting voltage through the bird. Because of their size, raptors are particularly at risk.

From 2000 to 2015, the U.S. Fish and Wildlife Service’s National Forensics Laboratory analyzed 417 electrocuted raptors from 13 species and found that 333, or nearly 80 percent, were bald or golden eagles. 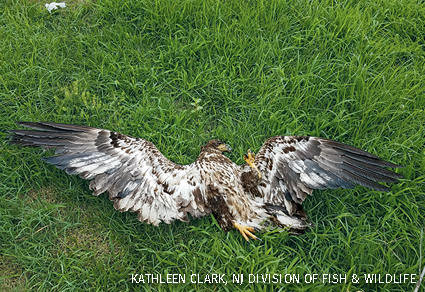 In New Jersey, electrocutions may be on the rise because bald eagle populations have been growing, thanks in part to federal and state protections. In 2020, the state recorded more than 200 nesting pairs, up from just two in 1988. Yet between 2015 and 2019, 34 bald eagles died of electrocution, making that the leading cause of raptor death and injury in the state.

Killing eagles, even accidentally, is illegal and punishable by fines under various laws, including the Migratory Bird Treaty Act. (At press time, the Trump administration was planning to roll back MBTA protections, but the fate of that proposal is uncertain.) Eagle electrocutions can also cause costly power outages, so many utility companies are working to minimize risk, says Misti Sporer, past chair of the Avian Power Line Interaction Committee.

In New Jersey, Clark’s office collected data on 10 eagles, tracking flight paths between roosting and foraging areas so a local electric company could better retrofit its power lines. Similar efforts across the region help researchers spot potential electrocution hot spots. The goal is to help raptors thrive—and to keep the lights on.

JoAnn Greco wrote about backyard owls in the October-November 2020 issue.