As snowfall decreases, many species that shelter beneath the snow can suffer from exposure. 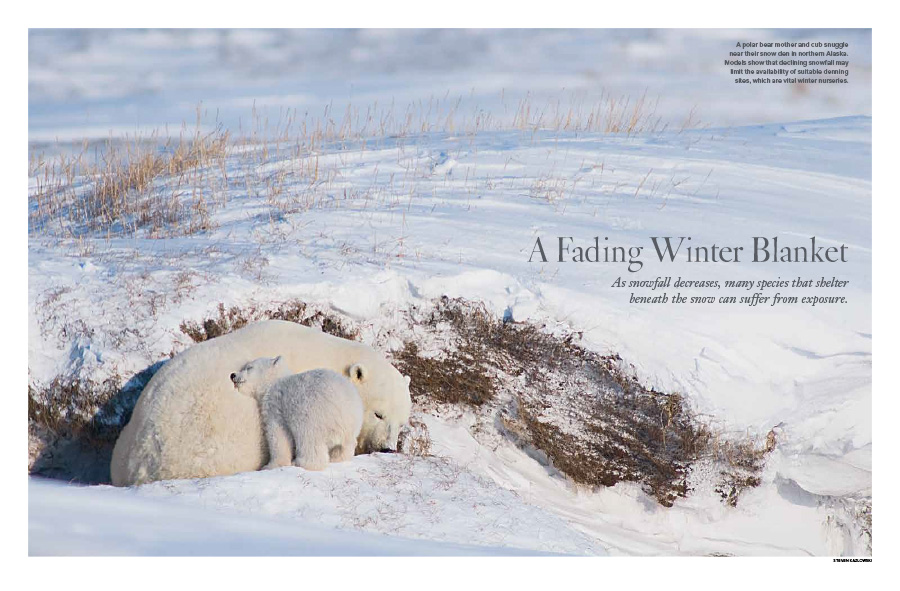 A polar bear mother and cub snuggle near their snow den in northern Alaska. Models show that declining snowfall may limit the availability of suitable denning sites, which are vital winter nurseries. (Photo by Steven Kazlowski)

EARLY ON A MARCH MORNING, just before sunrise outside Albany, New York, a group of biologists heads toward the Albany Pine Bush Preserve. The Pine Bush, as it’s locally known, is a pitch pine–scrub oak habitat vital to a wide range of species, from the endangered Karner blue butterfly to gray fox, hognose snake, weasel, coyote and red-tailed hawk. It’s also one of the largest of 20 inland pine barrens left in the world.

As dawn begins to reveal the trees, the researchers enter the Pine Bush to measure snow depth as part of the preserve’s Snowpack Monitoring Project. “That is, if we can find any snow,” says Conservation Director Neil Gifford. “There hasn’t been more than a dusting in months.” Indeed, as the team approaches a trailhead in a springlike fog, there’s little white to be seen. “On the first of March, we’d usually be on snowshoes,” says Gifford, “but now we can walk on the packed sand trails like we do in any other season.”

Gifford is interested in the growing field of snow ecology, the study of relationships among animals, plants, microbes and their snow-covered habitats. And he’s worried by what he sees. During the past 20 years, the Albany area got an average of nearly 60 inches of snow each winter, according to the National Weather Service. Last winter, it got only 49.7 inches. “Most of that,” Gifford says, “fell in early December” in a storm that dropped 22.6 inches. “That quickly melted, and all we had afterward was an inch here, two there.”

A dearth of snow is increasingly widespread across northern forests in the United States and Canada. From 1965 to 2005, the U.S. Northeast lost an average of 3.6 snow-covered days per decade, according to researchers at the University of New Hampshire—and that’s an ecological problem. A deep and long-lasting snowpack insulates the soil from frigid air temperatures, prevents plant roots from freezing and provides winter housing for many wildlife species. This world within the snow is called the subnivium, and without it, many species are literally left out in the cold.

Within the subnivium, eggs of the endangered Karner blue butterfly (above) overwinter, protected by the snow’s insulating blanket.

In the Albany Pine Bush, such exposure could spell extinction for the tiny Karner blue butterfly, listed as a U.S. endangered species in 1992. Its name derives from Karner, New York, a hamlet in the Pine Bush where the butterfly was discovered in the 1800s. Dubbed “blue snowflakes” by novelist and lepidopterist Vladimir Nabokov, these butterflies are highly dependent on the presence of wild blue lupines—the main food source for Karner caterpillars and a plant that thrives in the sandy soils of pine barrens.

Adult Karner butterflies lay their eggs on blue lupine and grass stems, either in spring or fall. Adults lay their eggs at a level that typically would be buried beneath the snow, where the eggs overwinter before hatching in spring. That snow blanket is critical to the eggs’ survival.

In a 1994 book about Karners, Cornell University lepidopterist Robert Dirig said the insects need a continuous winter snow cover of 80 to 120 days “to prevent freezing, desiccation or premature hatching of overwintering eggs.” But Field Ecologist and Entomologist Amanda Dillon, who leads volunteers monitoring snow depth around the Pine Bush, says the area “doesn’t seem to be holding a good snowpack. It snows, then melts, snows, then melts.” And that puts Karner blue butterfly eggs at risk, she says, as “they don’t have a consistent snowpack to buffer them against winter temperatures.”

While walking along a trail in the Pine Bush, Gifford pointed out the likely remains of a Karner blue egg, its shriveled casing near the ground on a lupine twig devoid of snow. “Karners usually lay their eggs less than 6 to 8 inches above ground,” says Gifford. “At that height in a ‘normal’ winter, they’d be covered with snow all season. None are this year.” Indeed, the monitoring team estimated 2019 spring and summer brood sizes at 4,801 and 7,552 butterflies respectively in the survey area. Compared to the previous year’s estimates, these numbers reflect a 36 percent decrease for the first brood and a 43 percent decrease for the second brood.

Beyond the delicate Karners, many species rely on the subnivium for winter warmth. The base of a snowbank can be 30 to 50 degrees F warmer than the above-ground temperature, making it nature’s igloo. Ruffed grouse burrow into the subnivium at night to stay warm. Wolverines use it for denning sites. And American martens “decrease their activity and spend a lot of time in the subnivium to save energy and stay warm in winter,” says Michael Joyce of the Natural Resources Research Institute at the University of Minnesota–Duluth. “They also hunt for their next meals there: voles, mice, shrews and even red squirrels. These small mammals keep warm in the subnivium, too.”

Using a uniquely designed subnivean camera trap, Norwegian researchers studied the hunting and traveling patterns of several species, including (clockwise from top left) the common shrew, tundra vole, Norway lemming and stoat, or short-tailed weasel. After a successful vole hunt in the snows of Yellowstone National Park, a weasel (below) hauls away its prey.

How do scientists know what’s happening under the snow? Peering into the subnivium has long been a challenge, but during the winter of 2013 to 2014, researchers in Norway developed a prototype camera trap—likely the first of its kind—that allowed them to observe the winter action of rodents and other small creatures for nine months, six of those under snow cover. This provided a unique peek at the animals’ winter travel, hunting and foraging. 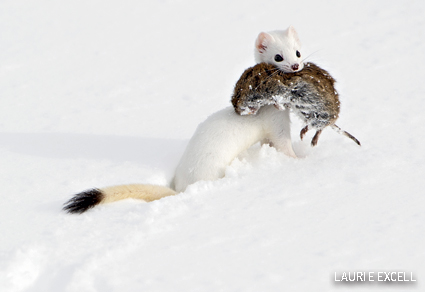 Working with camera trap maker Reconyx, they built nine plywood boxes and placed them like sections of tunnel below the snow near commonly used rodent corridors. Cameras installed in the top of the boxes pointed downward, with motion-triggered infrared images taken at high speed. Continuous observations, including data about snow cover and temperature, provided valuable information about the population dynamics of key species, particularly the insectivorous common shrew, herbivorous tundra vole and carnivorous stoat. Voles and shrews made up 80 percent of images from the cameras, which also detected great tits, insects and spiders.

Writing in Remote Sensing in Ecology and Conservation, the researchers report that, by penetrating the physical barrier of snow, camera trap technology “provides new opportunities to establish subnivean interactions between predators and prey”—a potential boon to the conservation of winter’s often unseen creatures.

In Montana’s Glacier National Park, a mountain goat mother and her kid rest on a patch of snow. Adapted to live at high elevations, mountain goats can overheat as temperatures rise. Studies show that being near snow in summer lowers the animals’ respiration rate, helping them conserve energy and stay cool.

In the far north, pregnant polar bears seek out deep snow drifts where they can dig their birthing dens. They give birth in midwinter and nurture their vulnerable young in the warm dens for about three months until the cubs can safely emerge in early spring. A stable and uninterrupted denning process is essential to the survival of polar bear cubs, according to Steven Amstrup, chief scientist at Polar Bears International. But those dens appear at risk.

Polar bears need snow drifts that are at least 6 feet deep for digging maternity dens. Formation of those drifts depends on air temperature, precipitation, wind direction and wind speed. A study presented at the American Geophysical Union in San Francisco in 2019 used complex modeling to study these elements and found that, if current warming trends continue, suitable denning habitat in northern Alaska will shrink by more than 90 percent by the year 2100.

For many cold-adapted species, snow is just as important in summer as in winter. That’s especially true for mountain goats, native to North America’s high-elevation peaks. Living above the tree line, there’s little opportunity to seek out shade, and panting to keep cool expends a lot of metabolic energy. To prevent overheating in warming temperatures, mountain goats seek out patches of snow as a form of air conditioning.

To understand the importance of this cooling source, a team of researchers studied the respiration, or breaths per minute, of 44 individual mountain goats in Montana’s Glacier National Park. Publishing their findings in 2019 in PLOS One, they report that when mountain goats were on snow, their respiration rate dropped by an average of 15 percent, suggesting that “remnant snow plays an important role in mediating effects of air temperature.”

Yet the presence of snow and ice is dwindling in the park, which has lost more than 85 percent of its glaciers during the past 100 years. Says park biologist and study co-author Mark Biel, “How [mountain goats] and other species adapt as climate change continues is critical to understanding how long they will persist on the landscape.”

Whether in Montana or Norway or upstate New York, the future for northern animals and plants looks brightest—and safest—in a white winter. “Remember that the Earth is a gift we must pass on, just as it came to us,” writes Robin Wall Kimmerer in Braiding Sweetgrass. When we forget, she believes, it will lead to mourning “the passing of polar bears … and the memory of snow.”

A Winter Haven Full of Life

In Albany’s Pine Bush Preserve, pitch pine, scrub oak and prairie grasses emerge from a wintry layer of snow that blankets the undulating sands beneath. Common winter residents include the red-tailed hawk (A), short-tailed weasel (B), white-tailed deer (C), eastern coyote (D), common raven (E) and gray fox (F), shown here leaping to snatch a vole (G) that it hears in a tunnel beneath the snow. Within the subnivium, eggs (H) of the endangered Karner blue butterfly overwinter, protected by the snow’s insulating blanket, and a weasel chases a vole through a snow tunnel. Deeper still, a hognose snake (I), eastern chipmunks (J, K) and a woodland jumping mouse (L) hibernate in sand burrows, where rodents also cache food (M).