For species declining in the wild, zoos and aquariums provide critical refuge—and often offer the only hope for recovery. 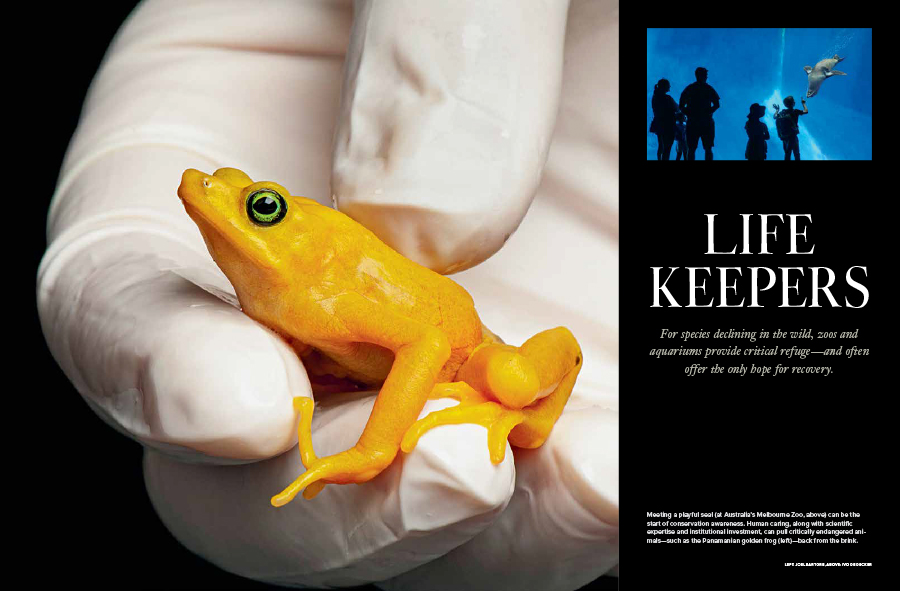 Human caring, along with scientific expertise and institutional investment, can pull critically endangered animals—such as the Panamanian golden frog (above left)—back from the brink. Meeting a playful seal (at Australia’s Melbourne Zoo, below) can be the start of conservation awareness. (Photo above left by Joel Sartore)

THE PANAMANIAN GOLDEN FROG is the official national animal of its Central American homeland. On Golden Frog Day each August, school children dress up as the bright yellow amphibians and parade through the streets. Hotels, restaurants and shops display captive frogs as symbols of prosperity and good fortune. Or they did, before over-collecting, habitat loss and epidemic disease drove the beloved icon to the edge of extinction. 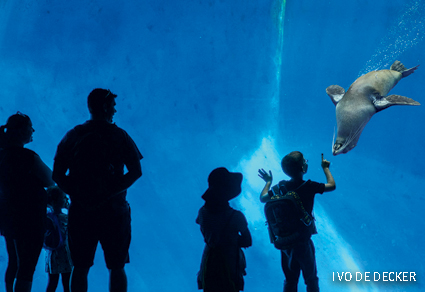 “The handwriting was on the wall,” says Kevin Barrett, reptile and amphibian collection and conservation manager for the Maryland Zoo in Baltimore. The deadly chytrid fungus that was already devastating amphibian numbers worldwide was sweeping ever closer to golden frog territory, but “thankfully, we were proactive,” he recalls. In 1999, the Republic of Panama allowed scientists to collect golden frogs from three distinct populations and move them to the United States for protection in human care. No frogs have been found in their native wild habitat in more than a decade.

By the terms of the federal permits allowing the endangered animals to be imported, Maryland Zoo has been legally responsible for all Panamanian golden frogs in North America since 2000. Today, Barrett says, some 60 institutions accredited by the Association of Zoos and Aquariums (AZA) share the work of looking after about 1,200 frogs. His organization’s leadership role is a “very big source of pride,” Barrett says, but it’s also an expensive, long-term commitment. Project Golden Frog costs Maryland Zoo alone upwards of $150,000 a year—including, the veteran frog-keeper notes, tens of thousands of crickets.

A raised platform at Colorado’s Cheyenne Mountain Zoo (above) brings visitors eye to eye with reticulated giraffes. The tall ones are favorites at many zoos, along with big cats, great apes, bears and elephants. But often, zoos’ most endangered residents are tended behind the scenes, where the public rarely sees the care invested in creatures such as the Guam kingfisher (at the Houston Zoo, below), a species that is now extinct in the wild.

There are now 241 AZA-accredited zoos and aquariums worldwide, with 218 of them in the United States. To be accredited, organizations must meet evolving, science-based animal welfare standards and make major investments in conservation research and action, both in support of their own residents and on behalf of wild populations. AZA members “are collectively providing more than $200 million per year for wildlife conservation and species recovery,” according to noted biologist and veteran zoo leader Don Moore, making the group, he says, “one of the largest conservation organizations in the world.”

Given such commitments, conservation-focused zoos and aquariums are challenged to choose which species to shelter from the storm of an accelerating global extinction crisis. “You want to help all of them,” says Tim Snyder, curator of birds for the Chicago Zoological Society’s Brookfield Zoo, “but you have to assess how your facilities, staff experience and institutional scope can meet the needs of each species.” Together, AZA members house some 800,000 animals representing 6,000 species. A thousand of those are classified as threatened or endangered—or even extinct in the wild—according to AZA figures. 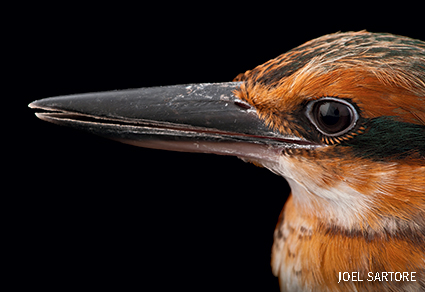 Snyder has been involved with one such extreme case for much of his career: the Guam kingfisher. Brown tree snakes accidentally introduced to Guam by military transport activities after World War II eradicated more than half of the island’s native birds within decades. In the mid-1980s, 29 surviving kingfishers were taken into captivity as a last-ditch effort to stave off extinction. Thirty years ago, when Snyder met the birds for the first time as a new keeper at the San Antonio Zoo, he says he was “terrified of even looking at them wrong,” their numbers were so few.

Now he manages their largest single population for the Chicago Zoological Society, but the total species count is still alarmingly small: just 138 birds before the start of the 2021 breeding season. A major factor influencing the Society’s commitment to the Guam kingfisher was existing experience with grey-headed kingfishers, widespread and populous African birds.

“We often work with common species to develop husbandry and management skills,” Snyder explains, and lessons learned from the grey-headed kingfishers helped prepare Brookfield Zoo staff to make what he calls “a significant contribution” to establishing a stable population of the much-rarer birds. “When you are hand-rearing a Guam kingfisher chick, you are never quite able to put the thought out of your head that you are responsible for the next generation of such a critically endangered species,” Snyder says. “It is incredibly rewarding, but at the same time the responsibility can be overwhelming.”

The kingfishers themselves seem undaunted by their precarious status. “They have an attitude,” Snyder laughs. “They give you this look, and you can almost see what they’re thinking: ‘If you were any smaller you’d be in my beak and I’d be swallowing you down.’” That feistiness will likely serve the birds well when they’re reintroduced to the wild, a process that may begin as early as next year. Brown tree snakes still put Guam itself off-limits, but nearby Pacific islands offer promise as territory for a kingfisher homecoming. “There is a lot of work being done on some of the smaller Micronesian islands to assess habitat, food sources, nesting opportunities and potential threats,” Snyder says—work that must be completed before releases can take place.

Governor Laffan’s fern (above) was missing from the wild for more than a century before rare-plant experts at the Henry Doorly Zoo and Aquarium in Omaha, Nebraska, successfully bred new specimens and delivered them back to their Bermuda home. Adult golden lion tamarins—such as this one (below) at the Lincoln Children’s Zoo in Nebraska—weigh less than 25 ounces and nearly vanished from Brazil’s Atlantic coastal rainforests 50 years ago.

Restoring the wild, from the ground up

That kind of whole-habitat thinking stands at the heart of another high-stakes zoo effort: the rare-plants program at the Henry Doorly Zoo and Aquarium in Omaha, Nebraska. Though it may seem odd for a zoo to be in the plant conservation business, botanist Margaret From and her team operate on the principle that when a plant disappears, a whole roster of other species—from soil microorganisms to insects and even vertebrates—will struggle to survive without the food, shelter and other resources provided by their familiar green ecosystem partners.

The Omaha zoo plant team is not afraid of a challenge. In 2002, the Bermuda Department of Environment and Natural Resources sent them spores of Governor Laffan’s fern, which hadn’t been found growing in the wild on the island in nearly a century. It took seven years for the lab to successfully propagate specimens of the fern and deliver healthy young plants to their native land. “They’re very fragile,” From says, “so we have to hand-carry them.” Further growing success followed, with more plants (gently) delivered through 2019. At the same time, the lab has undertaken equally ambitious work to restore native orchids in Madagascar and to develop a seed-preservation program for endangered plants in South Africa.

Bermuda’s Department of Environment launched its reintroduction program in 2014, planting zoo-raised juvenile ferns in the species’ historic range. Those early efforts were not very successful, Bermuda biodiversity officer Alison Copeland reports, but more-recent plantings have done better. Several plants produced spores in the wild for the first time in 2020, and in January 2021, more than two dozen Governor Laffan’s ferns were established at four different sites. Without the collaboration between the Department of Environment and the Omaha zoo, island conservationists say, the rare fern would likely have been lost forever. 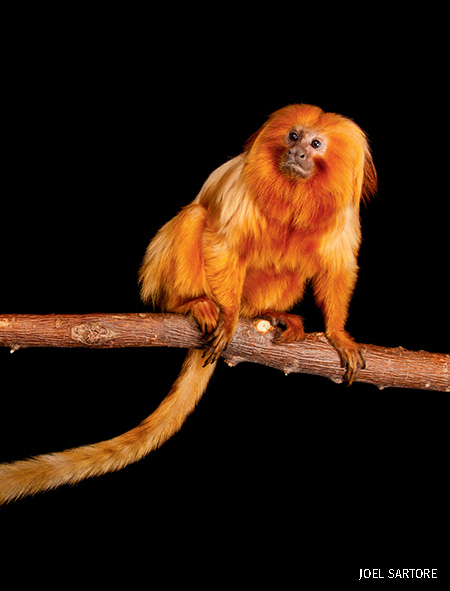 Reintroductions don’t always follow a straight path to stable recovery—and few know that better than conservationists working with Brazil’s golden lion tamarin. By the early 1970s, destruction of its native coastal forests and capture for local zoos and the pet trade had reduced the wild population of this charismatic little primate to fewer than 400 individuals. U.S. zoos launched a major species-rescue effort that included reintroduction of zoo-borns into surviving Brazilian forest habitats. By 2014, numbers in the wild had rebounded to some 3,700 tamarins—a widely hailed conservation victory.

Then disaster struck. Starting in 2016, Brazil experienced its most severe yellow fever outbreak in decades, with waves of disease continuing through 2018 and claiming 745 human lives, according to World Health Organization figures. Nonhuman primates are susceptible to the mosquito-transmitted infection too, and nearly a third of the recently restored golden lion tamarin population perished in the outbreak. Currently, only about 2,500 wild tamarins are thought to survive, around a third of them descendants of zoo-raised individuals.

In the shallows of Abrams Creek, Tennessee, biologists (above) “snorkel survey” for an endangered catfish called the Smoky madtom. Captive breeding efforts are helping restore wild populations, now nearly vanished from their home streams. Bright colors mark these endangered Barrens topminnows (below) as mature males. Aquarium scientists in the fish’s native Tennessee—along with colleagues in Connecticut, Illinois and Iowa—are collaborating to ensure the species’ survival.

A leg up on recovery (or a few fins)

For some species, the odds of survival seem stacked against them. On the Barrens Plateau in middle Tennessee, for example, the Barrens topminnow faces rough odds. It depends on spring-fed pools and streams lined with freshwater vegetation—a habitat that’s always at risk from drought and that has been disrupted by agriculture and other human development in the region. People have also introduced fast-breeding western mosquitofish into the topminnows’ home waters. Along with consuming masses of insects, the invaders feast on larval topminnows with predictably disastrous consequences. In October 2019, the U.S. Fish and Wildlife Service listed the Barrens topminnow as endangered under the Endangered Species Act. 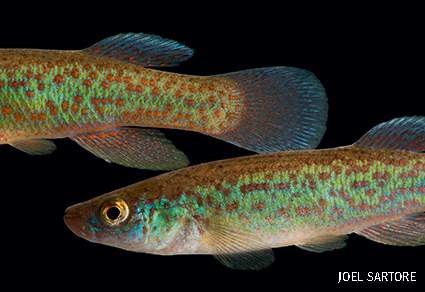 Tennessee has classified the little fish as endangered at the state level for much longer, and the Tennessee Aquarium in Chattanooga is working hard to keep the topminnow swimming—joined by colleagues at the Shedd Aquarium in Chicago, Connecticut’s Maritime Aquarium in Norwalk and the National Mississippi River Museum and Aquarium in Dubuque, Iowa. Distant keepers raise topminnows until they’re big enough to avoid becoming snacks for voracious mosquitofish, then the youngsters are shipped to Chattanooga, where they’re carried by Tennessee Aquarium Curator of Fishes Matt Hamilton and his staff to new homes on their namesake plateau. Like all species-recovery efforts, it’s a job no single organization can do alone.

Accredited research zoos and aquariums “can help rebuild a population so that the immediate threat is held at bay,” Snyder says. “But it then takes field biologists and governments and educational institutions and local citizens and so many more to make it safe for these species to be returned to their homes. It takes more than a village to save a species. It takes a movement.”

Alliance to save species

In 2018, the National Wildlife Federation and Association of Zoos and Aquariums signed an agreement to collaborate on efforts to save U.S. fish and wildlife species, protect habitats and educate people about conservation. More than 70 AZA members feature NWF Certified Wildlife Habitats, including Maryland’s National Aquarium.

Writer Lynne Warren is based in Maryland.

Hope Rising »
Lifelines of the Planet »
Our Work: Success Stories »