Across the world’s oceans, a rising tide of human-caused noise is disrupting the lives of marine animals, from whales to fish and invertebrates. 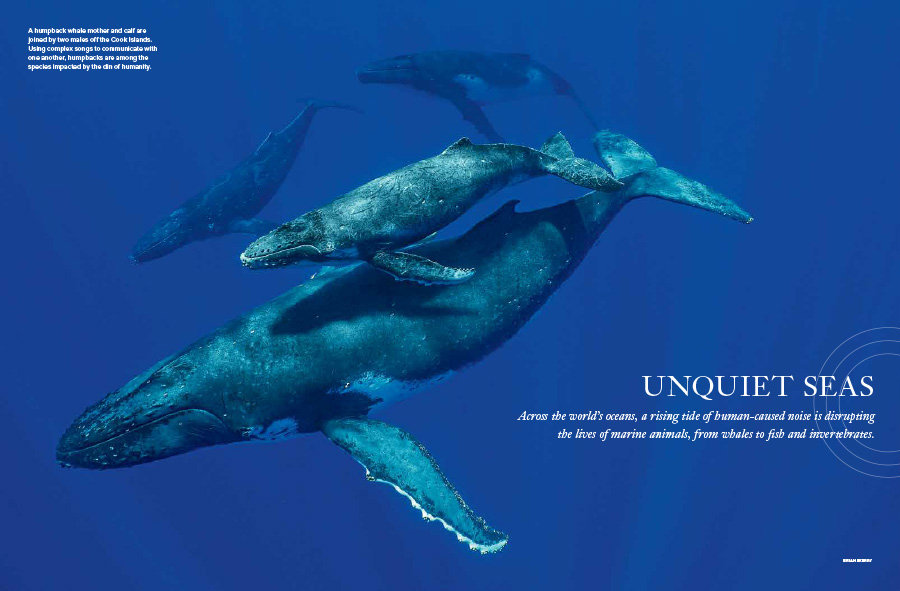 A humpback whale mother and calf are joined by two males off the Cook Islands. Using complex songs to communicate with one another, humpbacks are among the species impacted by the din of humanity. (Photo by Brian Skerry)

JACQUES COUSTEAU’S 1956 FILM “The Silent World” introduced the ocean’s wonders to millions of viewers. But Cousteau got one thing wrong. Far from silent, the ocean is defined by sound—from rumbling earthquakes to blue whales calling across ocean basins and choruses of grunting codfish.

Light and chemical cues key to terrestrial animals are sharply reduced in the ocean, so evolution has shaped its inhabitants to depend on hearing for finding food and mates, avoiding predators, communicating and other critical functions. But since the Industrial Revolution, the ocean soundscape has been increasingly dominated by a human-created, or anthropogenic, cacophony.

All that noise has profound consequences. Anthropogenic sounds can make animals stop feeding or abandon important habitat. Communication within a species is silenced or “masked” by noise. It can also cause physiological harm such as deafness and even lead to death by hemorrhaging or stranding. Among 538 scientific studies on underwater noise, about 90 percent found negative effects on marine mammals, and more than 80 percent found adverse impacts on fish and invertebrates.

Of all anthropogenic sources, prospecting for undersea oil and gas creates “the loudest sound we put into the ocean with any regularity,” says Douglas Nowacek, professor of marine conservation technology at Duke University. Towed by slow-moving ships crawling across the ocean like lawn mowers, arrays of seismic airguns blast pressurized air into the ocean every few seconds, day and night, often for months on end. These pulses penetrate miles into the seafloor, then bounce back, yielding a tiny piece in a vast jigsaw puzzle of buried hydrocarbons. Instruments at Woods Hole Oceanographic Institute on Cape Cod routinely pick up seismic blasting off Brazil and Iceland. Closer by, Nowacek suggests, it’s like standing near a slowed-down jackhammer pounding round the clock. In Arctic Canada’s Baffin Bay, scientists suspect nearby seismic testing in 2008 is what caused spiral-tusked narwhals to delay their southward migration until it was too late: 1,000 died, trapped in ice.

It’s not just ocean giants that are harmed. So are many species of marine turtles, fish and invertebrates, plus countless zooplankton that are a food source for everything from whales to shrimp. “It turns out plankton suffer high mortality in the presence of seismic airguns,” says biologist Lindy Weilgart of Canada’s Dalhousie University.

Last year, federal permits that would have allowed vast new offshore seismic blasting off the Atlantic coast expired in a wave of opposition. But elsewhere, there are new leases—and blasting continues in existing ones, including in the Gulf of Mexico, where scientists are gravely concerned about the endemic Rice’s whale, listed as a unique species in January 2021. Numbering about 50 individuals, it is one of the most endangered whales on Earth.

In the Gulf, “there are extremely vulnerable species that in some cases suffered 20 percent population loss from the Deepwater Horizon spill, yet now continue to be barraged by airgun noise,” says Michael Jasny, director of the Natural Resources Defense Council’s marine mammal program. Bottlenose dolphins “are in terrible shape. Sperm whales, whose foraging is significantly impacted by seismic testing, are weirdly undersized. We’re putting in harm’s way species already harmed to their core.”

Drowned Out by Noise | Human-caused noise challenges marine animals with both its amplitude (loudness) and frequency (pitch). Here a blue whale attempting to communicate with low-frequency calls to another whale encounters interference from a variety of anthropogenic sources—shown in order of the most-commonly encountered (shipping) to least. As a low-frequency sound that is widely distributed across the world’s oceans—and that travels effectively over long distances—shipping noise is the most likely of all human-caused sounds to interfere with whale communication.

Ocean noise began to cause significant wildlife mortality at least as early as the 1960s, when mass strandings of deep-diving whales increased markedly. That was just a few years after a powerful new type of naval sonar was developed to detect enemy submarines, and navies were eagerly testing its capabilities. By the 1980s, findings began to converge from different stranding sites. Autopsies revealed signs of decompression sickness—similar to the “bends” that afflicts divers who surface too rapidly; many whales had telltale bleeding around their brains. Victims were primarily beaked whales—little-known species such as the northern bottlenose and Cuvier’s beaked whale—that may dive down to 10,000 feet and stay submerged for more than an hour hunting squid and fish. Almost all the strandings occurred within days of nearby naval exercises that used sonar.

Several newer studies have strengthened the association between sonar and dozens of strandings of beaked whales—a link the U.S. Navy has rarely acknowledged through rounds of permitting proposals and years of court wrangles. While few actually die in sonar’s wake, beaked whales and other marine mammals often start swimming rapidly away, as though from a dangerous predator, or suddenly begin premature, precipitous dives, which can cause decompression sickness or stranding.

“It sounds like a very loud fire alarm that reverberates through the ocean, often repeating over many hours,” says acoustic ecologist Anne Simonis, lead author of a new study of several beaked whale strandings since 2007 near the Mariana Archipelago—the United States’ main military training area in the western Pacific. The study, funded by the National Oceanic and Atmospheric Administration (NOAA) and the U.S. Navy, concluded that “the likelihood that the strandings were coincidental is less than 1 percent,” according to Simonis. Since documenting elusive whales at great depths is extremely difficult, she says, “the number of animals showing up dead on the beaches may only be a fraction of the animals that are dying at sea.” 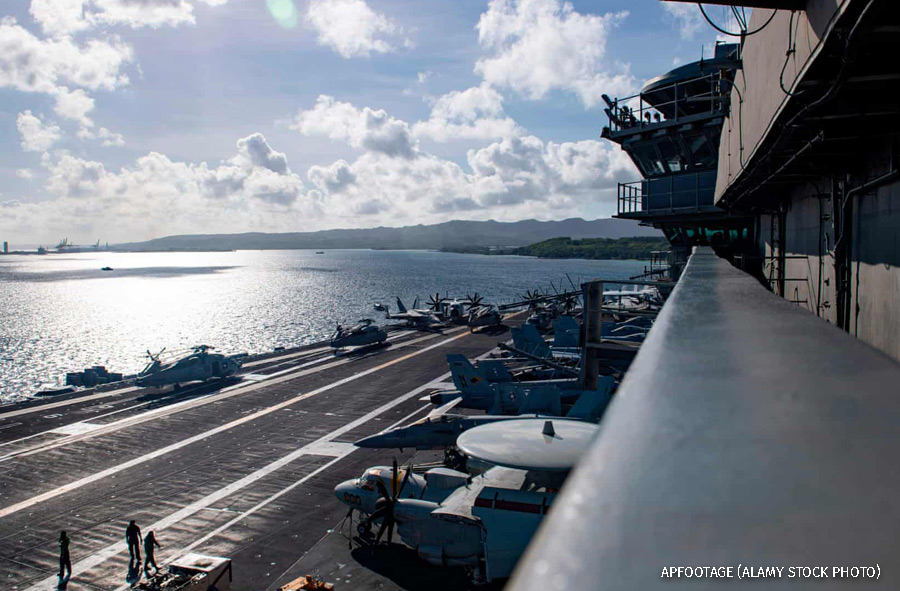 A naval ship (above) departs Guam, a major U.S. military training site. Since 2007, many strandings of beaked whales, including this Cuvier’s beaked whale (below) on Guam, have been linked to naval exercises using sonar.

Yet the most-pervasive anthropogenic ocean noise is the most chronic: sound generated by some 60,000 commercial ships plying the seas at any time, along with countless other watercraft. Shipping noise is “always there,” says scientist Brandon Southall, former director of NOAA’s Ocean Acoustics program. “It doesn’t have to be lethal to be problematic.” 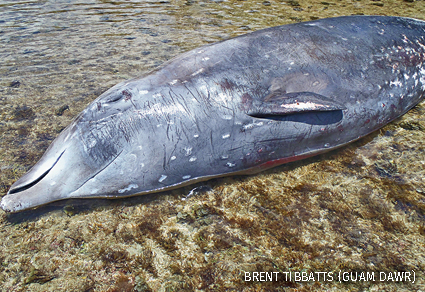 Underwater noise from shipping has doubled every decade since 1950. Both the International Maritime Organization and the International Whaling Commission want member nations to voluntarily reduce their ship noise this decade. But a recent study found that half of the underwater din comes from just 15 percent of vessels, mostly cargo and container ships, and mostly from shipboard machinery and cavitation—generated when bubbles on propellers form and collapse explosively. While repairs and retrofits can reduce these problems, they may be costly. The study’s authors also found that when noisy ships simply slow down slightly, underwater noise is significantly reduced.

“The faster the propellers spin, the more cavitation is produced, the more underwater sound is generated,” explains Carrie Brown, director of environmental programs for the Vancouver Fraser Port Authority. Most ships calling at Vancouver, Canada’s largest port, transit critical orca habitat. Since the port authority started asking ships to slow down in 2017 for its ECHO (Enhancing Cetacean Habitat and Observation) Program, participation has steadily increased—to 91 percent in 2020. A computer model published in 2019 predicted that such slowdowns would substantially decrease the whales’ “potential lost foraging time.”

The port authority also discounts harbor dues for ships that implement sound-reducing technologies—making Canada the first country anywhere to incentivize quieter ships. In April 2021, inspired by Vancouver’s success, the Washington state legislature approved funding for Quiet Sound, its own new plan to quiet Puget Sound, the first of its kind in the United States.

On the other hand, what makes environmental sense in the long run can have high short-term costs: The noise output of operating wind farms is low, but their construction involves pile driving that generates underwater sound loud enough to potentially harm the hearing of mammals, says Jim Miller, chair of the Department of Ocean Engineering at the University of Rhode Island. But his team also found that when a construction site was encircled by a perforated “curtain” filled with compressed air bubbles, noise levels dropped dramatically, confirming findings that already guide construction in some European countries where wind farming is more developed. 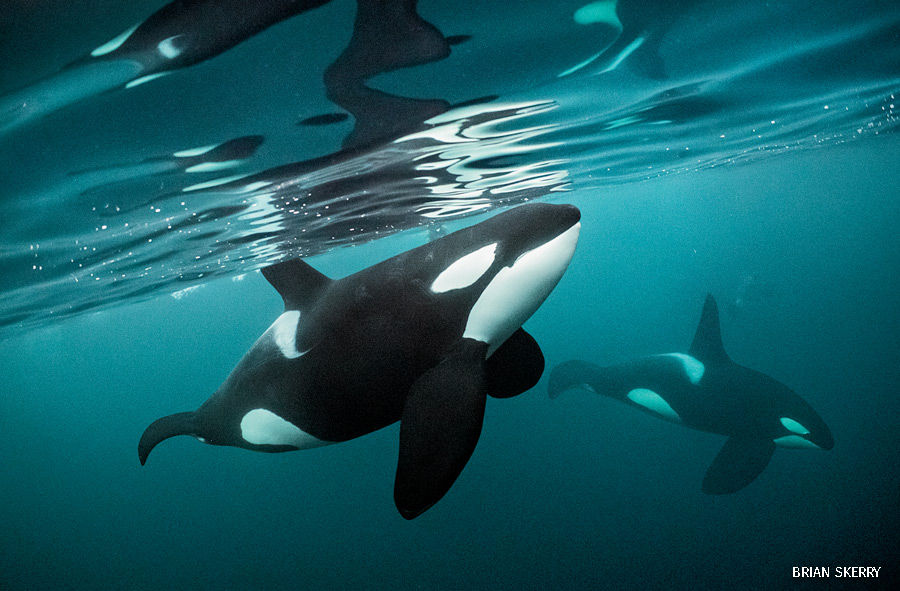 Even more whales are impacted by shipping noise, including killer whales (above) that rely on sound to find food, but ship slowdowns may improve hunting success.

If there is good news about ocean noise these days, it is usually thanks to technology. Fixes exist—even if they are adopted at a snail’s pace. Information flows in as never before. “We have new ways to measure behavior with drones, new ways to measure behavioral effects with tissue sampling, new ways of measuring group structure of animals in faraway places through satellite imagery,” says Southall. “It’s not like DDT or greenhouse gases. It’s more tractable.” Yet he and other experts agree that the problem is joined to the most intractable problem of all: global climate change. Acidifying oceans absorb less sound. And in the warming Arctic, instead of sound-muffling ice blanketing the sea as it used to, open water now amplifies sound while longer ice-free seasons draw rapid—and noisy—industrialization.

Bioacoustics expert Christopher Clark clearly recalls his amazement when he first heard the Arctic’s natural underwater symphony. Through recorders beneath the ice, belugas chirped, bowhead whales moaned and bearded seals roared like something out of science fiction. That was many decades ago. These days, Clark is more likely to describe the “acoustic bleaching” of the world’s oceans and the “living hell” human noise subjects their inhabitants to. And yet, “if you look at a map of the world showing the lights of humanity and go to the places with no lights,” he says, “you can still listen to an animal 1,000 miles away. You can still hear life making a living in places where it’s the quietest it has ever been.” It’s a hopeful sound—as magical, to Clark, as it is rare.

Leslie Allen is a science writer based in Washington, D.C.

Room to Roam »
Birds Coping with Chronic Clamor »
Blog: Is It Too Late For A Mysterious, Newly Discovered Whale? »