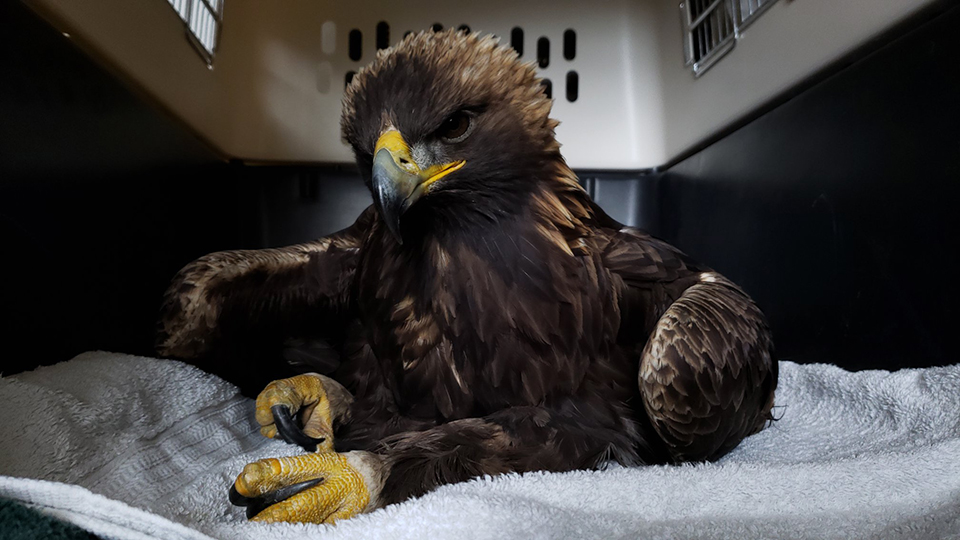 For many years, the only options for hunters and anglers were ammunition and tackle that contained lead, which is toxic to all living organisms. The result is an untold amount of lead spread across our landscapes and waterways, and concentrated at popular hunting and fishing spots.

Hunters and anglers have seen firsthand the impacts lead has had on the environment. Lead pellets and bullet fragments have been found in the meat hunters bring home, and in the field, hunters have observed lethargy, weakness, and muscle wasting in game birds. Scavenger species, like eagles, feed on gut piles from big game harvests which may contain hundreds of tiny lead fragments, resulting in several debilitating problems and even death.

Sporting Lead-Free is a new, Wyoming based initiative to reduce inadvertent lead consumption by wildlife and people. Our goal is to help inform sporting communities about the benefits of voluntarily using lead-free ammunition in the field to support the best choices for themselves, their families, and the environment. Our strategy is a three-pronged approach: community, access, and awareness. Building a community of hunters and anglers that use and promote lead-free ammo and tackle with their friends and family will be a key component to the success of the initiative. By partnering with local and national sporting goods retailers, we hope to increase access, visibility, and education of lead-free ammunition and tackle. Lastly, awareness includes education and as a part of that, we host shooting demonstrations to give hunters first-hand experience using copper vs. lead bullets. For the purposes of this article, we’ll be focusing on the awareness arm. 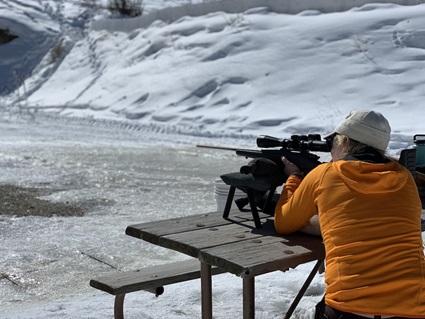 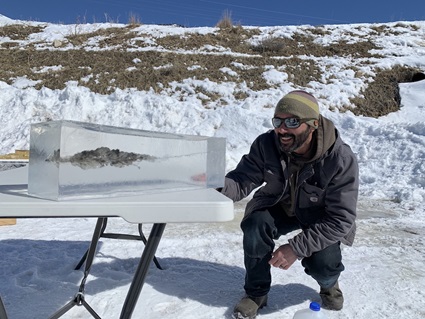 During these shooting demonstrations, the team discusses the benefits of using lead-free (copper) ammunition and debunks several misconceptions. There are three main arguments against using copper alternatives: availability, affordability, and effectiveness.

Copper bullets first hit the shelves in the 1980’s. At the time, only one manufacturer, Barnes, had a copper bullet option. Over the years, most large ammunition manufacturers have lead-free options for popular calibers and gauges. Here is a comprehensive list of manufacturers and their non-lead products.

Currently, any bullet, lead or copper, is close to impossible to find. Once supply returns, being informed on the best choice for yourself, your families, and the environment is important.

Another argument used against switching to lead-free bullets is that they cost more. With more companies than ever before manufacturing copper bullets (the current ammunition shortage aside), the cost difference is minimal. If you’re using high quality grade lead core bullets, you’ll find that the cost is remarkably close, and sometimes more than lead-free options. For example, a box of 20 Federal Premium Trophy Bonded Tip 7mm-08 Rem rounds costs $53.99 ($2.70/round). It’s copper counterpart Trophy Copper 7mm-08 Rem costs $54.99 ($2.75/round) for a box of 20.

Many hunters will say that lead outperforms copper. This might have been true 30 years ago when copper was first introduced to the market, but with advances in technology copper performs just as well, if not better than lead.

During a recent shooting demo, Sporting Lead-Free aimed to debunk this argument. We tested the differences in ballistic coefficient, penetration, and fragmentation and weight retention between a Remington Core-Lokt .270 REM 130 grain bullet and a Barnes TTSX .270 REM 130 grain bullet. The ballistics and performance comparisons can get a bit in the weeds, so I’ll provide some basic definitions and concepts as we go through each topic.

The ballistic coefficient (BC) of a bullet is a measure of its ability to overcome air resistance in flight. Essentially, a bullet’s speed. For hunting, a higher BC has several benefits. First, a higher BC means the bullet will have a flatter flight, typically resulting in less critical effects from erroneous distance estimations. This could mean the difference between a clean kill and a wounded animal. Secondly, a bullet with a higher BC reaches the target faster and with more energy than one with a lower BC. Since the higher BC bullet reaches the target faster, it is also less affected by crosswinds. Finally, force = mass x acceleration. If your speed is faster, so is your force (i.e., knock-down power).

Remington reports that the ballistic coefficient of the Core-Lokt .270 REM 130gr bullet is 0.261. The ballistic coefficient of the Barnes TTSX .270 REM 130gr bullet is 0.392. On paper, copper takes the cake. When tested in the field, the lead bullet was captured by just one water jug after passing through the ballistics gel, whereas the copper bullet went through three water jugs before being captured. This indicates that the copper bullet had much more energy upon impact and through the gel than its lead counterpart.

Penetration depth is extremely important in an ethical and efficient kill. In hunting, penetration refers to the wound channel. A longer wound channel means more damage to vital organs and greater blood loss. When comparing lead vs copper, both had similar penetration. The differences were in the expansion and weight retention.

Most modern bullets used for hunting are designed to expand (increase in diameter) on impact to limit over-penetration and inflict maximum wound damage. Though equivalent caliber copper and lead bullets expand to about the same diameter size, there are two notable differences. First, fragmentation and weight retention. Lead bullets can lose up to 40% of their mass in fragments upon impact, sending tiny metal fragments up to 18” from your bullet’s core wound channel. Without weight retention, the bullet may lack the necessary penetration to reach the vitals. For scavengers, like eagles, that feed on your gut pile, the tiny fragments are too small to be noticed and avoided. These fragments may also end up in our burger meat and even roasts that we bring home to family and friends.

On the other hand, copper bullets retain 95-100% of their weight. This means more weight and kinetic energy driving it through the animal on impact. When copper bullets expand, they do so in large pedals, resulting in a nice mushroom-like shape to the expanded bullet.

Speaking of kinetic energy, let’s talk about the second notable difference with penetration of copper vs. lead bullets: hydrostatic shock.

Bear with me, we’re almost through the heavy definitions. Hydrostatic shock refers to kinetic energy transferred as shock waves through flesh. Once a bullet penetrates the target, these shock waves travel through flesh to distant nerve centers, like the spine, and disrupt their ability to emit electrical impulses, which in turn results in loss of consciousness. Think about an MMA fighter being punched and immediately losing consciousness, this is hydrostatic shock. Hydrostatic shock paired with the large wound channel created by the expanding bullet helps produce ethical killing. The photo below shows two ballistics gels, one shot with copper (top) and the other with lead (bottom). You can see that the wound channel expansion, or hydrostatic shock waves, are larger with the copper bullet than the lead bullet. 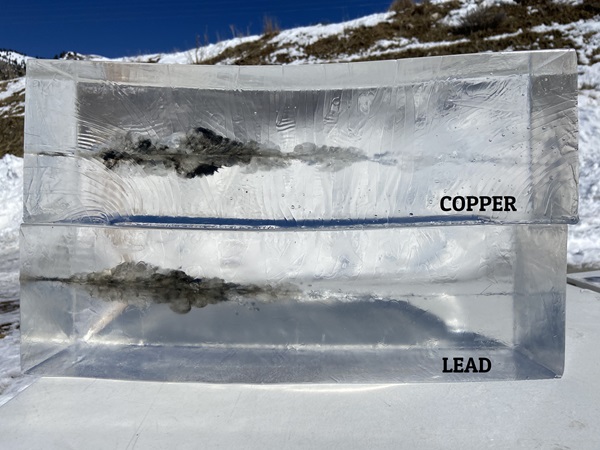 One last note on effectiveness and hydrostatic shock. You may also observe that the shock waves in the copper bullet start farther into the ballistics gel than those of the lead bullet. This needs to be examined further, but one might surmise that with the hydrostatic shock waves starting further into the wound channel you may have less bloodshot meat as the shock starts once it enters the vital organ cavity rather than immediately upon impact in the flesh.

To summarize the findings in these shooting demos:

1. Availability is currently a struggle for copper and lead ammunition alike. The good news is once availability returns, you know that most ammunition manufacturers do produce lead-free options in popular calibers.

2. Affordability is essentially a moot point, as the difference between high end lead bullets and copper bullets is a matter of a few dollars. And you might make up these dollars by lack of meat loss in using copper bullets.

3.Effectiveness of copper bullets matches, and in some cases, exceeds the performance of lead bullets.

With these myths debunked, and the negative impacts of lead on wildlife and human health known, we encourage you to switch to using lead-free in the field. Lead still has its place (for now) in shooting sports at the range and in competition shooting, but we believe it has no place in the field.

Sporting Lead-Free is just one organization among many working to bring awareness to this issue. National Wildlife Federation’s Lead-Free Landscapes campaign also works to promote the voluntary switch to lead-free to reduce the negative impacts of lead on wildlife. By building a diverse community of organizations and individuals, we can ensure clean, lead-free landscapes that support healthy wildlife populations. 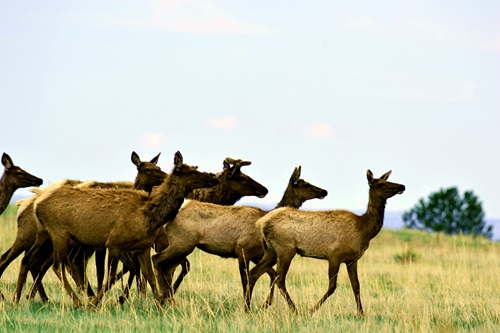 Learn more about Sporting Lead-Free and get involved by visiting www.sportingleadfree.org.