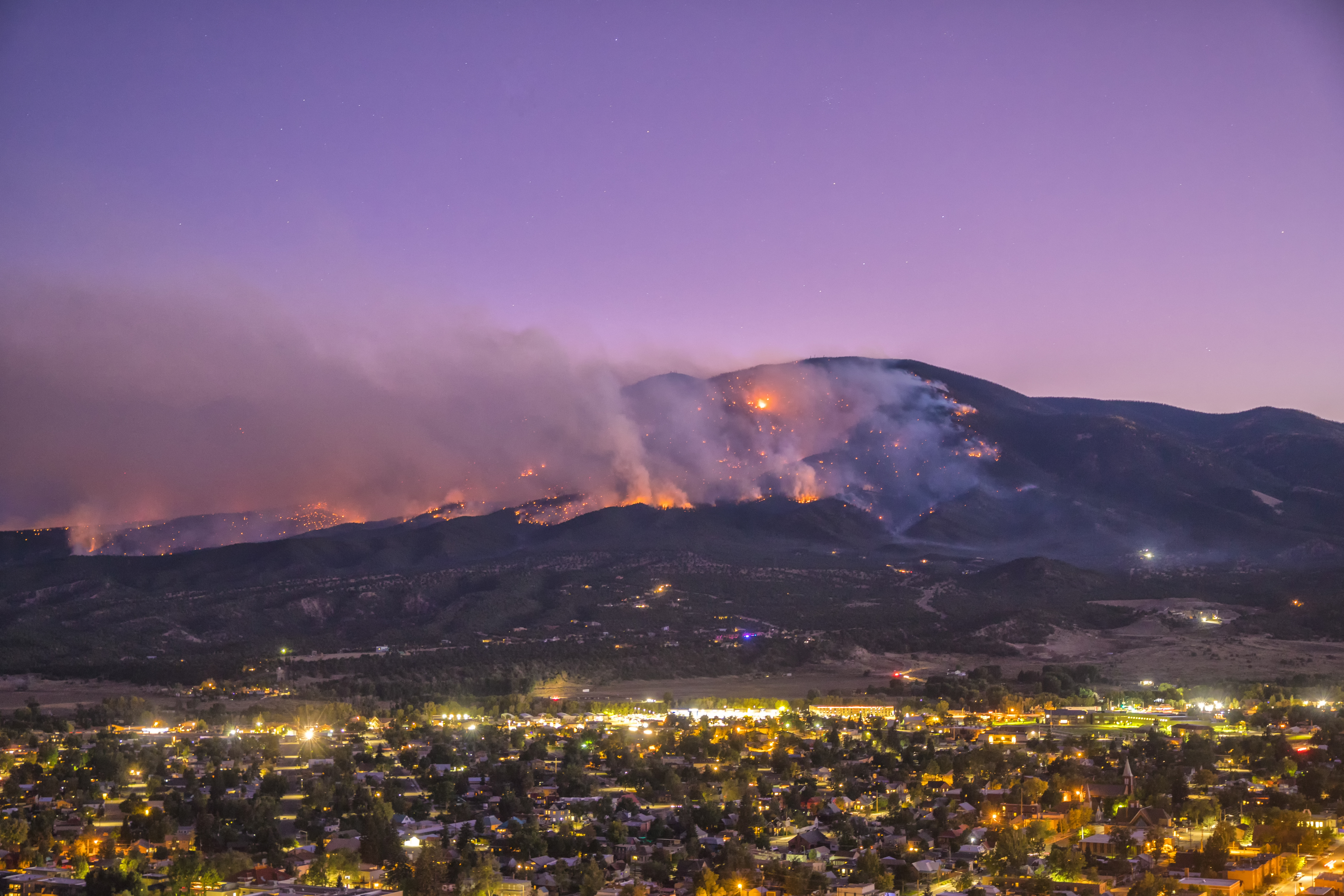 The Decker Fire near Salida, Colorado the morning the author was evacuated. (Credit: Joe Randall)

2019 began beautifully. Ample snow graced the Sawatch and Sangre de Cristo peaks. My home river, the Arkansas, was rising and blue-winged olives were beginning to hatch. At the usual time in late March, I sat down to apply for hunting tags. This exercise gets me dreaming of my favorite time of the year when the cold returns, aspens show off their brilliant display, fishing is spectacular, and my focus turns to elk.

This year was particularly gratifying. My 14 year old son had one year of big game hunting under his belt and I was finally ready to let him try for elk. I remember his smile and obvious gratitude when I agreed to let him seek, in his own right, our most sought after quarry. We applied and got his tag for the unit near our home in Salida, Colorado. 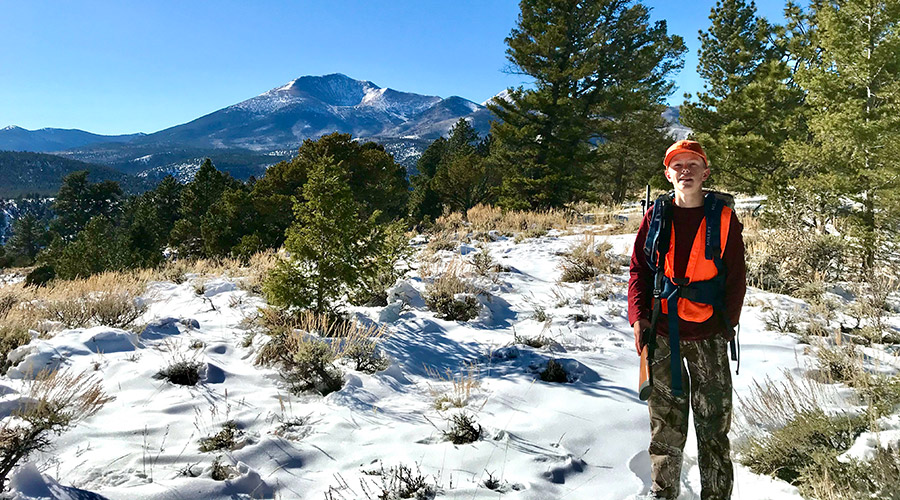 
Everything was cruising along beautifully until the first harbinger of what was to come began to rear its head. Here in south central Colorado we get annual monsoon rains in July and August, which follow two of our driest months, May and June. A welcome savior that folks in this part of the world have come to rely on.

Except this year they didn’t come.

As the dry, warm days crept on, a disquiet grew by the day. Barely a lick of rain in our two wettest months – no bueno! But hey, we live at over 7,000’. Hints of fall are usually apparent in late August, and then soon after, the snow flies. So as August flipped to September, I turned my sights to crisper mornings and anticipation of the hunt.

September started out okay – a couple wetting showers graced the ridges and valleys in the first few days. September 8th looked like another one of those days, and in many ways it was. A bluebird morning followed by building clouds and afternoon thunderstorms.

But on this day, the clouds sent electric fingers down upon a high ridge above my house in the Sangre de Cristo Mountains.

The lightning bolt, so common in Colorado’s high country, ignited a small blaze at 11,000 feet in the Sangre de Cristo Wilderness. This area is typically so high and cold, even in the summer, that fires only consume these landscapes once every few hundred years or so despite regularly being struck by lightning.

I didn’t know until the next day. I didn’t know that my family’s life would soon be turned upside down. I didn’t yet know the changing climate, which led to the abnormally warm and dry conditions, had seeded the conditions to grow a fire and threaten the extraordinary place I’m lucky to call home.

Nothing seemed amiss for several days, even a couple weeks. In fact life seemed fairly normal. The only difference was a small smoke plume some nine miles from my front door.

Forest officials decided to let the fire burn due to its inaccessibility, rough terrain, and distance from any homes or structures. I agreed with this decision. I still do. Plus it was in a Wilderness area where management prescriptions lean towards letting natural processes determine forest health outcomes – something I wholeheartedly believe in. Some places should be left as nature intended them. And many of the trees were dead and in need of rejuvenation. 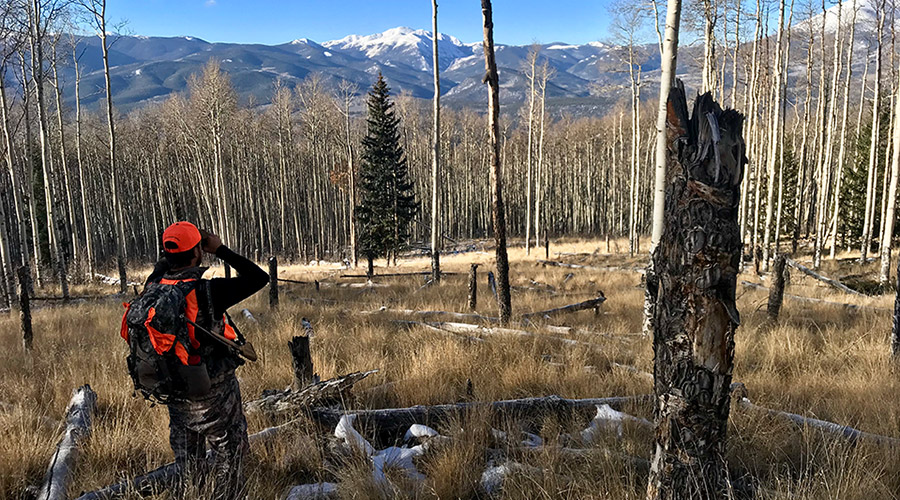 As with many parts of the West, the forests in the upper reaches of the Sangre de Cristo Mountains have been ravaged by disease. Disease largely facilitated by drought and warmer than normal temperatures that have allowed insects to persist rather than be frozen to death over the winter. In fact, Colorado just experienced its warmest September on record and the planet’s warmest times in recorded history are happening right now. The five years warmest years since 1880 are 2014-2018. And in recent years, Colorado’s first snows have been arriving later and later. As the Arctic has warmed over the past several decades, the polar jet stream that brings our winter storms has weakened and taken longer to shoot cold air south to places like southern Colorado.

By October my anxiety ratcheted up a few notches as the winds picked up, the rain still hadn’t materialized and the fire began to march lower down the slopes into thick timber and nearer to home.

As I prepared for bed on the evening of October 7th, I glanced out the window and stared south, as was now customary since the fire started. A faint glow reflected from a benign looking smoke plume over the ridge. Par for the course the past month so I retired for the evening.

Somehow though, neither my wife nor I were surprised when our phones rang simultaneously at 2:39am. We didn’t need to answer to hear the sheriff’s office tell us to evacuate immediately. We knew that was the only possible reason we’d both be getting a call at that time of night.

I staggered out the front door and my worst fears pounded the senses. The sky was thick with smoke, it was very windy, light ash fall was swirling in the breeze while the closest mountain, usually dark in slumber was instead covered in undulating orange flames. It was like a scene from a movie. I strained to believe it was actually happening.

Following a bleary eyed scramble, my family and I were hustling away from our home, away from the abode we had worked so hard to get to for nearly two decades. The fire had more than doubled in size in just a few short hours and we could no longer assume we were immune to it.

The days that followed brought a roller coaster of emotions. Why hadn’t it snowed yet? It was October dammit! It always snows at least once in September and usually the peaks have at least some snow by then. A surreal reality gripped my normally favorite time of year. Would our handsome mountain valley now be subject to flames and smoke every summer and fall? Would this be the new norm? The warming and changing nature of our climate portends an answer I don’t want to hear.

And then came insult with injury. As the fire grew, managers closed all public lands in the northern Sangre de Cristo Mountains – the Sangres as they are known locally. The mountains I have learned, hunted, explored. The mountains I would take my young son to harvest his first elk. Now those places - my hunting grounds - were off limits. 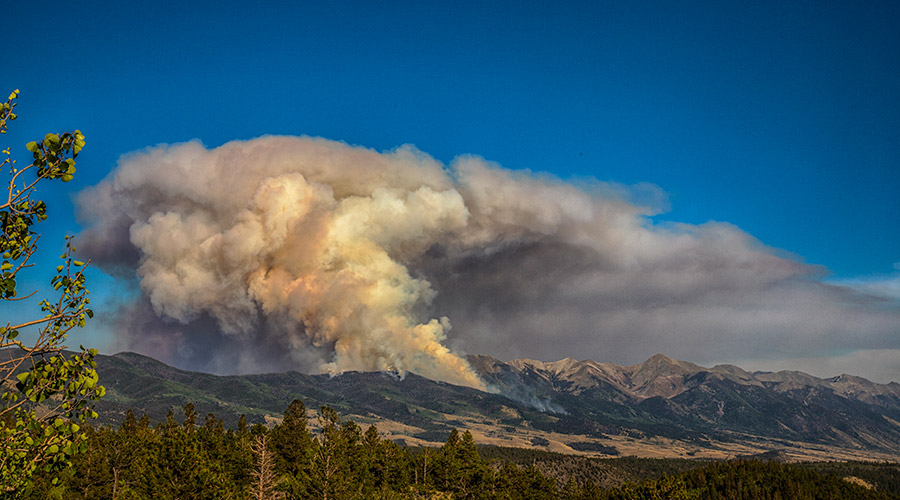 The harsh reality seeped in. Climate change had come to me in a real, true sense. Not some far off flood, hurricane or heat wave reserved for somebody else in another time and place. Because the first fall snows were so absent, and because the monsoons failed to materialize, I was smack dab in the middle of a real life, personal climate crisis. Our home, our family sporting traditions, our beautiful mountain views and our public lands paradise, the very elements that make me tick, all flashed in front of my eyes.

Unfortunately these stories are not so much outliers any more. Low flows closing rivers to fishing and making floating impossible. Record heat during archery season leading to one of the worst seasons in memory. Lack of snow keeping game higher and farther into the mountains and driving down success rates. These are all real scenarios, and just from this year. My sporting friends are all feeling the changes, some overtly, some more subtly, but it’s undeniable and it’s happening across the globe.

Add these lost sporting opportunities to the rapidly growing list of more problematic and dire consequences from inaction on climate change. Then add that our leaders are largely unwilling to tackle the issue and some even deny there’s a problem at all. Their utter stubbornness to address the impacts and work to reverse, or at least slow the trends, paints a bleak future, both for our hunting and angling traditions and for inhabiting the planet. Fortunately the state of Colorado has taken steps to address our changing climate, but in order to truly move the needle for our country, we need federal elected leaders to step up and provide real leadership. And if they don’t, it’s time for them to think of a new line of work.

Fall floated by in a blurred, smoky new reality, passing slowly and eerily while clogged lungs provided daily reminders that things ain’t what they used to be. As a human, I connected with millions of others who have been affected by climate change. As hunter and angler, I bore witness in real time to a sliver of the slow, but becoming more immediate, degradation that may forever alter my sporting life and wither away at the very foundations of our collective outdoor heritage.

How will I, and how will we, take stories like these and begin to build a future where lives, opportunities, and hopes are not lost? How will we demand change, elect leaders that follow our will and get rid of the ones who don’t? And how can it happen now? I mean right now.

It took a personal experience to fully wake me up. I am now in a growing congregation of people, wildlife, and future generations who are subject to past egregious actions and current inaction. We are a loud chorus singing to immediately confront this crises, telling our stories and dreaming of a united future where humanity figures out perhaps the greatest conundrum to ever face us. 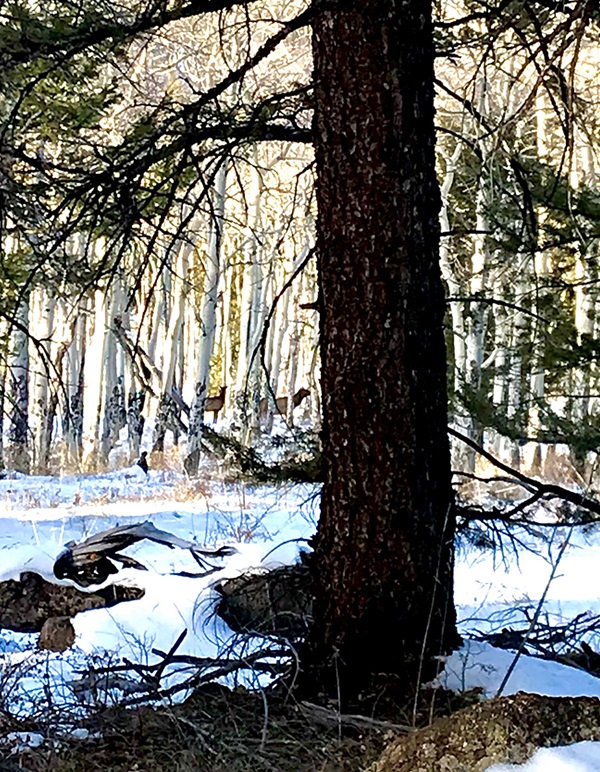 As the snow finally fell and snuffed out the fire just a couple weeks ago, the beautiful, bright blanket over the landscape calmed my senses and allayed my fears. I was granted the serenity to turn back to hunting, back to where my mind belongs this time of year. But I’ll never forget and can’t help but be forever altered and newly yearning for fresh perspectives and new hopes for this amazing planet we’re lucky enough to call home.