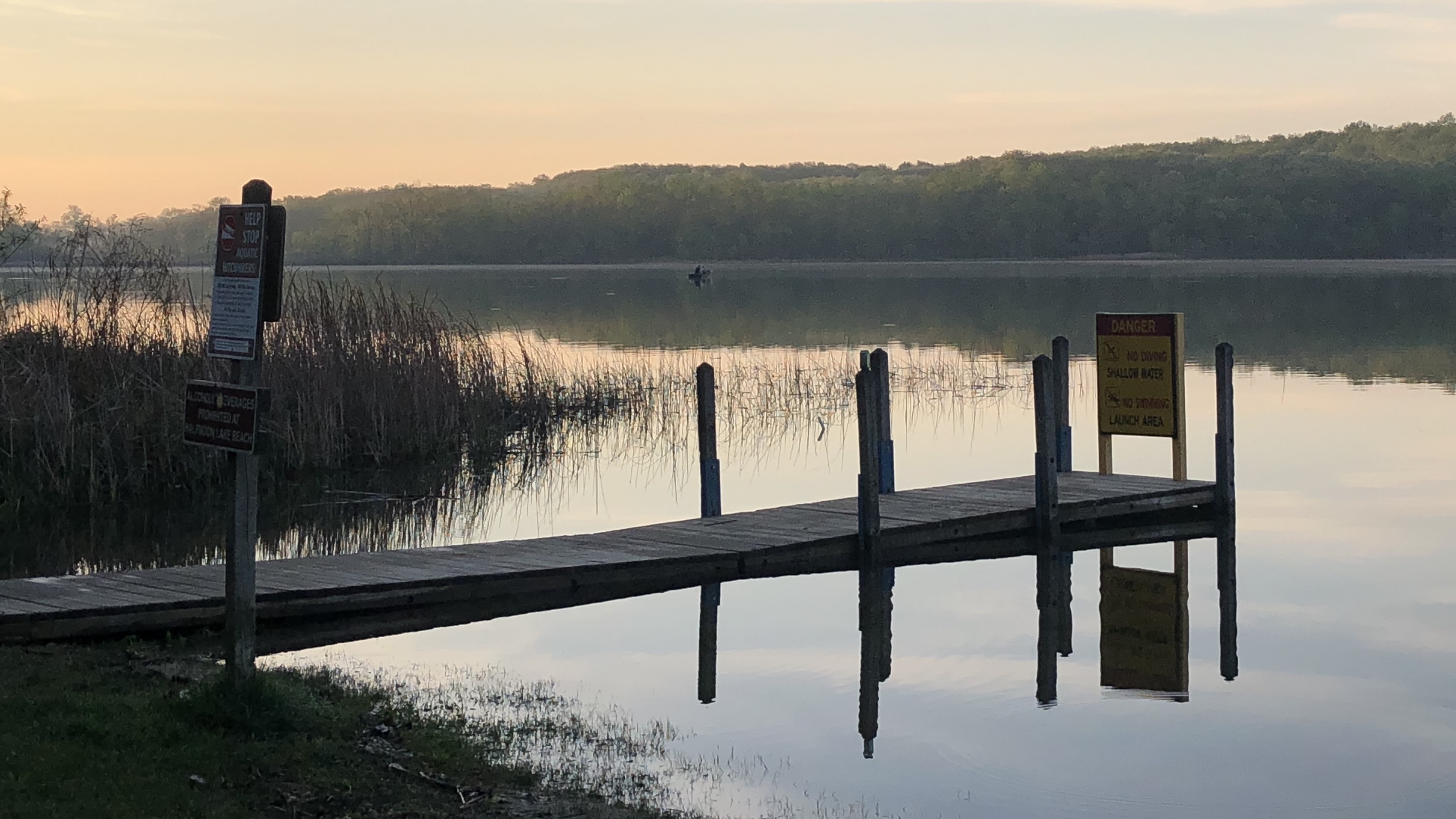 As I unloaded my kayak from the roof rack of my Ford SUV, a pickup truck backed down a trailer with a small aluminum boat at the launch, a little girl helping direct her father behind the wheel. The only other angler at the launch, I gave them plenty of space while I assembled my fly rod. They launched with fishing gear – including her pink Zebco - and I heard her ask why he brought two of his own fishing poles. He replied that it would be quicker to target another species if he wanted. Her curious questions and his patient answers faded from earshot as they slowly motored out on Michigan’s Bruin Lake in the dawn’s Memorial Day glow.

I chose to fish Bruin Lake that morning because while I know well the lakes and trout rivers around where I grew up and have traveled to for fishing most of my adult life in northern Michigan, I don’t know my local waters around Ann Arbor as well. With COVID-19 keeping my recreation local, I decided to start exploring these lakes so I could take my one-year-old son fishing in a few years just like the father and daughter at the boat launch. Fortunately, the Land and Water Conservation Fund (LWCF) has provided abundant access to local waters to fish and the Great American Outdoors Act will provide a lot more for future generations, just as America is rediscovering why outdoor recreation is so important to our individual and collective well-being.

Bruin Lake is one of several small lakes within the Pinckney State Recreation Area in southeast Michigan, only about 20 miles from my Ann Arbor home. I’ve camped, hunted, and run trails in the recreation area, but only fished it a couple times. With public access provided by LWCF-acquired state land surrounding much of the shoreline of these lakes - LWCF has invested over $825,000 in the recreation area -  they offer plentiful fishing access for warmwater species like bass, bluegill, and – my favorite – northern pike. 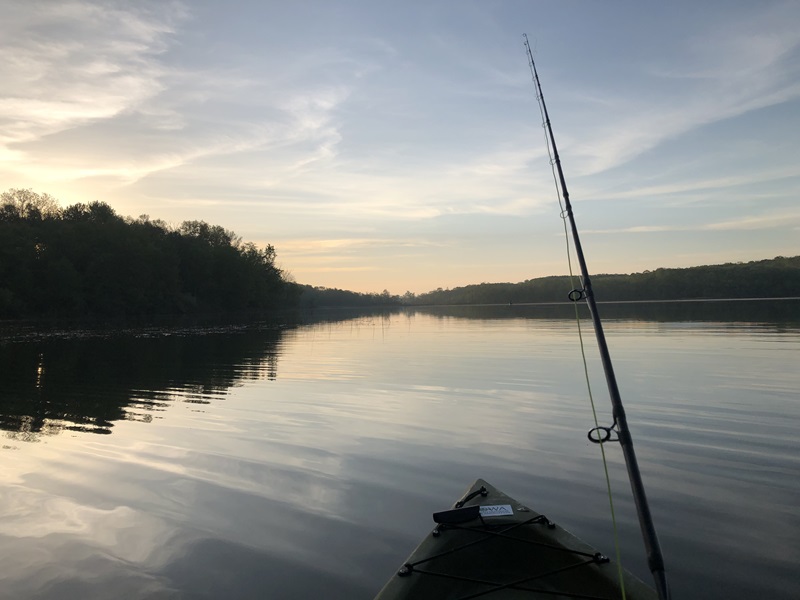 I was loaded for northern pike on the fly with a 9-weight Orvis Clearwater rod and reel and several fly boxes full of large streamers I tied over the winter and spring, as well as a couple with smaller flies for bass and bluegill. Dawn was just breaking and cast an orange glow over the horizon, reflected on the lake. I hugged the edge, casting to the transition of thick emergent weeds and sparse submergent weeds at a short drop-off. I tried a few Clousers and Deceivers in various patterns tied with lead-free materials on 2/0 and 4/0 pike hooks when the water erupted and a northern pike smashed a firetiger bucktail Deceiver that I stripped just beneath the surface. Either the pike missed it or I strip-set it too soon and pulled it out, but adrenaline was all I was left with as I stripped in a slack line and the Deceiver with the orange bucktail on the underside of the collar jacked out of place.

I cast furiously to the same area with no more strikes, but the hunt for northern pike was on to the exclusion of the abundant bass and bluegill I saw. I worked the weeds, the edges, the drop-offs, the fallen trees along the shoreline, varying my retrieve speed, through intermittent rain and then hot sun, with no more pike strikes. As the morning grew late and the jet-skis started drowning out the peaceful respite a morning of fishing offers, I paddled back, but not before tying on a little bluegill popper. I tried to land the popper in front of the bluegills and twitch a bite out of them while playing keep-away from the juvenile largemouth bass. A small bluegill inhaled the popper and I remembered how fun it was to catch bluegill on the fly. 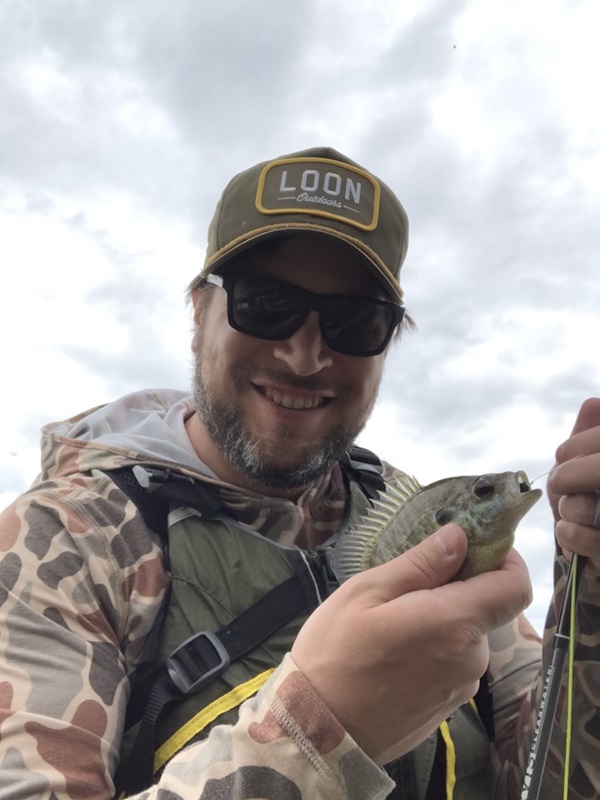 If there’s one thing that the past few months of social distancing has revealed, it’s how much we need experiences like this. More Americans are seeking refuge outside through outdoor recreation now than ever in recent years. Earlier this month, Minnesota’s fishing license sales were up 45% over the same time last year, and its youth fishing licenses had doubled. Turkey licenses in Iowa are up 36% over last year and its fishing licenses are up 53%. Basic fishing licenses in Louisiana were likewise up 53% in April over the previous year and saltwater licenses were up 35%. The packed trailheads, parking lots, boat launches, and public lands across America have shown that we need more places like this to accommodate us while maintaining safe social distance. If the renewed interest in hunting and fishing can be maintained, then recent years of declining participation and conservation funding can start to be reversed. But that's only if the new and reactivated hunters and anglers have places to hunt and fish without being crowded out.

The National Wildlife Federation helped pass the legislation establishing the Land and Water Conservation Fund back in 1964 to provide these places, using royalties from offshore energy development to conserve fish and wildlife habitat while ensuring access to places for Americans to breathe fresh air, stay healthy with outdoor recreation, catch some fish, and hunt wild game. However, the Land and Water Conservation Fund has only been funded to the full amount authorized twice in the last 50 years. For the last three years, it was only funded half of its authorized $900 million. In its history, less than half of the $17.5 billion authorized have been appropriated to LWCF.  Each dollar siphoned off by Congress to another use has deprived current and future generations of Americans with public land and water access that could better help us maintain social distance while staying healthy with outdoor recreation. While I’m fortunate to have LWCF-invested public water access near me, not everyone is so privileged.

A bill up for a vote in the United States Senate could change that, though. The Great American Outdoors Act will permanently fund the Land and Water Conservation Fund and provide money for deferred maintenance projects at national parks and other federal public lands, generating jobs and stimulating the economy while creating new outdoor recreation opportunities. Last week, Senate Majority Leader Mitch McConnell (R-KY) committed to a vote on the Great American Outdoors Act when the Senate returns from its Memorial Day break.

“We urge the Senate to pass this bipartisan legislation, which will be vital to the economic recovery of our nation, creating jobs that will further fuel the outdoor recreation economy,” said Tracy Stone-Manning, associate vice president of public lands at the National Wildlife Federation. “One thing we’ve learned during the COVID-19 pandemic is that Americans want and need to get outside to exercise and find solace on our public lands and community parks. But too many Americans don’t have that access now. Expanding access to these spaces in the coming months and years should be an essential part of our collective national recovery.”

Passing the Great American Outdoors Act this summer would help stimulate our economic recovery from COVID-19 while expanding the opportunities current and future generations have to pursue outdoor recreation just as so many of us are discovering or returning to hunting and fishing.

As the summer heats up and we increasingly seek the water through the public access provided by the Land and Water Conservation Fund with rods in hand and fish on our minds, let’s also remember to practice responsible recreation so that states aren’t forced to close boat launches or public lands, or can reopen them where still closed, without risking returning spikes in COVID-19. Our friends at some of our fellow sportsmen’s conservation organizations put together a website, pledge, and the hashtag #responsiblerecreation to promote some simple guidelines to follow:

We have an opportunity this summer to help our country recover through the jobs and the outdoor recreation access that can be provided by the Great American Outdoors Act and permanent, full LWCF funding. We can keep the public access we already have open by practicing responsible recreation. We can help ourselves recover through simple joy of catching a bluegill, and we can help fish and wildlife recover by teaching a child to fish.