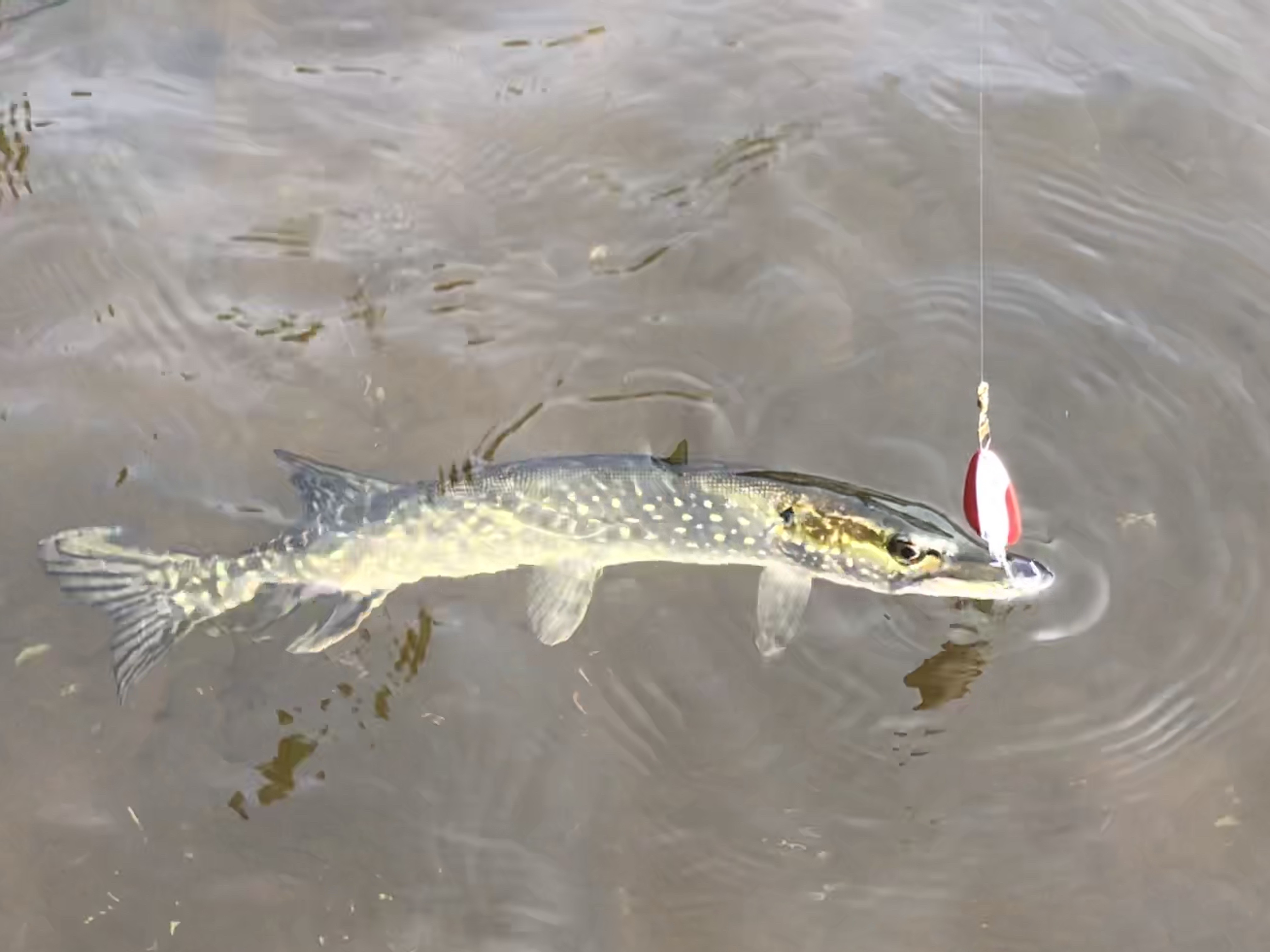 At a time when the world seems in chaos, calm can be found where little needs to change. For my family over the last 60 years, that place has a been a little cabin on a lake in Michigan’s Upper Peninsula where eagles fly, loons call, and northern pike prowl the shallows. I spent last week up there with no internet, spotty cell reception, and a perpetual line in the water. It was a welcome break from politics and news in a place where it seems even the fish there prefer the same old lures.

My great-grandpa bought the cabin back in 1959 as he was nearing retirement as an iron miner. Last year, I analyzed the contents of his old tackle box to learn more about how he fished and found numerous old wooden lures to entice toothy predators like northern pike, along with a few spoons including Johnson’s silver minnow and a small red and white spoon similar to a Dardevle. On the way up to the cabin last week I stopped at a fish market that also sold new and used tackle and saw a new red and white Dardevle Imp spoon that reminded me of the small one in my great-grandpa’s tackle box, so I bought it, having also brought a spinning rod on the trip along with my 9-weight fly rod for pike and 5-weight fly rod for panfish off the dock. 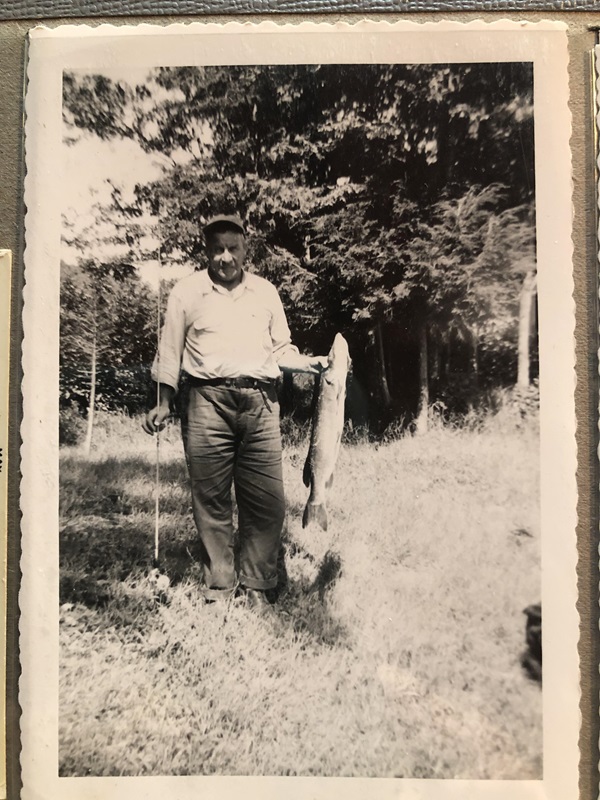 The first thing I did when I got to camp was to unpack and assemble my fishing rods. I walked out on the dock and attached the new red and white Dardevle to my spinning rod – a vintage four-piece Fenwick Feralite my grandpa gave me in college – and cast it past a submerged weed bed near the neighboring shoreline. I retrieved it with frequent pauses and twitches and felt the tug after a few casts. I could feel the pike pull it into the weed bed and I reeled it back, working the pike in to the dock. It wasn’t large, maybe 18-20 inches, one of the hammer-handles the lake seems to have in abundance. I released it. Caught a pike, took a sauna, ate a pasty: it was a complete first day at the cottage.

The next few days were relaxing but less productive fishing. I’ve spent the past year tying giant pike flies that I was certain would trigger strikes one after another on this lake. After that first pike on the dock, the fishing was pretty tough for me, though. I could only see one good follow working the shoreline from my float tube, before the pike turned and swam away unimpressed with my fly-tying skills, apparently, and none from the aluminum rowboat. Over four days I worked every depth, every drop off, every shoreline cover and submerged weed bed with little to show but a few lost flies and a busted rod tip on my 9-weight. 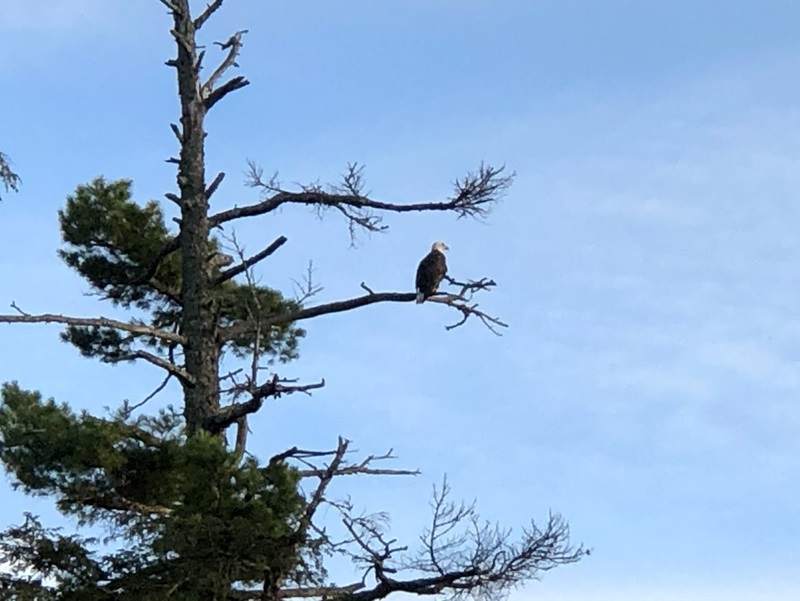 I wasn’t alone on the water, though. A family of loons fished the lake, the mother staying with the chicks and the father bringing fish to them, calling to each other occasionally when separated. A bald eagle perched on the branch of a white pine on the shoreline where we’ve watched bald eagles since I was a kid, even when we rarely saw them anywhere else in Michigan. I was glad, then, that even though I lost some flies, all were tied exclusively with nonlead materials.

Loons can be poisoned by lead when they ingest lead split shot mistaken for pebbles they grind to chew their food or when they catch fish with lead tackle attached to a broken line. Eagles can also get lead poisoning from eating fish with lead tackle attached. Last year I invited several friends from different conservation organizations to the cottage to fish for northern pike and hunt ruffed grouse with nonlead gear. We made a film about it called “Northwoods Unleaded” to promote the voluntary use of nonlead tackle and ammunition because of its impacts on wildlife like loons and eagles. While I was up at the cottage last week, the Association of Great Lakes Outdoors Writers awarded it First Place in the Fishing Category for videos at its annual Awards in Craft, which was welcome news when I eventually returned home.

On a cold morning with frost coating the plastic top of my tackle bag on the dock, I tied a black, red, and white deer hair bass bug on the end of my sinking line. Cast out past the weed bed from the dock, the sinking line took it underwater without the need for additional weights so it acted as a small water-pushing streamer. As I retrieved, it, I saw a northern pike follow it. I paused my retrieve, and the pike struck. I strip-set the hook and played the pike back to the dock. The net was out of reach, though, and the pike looked small – maybe even the same one I’d caught a couple days earlier – so I pulled it up to the dock. It shook in the air and came off the hook, landing in the water and swimming away.

Maybe it was because of the weed guard on the bass bug, I thought, so I pulled out a red and white tungsten conehead streamer I’d tied over the winter to mimic the size and colors of the classic red and white Dardevle spoon. I saw the pike hanging out in the shallows beyond the dock, so I cast the little streamer beyond it and retrieved it right past it – and watched it strike. Another strip set, another play back to the dock, but this time without a weed guard on the hook. I should have netted it. For the second time in ten minutes, I caught the same pike on a different fly and just like before, it shook off the hook as I pulled it up to the dock. 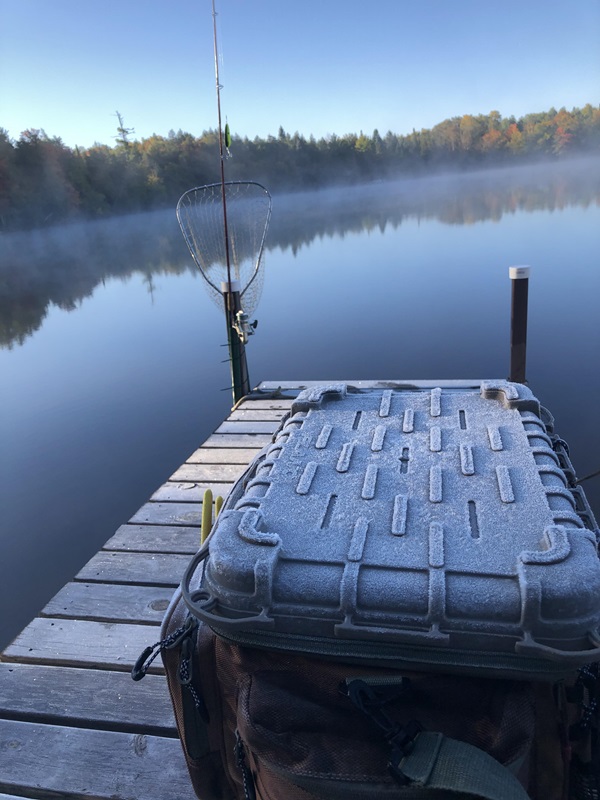 Along with fishing, I did a few little projects around the cottage. I made rod holders for the dock posts out of PVC pipe. I repainted the oars for the aluminum rowboat. After my rod tip broke, I pulled out my late great-uncle’s old tackle boxes in the fishing shed and reorganized them, untangling lines and lures, cleaning tackle of the oxidized lead coated from old split and safely disposing of the lead split shot. While I bring my own fishing tackle, the gear at the cottage gets used by my cousins, their children, my nieces, and guests, and the oxidized lead is a toxin that I don’t want them exposed to, as well as the split shot being lost in the lake and affecting the loons or the eagles. I replaced the lead sinkers with my own tin of Orvis non-toxic tin split shot.

In the tackle boxes, I also found several Dardevle lures in various sizes and colors, included a classic red and white spoon like the one I used to catch the first pike from the dock and mimic with the fly I used to catch the second one. Maybe it’s these turbulent times we live in, but I find comfort in knowing that northern pike have been hunting the Northwoods waters of this earth for about 80 million years, for about the last 100 years they have been consistently caught on the same red and white lures, and for the last 60 years by my family on this very lake. 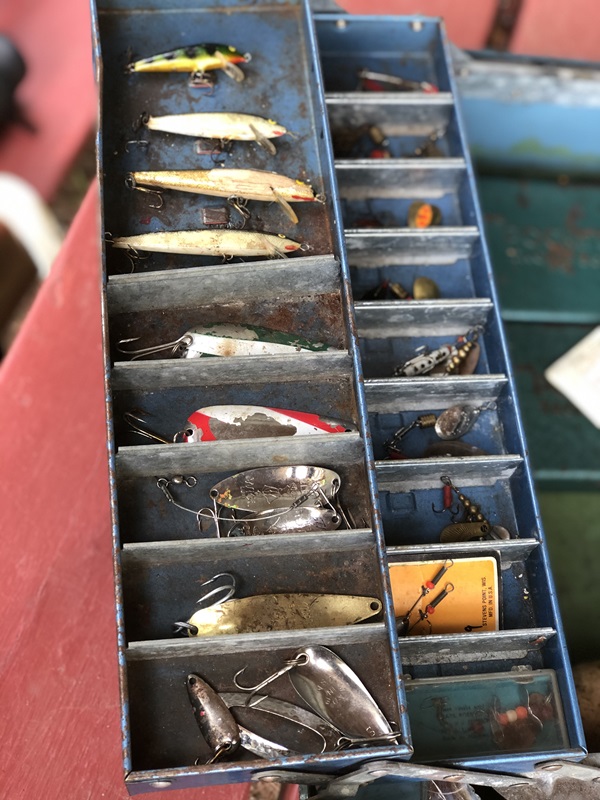 On the way back home, I stopped in the same fish market an noticed an old tackle box for sale with the same metal finish as my great-uncle’s old tackle box. I bought it and its contents for $5 dollars, plus a vintage Rapala, with an idea to start collecting vintage lures. When I got home and opened the tackle box, I found a couple broken reels, a few spools of line, a container of split shot of which I disposed, and – sure enough – a vintage red and white Dardevle spoon.

If the state of our country, the news, this election season, or this pandemic are getting to you, take some time to put a line on the water and let the fish occupy your mind for a few hours. It’s not going to solve the big problems, but you’ll at least enjoy some temporary peace of mind, and isn’t that what fishing is all about?