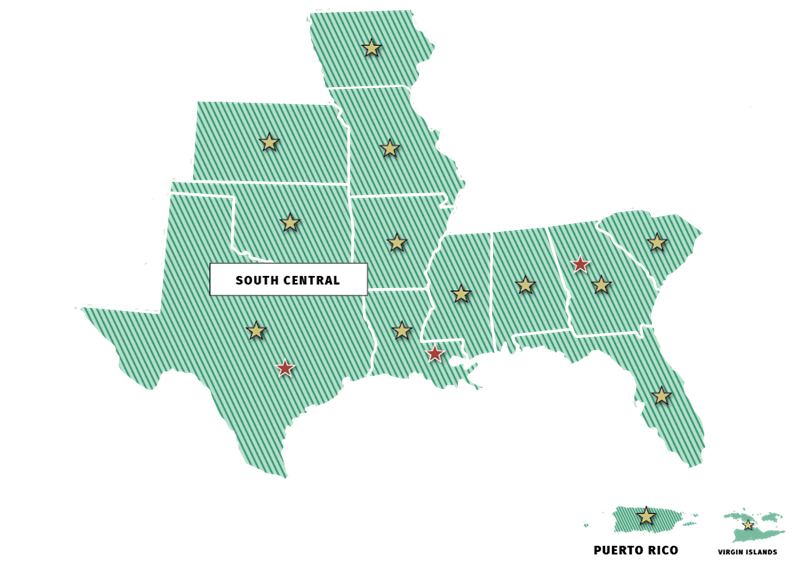 The South Central region spans a vast abundance of natural ecosystems including rivers, mountains, forests, deserts, and oceans that are home to thousands of wildlife and game species, from bears and songbirds to whales and oysters. Unfortunately, many of the ecosystems that these wildlife depend upon are in trouble. Wetlands are vanishing, rivers are slowing to a trickle, native prairies are being destroyed, southern forests are dying, and communities are facing catastrophic flooding from increasingly severe climate-induced storms, and children are staying indoors and missing out on developing a connection to nature.

In collaboration with decision-makers, coalition partners, state affiliates and volunteers, we are helping to find solutions by advocating for wetlands restoration, educating on water conservation and coastal resilience, promoting practices that protect our native prairies and forests, and connecting kids with nature.

Creating the Next Generation of Conservationists and Community Collaborations

Our regional education and engagement programs believe that both people and wildlife benefit when all Americans have clean air and water, safe communities, easy and equitable access to nature, and protection from the threats of climate change. Our Pre-K-12 education programs aim to develop the next generation of conservationists who can successfully address environmental challenges of the future. Our community-based outreach programs aim to educate the public about the critical role urban habitat plays in helping wildlife survive and equip them to take action for wildlife like building monarch butterfly habitats in their communities.

In the face of rapid population growth and persistent drought, Texas' water resources have never been under such intense pressure. Since 2001 the National Wildlife Federation’s Texas Living Waters Project has worked to ensure that Texas manages and uses its limited water resources for the benefit of both people and wildlife. The National Wildlife Federation is committed to protecting the state’s precious rivers, streams, and estuaries streams, and estuaries to better preserve the Texas we love for generations to come.

Restoring the Gulf of Mexico

The 2010 Gulf oil disaster had an enormous impact on the Gulf of Mexico. Lingering effects of the million of gallons of oil spilled are still harming local wildlife. Congress’s 2012 passage of the RESTORE Act, a landmark law that directs fines and penalties from the oil spill to Gulf coast restoration and recovery, represents the largest conservation investment in the nation’s history. The National Wildlife Federation’s campaign is leading efforts across the Gulf to make sure RESTORE funds are used to protect and restore the Gulf’s estuaries and coastal habitats. These resources are essential to restoring wildlife and fisheries.

The wetlands, estuaries, and barrier islands of the Mississippi River Delta provide habitat for migratory birds, waterfowl, economically important finfish and shellfish, and many endangered and threatened species. The delta is experiencing the highest rate of wetland loss in the U.S., losing a football field of marsh into the Gulf every hour due to short-sighted management of the Mississippi River, decades of oil and gas development, and rising sea levels. The National Wildlife Federation is working with national and regional partners to propel bold state and federal action on projects to restore this important coastal habitat for wildlife.

Before Europeans arrived in North America, longleaf pine forests dominated the coastal plain from eastern Texas to southeastern Virginia—as much as 90 million acres throughout the southeast, but today there is less than 3.5 million acres remaining. The loss of these forests has had huge impacts on the region’s wildlife. The National Wildlife Federation has a number of initiatives underway to protect and restore Southeast forests.

In addition, we have staff dedicated to protecting other important ecosystems in our region such as the Everglades, the wetlands in the New Madrid Spillway in Missouri, the Buffalo National Scenic River in Arkansas and the Apalachicola River in Florida.