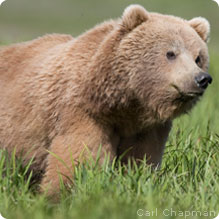 “The recovery of the Yellowstone grizzly bears is an outstanding Endangered Species Act success story.”

More than a decade after it was first proposed, the U.S. Fish and Wildlife Service has finalized the delisting of grizzly bears in and around Yellowstone National Park.

“The recovery of the Yellowstone grizzly bears is an outstanding Endangered Species Act success story,” said Collin O’Mara, president and CEO of the National Wildlife Federation. “This shows how the North American model of conservation can bring species back from the brink when there is dedicated funding, sound scientific management, and consistent collaboration between the federal government, states and the conservation community.”

“Four decades ago, the outlook for these magnificent creatures was dire. Today, the recovery goals for grizzly bears in the greater Yellowstone ecosystem have been exceeded,” said Tom France, Regional Executive Director of the National Wildlife Federation’s Northern Rockies Regional Center. “The grizzly's remarkable comeback proves that the Endangered Species Act works.”

More than 700 grizzly bears now live in the Yellowstone ecosystem, which centers on the park and six adjacent national forests. When grizzly bears were listed under the ESA in 1975, biologists estimated the population at less than 200 animals in the greater Yellowstone area and feared extinction if a declining population trend was not reversed.

"The purpose of the Endangered Species Act is to create self-sustaining populations of species in the wild. This has happened—we are now seeing grizzlies in places where they haven’t been recorded for a century,” said France. “We should all celebrate this success.”

The National Wildlife Federation has worked with federal and state agencies, other non-governmental organizations and many individuals to restore grizzly bear populations to healthy levels. The Federation and its state affiliates helped catalyze the development of state grizzly bear management plans to complement federal ESA initiatives. The Federation has also worked directly with livestock producers and federal land management agencies to eliminate conflicts between livestock and large predators like grizzlies and wolves on more than one million acres of public land in areas around Yellowstone National Park.

“The grizzlies’ recovery in the Greater Yellowstone is a fantastic example of people and agencies working together to secure the future of wildlife and its habitat,” said France. The partnership that has been built around grizzly recovery between federal and state agencies and many, many non-governmental organizations, ranging from the Federation and its state affiliates to local livestock groups, is remarkable. Everybody has pitched in.”

With the delisting of the grizzly from the Endangered Species Act, state fish and wildlife agencies in Montana, Wyoming and Idaho will assume primary management responsibility, but federal and state agencies will continue to cooperate through a joint conservation strategy. The recovery and management plans that guide the decision to delist sets minimum population metrics and other protections to ensure that a sustainable population is maintained.

“Montana is ready to manage this species responsibly,” said David Chadwick, Executive Director of the Montana Wildlife Federation. "We look forward to working with Fish, Wildlife and Parks as they continue to implement Montana’s management plan. This plan protects grizzly populations, supports recovery in other parts of the state, and reduces conflicts with private landowners. The state’s wildlife management toolbox includes hunting and we expect that it will be part of grizzly management when the time comes and when it is supported by good science.”

Today’s delisting only affects grizzly bears in the greater Yellowstone ecosystem. Given that male grizzly bears have a home range of 335 square miles, many wildlife scientists believe the area may be close to capacity for sustaining resident grizzlies.

“This delisting is a testament to the hard work states and conservation groups have put in for decades with grizzlies,” said Dwayne Meadows, the Executive Director of the Wyoming Wildlife Federation. “Like with all game management, this should be scrutinized with best available science and population estimates each year.”

“We have confidence in the Idaho Department of Fish and Game’s ability to manage the bears in a way that conserves grizzlies throughout their range in Idaho,” said Brian Brooks, Executive Director of the Idaho Wildlife Federation.

In other areas of the West, grizzly bears will remain listed under the Endangered Species Act. For example, in the North Cascades in Washington State, the estimated current population is fewer than 10 grizzly bears with no documented reproduction and no likelihood of natural recolonization. Grizzlies are absent from the Selway-Bitterroot Ecosystem in Idaho, the largest unoccupied grizzly habitat in the lower 48 states.

“Now that the Yellowstone grizzlies have recovered, we should focus on rebuilding grizzly populations in places like the North Cascades and the Selway-Bitteroot,” said France. “With the help of the Endangered Species Act and sufficient dedicated funding for collaborative conservation efforts, we can restore populations of grizzly bears in other wild places in the West.”