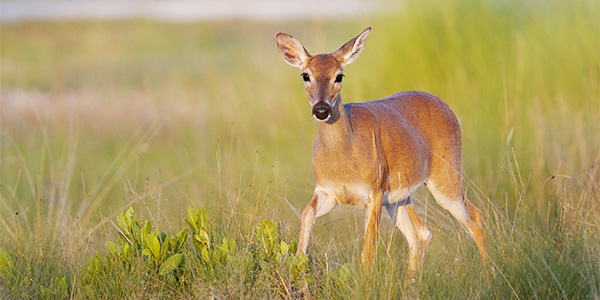 The Key deer is a subspecies of the white-tailed deer. Like other white-tailed deer, they are typically reddish-brown or grayish-brown in color. Males grow antlers. Adult males, or bucks, weigh 55 to 75 pounds (25 to 34 kilograms). Adult females, or does, weigh slightly less. On average, the deer stand only about 24 to 32 inches (61 to 81 centimeters) at the shoulder.

Key deer live on 20 to 25 islands in the southern Florida Keys, hence their name. They used to live across the lower Florida Keys, but now are only found in the areas from Sugarloaf Key to Bahia Honda Key. The National Key Deer Refuge in Florida, where many of the deer can be found, was established in 1953.

Key deer live in all the types of ecosystems found in the Florida Keys, from pine forests to mangroves and freshwater wetlands. They can swim between islands and move around their habitat in search of freshwater.

Key deer eat more than 150 species of plants. The most important part of their diet is mangrove trees and thatch palm berries. Due to encroachment on their habitat and their lack of fear of humans, some of the animals have been known to eat plants in people's gardens.

Because Key deer have lost their fear of humans, there is a serious problem with people illegally feeding them. This makes the deer more vulnerable to dog attacks or getting entangled in fences. It also brings them closer to roads where they can be hit by cars. Feeding Key deer can also cause them to group in a small area, rather than spreading out over the available habitat. Then if one deer is sick, it more easily passes its diseases on to other deer.

The breeding season, or rut, takes place in the fall and early winter. Most mating occurs in October. Pregnancy is about seven months or 200 days, with most fawns born between April and June. Fawns are tiny—only two to four pounds (0.9 to 1.8 kilograms) at birth. Most does have only one fawn per year.

The males drop their antlers in February and March. Their new antlers start to grow immediately and have grown back by August. Most males live about three years and females live about six years.

Key deer once ranged throughout the lower Florida Keys, but now lives primarily in one area, called Big Pine Key, and surrounding small islands. The Key deer is listed as endangered by the Endangered Species Act. Currently fewer than 1,000 Key deer survive, and their future remains precarious. Threats to Key deer include habitat loss from development of coastal habitats and floodplains, car accidents, disease, illegal feeding by humans, and climate change, which is affecting mangroves.

Sometimes called the “toy deer,” the Key deer is the smallest subspecies of white-tailed deer.