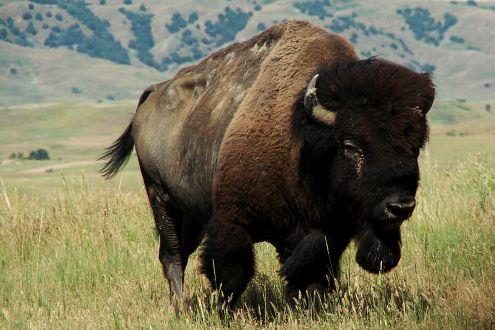 The first tribal government-to-tribal government bison transfer, this unique release comes as part of a 2015 agreement between the Eastern Shoshone and Fort Peck Tribes to engage in a bison trade network with the goal of conserving the ecological and cultural importance of the species. These five bison were released onto 300 acres of protected land, adding to six years of collaborative work by the Federation to transfer bison from federal parks and refuges to tribal lands. Here, the bison can thrive without the threat of unnecessary slaughter faced by bison in Yellowstone.

“This release is the culmination of years of hard work, and the agreement between the Eastern Shoshone and Fort Peck Tribes to share buffalo is indicative of the importance of this animal to our tribal communities,” said Jason Baldes, Eastern Shoshone tribal member and bison coordinator for the National Wildlife Federation. “Restoring buffalo to the Wind River Reservation not only revitalizes the landscape and brings wildlife diversity, but rebuilds our tribe’s cultural and historical connections to the land. We are ‘buffalo people,’ and our ancestors are smiling upon us as we bring our people and the buffalo together once again.”

To compliment the importance of this event, the release followed the 60th annual Eastern Shoshone Powwow. This historic ceremony brought together the tribal community to renew and celebrate Native American culture and preserve the rich heritage of the Eastern Shoshone Tribe.

Bison are an essential cornerstone species to the health of the American prairie ecosystem as well as the cultural, physical and economic health of Native American communities. At least 30 million bison once roamed America's western prairie, however decades of overexploitation, habitat loss, decline in genetic diversity and human conflict have stripped nearly all free-ranging bison from their natural habitat. Deemed America’s national mammal in May 2016, the American bison is a thundering part of the United States national identity being brought back as a wild species by tribal governments and partners like the National Wildlife Federation.

“With the decline of free-ranging wild buffalo, much of our tribal culture had been lost. Cultivating this species on the Fort Peck Reservation has helped restore our cultural, ecological and economic relationships with buffalo.” said Robert Magnan, director of fish and game for the Fort Peck Tribes. “We’ve seen great success in revitalizing buffalo on our lands, and are eager to share that success with the Eastern Shoshone Tribe and others who strive to bring buffalo back to their rightful home in our consciousness and on our landscapes.”

The National Wildlife Federation and tribal partners share a common vision of returning wild bison to their historic habitat while restoring Native Americans' cultural connections to bison, bringing this iconic American species back to its rightful home on the prairies. Learn more about the Tribal Partnerships Program and bison restoration efforts.