As the seasons change, a surprising variety of insects migrate hundreds, even thousands, of miles to new habitats 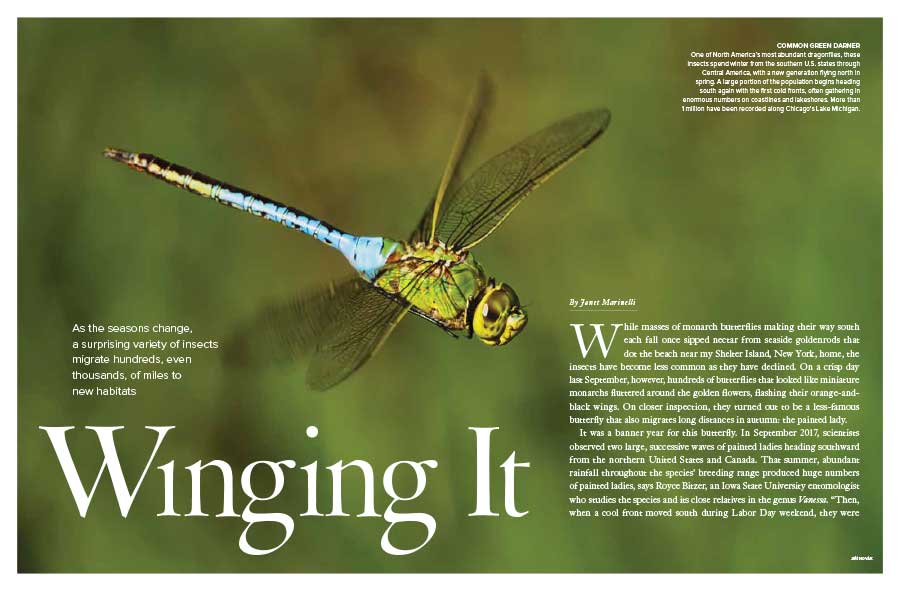 COMMON GREEN DARNER | One of North America’s most abundant dragonflies, these insects spend winter from the southern U.S. states through Central America, with a new generation flying north in spring. A large portion of the population begins heading south again with the first cold fronts, often gathering in enormous numbers on coastlines and lakeshores. More than 1 million have been recorded along Chicago's Lake Michigan.

WHILE MASSES OF MONARCH BUTTERFLIES making their way south each fall once sipped nectar from seaside goldenrods that dot the beach near my Shelter Island, New York, home, the insects have become less common as they have declined. On a crisp day last September, however, hundreds of butterflies that looked like miniature monarchs fluttered around the golden flowers, flashing their orange-and-black wings. On closer inspection, they turned out to be a less-famous butterfly that also migrates long distances in autumn: the painted lady.

It was a banner year for this butterfly. In September 2017, scientists observed two large, successive waves of painted ladies heading southward from the northern United States and Canada. That summer, abundant rainfall throughout the species’ breeding range produced huge numbers of painted ladies, says Royce Bitzer, an Iowa State University entomologist who studies the species and its close relatives in the genus Vanessa. “Then, when a cool front moved south during Labor Day weekend, they were suddenly on the wing, sailing with the winds coming from the north.” When it seemed they had moved on, he says, “there was a second large wave that came southward during the last week of September.” This second wave created a hubbub of excitement around Denver, when thousands of airborne painted ladies were spotted on radar (below). 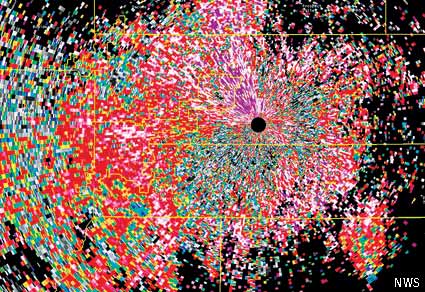 Despite being one of the world’s most cosmopolitan butterflies—found on every continent except Australia and Antarctica—the painted lady’s migrations long remained mysterious. In North America, scientists have learned that the insects migrate northward during spring from the deserts of northern Mexico and the U.S. Southwest. In summer, they have been recorded throughout most of the United States and Canada south of the Arctic. Unlike monarch butterflies, which migrate in fairly predictable numbers, they are inconsistent migrants. According to Bitzer, the size of the migration can vary substantially from year to year, often depending on climatic anomalies such as El Niño events.

In the Eastern Hemisphere, recent studies reveal that the species’ migration there can make the round-trip, up-to-6,000-mile, multigenerational journey of North America’s monarch seem like a leisurely jog. Each spring, the diminutive painted ladies—each weighing less than a single paper clip—cross the punishing Sahara Desert and then the Mediterranean Sea, continuing through Europe as far north as the Arctic Circle. They remain there for just a few weeks before their offspring begin retracing the route in autumn—an epic 9,000-mile trek. Throughout their range, Bitzer notes, “much remains to be discovered about the butterflies’ habits and how their behavior and seasonal distribution vary by geographic location.” 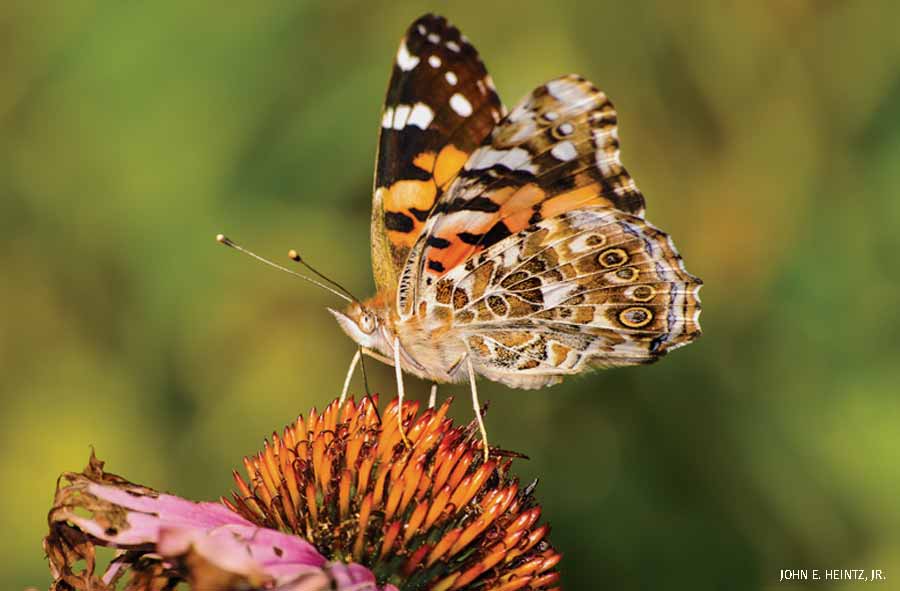 PAINTED LADY  | Like monarchs, painted ladies complete their long migrations over the course of several generations. Traveling north, female butterflies lay eggs on plants in the daisy family, particularly thistles, on which emerging larvae munch. Once caterpillars have spun their chrysalises and emerged as adults, this new generation continues the journey, fanning out across North America to feed on wildflowers such as blazing star, iron weed, joe-pye weed, milkweed and aster.

The same could be said of most migratory insects. Though scientists have long scrutinized the seasonal movements of larger animals, from birds and caribou to salmon and whales, they only have recently begun to take a close look at insect migration. According to Dara Satterfield, a post-doctoral researcher at the Smithsonian Institution who studies the phenomenon, it was only in the past 100 years that researchers recognized that insects could travel long distances. Even then, they “assumed insects were being haphazardly blown by the winds, unable to control their direction,” she says.

Thanks to innovative radar and other technologies, combined with observations by entomologists and citizen scientists, the fact that many insects migrate long distances is now well accepted. While many small species indeed are blown randomly about by wind, Satterfield says, studies have shown that some larger-bodied insects “can select winds moving in favorable directions and, using the winds to their advantage, travel more than 400 miles per night.”

Like all migrating animals, insects are driven by shifts in the availability and location of food and other vital resources. Recently, scientists discovered that the magnitude of these insect movements can be staggering. In a 2016 report in Science, researchers from Great Britain and Israel calculated that 3.5 trillion insects migrate above the southern United Kingdom annually, dwarfing the estimated 2.1 billion migrating passerines (songbirds and other perching birds) that traverse the region each year.

That sheer number of insects, along with their 3,200 tons of biomass, led the scientists to speculate that insect migrations play a major role in redistributing energy and nutrients between geographic regions. If densities observed over the southern United Kingdom “are extrapolated to the airspace above all continental landmasses,” they wrote, insect migration “represents the most important animal movement in terrestrial ecosystems.”

Not surprisingly, some migratory butterflies and moths are thought to play a role pollinating crops and wildflowers. The migration of dragonflies, meanwhile, “is an underappreciated ecological phenomenon," says Sarina Jepsen, director of endangered species and aquatic programs at the Xerces Society for Invertebrate Conservation. Because dragonflies begin their lives underwater, the insects link terrestrial and aquatic ecosystems, she says. And as fierce predators that gobble up a plethora of organisms, they also are an important source of pest control and in turn provide food for a variety of other animals.

According to Satterfield, there is no published list of the world’s migratory insects. In North America, entomologist Mike Quinn has compiled a list of 71 migratory species, including insects from five different orders: butterflies and moths, dragonflies, beetles, grasshoppers and true bugs such as the large milkweed bug. Butterflies comprise the largest group at 27 species, followed by 20 species of moths and 15 different dragonflies. Here we highlight just a handful of these remarkable migrants. 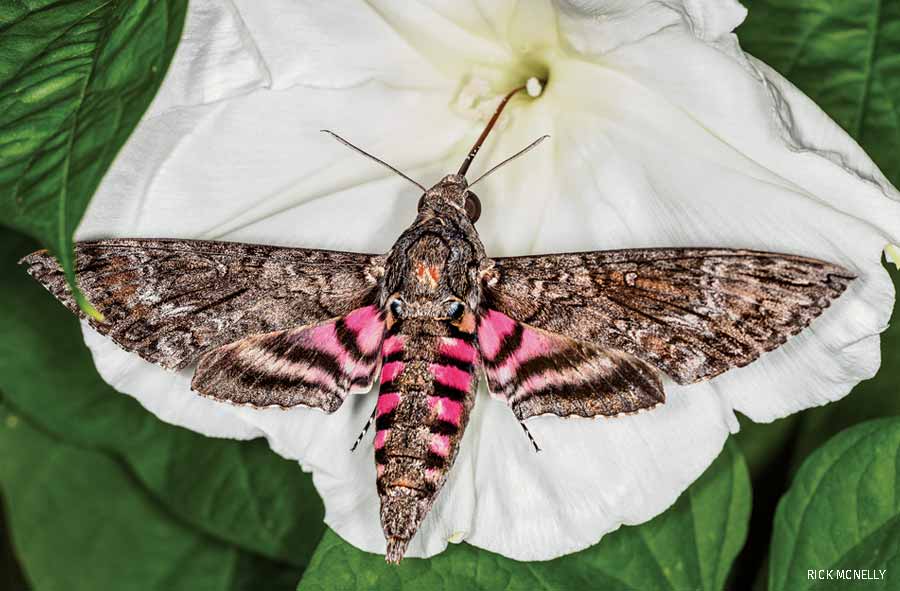 PINK-SPOTTED HAWKMOTH  | The range of this magnificent insect is believed to be centered primarily in the Tropics and Subtropics, including Central America, Mexico and the extreme southern United States. As the mercury climbs, the moths migrate northward to Colorado, Michigan, Maine and British Columbia and southward to Patagonia and the Falkland Islands for the Southern Hemisphere's summer. Unlike caterpillars, which feed during the day, nocturnal adults are expert at finding sweet-smelling flowers, such as sacred datura, with long floral tubes holding pools of nectar. 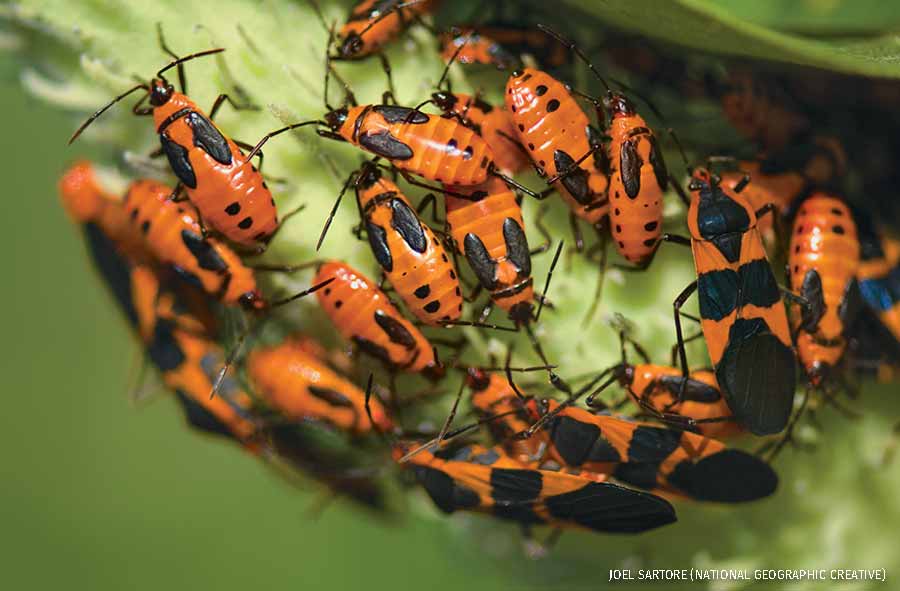 LARGE MILKWEED BUG  | Large milkweed bugs—like their fellow milkweed denizens, monarch butterflies—are protected by bright orange-and-black coloration, which predators associate with nasty-tasting chemicals in the plants they eat. The bugs have another trait in common with monarchs: Many undertake lengthy migrations that follow the spring emergence of milkweeds from the southern states and Mexico, where they overwinter, to southern Canada, where they spend summer. Also like monarchs, they cannot survive winter cold, so return to their southern haunts again in autumn. 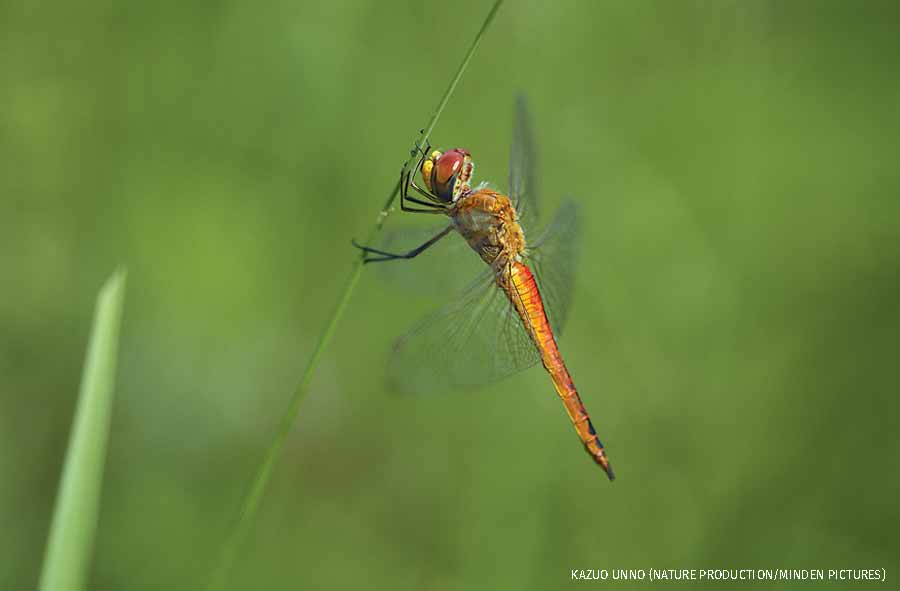 WANDERING GLIDER | This champion of insect migrants is found on every continent but Antarctica. Aptly named, wandering gliders hitch rides on global wind currents while feeding on tiny airborne plankton. In the Western Hemisphere, they fly north from the Tropics in spring, reaching nearly every state and southern Canada over several generations, and return in fall. Traveling from India to East Africa and back, Eastern Hemisphere dragonflies migrate 2,200 miles across the Indian Ocean—the only known transoceanic insect migration—covering a total of 11,000 miles or more. 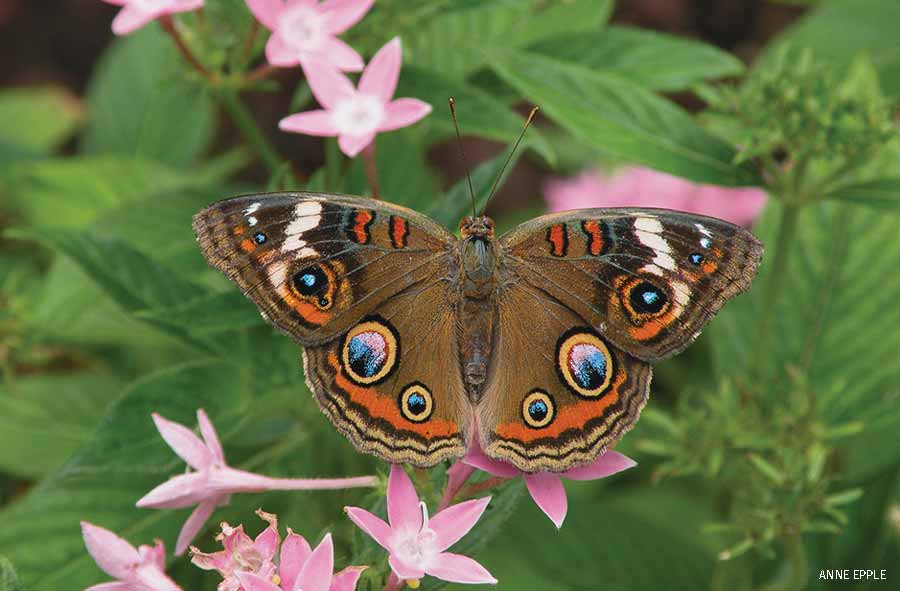 COMMON BUCKEYE  | One of North America’s most striking and readily identifiable butterflies, the common buckeye is a resident of U.S. southern states and nearly all of Mexico, migrating north in late spring to spend the summer throughout the United States, with the exception of Montana, Idaho, western Wyoming and Washington. In Canada, the butterfly usually is a rare stray east of Saskatchewan, but in years with favorable weather, its numbers swell, creating large temporary colonies. By late summer and autumn, common buckeyes head back south for the winter.

Janet Marinelli wrote about the benefits of planting wildlife hedges in the June–July 2018 issue.

Make Your Yard a Spray-Free Zone »
Habitat Highways »
NWF Field Guide to Insect and Spiders »
100 Years Strong: Protecting the Future of the Migratory Bird Treaty Act »
Up from the Depths »