Without any public review, the U.S. Department of the Interior last year announced a major change in the way it interprets one of the nation’s most-effective wildlife laws, the Migratory Bird Treaty Act (MBTA). The agency said the law no longer applies to incidental bird kills, essentially eliminating certain protections for more than 1,000 migratory bird species (such as brown pelicans, above, and snow geese, below) that previous administrations—both Republican and Democratic—had enforced for decades. 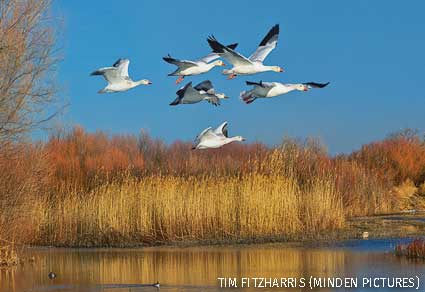 “This decision sends a signal to industry that commonsense measures to protect birds are no longer needed,” says National Wildlife Federation President and CEO Collin O’Mara. In response, NWF has joined a coalition of six conservation groups that is taking legal action to overturn the controversial policy.

Passed by the U.S. Congress in 1918, the MBTA made it “unlawful at any time, by any means or in any manner” to take or kill native birds with unintentional but foreseeable actions. The law, for example, helped secure millions of dollars in penalties for wildlife recovery after the 2010 BP Gulf oil spill killed or injured hundreds of thousands of birds. But last December, Interior officials reversed the law’s interpretation, proclaiming they will stop prosecuting or fining oil companies and other businesses that inadvertently kill large numbers of avian migrants. “Without having to worry about such incidental but foreseeable harm to birds, companies can stop covering oil waste pits, retrofitting power lines to prevent electrocutions or taking other measures to protect birds,” says NWF Senior Counsel Jim Murphy.

In the pending legal case, NWF and its partners maintain that the administration’s new policy contradicts the explicit language Congress used to stop massive bird kills when writing the MBTA. The matter currently resides in a federal district court. 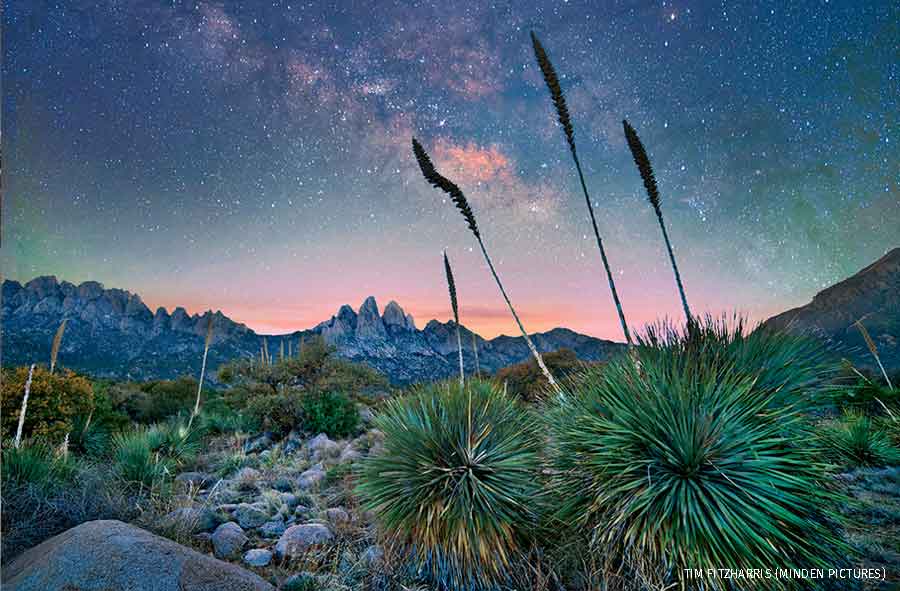 Founded in 1914 by Aldo Leopold—then a young federal forester and eventually one of the nation’s greatest conservationists—the group now called the New Mexico Wildlife Federation (NMWF) became one of NWF’s first state affiliates in the late 1930s. “Ever since, it has been an incredibly powerful ally in our work, particularly on public lands issues,” says Lew Carpenter, NWF Rocky Mountain director of conservation partnerships.

Today, with some 80,000 members, NMWF is the state’s largest and most influential sporting organization. Its long list of accomplishments includes helping New Mexicans secure protection for 2 million acres of public lands and restore populations of elk, bighorn sheep and pronghorn. It also was the catalyst behind successful efforts to establish the state’s two newest national monuments: Rio Grande del Norte and Organ Mountains–Desert Peaks (above). 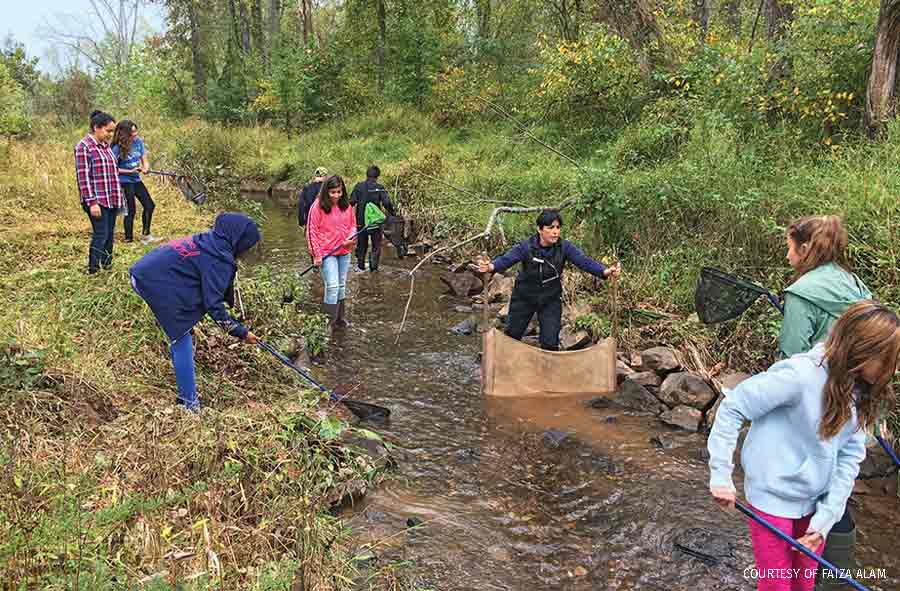 Since their launch in 2011, the U.S. Department of Education Green Ribbon Schools (ED-GRS) awards have recognized 386 public and private schools, 62 school districts and 40 colleges and universities for their exemplary efforts to reduce environmental impacts, improve student and staff health and provide effective environmental curricula. NWF provided key input in the development of the program. This year, ED-GRS is honoring 46 schools, six districts and six postsecondary institutions in 26 states. More than a fourth also participate in NWF’s Eco-Schools USA program. Lanier Middle School in Fairfax, Virginia, for example, is honored for its cost-saving energy, water and paper conservation programs and its Outdoor Living Classroom (above), which includes an NWF certified wildlife habitat. The federal awards “highlight diverse examples of sustainability,” says ED-GRS Director Andrea Suarez Falken. “We assess candidates based on resources available to them, rather than in comparison to each other.” Forty-five percent of the 2018 honorees serve disadvantaged student bodies. 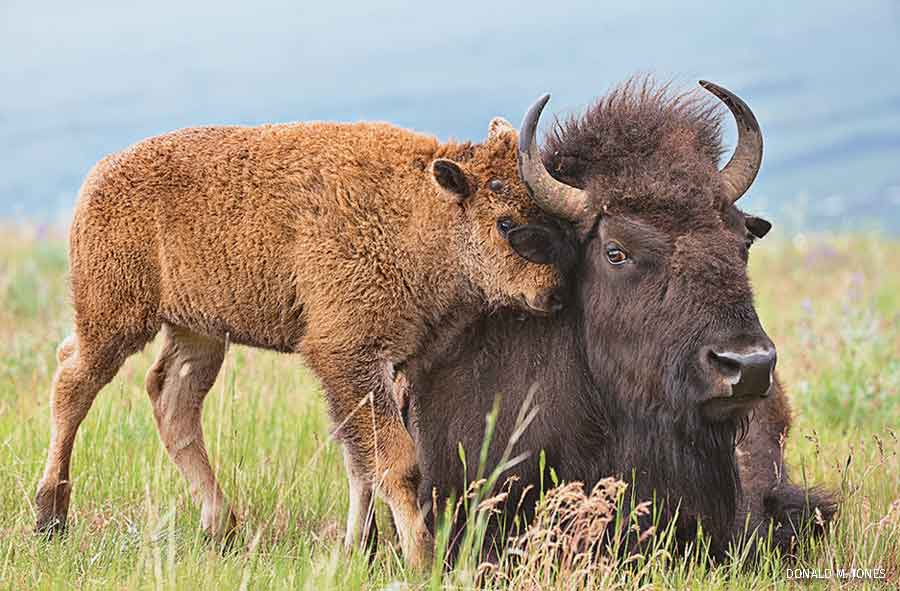 Leaders from several Native American tribes, Canadian First Nations, government agencies and nonprofit groups came together on the Flathead Indian Reservation in Montana earlier this year to discuss efforts to restore genetically pure American bison to the northern Great Plains. Co-hosted by NWF and the Confederated Salish and Kootenai Tribes, the “Buffalo Unites Us” conference provided a rare forum for different factions to express their views.

“The state of Montana has dragged its feet completing a plan to establish wild bison (above) on public lands within its borders,” says Sarah Bates, deputy director of NWF’s Northern Rockies region. Montana law requires state wildlife officials to prepare a bison management plan before any restoration projects can proceed.

Much of the meeting focused on a specific proposal to introduce bison to Montana’s Charles M. Russell National Wildlife Refuge, which contains ideal habitat for the United States’ official national mammal. “It is one of the best places on the continent to restore wild bison,” says NWF Regional Director Tom France. The animals could be transferred from the nearby American Prairie Reserve, a Federation partner.

NWF has worked closely with leaders of more than a dozen tribes in recent years on a broad vision of restoration that includes establishing herds on reservations and on public lands where tribes would share in managing bison as wildlife, not livestock. 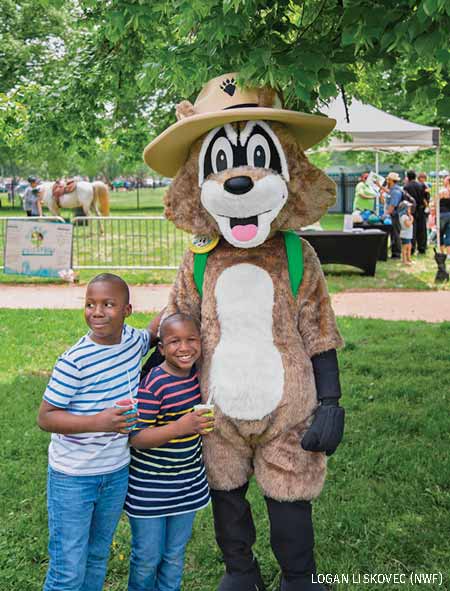 The city of Baltimore was officially certified as NWF’s 108th Community Wildlife Habitat last spring after a five-year effort to meet the program’s rigorous standards by staff at the Federation’s Mid-Atlantic Regional Center, its affiliate the National Aquarium, local schools and other partners. Now the largest certified community in the Chesapeake Bay watershed and the fourth largest in the country, the city boasts more than 500 NWF-approved wildlife habitats, including a 10,000-square-foot bird garden filled with 12,000 native plants outside the Baltimore Orioles’ Camden Yards stadium.

“By coming together to create wildlife-friendly spaces for orioles, blue crabs, terrapins and many more iconic Maryland species, the people of Baltimore are helping both urban wildlife and their community thrive,” says NWF Regional Executive Director Jennifer Mihills.

The Federation announced the certification during the city’s first annual Wildlife Week celebration, which included a visit from NWF ambassador Ranger Rick (above) and events that showed how residents and businesses could help protect the Chesapeake’s bountiful ecosystem.