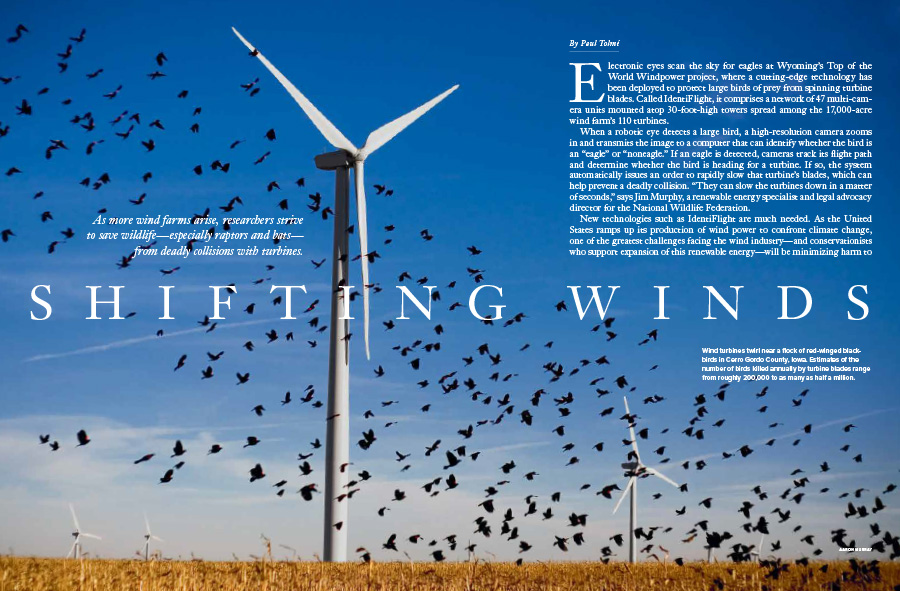 Wind turbines twirl near a flock of red-winged blackbirds in Cerro Gordo County, Iowa. Estimates of the number of birds killed annually by turbine blades range from roughly 200,000 to as many as half a million.

ELECTRONIC EYES scan the sky for eagles at Wyoming’s Top of the World Windpower project, where a cutting-edge technology has been deployed to protect large birds of prey from spinning turbine blades. Called IdentiFlight, it comprises a network of 47 multi-camera units mounted atop 30-foot-high towers spread among the 17,000-acre wind farm’s 110 turbines.

When a robotic eye detects a large bird, a high-resolution camera zooms in and transmits the image to a computer that can identify whether the bird is an “eagle” or “noneagle.” If an eagle is detected, cameras track its flight path and determine whether the bird is heading for a turbine. If so, the system automatically issues an order to rapidly slow that turbine’s blades, which can help prevent a deadly collision. “They can slow the turbines down in a matter of seconds,” says Jim Murphy, a renewable energy specialist and legal advocacy director for the National Wildlife Federation. 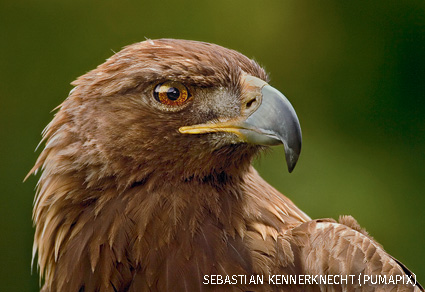 New technologies such as IdentiFlight are much needed. As the United States ramps up its production of wind power to confront climate change, one of the greatest challenges facing the wind industry—and conservationists who support expansion of this renewable energy—will be minimizing harm to wildlife. The risks range from habitat loss during wind farm construction to, most worrisome, deadly collisions of birds and bats with spinning turbine blades.

Reducing those risks will be no small challenge. Many of the best locations for wind power are also prime wildlife habitat, including migratory corridors for birds and bats, ridgetops where raptors hunt and prairie grasslands critical to imperiled grassland birds. Failing to protect such species may slow wind energy’s growth by spurring lawsuits and slowing investment in and regulatory approval of wind projects. That’s the take-home message of a January 2019 NWF report, Responsible Wind Power and Wildlife, which concludes that, if not addressed, threats to wildlife “could lead to significant harm to some species or present regulatory and economic hurdles to achieving the wind power development necessary to reduce carbon emissions in time to avoid catastrophic warming levels.”

Most conservationists agree that climate change is the greatest long-term threat to birds and other wildlife. Many also view wind power as one of the key renewable energies that could replace our fossil fuel-dominated energy system. “That said, we should not sacrifice wildlife through poor implementation of wind power,” says Murphy, who coauthored the NWF report. “We can build out wind at the scale and pace we need without causing undue harm.” 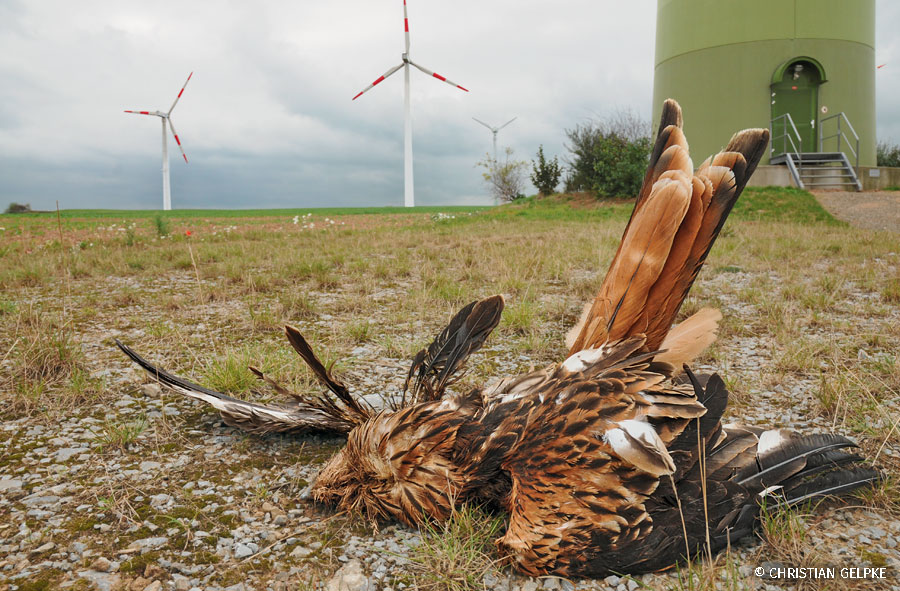 That scale and pace are accelerating. During the past decade, the United States more than tripled its wind energy capacity, and wind now supplies more than 6 percent of the nation’s electricity, enough to power 26 million homes, according to the American Wind Energy Association. Generating that energy requires lots of infrastructure—more than 59,000 turbines in 43 states plus Guam and Puerto Rico—on wind farms that often cover thousands of acres with towers reaching 300 feet into the sky and blades more than 250 feet long. As the industry’s footprint grows larger, more and more important wildlife habitat will overlap with wind farms, increasing the potential for harm, particularly turbine collisions. 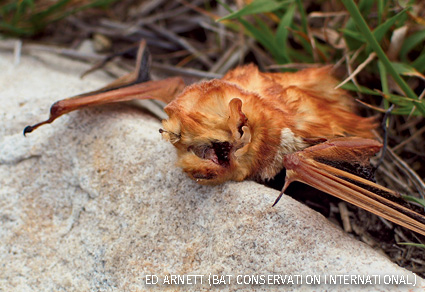 Because many wind farms do not publicly share their data—and surveys for collision fatalities are not nationally standardized—the exact number of birds killed by turbines is unknown. Estimates range from about 200,000 to as many as half a million birds of some 250 species each year. The majority are the most abundant birds—passerines, or perching species such as songbirds. Though these numbers may seem high, “wind power’s threats to most bird species do not appear to be having significant population-level impacts,” notes the Federation report. By contrast, it points out, agricultural pesticides kill an estimated 67 million birds a year, automobiles 200 million, buildings and windows almost 600 million and outdoor cats a whopping 2.4 billion.

Wind energy’s threat to birds burst into the national consciousness in 2006, when a California Energy Commission study estimated that a large wind farm on Altamont Pass east of San Francisco annually killed between 75 and 116 golden eagles—a federally protected species—in addition to thousands of other birds. “Altamont was a real wake-up call,” says Garry George, clean energy director for the National Audubon Society. “Until that time, few people had thought about wind and bird deaths.”

One critical lesson learned at Altamont is that wind farm locations must be chosen carefully. Situated along a Pacific coastal bird migration corridor—and brimming with ground squirrels and other prey—Altamont Pass is prime raptor habitat, particularly for golden eagles.

To encourage wind farms that are less risky for eagles and other wildlife, the U.S. Fish and Wildlife Service (FWS) in 2012 published its Land-Based Wind Energy Guidelines. Though these guidelines are voluntary, wind developers who ignore threats to wildlife risk lawsuits or criminal prosecutions under laws such as the Endangered Species Act, the Bald and Golden Eagle Protection Act and the Migratory Bird Treaty Act.

In 2013, Duke Energy Renewables became one of the first wind developers successfully prosecuted under the Migratory Bird Treaty Act. Duke pleaded guilty to killing 14 golden eagles and 149 other birds at two Wyoming wind farms, paying $1 million in fines and agreeing to implement measures to reduce the deaths. To fulfill that agreement, the company took steps such as deploying IdentiFlight in March 2019 following several years of testing. Tim Hayes, the company’s environmental director, says he hopes the technology will make eagle deaths “a truly rare event.”

Wind turbines also pose a threat to bats, animals already facing population declines from habitat loss and disease. A study published in Bioscience concluded that more than 600,000 bats died at wind facilities in 2012 alone. Most at risk are migratory tree-roosting species—including the hoary bat, eastern red bat and silver-haired bat—perhaps in part because they roost in tall trees and “might perceive the silhouette of wind turbines against a night sky as potential roost trees,” says Michael Schirmacher, director of the wind energy program at Bat Conservation International and program coordinator of the Bats and Wind Energy Cooperative. Some of the highest fatality rates occur in the mid-Atlantic section of the Appalachian Mountains, a region that provides stopover habitat for migrating bats. As with birds, the precise number of deaths is unknown, but a 2017 study in Biological Conservation cited research estimating that 128,000 hoary bats are killed annually by wind turbines across the United States and Canada. 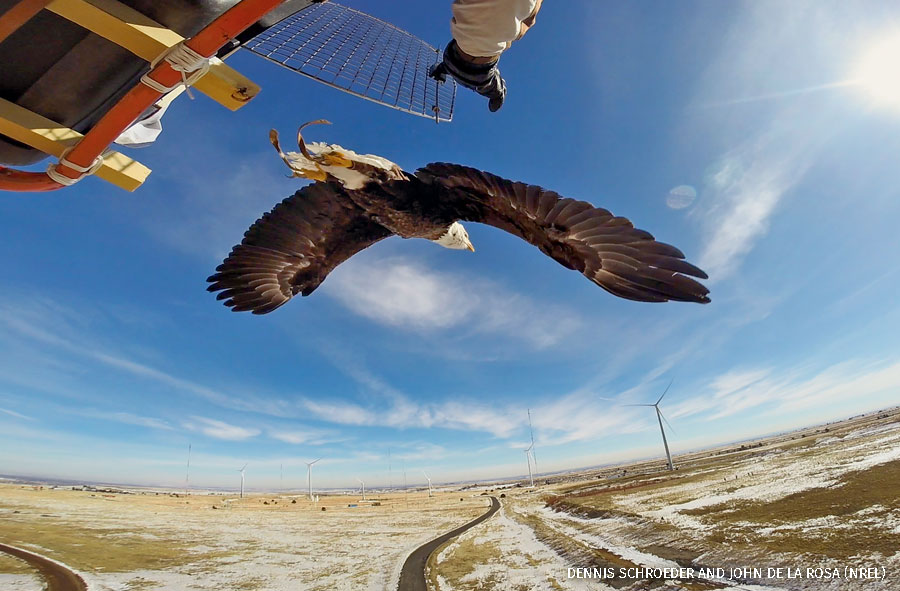 At the National Wind Technology Center in Boulder, Colorado, a veterinarian releases a bald eagle (above) as part of research to develop a system to prevent bird strikes with wind turbines. A network of cameras atop 30-foot-high towers (below) at Wyoming’s Top of the World Windpower project allow operators to curtail turbines when cameras spot a raptor approaching the blades.

To protect both birds and bats, a technological race is on to make turbines safer. Spearheading an effort to evaluate new technologies is the American Wind Wildlife Institute (AWWI), a nonprofit consortium of wind power developers, wildlife agencies and conservation groups, including NWF. With funding from the U.S. Department of Energy, the institute is testing IdentiFlight at a wind farm in Oregon as well as a different technology, called DTBird, at wind farms in California and Washington. DTBird is a so-called detection-and-deterrence system that uses cameras to identify birds and an “audible deterrent” to divert them, says Taber Allison, AWWI’s director of research. Think of a loud car horn followed by a “deliberately irritating or annoying” noise, Allison says.

In Southern California, wind farms in the Tehachapi Mountains are using radio telemetry to safeguard endangered California condors. When one of 170 of the state’s wild condors comes within 2 miles of the Tehachapi Wind Resource Area, antennas detect a signal from the bird’s radio collar and send an alert to employees, who determine the bird’s position and shut down that area’s turbines. (Raised in captivity, all wild condors have been outfitted with radio collars.) So far, no condors have died at the site. 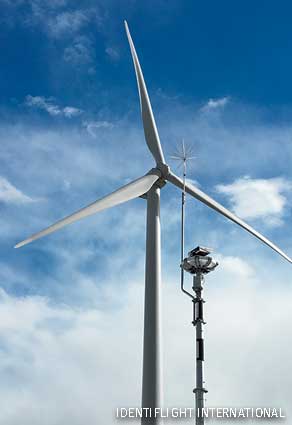 To reduce bat deaths, researchers are developing novel systems based on deterrence. These systems use speakers that continuously emit high-pitched ultrasonic sounds that interfere with the animals’ ability to echolocate—or navigate by sound. In March, NRG Systems announced that a test of its Bat Deterrent System, in combination with shutting turbines down when bats are most active, had reduced fatalities by 67 percent at Illinois’ Pilot Hill Wind Project. Recently, the system also was deployed by Kawailoa Wind, the state of Hawai‘i’s largest wind farm, located on the island of O‘ahu.

Despite such advances, technology is no panacea. Experts say siting wind farms is the most important consideration. “Some areas may be inappropriate for large-scale development because they have been recognized according to scientifically credible information as having high wildlife value,” warn the FWS guidelines. Such “inappropriate” locations would include National Audubon Society-designated Important Bird Areas, for example.

The next challenge for the industry and its supporters will be offshore wind farms. Thirteen miles from the coast of Rhode Island, the country’s first offshore wind farm was completed in 2016. More are on the way: Massachusetts, Rhode Island, Connecticut, New York, New Jersey and Maryland all have committed to developing more offshore wind energy, and federal officials have awarded leases to wind developers along the East Coast from Massachusetts to North Carolina.

As more wind turbines sprout, both on land and offshore, wildlife will remain vulnerable. The challenge is to ensure that this clean and renewable energy is harvested carefully, employing the best science and technology, so that golden eagles and other winged wildlife continue to rule the skies as they adapt to a changing climate.

Learn how NWF is helping make wind power safer for wildlife at blog.nwf.org/responsible-wind-power.