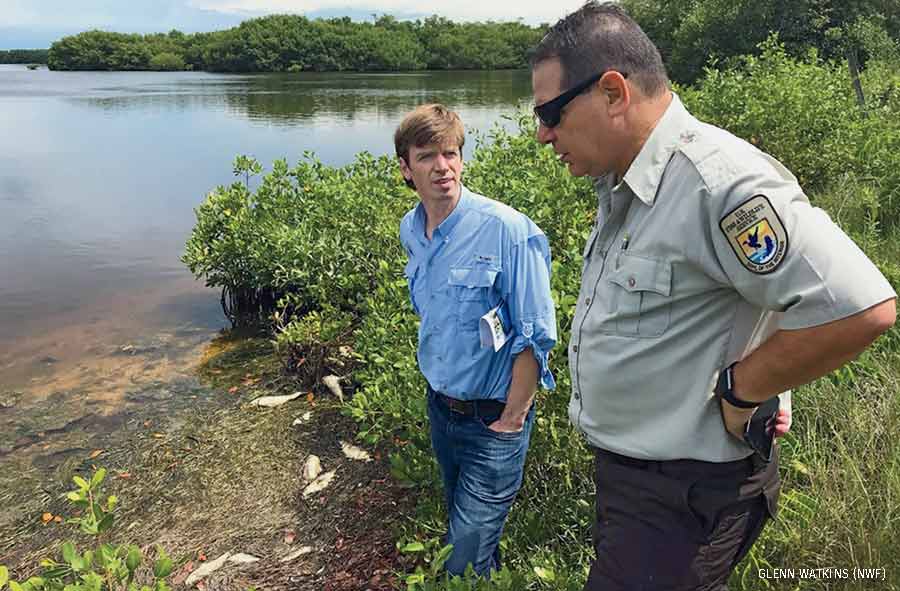 LAST SUMMER, southwest Florida suffered from two massive outbreaks of toxic algae that killed thousands of tons of marine life, including untold numbers of fish and hundreds of at-risk sea turtles and manatees. Dolphins, crabs and other creatures also died, and some people fell ill from related airborne toxins.

In late August, I saw the devastation first-hand. Blue-green algae as thick as guacamole choked the Caloosahatchee River near Fort Myers. The source of this toxic stew was far inland at Lake Okeechobee, where massive nutrient runoff from surrounding farms, septic tanks and developments pours into the lake, fertilizing waterborne algae. To prevent the lake from breaching its aging dike, that polluted water is funneled west through the Caloosahatchee and east through the St. Lucie River. These rivers feed into estuaries that are crucial for marine life—and for the state’s sport-fishing economy.

During the same August trip, I witnessed a second type of toxic algae, called a red tide, blooming out of control in coastal waters near the mouth of the Caloosahatchee. At the J.N. “Ding” Darling National Wildlife Refuge on nearby Sanibel Island, dead fish littered the shore. Though red tides are a natural seaborne phenomenon, many scientists believe that warming ocean waters combined with increasing polluted runoff is exacerbating these events.

Humans have contributed to these problems. Artificially channeling algae-filled water from Lake Okeechobee toward the coasts prevents that water from taking its natural course south, through the water-starved Everglades.

These are complex challenges, but commonsense solutions already exist. The National Wildlife Federation is working with multiple partners to secure federal funding for a reservoir that will store and treat polluted water from Lake Okeechobee before releasing it south to the Everglades, a major advancement that could help restore that priceless ecosystem.

To prevent toxic algal outbreaks, we must ensure strong clean-water safeguards. Yet as this magazine reaches you, the administration may have already proposed removing Clean Water Act protections for headwater streams and wetlands that are critical to curbing nutrient and sediment pollution. This is not a partisan issue, but addressing it will require more Americans to speak out. Please join our One Federation as we lead the charge to ensure clean water and healthy fish populations all across our nation.