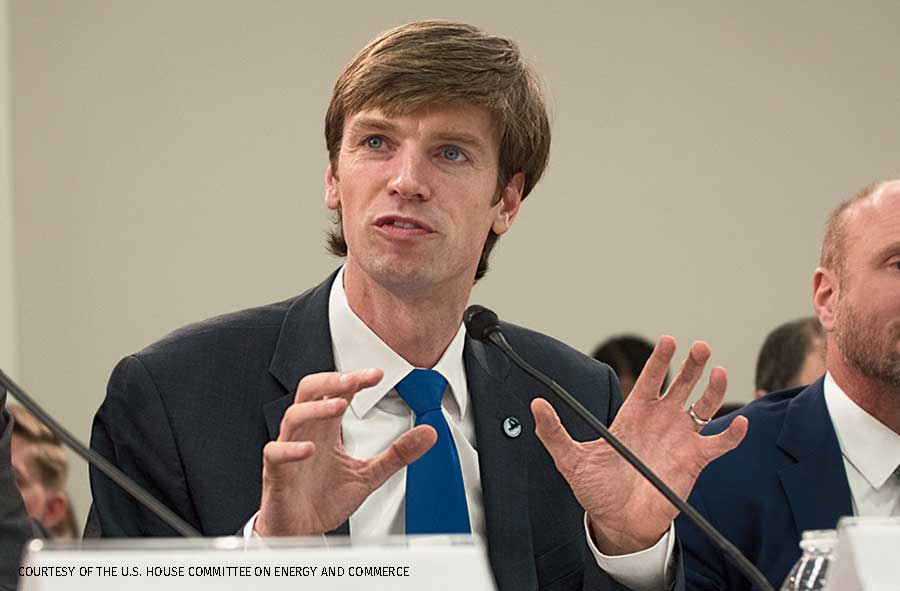 At a congressional hearing in June, NWF President and CEO Collin O’Mara promotes the use of cleaner, sustainable biofuels to benefit wildlife and habitats.

DURING THE PAST CENTURY, partnerships between government, conservation groups and other stakeholders have played a critical role in recovering wildlife populations as well as cleaning the air we breathe and the water we drink. But there also are many cases where government policies threaten our natural resources. In this issue, we describe two examples of how such policies can spawn damaging unintended consequences—and how the National Wildlife Federation is advancing innovative solutions.

This June, I testified before the U.S. House of Representatives on the urgent need to reform the Renewable Fuel Standard (RFS), which mandates that corn ethanol or soy biodiesel be blended into our fuels (see Breaking the Prairie). Intended to lower greenhouse gas emissions and increase demand for sustainable biofuels, the RFS failed to meet those goals—and has led to widespread habitat destruction, drinking water contamination, decreased wildlife populations and increased air pollution. Reforming the RFS is a key priority for the Federation. Fortunately, bipartisan, commonsense reforms are indeed possible, including reducing the volume of corn ethanol blended into the fuel supply, supporting more environmentally friendly, advanced biofuels, funding grassland restoration and enforcing legal protections that prevent habitat conversion to grow crops for biofuels.

The proposed construction of a continuous wall along the U.S.–Mexico border is another example of a policy that would have unintended wildlife impacts (see Up Against a Wall). From habitat destruction to fragmentation of species’ ranges and migratory corridors, the consequences of this project could harm hundreds of species, some of them, such as ocelots and jaguars, already endangered or threatened. As I learned firsthand from federal officials working at the border in Texas, there are more-effective technological solutions—including ground sensors, cameras, drones and radar—that would avoid negative wildlife impacts. We are working with members of Congress on both sides of the aisle to support such alternatives.

Today, one-third of all U.S. wildlife species are at risk or vulnerable to extinction. Confronting this crisis now—before it gets worse—is imperative. And while there’s much proactive work to be done, such as passing the Recovering America’s Wildlife Act, we must also have the courage to rethink government policies that continue to cause harm.