As the climate shifts, porcupines face a prickly future. 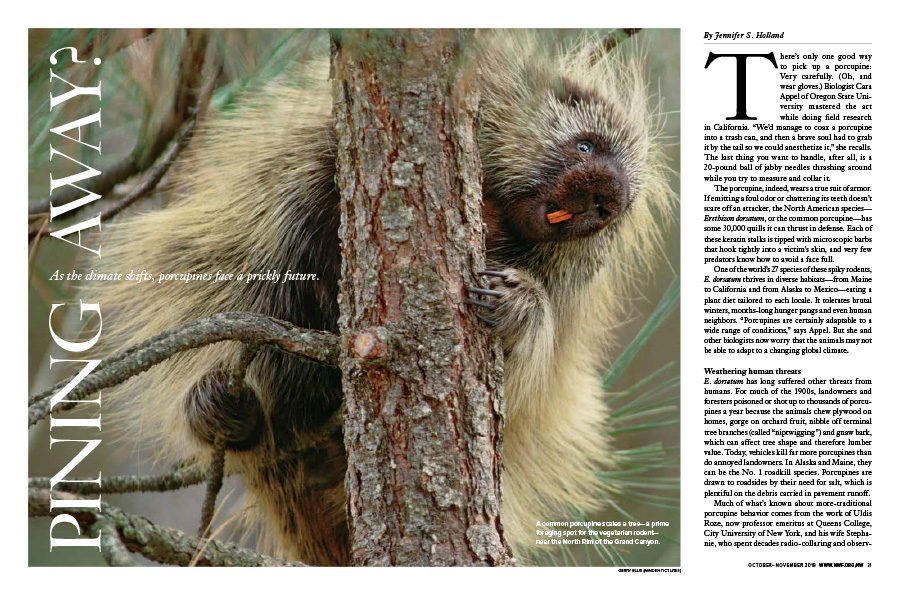 A common porcupine scales a tree—a prime foraging spot for the vegetarian rodent—near the North Rim of the Grand Canyon.

THERE’S ONLY ONE good way to pick up a porcupine: Very carefully. (Oh, and wear gloves.) Biologist Cara Appel of Oregon State University mastered the art while doing field research in California. “We’d manage to coax a porcupine into a trash can, and then a brave soul had to grab it by the tail so we could anesthetize it,” she recalls. The last thing you want to handle, after all, is a 20-pound ball of jabby needles thrashing around while you try to measure and collar it.

The porcupine, indeed, wears a true suit of armor. If emitting a foul odor or chattering its teeth doesn’t scare off an attacker, the North American species—Erethizon dorsatum, or the common porcupine—has some 30,000 quills it can thrust in defense. Each of these keratin stalks is tipped with microscopic barbs that hook tightly into a victim’s skin, and very few predators know how to avoid a face full.

One of the world’s 27 species of these spiky rodents, E. dorsatum thrives in diverse habitats—from Maine to California and from Alaska to Mexico—eating a plant diet tailored to each locale. It tolerates brutal winters, months-long hunger pangs and even human neighbors. “Porcupines are certainly adaptable to a wide range of conditions,” says Appel. But she and other biologists now worry that the animals may not be able to adapt to a changing global climate. 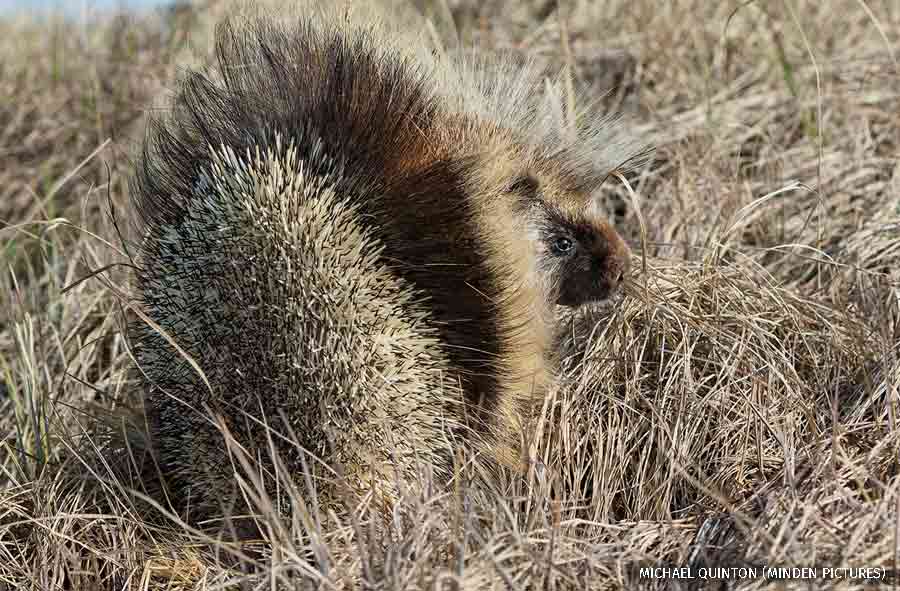 Quills at the ready, a common porcupine (above) assumes a defensive posture in Alaska. A close-up of the quills (below) hints at their deadly secret: Each keratin stalk is tipped with microscopic barbs that hook tightly to a victim’s skin—a powerful predator deterrent.

E. dorsatum has long suffered other threats from humans. For much of the 1900s, landowners and foresters poisoned or shot up to thousands of porcupines a year because the animals chew plywood on homes, gorge on orchard fruit, nibble off terminal tree branches (called “niptwigging”) and gnaw bark, which can affect tree shape and therefore lumber value. Today, vehicles kill far more porcupines than do annoyed landowners. In Alaska and Maine, they can be the No. 1 roadkill species. Porcupines are drawn to roadsides by their need for salt, which is plentiful on the debris carried in pavement runoff.

Much of what’s known about more-traditional porcupine behavior comes from the work of Uldis Roze, now professor emeritus at Queens College, City University of New York, and his wife Stephanie, who spent decades radio-collaring and observing porcupines on their 70 acres of land in the Catskill Mountains. Their research helped reveal the animals’ seasonal, mostly nocturnal, foraging activities up in the trees. In spring and summer, for example, porcupines harvest leaves and fruits. In fall, they go for acorns and other mast crops, and in winter, they turn to pine needles and bark.

One surprising finding: Porcupines periodically fall out of trees, sometimes getting impaled on their own quills. But the animals have adapted to survive these stab wounds. Roze and a colleague discovered that porcupine quills are coated in an antibacterial substance that fends off infection. That’s been helpful to the researchers, too: “I’ve been quilled hundreds of times,” Roze says, “and I’ve never had a problem.” 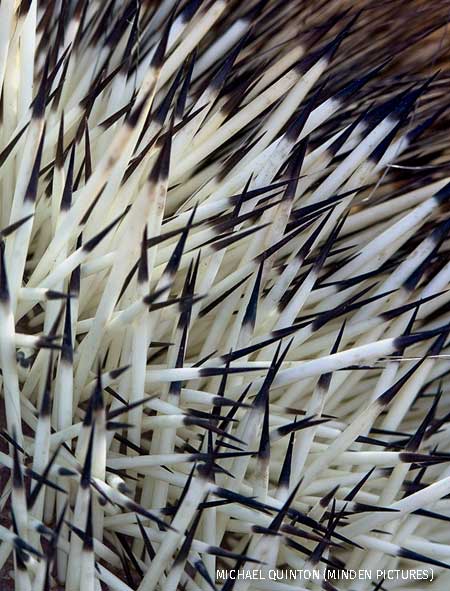 This adaptation also comes in handy at mating time, when males track fertile females by scent during a brief receptive period in fall, and suitors then battle for access. It’s a noisy time of year. “You’ll often hear them on the warpath,” Roze says. “The sirenlike screams between competing males is a hallmark of fall in the woods.”

The “winner” of such competitions sprays a female with urine to send her into estrus. If she’s not interested, she screams at him, shakes off the urine and runs away—possibly tail swiping him on her way out. A willing female, on the other hand, curls her spiked tail out of the way and lays her quills flat to protect the male as he mounts her (though, no doubt, accidents happen). After multiple mating sessions, the male plods off to sniff out another partner; the impregnated female gives birth to a single offspring, called a porcupette, about seven months later.

Despite this long gestation time and slow reproductive rate—along with threats from humans—North America’s porcupines are considered “stable” and a species “of least concern” by the International Union for Conservation of Nature (IUCN). But there are signs of future trouble. In Wisconsin’s Sandhill Wildlife Area, for example, University of Wisconsin–Madison ecologist Jonathan Pauli and his colleagues have been studying one porcupine population for more than 25 years. The rodents here share their habitat with fishers, small carnivores in the weasel family that are among the very few predators that can prey on porcupines without injury. “They’ll repeatedly bite the animal’s face to injure it,” Pauli explains, “and then flip it over and eat it from belly to spine,” leaving behind the prickly pelt. Pauli and his graduate student John Pokallus, now with the Wyoming Game and Fish Department, discovered that the risk of being eaten by a fisher is a more powerful driver of porcupine movements than is hunger: No matter how nutritionally stressed the animals become, if they detect fishers in an area they will stay in their dens or travel only short distances to find food.

This stress is compounded by Wisconsin’s harsh winters, a slog for which they prepare by stuffing themselves in the warmer months. “The fatter they get, the better,” Pauli says. “They go through true starvation in winter,” eating bark and pine needles, relying—not always successfully—on summertime fat to get them through.

Notwithstanding these challenges, Sandhill’s porcupine population had suffered no significant drops (only natural fluctuations) during the period Pauli has studied it—until now. Today, he says, the rodents are declining. Pauli blames the impact of climate change on snowshoe hares, which turn from brown to white in winter, camouflage that protects them from predators such as fishers. As winters become shorter and less snowy, however, this adaptation is no longer effective, and white rabbits increasingly end up on a brown landscape, making them easy prey. Surviving hares, meanwhile, are shifting their range northward to colder, snowier habitat. “Without a superabundant hare to gobble up,” Pauli says, “predators now focus on porcupines, especially on porcupettes,” which possess just splinter-thin quills to protect them. 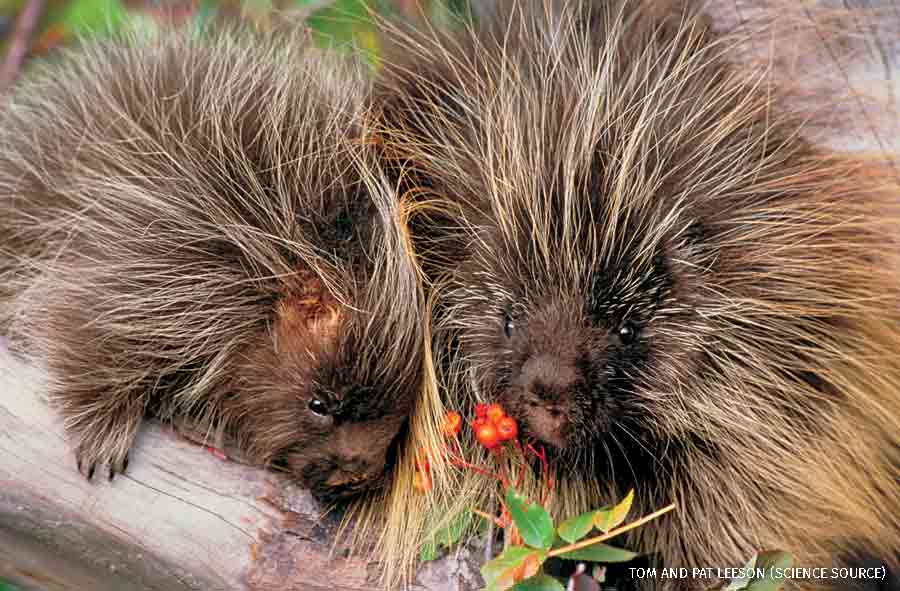 A mother porcupine tends to her offspring, or porcupette, on private property in the Rocky Mountains. Unusual among rodents, porcupines have a low reproductive rate (one offspring annually) and long gestation period (seven months), making them vulnerable to human threats. Already, scientists see signs that these ordinarily flexible animals may not be able to adapt to a changing climate.

“Enrichers of the forest”

More than 2,000 miles west, Appel’s research on California porcupines, which inhabit a coastal dune ecosystem just south of the Oregon border, suggests trouble for the species as well. During the past five years, she says, the region has faced a series of long summer droughts, which reduce forage, followed by extremely wet winters—a combination that leaves porcupines undernourished and vulnerable. The animals, which already lose up to 40 percent of their body mass in winter, have been hit hard. “The dead porcupines we recovered in winter had virtually no body fat left,” Appel says. “If droughts become more common and rainfall cycles continue to be thrown out of whack”—a scenario predicted by many climate models—“porcupines may not persist in parts of California for much longer,” she says.

That could be bad news for the ecosystems the animals inhabit. According to Roze, porcupines are beneficial to forests. “Their niptwigging [behavior], for example, creates ground open to sunlight—allowing in more plants and bringing in other animals like birds that need openings.” Rather than prickly rodents screaming in the woods, he says, “I see porcupines as enrichers of the forest, of the animal kingdom, and even of our lives.”