Conservationists are fighting to help this elusive forest dweller survive, even in a landscape peppered with dying trees and poison 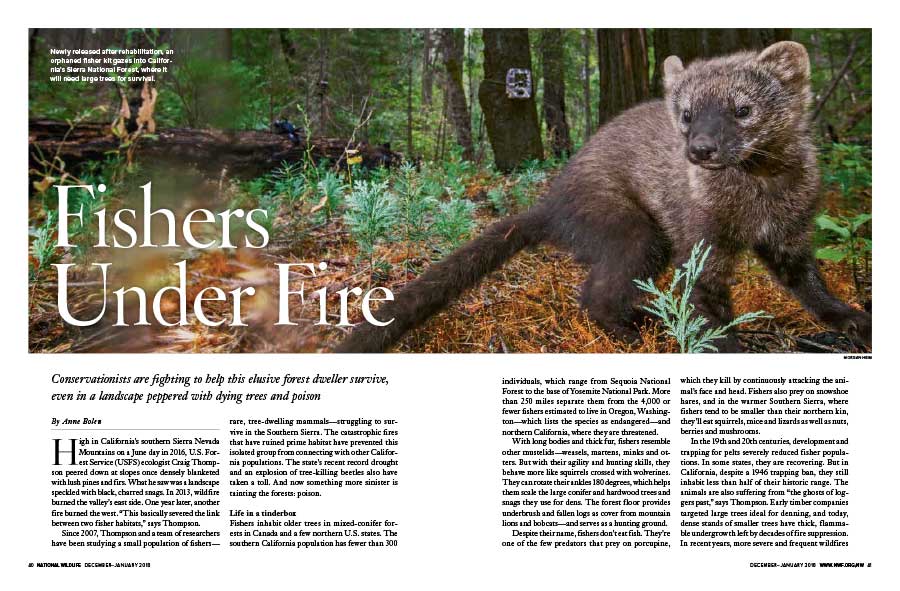 Newly released after rehabilitation, an orphaned fisher kit gazes into California’s Sierra National Forest, where it will need large trees for survival. One of many wildfires that have devastated fisher habitat, the 2013 Rim Fire (below) consumed more than 250,000 acres in California.

HIGH IN CALIFORNIA’S southern Sierra Nevada Mountains on a June day in 2016, U.S. Forest Service (USFS) ecologist Craig Thompson peered down at slopes once densely blanketed with lush pines and firs. What he saw was a landscape speckled with black, charred snags. In 2013, wildfire burned the valley’s east side. One year later, another fire burned the west. “This basically severed the link between two fisher habitats,” says Thompson.

Since 2007, Thompson and a team of researchers have been studying a small population of fishers—rare, tree-dwelling mammals—struggling to survive in the Southern Sierra. The catastrophic fires that have ruined prime habitat have prevented this isolated group from connecting with other California populations. The state’s recent record drought and an explosion of tree-killing beetles also have taken a toll. And now something more sinister is tainting the forests: poison. 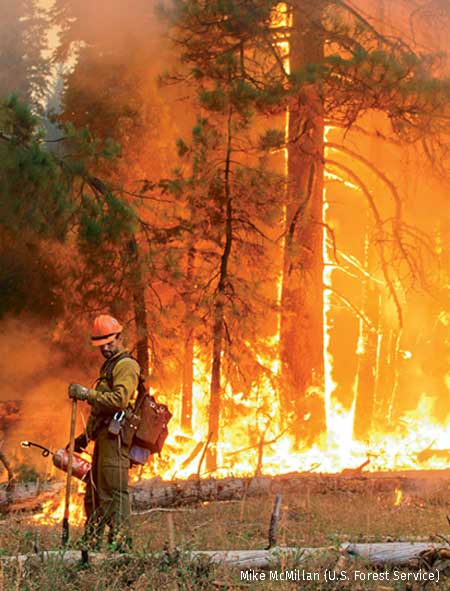 Life in a tinderbox

Fishers inhabit older trees in mixed-conifer forests in Canada and a few northern U.S. states. The southern California population has fewer than 300 individuals, which range from Sequoia National Forest to the base of Yosemite National Park. More than 250 miles separate them from the 4,000 or fewer fishers estimated to live in Oregon, Washington—which lists the species as endangered—and northern California, where they are threatened.

With long bodies and thick fur, fishers resemble other mustelids—weasels, martens, minks and otters. But with their agility and hunting skills, they behave more like squirrels crossed with wolverines. They can rotate their ankles 180 degrees, which helps them scale the large conifer and hardwood trees and snags they use for dens. The forest floor provides underbrush and fallen logs as cover from mountain lions and bobcats—and serves as a hunting ground.

Despite their name, fishers don’t eat fish. They’re one of the few predators that prey on porcupine, which they kill by continuously attacking the animal’s face and head. Fishers also prey on snowshoe hares, and in the warmer Southern Sierra, where fishers tend to be smaller than their northern kin, they’ll eat squirrels, mice and lizards as well as nuts, berries and mushrooms.

In the 19th and 20th centuries, development and trapping for pelts severely reduced fisher populations. In some states, they are recovering. But in California, despite a 1946 trapping ban, they still inhabit less than half of their historic range. The animals are also suffering from “the ghosts of loggers past,” says Thompson. Early timber companies targeted large trees ideal for denning, and today, dense stands of smaller trees have thick, flammable undergrowth left by decades of fire suppression. In recent years, more severe and frequent wildfires have burned tens of thousands of acres of prime fisher habitat in California alone.

Voracious bark and engraver beetles have dealt California’s forests another blow, leaving mountainsides covered with swaths of reddish-brown pines and firs—what Carolyn Ballard, Sierra National Forest’s chief fire strategist, calls the “red and dead.” Healthy trees can produce enough sap to expel the beetles, but California’s record drought from 2011 to 2016 weakened trees, leading to the death of more than 102 million of them. Their flammable needles now litter the Sierra Nevada landscape. “The whole forest has changed,” says Ballard. “Small animals that rely on pine cones are going to have a hard time,” which also means less prey for fishers, adds USFS Wildlife Biologist Kathryn Purcell—bad news for a population already struggling to expand. 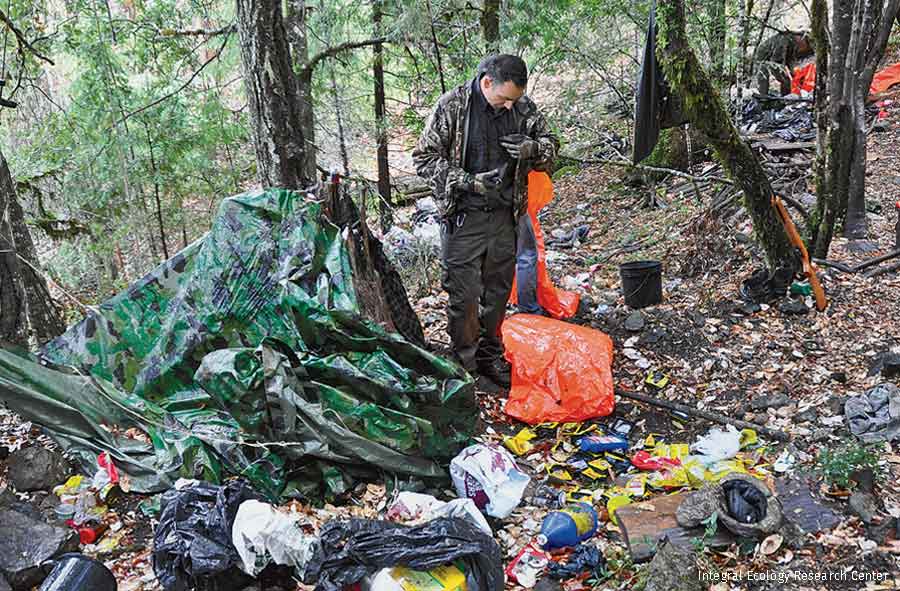 In that state’s Six Rivers National Forest, ecologist Mourad Gabriel investigates one of hundreds of illegal marijuana grows that pollute public forests with trash and pesticides that poison wildlife.

When the hunter is hunted

To keep insects and animals from chewing plants and irrigation lines, growers spray them with toxicants. These include rodenticides that cause animals to bleed to death internally, and carbofuran, a pesticide banned in the United States. Thompson has seen drinking bottles full of the bubblegum-pink liquid strewn about the sites. “The thought of some kid drinking this stuff gives me nightmares,” he says.

Ecologist Mourad Gabriel first learned growers were deliberately targeting wildlife in 2013, when he found hot dogs laced with carbofuran strung along a trespass grow, “a clear case of malicious poisoning.” Gabriel and Greta Wengert of the Integral Ecology Research Center have been on more than 200 raids and seen cans of poisoned tuna and dog food as well as carcasses of mule deer, bears, coyotes and other wildlife covered with dead vultures and flies. “We found a dead fox not 20 meters away from dog food tainted pink with carbofuran,” says Wengert.

Even limited exposure to toxicants could weaken fishers, says Thompson, making them more susceptible to predation by bobcats and mountain lions, which in turn can be poisoned. Fisher mothers also transmit the chemicals to kits through their milk, a particular concern in the Southern Sierra. By photographing denning trees with camera traps, USFS ecologist Rebecca Green found that females in the area generally have one to two kits per litter a year, whereas fishers elsewhere can have up to four.

Yet solving the poison problem is daunting. Investigators found 247 illegal grow sites in California’s national forests in 2016 alone, and locating, raiding and cleaning just one site can cost as much as $80,000, Frick says. “The damages to the environment, the water, our public resources—it’s tragic.” 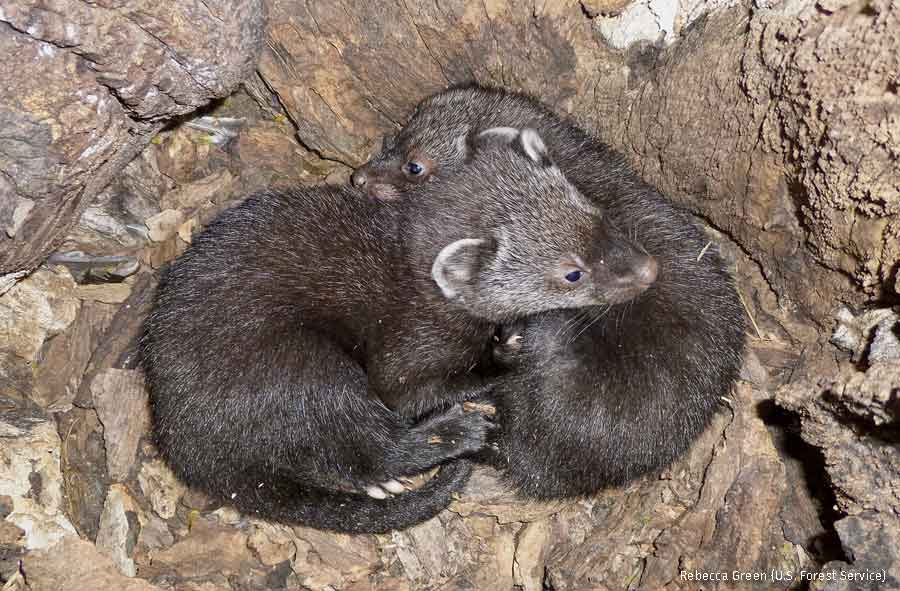 Fisher kits, just about 10 weeks old, curl safely in their den. In recent years, U.S. Forest Service researchers have found orphaned or dead kits whose mothers have been killed by predators or poisons, which mothers can pass to nursing kits in tainted milk. But efforts to protect these rare animals and their forest habitat offer a glimmer of hope.

Hope on the horizon?

The National Wildlife Federation is spreading the word about how rodenticides and other pesticides harm fishers and other wildlife. “Californians want to know this unique animal is thriving in our forests,” says Beth Pratt-Bergstrom, NWF’s California regional executive director. And since 2007, NWF’s Washington affiliate, Conservation Northwest, has collaborated with trappers from Canadian First Nations and provincial, federal and state wildlife agencies to relocate 159 fishers from British Columbia to Washington’s Cascades and Olympic Peninsula. They plan to relocate 80 more.

The USFS research team has observed Southern Sierra fishers potentially adapting by using more fire- and drought-resistant black oaks for dens. The researchers also are identifying the preferred type of denning tree to prevent them from being logged and determining how much underbrush should be preserved for cover. And 14 orphaned kits have been rescued; five were rehabilitated and released.

Yet until California’s forests recover, the fishers’ options to expand their range are limited. This past year, dogs searching a burned valley found a few fisher scats in less severely burned areas. However, “it may be quite a while before the animals reestablish a home range here,” says Purcell. Indeed, given the many threats to the Southern Sierra fisher, the future of this intriguing animal is “in play right now,” says Thompson. “We haven’t seen how this will end.”