Too Much Wiggle Room

Invasive earthworms are spreading across the planet—transforming soils, gardens, forests and entire ecosystems in ways that may make you squirm. 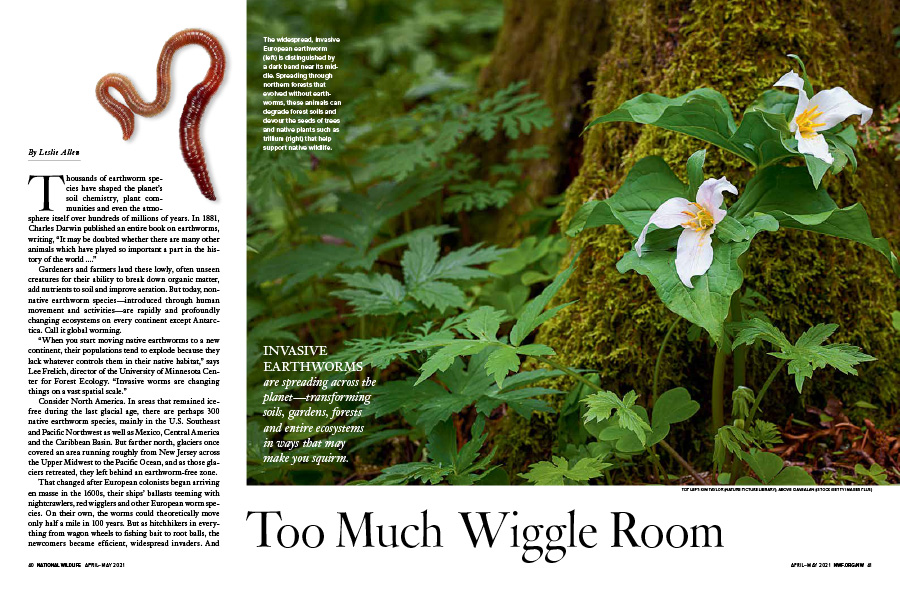 The widespread, invasive European earthworm (left) is distinguished by a dark band near its middle. Spreading through northern forests that evolved without earthworms, these animals can degrade forest soils and devour the seeds of trees and native plants such as trillium (right) that help support native wildlife. Photos by Kim Taylor/NPL (left) and DaveAlan/iStock/Getty Images Plus (right).

THOUSANDS OF EARTHWORM SPECIES have shaped the planet’s soil chemistry, plant communities and even the atmosphere itself over hundreds of millions of years. In 1881, Charles Darwin published an entire book on earthworms, writing, “It may be doubted whether there are many other animals which have played so important a part in the history of the world ....”

Gardeners and farmers laud these lowly, often unseen creatures for their ability to break down organic matter, add nutrients to soil and improve aeration. But today, nonnative earthworm species—introduced through human movement and activities—are rapidly and profoundly changing ecosystems on every continent except Antarctica. Call it global worming.

“When you start moving native earthworms to a new continent, their populations tend to explode because they lack whatever controls them in their native habitat,” says Lee Frelich, director of the University of Minnesota Center for Forest Ecology. “Invasive worms are changing things on a vast spatial scale.”

Consider North America. In areas that remained ice-free during the last glacial age, there are perhaps 300 native earthworm species, mainly in the U.S. Southeast and Pacific Northwest as well as Mexico, Central America and the Caribbean Basin. But farther north, glaciers once covered an area running roughly from New Jersey across the Upper Midwest to the Pacific Ocean, and as those glaciers retreated, they left behind an earthworm-free zone.

That changed after European colonists began arriving en masse in the 1600s, their ships’ ballasts teeming with nightcrawlers, red wigglers and other European worm species. On their own, the worms could theoretically move only half a mile in 100 years. But as hitchhikers in everything from wagon wheels to fishing bait to root balls, the newcomers became efficient, widespread invaders. And in northern hardwood forests and other natural environments that evolved without them, earthworms became a slow-moving disaster.

Researchers identified a lush patch of forest floor in Wisconsin's Nicolet National Forest as a spot not yet invaded by earthworms and only lightly browsed by deer.

The havoc of unseen invaders

The problem starts with the worms’ diet: the forest’s moisture-rich leaf litter, or duff layer. “If you ever walk through a wood that has no earthworms, you almost bounce on this spongy layer that’s critical for everything from overwintering organisms to the first flush of plants in the spring,” says ecologist Brad Herrick of the University of Wisconsin–Madison Arboretum. “But with earthworms, you’re left with a thin, hard layer of topsoil or just mineral soil.” Water enters this bare soil differently and erodes it more readily, which changes nutrient cycling and microbial communities. The soil also becomes warmer and drier.

Ecologists describe these intertwining changes as cascade complexes. As earthworms consume leaf litter, they also eat the seeds and seedlings of trees such as sugar maples along with many slow-growing native plants such as trilliums, lady’s slippers and orchids, amplifying the negative effects of deer browsing. Grasses and invasive plants, including some that coevolved with earthworms in Europe, move in. Such habitat changes can harm wildlife species that have adapted to a certain mix of plants in the habitat that they’ve lived in for thousands of years.

As native plants dwindle, so does the number of insects and other creatures on the forest floor, reducing the amount of food for animals such as woodland salamanders. Ground-nesting birds such as hermit thrushes and ovenbirds also become scarcer and more vulnerable to predators. “Earthworm invasions make nests more visible to predators,” says ecologist Scott Loss of Oklahoma State University, who has studied these bird species in Wisconsin and Minnesota. “Worms are affecting both the birds’ numbers and nesting success.”

One of the most worrying aspects of earthworm invasions is their interaction with climate change. Spread by oil and gas development, fishing, logging and other human activities—and better able to thrive as soils warm—European earthworms are invading the northern boreal forest. In Alaska’s Kenai National Wildlife Refuge, for example, researchers from the University of Minnesota have found areas where the biomass of earthworms is hundreds of times higher than that of moose, a keystone species.

The boreal forest’s rich leaf litter, often a foot deep, is a vast carbon sponge, and as earthworms munch their way through it, they breathe out planet-warming carbon dioxide. Scientists think that eventually the worms may begin to resequester that carbon deep in the soil, but that would take a very long time. “They are releasing a huge pulse of CO2,” says Frelich, “and it might take a century to take that back out of the atmosphere.” Researchers are also starting to observe earthworms eating their way through the far-northern tundra, threatening to expose permafrost and accelerate its thawing—and carbon release—in a warming world.

Another area of Wisconsin forest (above) shows the destruction of invasive earthworms, which deplete the soil and eat the seeds of native plants. The resulting sparse foliage exposes ground-nesting birds such as the hermit thrush (below) to predators.

Growing by leaps and bounds

As scientists race to understand the cascading effects of European earthworms, a different group of worms is setting off alarms. Three species of earthworms from the genera Amynthas and Metaphire, which first arrived in California from their native Japan and Korea in the 1860s, have now become “a second wave,” says Herrick. Collectively called jumping worms or crazy snake worms because of their notorious thrashing, they started invading northeastern and midwestern states about 15 years ago. Now, more than 40 percent of residential gardens surveyed in Madison, Wisconsin, have jumping worms, according to a new study by biologist Carly Ziter of Concordia University and colleagues. The team found as many as 220 jumping worms wriggling in a single square meter of Madison’s urban woodland. 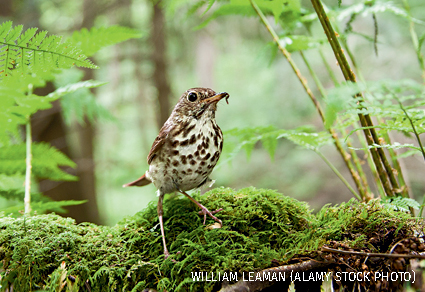 Jumping worms are voracious consumers of both leaves and soil, and evidence suggests that they rapidly displace the smaller, less-aggressive European worm species. And although the adults die within a year—while European earthworms can live for five to 10 years—jumping worms’ tiny, cold-hardy cocoons can survive for years. “These worms are particularly well-suited to inhabiting environments like potting soil and compost, moving with them wherever these materials go,” says U.S. Forest Service ecologist Mac Callaham, who found jumping worms in the roots of a blueberry bush he planted in his own yard in Georgia.

Heat may be one promising weapon against jumping worms. In the lab, Herrick and his team found that heating earthworm cocoons to at least 104 degrees F for three days killed all the cocoons. Callaham believes prescribed fire can help control invasions in parts of affected forests in the Great Smoky Mountains and elsewhere. His team’s experiments have shown that fire kills off the worms, their cocoons and their food source, “a triple whammy for litter-dwelling worms.” But he is quick to tap the brakes on expectations, since public safety limits the size and area for fire, and tree species limit the forest types where fire can be used. Where it can be, fire must be applied repeatedly and often, says Callaham, who is studying its effectiveness on the greater landscape.

How to fight the invasion 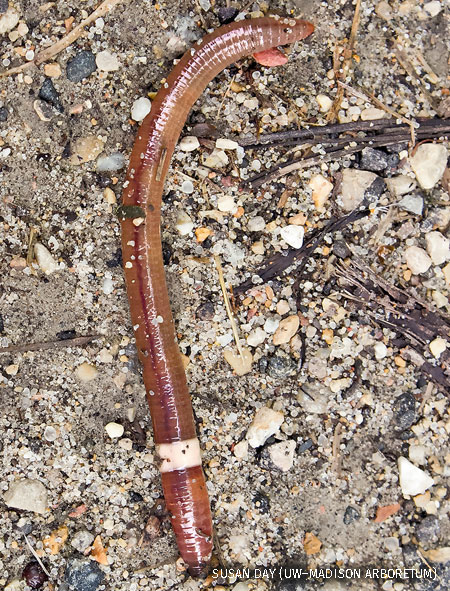 Many gardeners welcome European earthworms, which can aerate and enrich soil. But fast-spreading, invasive jumping worms—distinguished by a white band near the head (pictured) and wild, thrashing behavior when disturbed—can turn garden soil into a sterile heap of loose pellets that don’t absorb water efficiently or support a diverse microbial community. Getting rid of these jumpers can be tough, but here are some steps that may help.

Prevent the influx. Jumping worms feast on root balls, so when you buy new plants, consider rinsing the dirt off the roots before planting. The worms’ cocoons can live in compost or mulch for years, so some gardeners avoid buying these products commercially.

Don’t spread the problem. If you find jumping worms in your garden, keep them ‘socially distant’ from your community by putting your yard debris in a corner of your lot rather than sending it to municipal composting. Don’t trade plants with neighbors. Clean your garden tools before taking them to a community plot, clean your shoes before hiking in forests and never dump bait worms into the water or on the ground; they belong in the trash.

Natural repellents. Scientists are researching natural substances that may help control earthworms, especially a natural surfactant called saponin. Research has focused on saponins that occur in the production of tea oil. Home gardeners could try spraying a very weak solution of natural soap, which also contains saponins. However, residual effects on nontarget species remain a big question, and saponins should never be applied near ponds or streams.