Decline of an Ancient Mariner 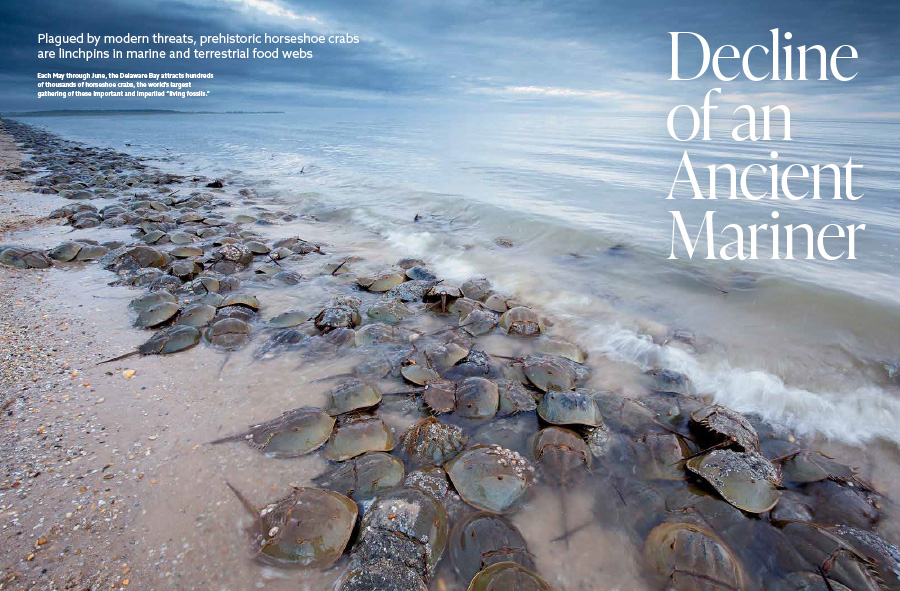 Each May through June, the Delaware Bay attracts hundreds of thousands of horseshoe crabs, the world's largest gathering of these important and imperiled "living fossils." (Photo by Ariane Müller)

BATHED IN BRIGHT LIGHT FROM A FULL MOON, the scene just before midnight on Delaware’s Slaughter Beach came quickly into focus: Hundreds of living things—each resembling a rusty, half-buried Army helmet—swarmed at the water’s edge. The larger, platter-sized animals were female horseshoe crabs, said biologist Elliott Workman, who has studied the odd creatures for more than four decades. Flanked by clusters of smaller males, each female deposited thousands of eggs in the wet sand while males used their “boxing glove” pincers in frenzied attempts to latch onto her, trying to fertilize as many eggs as possible.

As land and biodiversity coordinator for the Delaware Nature Society, a National Wildlife Federation affiliate, Workman oversees the society’s annual surveys of horseshoe crabs on Slaughter Beach during their May-June spawning season. Conducted six times monthly on more than 20 Delaware Bay beaches in Delaware and New Jersey, the surveys coincide with peak spawning activity, which occurs at high tide on nights with new or full moons.

Beyond counting crabs that late May night in 2021, Workman and his companions also were privileged witnesses to a natural spectacle performed for nearly half a billion years by creatures older than the dinosaurs. Based on fossil records, horseshoe crabs—which are not actually crabs but arthropods more closely related to spiders—began roaming the Earth’s ocean floors at least 450 million years ago. During that time, the animals, which have changed very little, have thrived through countless global upheavals, from multiple ice ages to five major extinction events.

Yet today, many conservationists fear the crabs may be no match for a relative newcomer to the tree of life: Homo sapiens. For hundreds of years, humans have been contaminating the animals’ marine habitats, destroying their spawning beaches, even grinding them up to feed hogs and fertilize local crops. In recent decades, we’ve also turned the horseshoe crab into a global commodity sought by commercial fishermen, who use the animals to bait eel and whelk traps, and the biomedical industry, which uses extracts from the animals’ blood to screen surgical implants, injectable drugs and vaccines (including COVID-19 vaccines) for bacterial contamination.

The cumulative impact is obvious to longtime observers such as Workman. “Forty or 50 years ago,” he says, “there were so many horseshoe crabs that you couldn’t even walk on Slaughter Beach.”

Also obvious, at least to scientists, has been a decrease in the number of eggs the crabs leave behind on spawning beaches—along with a simultaneous crash of shorebird populations that rely on those eggs to fuel springtime migrations to the Arctic. In an analysis recently published in the journal Aquatic Conservation: Marine and Freshwater Ecosystems, biologist Larry Niles of Wildlife Restoration Partnerships and his colleagues summarize four decades of egg-abundance data from New Jersey spawning beaches. They report that egg numbers have fallen by more than 90 percent since the 1980s. 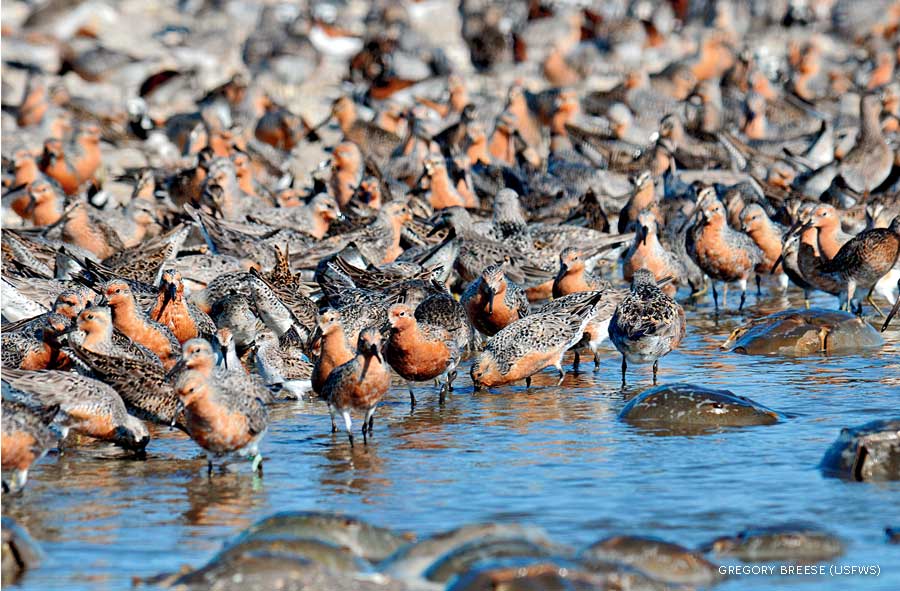 During that same period, he says, long-running surveys of shorebirds that stop to rest and refuel along Delaware Bay in spring show that the birds’ numbers fell from an estimated 1.5 million in the 1980s to about 200,000 today. “Shorebirds are among the fastest-declining groups of birds, and the fastest-declining shorebirds are species that migrate through Delaware Bay and depend on the eggs of horseshoe crabs,” Niles says.

It was shorebird scientists who first sounded the alarm about horseshoe crabs in the early 1990s, when a then-new fishery for eel and whelk took off and began using the crabs as bait. “All of a sudden, trucks with out-of-state plates started backing up to our beaches,” recalls Niles. Between 1992 and 1997, the bay’s horseshoe crab harvest shot up from fewer than 100,000 to more than 2.5 million crabs a year. Niles and his colleagues knew these larger harvests would spell trouble for birds that need crab eggs to survive long migrations and breed successfully. “Horseshoe crab eggs are like a superfood,” explains David Mizrahi, vice president of research and monitoring for NWF affiliate New Jersey Audubon and a biologist who has studied migratory semipalmated sandpipers for nearly 30 years. “They’re easy to find, easy to digest, and they’re filled with fat, which is exactly what migratory birds need.” And the birds need a lot of them, devouring thousands of eggs on a typical day.

Mizrahi and Niles have seen the greatest declines among shorebird species that migrate the farthest and depend most heavily on Delaware Bay as a stopover: the semipalmated sandpiper, ruddy turnstone and a unique subspecies of red knot, Calidris canutus rufa. To get to the Arctic and successfully breed and raise their chicks after they arrive, all three species must consume enough horseshoe crab eggs to double their weight in just two weeks.

Conservationists worry particularly about the red knot, the bay’s flagship shorebird named for its rusty breast during the breeding season. Most of the Western Hemisphere’s rufa red knots migrate nearly 20,000 miles a year—from the southern tip of South America to the Arctic and back—one of the longest annual journeys of any migratory bird.

Sadly, the number of red knots tallied along the bay’s shores has plummeted from 94,000 in 1989 to just over 12,000 in the latest surveys in 2022. Counts from the birds’ wintering grounds (which can be better indicators than counts at stopovers, where birds are coming and going) confirm the bad news: Aerial surveys conducted in Patagonia and Tierra del Fuego in the mid-1980s by the Canadian Wildlife Service recorded nearly 68,000 red knots. When the same biologists surveyed the same regions in 2012, they found only about 15,000. Since then, the number has continued to decline. In 2014, the rufa red knot was listed as threatened under the Endangered Species Act.

In response to concerns about the red knot, in 2013, the Atlantic States Marine Fisheries Commission (ASMFC), a regional regulatory body, restricted the bay’s horseshoe crab bait harvests to male crabs only and set an annual harvest quota of no more than 500,000 Delaware Bay crabs. Yet despite a decade of these restrictions, the bay’s horseshoe crab population—based on trawl samples gathered each fall at the mouth of the bay and reported to ASMFC—has not significantly increased. 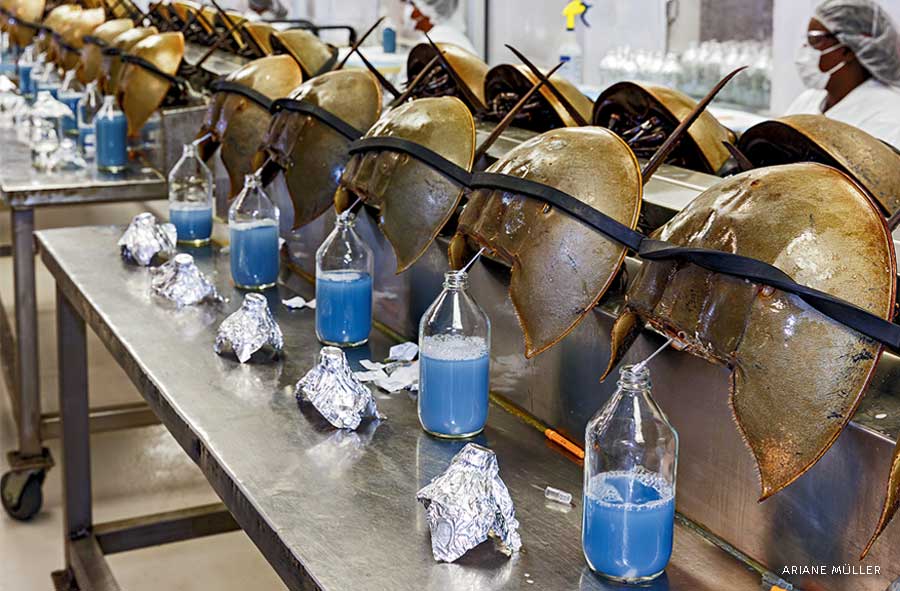 At Charles River Laboratories in South Carolina, horseshoe crabs are drained of about a third of their blue blood—used to test vaccines and other medical products for contaminants.

“What this tells me,” Mizrahi says, “is that the crab population may have stabilized, but it has not recovered, which is what we need for the birds to recover.” He cites two likely reasons. One is the unquantified, yet inarguably significant, number of crabs killed as bycatch by flounder, scallop and other fisheries. The other is the number of crabs killed by the biomedical industry—a figure that remains murky because the companies are not required to make their data public.

Biomedical companies value the horseshoe crab for its unusual blood. In contrast to the blood of humans and most other animals, oxygen is transported through the crab’s blood not by iron-containing hemoglobin but by a copper-containing protein that turns the blood milky blue. In the 1950s, scientists discovered that a substance within this blood—called Limulus amebocyte lysate, or LAL—rapidly clots in the presence of bacterial toxins. Since the late 1970s, the pharmaceutical industry has used LAL to screen for potentially dangerous toxins in virtually all products made to be injected or implanted into a human body.

As such products have proliferated, the demand for horseshoe crabs by the industry has more than doubled during the past two decades—totaling 697,025 crabs collected and shipped to specialized “bleeding” facilities on the U.S. East Coast in 2020 alone, according to data reported to ASMFC. The majority of these animals are taken from Delaware Bay.

Although the companies are supposed to release all horseshoe crabs unharmed—after draining about a third of each animal’s blood—“we suspect they’re killing more crabs than they own up to,” says Niles, “and nobody is allowed to see their data.” One peer-reviewed study estimated mortality at up to 30 percent. “That would be more than 200,000 crabs,” Mizrahi says. “And the number that survive after release also is unknown, as is whether horseshoe crabs that are bled have altered behavior” such as difficulty navigating or spawning.

Fortunately, two decades ago, scientists developed a synthetic alternative to LAL—recombinant Factor C, or rFC—that several published studies conclude is just as effective as the blood-based product. Yet while rFC has been approved as an LAL alternative in dozens of other countries, including China and members of the European Union, the U.S. pharmaceutical industry has dragged its feet. Just one U.S. company, Eli Lilly, has fully embraced the synthetic, bringing four drugs tested with rFC to market so far. 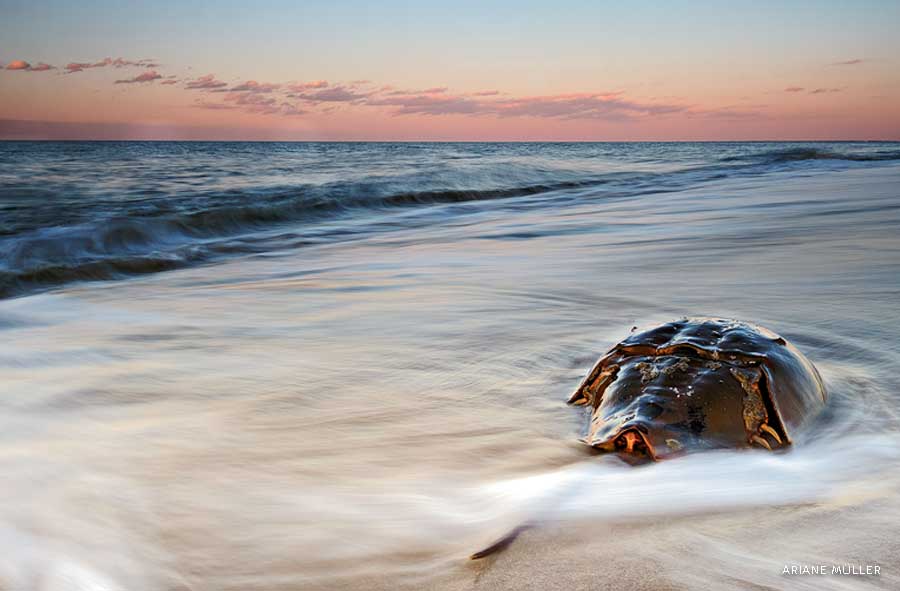 Looking much like its ancestors did millions of years ago, a lone horseshoe crab spawns at sunrise on Bowers Beach in Delaware (above). A female horseshoe crab will lay tens of thousands of eggs (below) during the spawning season, supplying nutritious and abundant food for fish, sea turtles, shorebirds and other wildlife. The animals have survived five major extinction events.

Recovering a species—and an ecosystem

To encourage drug companies to switch to rFC—and reduce crab deaths from all other sources—48 organizations, including NWF, now work together through the Horseshoe Crab Recovery Coalition. Its goal is “to restore horseshoe crabs so they can support the wildlife and ecosystems that depended on them for millennia,” says coalition steering committee member Zach Cockrum, NWF’s senior director of ocean sustainability. The crab’s recovery could occur in time to help many other species that rely on it, says fellow committee member Mizrahi, who cites research published in Environmental and Resource Economics projecting both a horseshoe crab recovery and a rebound in red knot numbers following a 12-year moratorium on crab bait harvests. 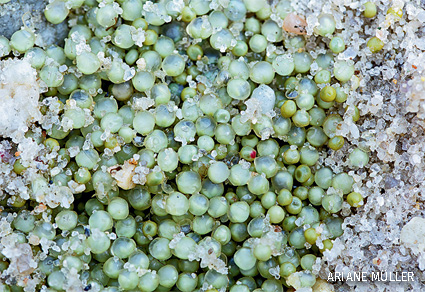 According to Niles, who has lived much of his life along Delaware Bay, the benefits of recovering horseshoe crabs to their historic numbers would resonate beyond the shorebirds and other wildlife that rely on the animals’ gift of abundant eggs. The bay’s once-famed productivity—including sport fisheries nurtured by crab eggs—also supported thriving businesses and communities that have largely faded away, he says. “Walk up to a marina or boat captain today, and they’ll tell you there are no fish.”

But Niles has not lost hope. With most Delaware Bay shorelines publicly owned and habitat restoration at an all-time high, he believes that even a temporary moratorium on killing horseshoe crabs “could bring this ecosystem right back to what it once was.”

National Wildlife Federation affiliates Delaware Nature Society and New Jersey Audubon have long worked to protect horseshoe crabs by engaging in research, education and advocacy. At the Federation’s June 2021 annual meeting, New Jersey Audubon proposed a resolution calling for increased protection for horseshoe crabs as well as a transition by the pharmaceutical industry to a synthetic alternative to the animal’s blood for medical testing. The resolution was approved by NWF and its 53 state and territorial affiliates.